Greece’s main free-market think tank, the Center for Liberal Studies (KEFiM), published its annual Tax Freedom Day study (TFD) last week. The study shows that the average Greek will have to work until July 22 in order to earn enough to pay for their 2017 taxes, and projects that Greece will end up with the third-highest Tax Freedom Day in the EU, after France and Belgium.

The evolution of Greek Tax Freedom Day since 2006

KEFiM’s study explores the evolution of taxation (including social contributions, direct, indirect, employment, and capital gains taxes) since 2006. Back then, Tax Freedom Day was in late May, two whole months earlier than in 2017. Every year, with the exception of 2009, the most important date of the year has moved further down the glorious Greek summer. It is no wonder that the current government coalition’s approval numbers are suffering and the election polls show them trailing by 10-16% (depending on the poll) to the center-Right party.

The 15-day increase from last year comes entirely from social contributions that skyrocketed after the current government passed a law described as an “assault” on self-employed workers and small businesses.

Since the start of the Greek crisis there have been two great misunderstandings: Greeks don’t pay taxes, and the Greek crisis was caused by austerity. In reality, the productive part of society bears a tremendous additional burden that covers not only the cost of tax evasion but also a bankrupt pension system and the public sector’s generous compensation schemes.

By looking at this study, it’s easy to realize that, before the crisis, Greeks paid more or less the same amount of taxes as most European taxpayers. The deficits and the accumulation of public debt, combined with the post-crisis policy mix that relied primarily on tax hikes, is what led Greece to lose more than 25% of its GDP since 2008 – and that was clearly the result of government spending, not of low taxation.

The timing of the study’s release was perfect – the scheduled press conference was just a few days before the tax filing deadline and in the midst of general discontent about the high taxes levied by the radical Left-far Right governing coalition. The news of the 15-day extension of Tax Freedom Day since last year (July 6) gathered enormous media attention including multiple newspaper front pages and headlines, featured segments on evening television news shows, and dozens of online articles. All of them agreed that Greek taxpayers are paying too much for the minimal returns their government offers. 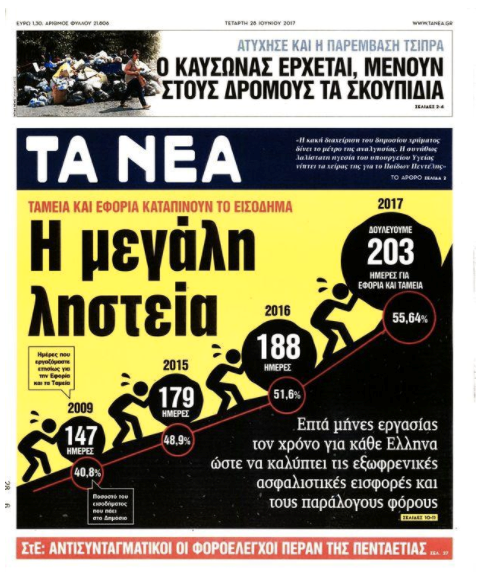 During the TFD presentation, one of the study’s editors, Miranda Xafa – a former IMF Board Member and a member KEFiM’s Academic Board – explained that, for certain earners, Tax Freedom Day is far worse than the average of 203 days: “A private contractor might end up paying anywhere from 60% to 82% of their gross income in taxes. It’s a return to policies of the 70s, before the Thatcher and Reagan Revolution.”

Adonis Georgiadis, Vice-President of the center-Right party Nea Dimokratia (New Democracy), pledged to keep participating in the annual presentation of the Tax Freedom Day study because “it is the most important news story that concerns all of us.” He added that “it should be our national goal to reverse TFD’s  trend” and hoped to return congratulated for reducing the government’s burden “by a day, a week, or a month” once his party is in power.

In the aftermath of the press conference, the entirety of the non-Leftist Greek press showed a tremendous interest in the study. Of course, the national media were not the only ones that picked up the story. A local television channel from the beautiful island of Crete took the news to the streets and recorded people’s reactions. “They have crushed all of our businesses, this can’t go on,” a young entrepreneur said upon hearing the new TFD date. “We work all day and the government takes 80% of our income, that’s why many people turn to the unreported labor market,” said another young Greek worker.

Let us hope that as more Greeks learn about the true burden of their government, they will give free markets, the rule of law, and limited government their first chance to transform Greece from statism’s poster-child to a case study of successful reform. The latest signs from the public allow for some cautious optimism.

Alexander Skouras is the incoming President of the Center for Liberal Studies. He currently is the Director of External Relations at the Atlas Network.