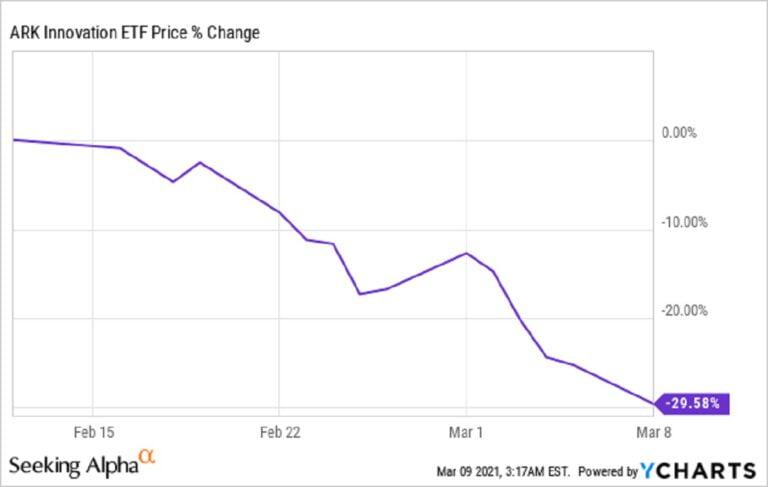 The contrast between Tesla (TSLA) shares and Tesla's CEO on Monday was striking. Elon Musk started the day tweeting a literal picture of optimism: he, his youngest son, and her mother posing at the site of his future city, Starbase, Texas. Then Tesla shares sunk almost another six percent, their 5th consecutive down day.

Ark Of A Diver

Musk's optimism was mirrored by Cathie Wood, who made the media rounds on Monday talking about her flagship Ark Innovation ETF (ARKK), and its top holding Tesla. ARKK shares had dived about 30% since their February high.

Bloomberg TV gave Cathie a few minutes on the air, but posted her full interview with Emily Chang on YouTube.

Musk tweeted recently that Tesla would be making a beta version of full self-driving capability available to its customers in about ten days, but subsequently qualified his prediction, citing the prospect of internal and regulatory delays.

Due to high levels of demand for FSD Beta, adding “Download Beta” button to Service section of car display in ~10 days https://t.co/D6M3ZiMarG

Every day the market is open, our system analyzes the 4,500+ stocks and ETFs with options traded on them in the U.S. It starts by assuming their returns will revert to historic means, and then it tests that assumption by gauging options market sentiment on each one. On Monday, despite its ~6% drop, Tesla was our #1 name.

Although our system doesn't take into account any macro themes when doing its analysis, you can see some impact of the market's rotation in Monday's top ten. The VanEck Vectors Oil Services ETF (OIH) at #2 reflects the reflation trade in energy, and United Continental (UAL), Carnival (CCL), and Norwegian Cruise Lines (NCLH) reflect the post-COVID reopening trade.

In addition to Tesla, another of our top ten names from Monday is a Cathie Wood holding,  Sea, Ltd (SE). She added to her position in SE on Monday. Although it didn't appear in our top ten on Monday, another name we're bullish on that's an Ark holding as well is Square (SQ). We wrote about how it could be a picks & shovels play on the nascent boom in NFTs recently (Not Just A Blockchain Bubble).

A conservative portfolio including Tesla may sound like an oxymoron, but "conservative" seems an accurate description of a portfolio where your worst case scenario is a single-digit decline. Here's an example of one from Monday.

Say you had $1,000,000 to put to work on Monday and you were unwilling to risk a decline of more than 9% over the next six months. This is what you would have entered on our site.

A few moments later, this is the portfolio our site would have presented you.

Most of the underlying securities in that portfolio are there because they were on our top names list on Monday.

Our system started with roughly equal dollar amounts of each, and then rounded them down to round lots, to reduce hedging costs. It swept up most of the leftover cash from the rounding-down process into a tightly collared position in First Majestic Silver (AG) to further reduce hedging cost.

On our website, if you click the plus signs in the portfolio above, the positions expand to give you a better look at the hedges. For example, this is what the Tesla position looked like expanded.

Our system hedged Tesla with an optimal collar. In this portfolio, all the positions were hedged with optimal collars. Our system estimates returns hedging with both optimal collars and optimal puts to determine which type of hedge is best. We elaborated on that process in a recent post: When To Hedge With Puts Versus Collars.

The Range Of Possible Returns

The max drawdown is the worst case scenario of that portfolio: a decline of 8.54% over the next six months. That's how much this portfolio would be down if all of its underlying securities went to zero before then.

The net potential return is a bullish estimate of the return, net of hedging cost: 13.64% in this case.

Taking into account the average difference between the actual returns of our top names and our return estimates beforehand, the expected return here is 4.75% over six months.

Want A Shot At A Higher Return?

Take a bit more risk. If you entered the same dollar amount on Monday, but indicated you were willing to risk a 20% drop over the next six months, the resulting portfolio would have had a bullish scenario of a 30% gain and an expected return of more than 12% over that time frame, instead of 4.75%. If that sounds unrealistic, consider the return of this hedged portfolio that wrapped up a couple of weeks ago.