Using data from Preqin’s online platform, we detail the preferences and interests of each different investor type active in hedge funds to fully understand how to approach investors in 2018.

Preqin estimates that institutional investors allocate $2.06tn to hedge funds, approximately 58% of all capital invested in the industry today. In capital terms this is the highest level Preqin has recorded; however, the level has fallen proportionally from highs in 2013 as institutional inflows have slowed in a period of growing appetite from private sources of wealth and retail clients. Nevertheless, gaining interest from institutional investors, with their long-term investment horizons and “sticky” capital, can be vital to the long-term development of a hedge fund business. However, under the umbrella of “institutional investor” fall many different types of institutions with different sets of challenges and portfolio needs that hedge funds help to solve. Therefore, gaining insight into the differences between types of investors – both on a macro level and an individual basis – is an important step towards securing capital from these investors. 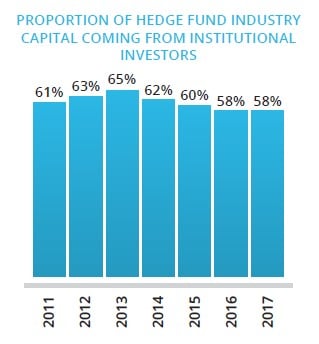 In this section we examine these allocators in more detail, based on data taken from Preqin’s online platform, to help you understand the needs of institutions in 2018 and really “Know Your Investor”.

Much of the increase in capital coming from public pension funds continues to be driven by new schemes making their first investments in the asset class, particularly as new regions open up to the possibility of hedge fund investment. Recent relaxation of regulations in South Korea, for instance, has led to investors such as National Pension Service making their first investments; others including Yellow Umbrella Mutual Aid Fund have begun to consider investment for the first time. Although the average allocation to hedge funds by public pension funds has remained stable since 2016 (at 7.9% of assets under management [AUM], Fig. 5), we have noted broader changes to their investment portfolios.

Small in number, but mighty in influence, sovereign wealth funds are a vital part of the institutional investor landscape
in the hedge fund industry. This group of 24 represents 10% of all institutional capital invested in hedge funds (Fig. 2), a proportion equal to endowment plans, of which there are over 25x more in number investing in hedge funds.

Sovereign wealth funds have, on average, increased their portfolio exposure over the course of 2017. As at December 2017, the average sovereign wealth fund invests 8.2% of its assets in hedge funds, compared to 7.0% at the same time in 2016 (Fig. 5).

The average sovereign wealth fund has been investing in the asset class for 13 years; however, given the size of sovereign wealth funds and the complexity of their portfolios, the majority of this group prefer to outsource at least some of the fund selection duties to funds of hedge funds.

Sovereign wealth funds offer the potential to be long-term partners with hedge funds; they will consider funds with a longer lockup than the typical institutional hedge fund investor, with a mean maximum lock-up period of 33 months (Fig. 3), four months longer than endowment plans’ 29 months. Despite their tolerance for more illiquid strategies, which can offer a performance premium, sovereign wealth funds target lower returns than other institutional investor types (Fig. 4). This indicates that this group accesses the asset class for diversification and a source of alpha with low volatility over long periods, rather than just for high returns.

Endowment plans have amassed a sizeable exposure to hedge funds, with an average of 19.2% of total assets invested in hedge funds as at December 2017, a small increase from 19.0% at the same time in 2016 (Fig. 5). In fact, this group has typically invested between 18.5% and 20% of their portfolios in hedge funds since 2008, and have therefore rebalanced their portfolios over 2017, on average, in favour of a higher preferred exposure. As seasoned investors in the hedge fund space, with larger portions of their portfolios dedicated to investment in the asset class, a larger proportion (37%) of this group favour direct investment in funds compared to most other types of institutional investors (Fig. 6).

The nature of endowment plans, which are often able to adopt strategic, stable portfolios with less need for drawdowns during periods of market volatility, allows them to accept longer lock-up periods than many investors (Fig. 3). In turn, they tend to have relatively high return expectations (Fig. 4), and are willing to lock up capital for longer provided the quality of the returns compensates for such illiquidity.

Nearly two-thirds of foundations allocate capital to the hedge fund space. This group accounts for 18% of investors in hedge funds by number (Fig. 1), yet only 10% of institutional capital invested in the asset class (Fig. 2). Although their relative contribution in monetary terms is smaller than their prominence in number, foundations have been growing their average exposure to hedge funds over the last several years, from 15.6% of total assets in 2013 to 18.9% in 2017, an allocation lower only than that of endowment plans (Fig. 5).

Foundations represent a variety of institutions that use hedge funds to help protect assets for many different pursuits, including funding scientific research, providing health services or funding religious or charitable endeavours. Each foundation will have its own needs from hedge funds driven by its own particular aims and requirements for its portfolio. As a result, foundations are split in their approach to investment in hedge funds. The most favoured route to hedge fund exposure (by 40% of investors) is a combination of funds of hedge funds and direct investment (Fig. 6). However, 35% and 25% will just invest directly in hedge funds or solely in funds of hedge funds respectively.

Even though insurance companies have relatively small allocations to hedge funds, in terms of the proportion of total assets invested in the sector, this can translate to relatively large amounts in terms of capital. Insurance companies represent 4% of all institutional investors active in hedge funds by number (Fig. 1) and 7% of institutional capital invested (Fig. 2).

Insurance companies seek higher levels of liquidity in comparison to some other groups of institutions, accepting lock-up periods of no longer than 20 months, on average (Fig. 3). Despite this, they also have relatively high return demands, seeking an average annualized return of 6.8% (Fig. 4). In order to achieve these higher returns, almost half (46%) of insurance companies allocate to hedge funds via direct investments only (Fig. 6).

Hedge funds have become an important part of the portfolios of many institutional investors. Currently, nearly 5,300 institutions allocate capital to the asset class, a number we have seen grow significantly over the past decade, as investors sought out hedge funds following the GFC in an extended low interest rate environment. Today, the hedge fund industry has more than $3.55tn in AUM, and allocations from institutional investors combined represent 58% of these assets. Therefore, the influx of capital from institutions – such as pension funds, sovereign wealth funds, endowment plans, foundations and insurance companies – has been instrumental in shaping the industry we see today. And the industry will continue to evolve as this influential group of institutions grows, both in terms of the size of their portfolios as well as in investment sophistication. For instance, we see the increasing appetite for new strategies and changing needs leading to innovations in the hedge fund space, resulting in products such as alternative risk premia gaining attention.

There are clear differences in the appetite for hedge funds between the groups of investors tracked by Preqin, as our analysis shows. In addition to this, each of the investors tracked by Preqin will have its own individual needs and requirements. Therefore, with institutions’ needs continuing to change and appetite for the asset class returning, it is more important than ever for fund managers to truly know their investors.