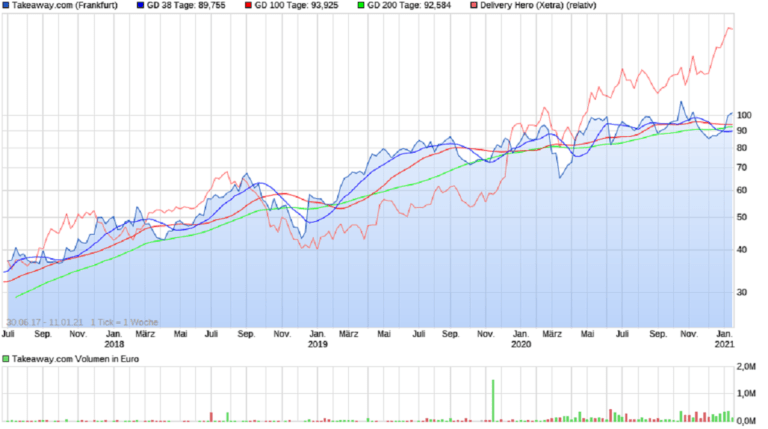 Health Warning: This is not investment advise. PLEASE DO YOUR OWN RESEARCH !!!!!

Just Eat Takeaway.com or “JET” is another of these stocks that popped up from different “high quality” sources. A few friends mentioned the stock, most recently Swen Lorenz featured JET (behind paywall). By coincidence I am also a relatively happy user of their service, especially since the lock downs started.

A good starting point for an analysis is this write-up from a US based 2 bn USD hedgefund called “Catrock” which has invested ~30% of its NAV into JET and not surprisingly is very bullish. therefore I will only describe here what I find important.

Just Eat Takeaway.com or “JET” is the leading European Food delivery market place. The company was founded in the Netherlands in 2000 but especially in the last 2-3 years they managed to consolidate the market mainly in Europe and also in Canada to become the biggest player in a couple of mostly European countries such as Germany, UK, Netherlands, Poland, Spain, Italy and Canada. In 2020 finally they managed to take over US player GrubHub and added the US into their portfolio. This frantic deal making can be seen in this graph from their website:

Just EAT Takeaway.com “mostly” offers a market place model where users can select a restaurant and order meals but the logistics is fully in the control of the restaurant. In contrast, companies like Doordash or Uber Eats are running the logistics themselves.

The advantage of being “Only” a two sided market place is clear: One doesn’t need to deal with how to incentivise and steer drivers. This part is one of the biggest issues in ride hailing, including the question if drivers are employees or not. The disadvantage is that the market place doesn’t control the “full experience to the doorstep” and can only access restaurants with existing delivery operations.

From a restaurant perspective, the biggest difference is clearly that in order to participate on a pure marketplace, you need to have your own delivery service. If you don’t have that, you might rather go with a service that includes logistics.

One of the specifics of a food delivery platform is that similar to taxis, these platforms are  “Local marketplaces”. Both, the supplier and the buyer need a physical proximity as delivering a meal via DHL or UPS over wider distances  doesn’t make sense. Ebay for instance is a international market place. A buyer can order from a seller who is located anywhere. This means that competitive advantages are mostly restricted to specific metropolitan area and makes it potentially easier for a competitor to enter a market because they can do this gradually city by city to see if and how a market entry works. This could be seen nicely pre Covid-19 in ride hailing where for instance London became a battle ground for a couple of players trying their luck.

Another example is Berlin, where Finland based Volt has just entered after JET had kicked out or taken over all other competitors in 2018.

Another aspect of a “Local marketplace” is that it works best in relatively densly populated metropolitan areas and the app is able to aggregate a big enough amount of choices in its market place. In  a small town with maybe 2-3 restaurants, you don’t need an app.

Interestingly, Just EAT Takeaway.com runs a small logistic service named Scoober for Restaurants without own delivery, however that seems to be rather a “hedge” for them than an integral part of their offering.

JET is clearly NOT a “Tech company”, as the app as such is not that “high tech”. The value of the model clearly depends on being the leading market place with the right incentives to keep everyone on the market place.

Covid-19 had a significant effect on both sides of the market place. Restaurants that saw their premises being closed needed to find new revenue sources, customers needed to find a replacement for going to restaurants or a work canteen. Obviously from a customer perspective, there are substitutes like meal kits, cooking or frozen pizzas or just call your favorite restaurant directly. However from a customer perspective there is clearly a value in have in choice and convenience. I wouldn’t want to have 10 different menus in my house, try to get through during lunchtime etc. etc. JET clearly benefited from that trend, although not to the same extent in all markets

Founder and CEO Jitse Groen still owns (x%) of the company. Groen is a very interesting character and not the “adam Neumann” or “Elon Musk” type. He is only 40 years old and comes across quite humble for a self made billionaire. He paid himself 700k salary in 2019 which is pretty ok. Here is a recent interview:

One of the interesting aspects is that Groen is able to do deals in a relatively friendly way and seems to be able to retain key persons of the target company.

The Supervisory Board at first sight looks like a high quality board and not just some friends of the founder.

The biggest shareholders (pre GrubHub deal) are Jitse Groen (10,3%) and Delivery Hero from its swap of the German bsuiness (10%). Catrock owns 5%. AKO capital, another long term “high quality growth” investor owns 3% and it seems to be their 3rd largest position.

Kudos to Swen Lorenz who mentioned the “extra assets” Just EAT Takeaway.com has on its balance sheet. The most valuable is clearly their 33% stake in Brazilian market leader Ifood which last year was rumored to be worth up to 1 bn USD. Majority owner Prosus (Naspers) seems to be keen to buy Takeaway.com out. Such a transaction could be a small catalyst if and when it happens. Naspers in principle could be also one of these players who, at some point, might be interested in making a move on JET or maybe UBER or maybe Doordash with their insane valuation.

There are clearly a couple of issues which might explain the current valuation such as:

At the time of writing, JET was valued at around 14 bn EUR with very little debt. However, one needs already to incorporate Grubhub, for which JET made an offer in 2020 for an all share deal. This adds another ~7.7 bn USD in EV.

Just EAT Takeaway.com clearly is not “Cheap”. Yes, you can compare it with overvalued stocks like Doordash then it looks relatively cheap but what I want to know is the following: Can I earn my required rate of return in a “reasonable” scenario ? For this I prefer a simple bottom up analysis.

This requires 2 inputs:  A reasonable scenario (based on some assumptions) and my required rate of return. As JET is clearly a relatively risky stock compared to my existing portfolio, I would require something like 15-20% on an annual basis for some period of time to make it attractive.

My “reasonable scenario” bases on the following assumption:

This results in a total projected EBITDA of around 3 bn EUR in year 7. If I further assume zero value for GrubHub and zero value for Ifood and all non No1 markets, this would give me a 17% return p.a.

As a sanity check, my assumptions would require them to have 4,4 mn clients in Germany in 7 years generating 230 mn orders, which is an implicit growth rate of around 13% p.a., for the Netherlands it would around 10% required growth but for instance for Canada 29%. Not that easy but also not totally unrealistic.

Adding some value for Grubhub, Ifood and the other markets I come actually pretty close to my 20% requirement.

Now I could make things very complicated and try to incorporate other stuff but for me as a rule of thumb it always worked when my initial realistic scenario produces the required return without needing to tweak the model, then the risk/return of the investment should be OK.

Is this a GARP stock ? Right now, based on 2020 numbers clearly not but based on 2021 numbers, I think the stock is clearly better value than many high flying investor darlings and in the long run it could turn out to be quite cheap.

A quick look at the chart shows that despite showing a decent uptrend, Just EAT Takeaway.com has not increased much in 2020 despite the clear tailwinds from Covid-19:

However it is interesting to see how Delivery Hero, which is basically the EM version of JET has done a lot better in 2020 which might indicate that JET has some catching up to do.

As always a summary at this stage on what is good and not so good.

+ potentially long growth runway due to shifts in consumer behavior

– risky US expansion via GrubHub deal

– substantial integration effort still to be made after “Roll up”

I will start relatively small with a 2% position that I was able top buy last week for and average of ~93 ER per share.

My main focus areas will be to check how Grub Hub develops, how much market share they lose in UK and if growth rates remain in my target corridor especially starting with Q2 2021. If this is the case, I would gradually add to the position. If GrubHub for instance turns into a loss(negative CF situation or a competitor would launch a full scale attack in several markets, I would rather sell sooner than later.

For the time being it is more an “opportunistic” investment. JET is expected to post first 2020 numbers on January 13th, the stock could become volatile in the next days.

As my cash percentage is now too low for my personal preference at around 7%, I started selling some shares of Naked Wine (0,5% of Portfolio) and Siemens Energy (0,5%) and will also sell smaller amount of other “high beta” stocks in my portfolio to fund this investment and keep cash closer to 10%. This is clearly a risky investment and I will need to make sure that my share of potentially volatile stocks is within my risk appetite limits.

Article by Value And Opportunity