Samsung revealed its Galaxy Fold just last week, but it already has some fierce competition in the new foldable smartphone category. Huawei unveiled its Mate X at the Mobile World Congress on Sunday. The two handsets do share a few things in common, but not much, so you’re probably wondering how the Huawei Mate X stacks up to Samsung’s Galaxy Fold.

The Huawei Mate X vs. the Galaxy Fold

While neither Samsung nor Huawei was the first to launch a foldable smartphone, the two companies will be the first to make folding smartphones available to the general public. As a result, the designs of these two folding phones differ significantly. The most noticeable differences are in how they utilize their screen space.

Both the Huawei Mate X and the Galaxy Fold are smartphones with displays that fold out to be the size of a tablet. However, the two devices utilize their folding screens differently. The Fold has one display on the outside, while the bigger display is tucked away inside the device. The Mate X also has a single display on the outside, but the exterior screen is more versatile because it can be used in three different ways, depending on how the device is held.

The Galaxy Fold bends like a book and sports a 4.6-inch display on the outside and a 7.3-inch tablet screen on the inside. The Mate X, on the other hand, features an 8-inch wraparound screen which folds out rather than in like its Samsung competitor. When the handset is folded, it looks like a smartphone with two screens, and when it’s unfolded, you have a nearly-square tablet with very thin bezels. Huawei’s three displays measure 6.6 inches, 6.4 inches and 8 inches (when unfolded).

The hinges on the two devices are quite different as well. The Huawei Mate X folds out flat, courtesy of the company’s patented “Falcon Wing” hinge technology. However, Samsung’s Galaxy Fold can’t be laid totally flat. Additionally, many people have noted that Samsung’s phone has a very small gap at the hinge, while Huawei’s does not.

One other noticeable difference in the Huawei Mate X vs. Galaxy Fold comparison is how the cameras are housed. The Fold features a notch similar to the one made popular by the iPhone X, although much larger. Inside the notch on the 7.3-inch display is a pair of camera lenses and sensors. However, Huawei’s foldable smartphone doesn’t have a notch. Instead, it sports more of an ergonomic design with a bump on the back and a strip which houses the camera lenses.

Huawei’s phone has a total of four lenses, but the company didn’t share a lot of specs about the device’s cameras, except to say that they will be “on par” with the cameras on the Mate 20 Pro.

The Mate X will start at €2,300 in Europe, which would be about US$2,600, although we don’t expect to see the phone on sale in the U.S., given Washington’s tough stance on the Chinese company. The Galaxy Fold will start at $1,980. 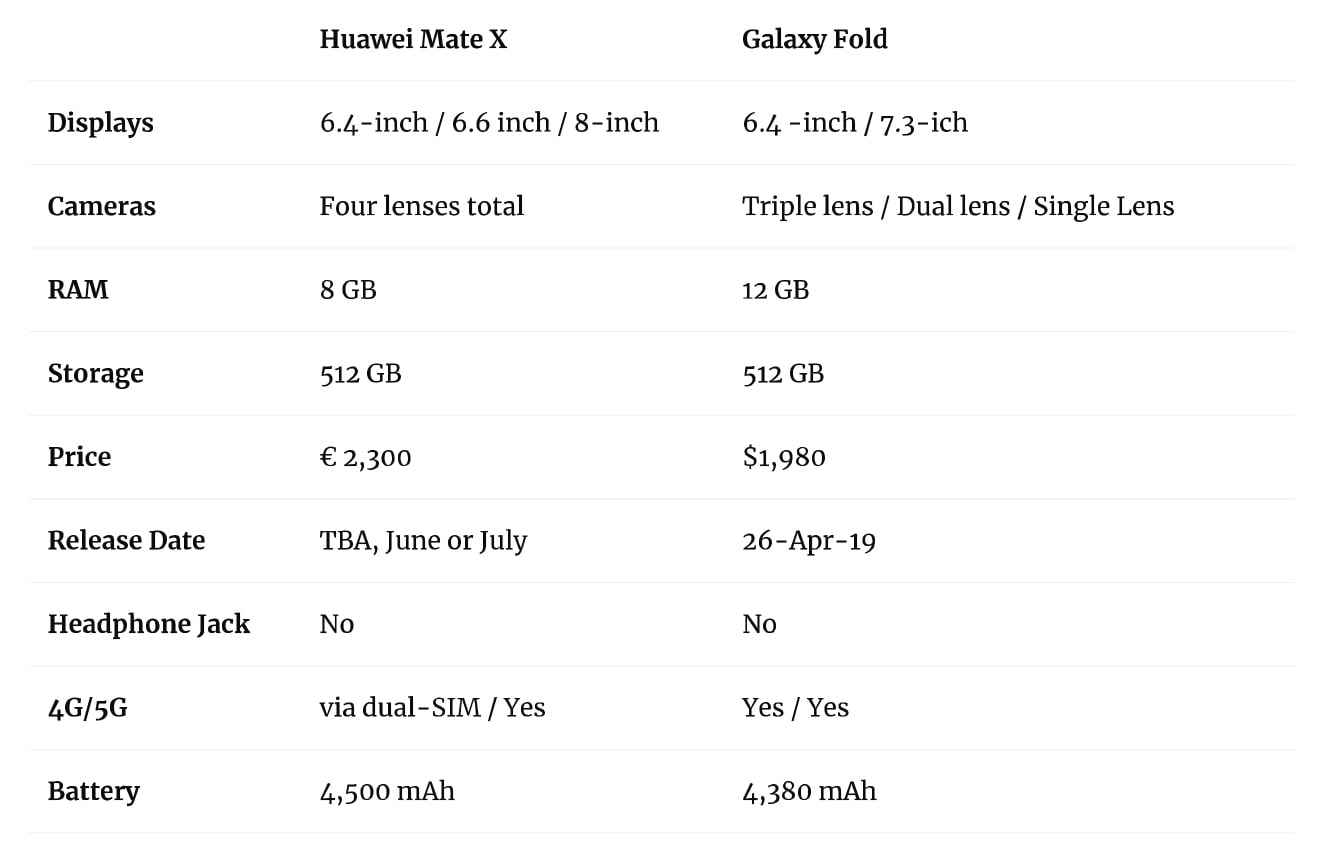