Investing can be tricky, especially since there are so many different types of investments people can make. Whether someone wants to invest in stocks, mutual funds, gold and precious metals, real estate, or something else, a great deal of research should be conducted before deciding the best option for you. How the pandemic affects these investments needs to be considered as well.

Commodity.com released a new study to look at how the value of gold has stacked up against other precious metals, stock market indices, and real estate investments. It also analyzed how all of these have responded to the COVID-19 pandemic and other market recessions. Here are some of the results.

The study analyzed the annual average value of gold per troy ounce from 1992 through May 2020. A troy ounce is a metric in which precious metals are weighed, and it’s equal to about 31.1 grams, compared to a standard ounce that weighs 28.35 grams.

During this period, U.S. economic recessions were compared against one another to see when gold was the most valuable during times of crisis. Gold had the highest value in 2013 ($1,882 per troy ounce), five years after the economic crash of 2008. During the Great Recession of 2008, gold’s annual average closing price was just $1,050.

But thus far during the COVID-19 pandemic, gold’s value has not dropped as substantially as expected. According to the study, gold’s annual average closing price so far in 2020 is approximately $1,630.

Over this nearly 20-year period, gold was the lowest value during the 2001 recession, where gold was only worth approximately $400 per troy ounce.

Gold vs. Other Precious Metals

The study compared gold against palladium, platinum, and silver to see which precious metal holds its value best. According to the numbers analyzed, and while the cost of gold had been steadily climbing since 2018, there was one precious metal giving gold a run for its money.

Over the past three years, palladium’s annual average closing price began at approximately $1,050 and jumped to $2,200 per troy ounce . The research revealed that no other metal is valued as high as palladium so far this year. Gold ranks second with a value of just over $1,600, while platinum has a value of about $850. Silver was assessed at the lowest cost of under $20 per troy ounce. 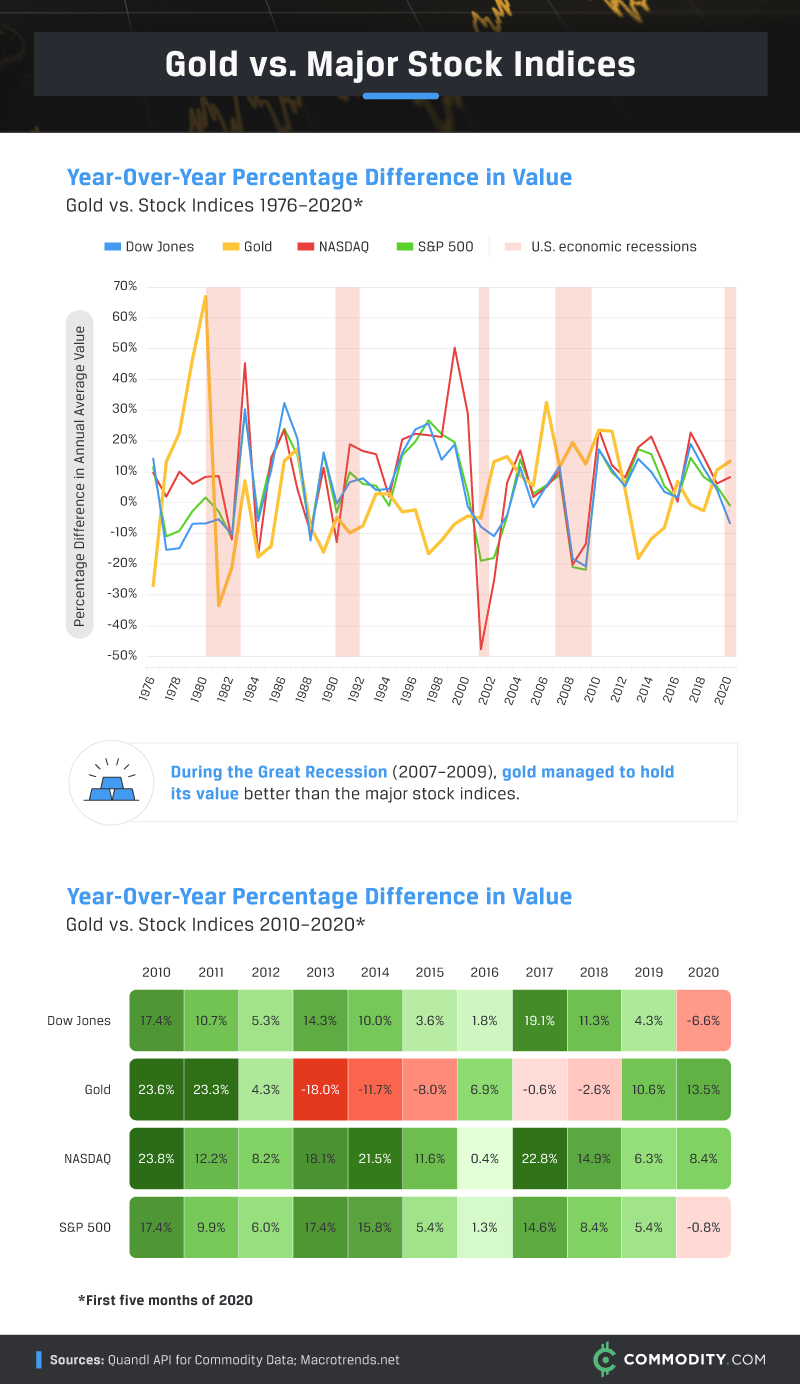 So how does gold compare against major stocks? The stock indices compared against gold were Dow Jones, NASDAQ, and the S&P 500.

During the Great Recession from 2007 to 2009, gold managed to better hold its value than most major stock indices. While stock from all indices was down approximately 20%, the value of gold rose by about 20%.

In five of the past nine years, the typical single-family home saw a higher year-over-year percentage increase in sale price than gold’s value. The most significant difference occurred in 2011 when gold’s value increased 23.25%, while real estate dropped 5.5%.

The value of real estate was pretty consistent over the time frame assessed; gold’s value fluctuated more frequently. In four of the nine years compared, gold had a negative value, while the housing market only dropped that low once.

So how did the pandemic affect types of investments? As far as precious metals go, gold (1.2%) was the only one that had a positive value in March, while the rest – palladium (-7%), platinum (-16%), and silver (-14%) – all lost value. When April began, all of the metals but palladium saw an increase in value. By May, all precious metals were in the green.

Stock prices went down in February and March, but when April came, values rose by at least twice as much as gold’s. May percentages leveled out to about even.

While some investments seem to ebb and flow, gold tends to be a consistent entity to invest in. It remains more constant throughout the years than most stocks and generally performs better than most precious metals. So when trying to decide on a solid investment, gold should remain something of consideration.