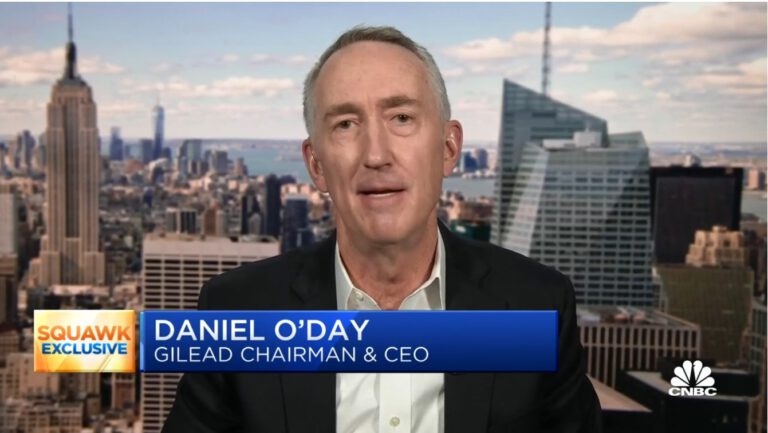 MEG TIRRELL: Dan, thanks for being with us this morning. Let's start with your news of the day. You raised your guidance for the full year now because of your Remdesivir sales looking at now $2.83 billion. Tell us about this guidance raise, and unfortunately I'm afraid what it means for the path of the pandemic so far.

DANIEL O’DAY: Yeah that's right Meg. So, I mean obviously revenues are important. We've invested a lot in Remdesivir and we'll continue to invest in Remdesivir. But I think the really important news here is the impact for patients in hospital systems. So we know obviously that hospitalizations have quadrupled since October, and we're just learning now that you know one out of every two patients in the hospital, are receiving Remdesivir, which is really important because as you know that reduces the hospital stays by up to a week. It also reduces the chances of patients going on to more severe illness and dying by 70% if it's given early in the hospital. So these are really important benefits for patients and, really, I know the colleagues and I at Gilead are very pleased. This is one piece of the puzzle in helping with the pandemic. And we're certainly not done. We're continuing to invest in Remdesivir earlier in the lines of therapy, and in combination with other medicines to help patients and healthcare systems.

TIRRELL: Tell us about what data we should be expecting next and when? And also, the inhalable form of Remdesivir – is that still a priority for you guys and when should we expect to hear about those data?

O’DAY: Right, well we have 40 ongoing clinical trials right now with Remdesivir. And as you know, Remdesivir stops the replication of the virus. So it's most effective if it's given even earlier in the course of hospitalization and illness. So we have studies right now looking at could we even take this medicine outside the hospital in an outpatient setting with three IV infusions or with an inhaled version. We'll expect to see data on that in the coming months in 2021, but also later in the stages of the disease where we know the inflammatory process actually creates bigger issues for patients. You know, we know today that, you know, in the hospital Remdesivir is being used in combination for those later stage patients with Dexamethasone, you know, a steroid, and we're looking at combinations, also with the antibody medicines to find the best way to improve the outcome for patients. So all of those 40 trials are ongoing and you're going to see a lot of that coming now in 2021. We're firmly committed. We understand, I mean, the burden this pandemic is causing to society to patients and their families and our scientists and team at Gilead, and frankly, the industry – I'm so impressed by the industry response here with vaccines and therapeutics all coming together to end this pandemic.

TIRRELL: We were just talking with BioNTech CEO about the potential for these new strains of the virus to affects the vaccines. How are you looking at that in terms of an antiviral drug like Remdesivir, what kind of surveillance systems do you have, are you assured that Remdesivir still works the same way against the variants that have been identified.

O’DAY: That's a really important question. And you know, what we know is that Remdesivir works at the cost, the source in the cell where the virus replicates and what we know is in these new variants, that part of the cell is not changing at all in fact so we fully expect Remdesivir to be effective against these new strains of course we're doing the testing we've already tested Remdesivir in more than 2,000 different variants in the lab and it maintains its effectiveness. You know, I equate it a little bit Meg to Tamiflu, another medicine that was discovered by Gilead Sciences and as you know for two decades now Tamiflu continues to work against many different strains of the influenza virus from season to season, where the vaccine of course has to alter and change because of the way that it works on the virus. So, I think there's a lot of parallels here between the ways that antivirals work versus the antibody drugs and vaccines and so I expect Remdesivir with these variants will continue to make an impact on patients.

TIRRELL: Well mentioning Tamiflu sort of reminds us that Gilead has this long history and expertise in antiviral drugs. I wonder as you look at the landscape of research in this space against COVID, it's been really interesting to see you know Remdesivir was the first drug approved for this disease. We haven't seen a lot of other successful antivirals so far developed. Why do you think that's taken longer and does Gilad see anything interesting out there that either you might consider in licensing or taking into the company or that you might consider a competitor.

O’DAY: Well, I don't think there's any competitors in this field. We're all, we're all working together to find different ways to have an even greater impact on this virus. And what I can say is, you know, two decades of experience on antivirals at Gilead, it's one of the most impressive things I've seen at Gilead to see this level and depth of expertise, you know, I mean this is the same company that turned HIV into a chronic illness that cured Hepatitis C. So, these scientists understand very well that oftentimes you need a combination of approaches to get truly sustained responses. So we're, our scientists are working on that both inside the company and collaborating with other companies that have different technologies to look for ways to have an even greater impact upon the disease and I can, I can tell you, Meg we won't rest until frankly HIV is cured, until we cure for other forms of hepatitis and until we are able to also cure coronavirus so, a lot, a lot of work on that but what I would say is the company equally now is taking that same level of scientific expertise into new fields of high, really high medical need, including cancer, I mean we now have a portfolio of cancer medicines that is second to none and I spent three decades with one of the top cancer companies. I really am impressed by the work we're doing to extend the lives of patients living with cancer including a really difficult. cancer like triple-negative breast cancer, we're seeing a doubling of survival with our medicine, Trodelvy. So we're gonna continue to focus on these high medical needs both in antivirals and also in other therapeutic areas like cancer.

TIRRELL: You know, it's interesting to see how Gilead is sort of shifting its pipeline and I wanted to ask you just also about the news today with your, your forecast whereas obviously Remdesivir sales are higher, you are seeing an impact in being able to start treatment to with prep to prevent HIV and also to treat people for Hepatitis C, how are you seeing that evolve throughout the pandemic, the ability for people to start getting this important care.

O’DAY: Well look, you know, we feel the needs of patients out there. Obviously with a pandemic, the ability to access your physicians and the healthcare system has been hampered I mean systems have had to pivot to focus on COVID and rightfully so and I think coming out of this pandemic, we're going to see even greater needs in some of those areas like HIV and like cancer. And that's again why I'm so pleased that the company and frankly the industry has been able to do two things at once, yes we're focusing and putting tremendous amount of efforts in ending the epidemic, but we haven't taken our eye off the ball of, of moving to the next stage of medicines for patients with other devastating and debilitating illnesses. I can give one example, back to our HIV leadership which is, you know, we have medicine that you know one pill once a day for treatment and also for the prevention of HIV. We've last year, you know, we provided some data on an ability to think about moving that to once every six months with a subcutaneous injection. And we know that would make a big impact on ending the HIV epidemic. So, you know, there's a lot going on here Meg and there's a great patient need coming out of this epidemic that we have to be ready for and I'm proud to say that we will be ready for that.

TIRRELL: All right, Dan O'Day, thank you so much for joining us. We look forward to hearing about those updates.