The gold price remains above $1,670 an ounce, although it did trade as high as $1,688 an ounce early this morning. The gold rally has been driven by increased fears about the possibility of a global coronavirus epidemic as the number of cases outside China grows.

Not everyone is convinced the gold rally will last, however. Capital Economics analysts have been saying for quite some time that they don’t expect the gold price to keep rising throughout the year.

In a note dated Feb. 19, they disagreed with the widely held view of more interest rate cuts this year. They believe the Federal Reserve won’t cut rates anymore this year. And they predict that the gold rally will end soon.

They noted that the S&P 500 was still relatively close to the all-time high hit one week ago, although it has declined significantly today. They also pointed out that there have been times when the gold price and the S&P 500 move in step together, even though they are usually negatively correlated. 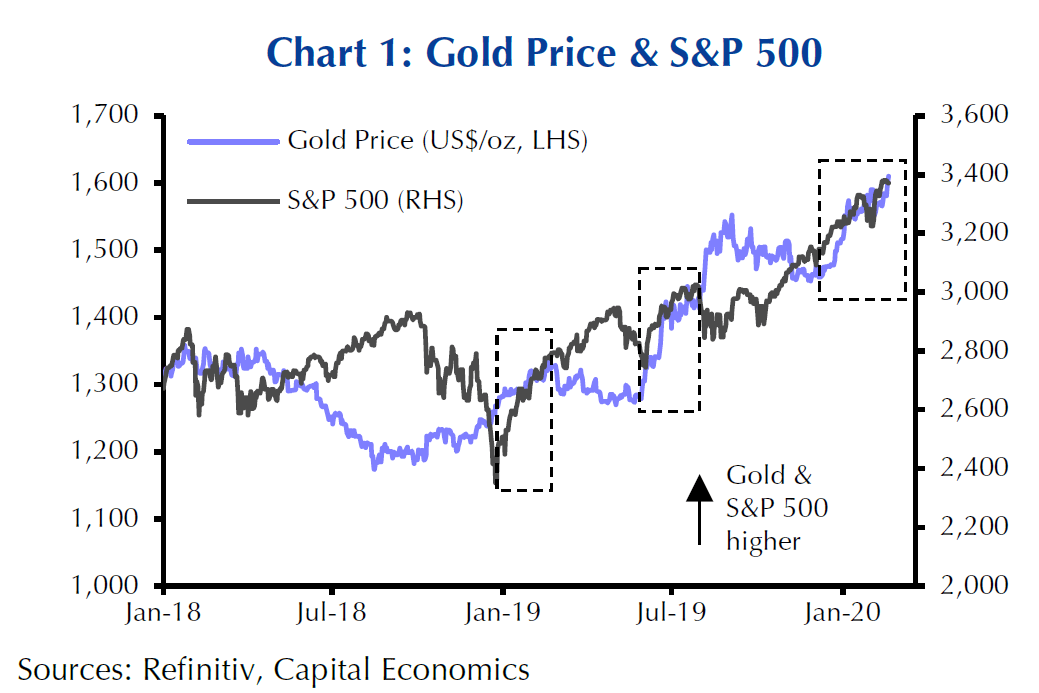 Thus, they said that even though the gold price and stocks were rallying together, it wasn’t a mixed signal about the health of the global economy. They said the reason both assets were rallying was because both were being driven by expectations of loosening Fed policy.

They also argued that the gold rally was surprising because at the time they wrote their note, it looked like the coronavirus was starting to be contained. That has changed since they wrote their report, however. Fears about the spread of the virus outside China have reignited the gold price, pushing it higher and higher while stock indices plunge.

Capital Economics analysts also noted that real bond yields in the U.S. tumbled “well below zero” because investors have lowered their expectations for interest rates in a year by 20 basis points since Jan. 20. They said investors expect the Fed to respond the same way as the People’s Bank of China, which is by lowering rates.

Thus, they believe the decline in real bond yields has also been helping to drive the gold rally, given that the yellow metal typically benefits from lower real yields. 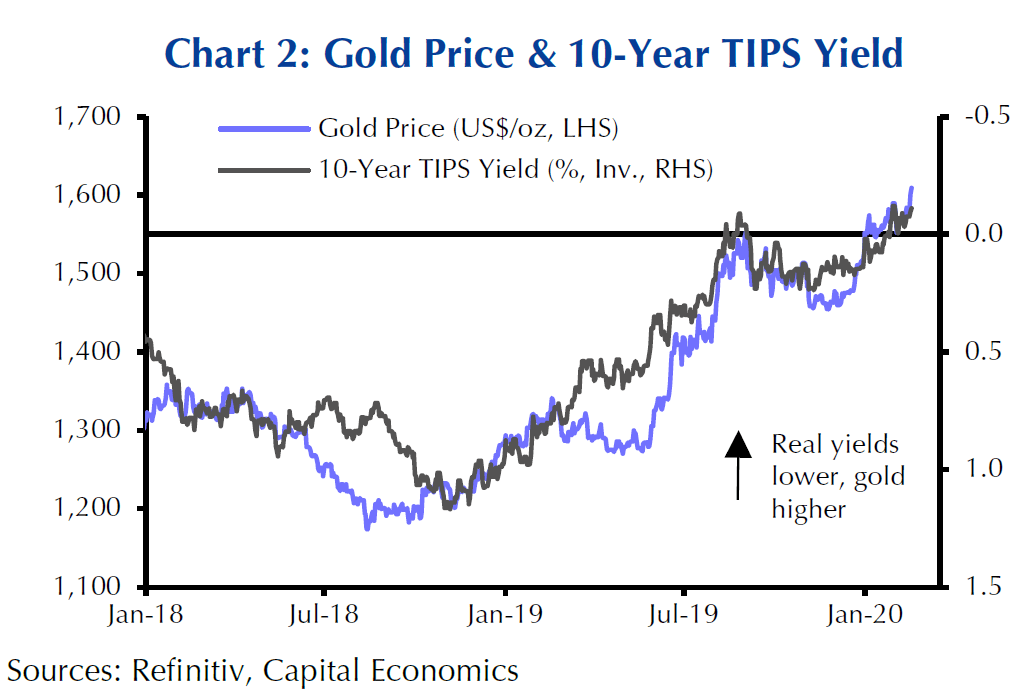 Despite the expectations for rate cuts, they don’t believe the Fed will cut rates. They note that the Federal Open Market Committee issued a statement that was almost unchanged when the number of coronavirus cases was still growing strongly. Further, Fed policymakers said that the virus hadn’t changed their outlook for the U.S. economy, although they were watching the economic risks associated with it.

Capital Economics analysts believe the Fed will only loose policy in the case of “significant economic costs at home, alongside a large and sustained drop in equity prices.” So far, the markets have moved in that direction with today’s deep plunge in the S&P 500, Dow Jones Industrial Average and Nasdaq Composite, following last week’s declines as well.

They expect real bond yields to bounce back above zero soon, which should reverse the gold rally. They see the gold price at $1,400 an ounce at the end of the year.

A bearish bet against the gold rally

While the number of bears betting against the gold rally is still relatively small, there is a less expensive way to do it. Kitco notes that the gold price has climbed so sharply, that some may see it as parabolic. Whenever any commodity’s price goes parabolic, a sharp correction often follows.

However, instead of just betting against gold outright, which would be extremely difficult because of how strong the rally has been, investors might consider buying puts instead. Blue Line Futures Chief Market Strategist Phillip Streible told Kitco that investors who want to bet on gold prices correcting might want to buy “inexpensive put options in deferred months.” This move would offer protection in the event that the gold price climbs another $50.