Our longs got plastered this month but our “short QQQ coronavirus hedge” (put on in late January when I felt the market was underpricing that risk, then covered this morning—hopefully not too soon!) worked as intended to limit the damage, and in a refreshing change our Tesla stock short position (despite an early-month spike higher) worked well for us this month too.

Meanwhile, throughout this entire bull market “microcap value stocks” (our primary focus on the long side) have grossly underperformed, yet despite being currently out of fashion I believe our long positions are terrific revenue-accretive targets for strategic buyers in related industries selling at much higher revenue multiples, and that when they’re bought it will typically be at 2x (or more) their current prices. Thus, we’ll continue to patiently hold them while constantly looking for others to add to the portfolio.

For a quick macro look, here’s the first U.S. economic data that incorporates any coronavirus effect at all (from a survey taken in early February) and it’s bad: 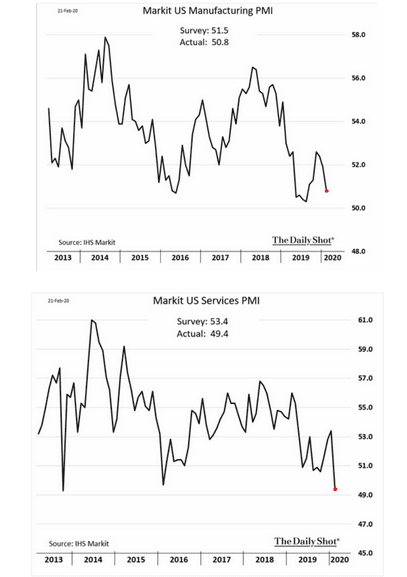 And here’s a summary of the January Cass Transportation Index (issued in February) which pre-dates any possible negative coronavirus effects: 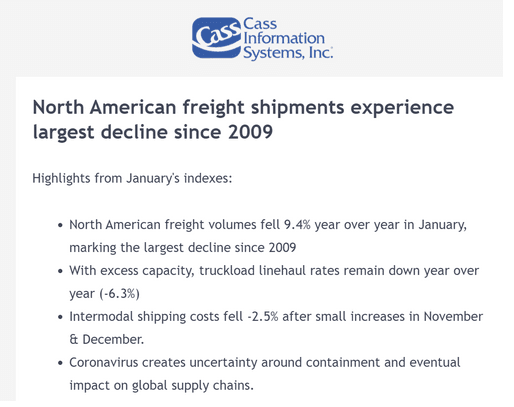 And U.S. rail traffic is awful too.

And now for the fund’s positions…

We continue to own Aviat Networks, Inc. (ticker: AVNW), a designer and manufacturer of point-to-point microwave systems for telecom companies (here’s the company’s latest investor presentation), which in January appointed a new CEO (with the interim CEO remaining as CFO/COO), and the accompanying press release made it quite clear (based on his experience) that he was been brought in to dress up the company and get it sold. In February’s earnings release Aviat reiterated its full-year guidance, promising significant improvement in both operating income and gross margin, while reporting a disappointing December quarter due to a vendor’s production issue that was subsequently rectified. Aviat has over $400 million of U.S. NOLs, $8 million of U.S. tax credit carryforwards, $212 million of foreign NOLs and $2 million of foreign tax credit carryforwards; thus its income will be tax-free for many years so GAAP EBITDA less capex essentially equals “earnings.” Valuation-wise, if we assume $11.5 million in FY 2020 adjusted EBITDA (the mid-point of guidance) and remove $1.7 million in stock comp and $6.1 million in capex we get $3.7 million in earnings multiplied by, say, 14 = approximately $52 million; if we then add in approximately $33 million of expected year-end net cash we get $85 million, and if we divide that by 5.4 million shares we get an earnings-based valuation of just under $16/share. More importantly, if we look at Aviat as a buyout candidate its closest pure-play competitor Ceragon (CRNT) sells at an EV of approximately 0.5x revenue, which for AVNW (assuming $230 million in 2020 revenue) would be 0.5 x $230 million = $115 million + $33 million expected year-end net cash = $148 million. If we value Aviat’s $400+ million in NOLs at a modest $10 million (due to change-in-control diminution in their value), the company would be worth $158 million divided by 5.4 million shares = over $29/share.

We continue to own Communications Systems, Inc. (ticker: JCS), an IOT (“Internet of Things”) and internet connectivity & services company (the company’s multiple divisions are best explained by its investor presentation) which in October reported fantastic Q3 earnings of .19/share with a 42% gross margin and $2.20/share in net cash. JCS is now making an annualized .68/share (based on the first nine months of the year, so as not to overemphasize one great quarter), however we should tax-adjust that to .48 as it’s been minimizing taxes by utilizing its NOL carryforwards. A 14x multiple on that plus the cash plus a $4.5 million valuation on $15 million of NOLs would value the stock at around $9.40/share. Additionally, the company is in contract to sell its headquarters building for $10 million; if that closes it generates $1/share in additional cash, making the stock worth $10.40. (The company then plans to rent a smaller facility and save approximately $200,000/year vs. the P&L impact of its current facility.)

We continue to own Westell Technologies Inc. (WSTL), which in February reported a substantially lower normalized cash burn (negative adjusted EBITDA plus capex) of around $800,000 for Q4 2019 vs. the previous quarter, despite a 5% revenue decline. The company ended the quarter with $22 million in cash (let’s assume $20 million at the end of the current quarter including a $1 million IP payment due) and no debt, and thus has over six years of remaining cash runway to grow revenue and return to break-even (it’s projecting to do so in 2021), and obviously much more than that if it cuts the burn along the way. (Along with the earnings report the company posted a new investor presentation.)  We continue to own Westell because it’s a $29 million/year, 39% gross margin business with around $1.25/share in cash that currently sells at a negative enterprise value. Assuming 15.8 million shares, an acquisition price (by a cost-eliminating strategic buyer) of just 0.6x revenue would (on an EV basis) be around $2.40/share. Preventing such an acquisition is that Westell suffers from a dual share class, with voting control held by moronic descendants of the founder who refuse to sell company despite the stock’s horrible performance. However, I’m hopeful that someone will knock enough sense into their small brains to inspire them to salvage what’s left here, and thus walk away with at least something from what they’ve squandered. If they do the stock should be at least a double from here, and possibly more. In other words, it’s too cheap for me to sell but the board is too incompetent for me to buy more.

We continue to own Evolving Systems, Inc. (EVOL), a small telecom services marketing company that roughly breaks even with a 65% gross margin and sells for less than 0.5x revenue. This is the kind of company that would make a great buy for a strategic acquirer, as $2.5 million a year in cost savings from eliminating the C-suite and price of being a standalone public company would mean that at $2/share (more than a 100% premium to the current price) a buyer would only be paying around 10x pre-tax earnings and 1x revenue.

We continue to hold a short position in the Vanguard Total International Bond ETF (ticker: BNDX), comprised of dollar-hedged non-US investment grade debt (over 80% government) with a ridiculously low “SEC yield” of around 0.4% at an average effective maturity of 10 years. With Euro area core inflation at 1.1% and—due to the ECB’s money-printing ultimately headed much higher—I believe this ETF is a great way to short what may be the biggest asset bubble in history. Currently the net borrow cost for BNDX provides us with a positive rebate of approximately 0.6% a year and I think it’s a terrific place to sit and wait for the inevitable denouement of this insanity.

Finally, as central banks prepare to increase their money-printing to even higher levels (in reaction to the coronavirus worldwide and, in the case of the U.S., to fund trillion-dollar plus annual deficits), I put on a small (less than 5% of AUM) long position in the gold ETF (GLD) and a small (less than 5% of AUM) short position in the U.S. 30-year Treasury bond ETF (TLT) when that paper was yielding just 1.69% despite core CPI inflation that is consistently running at 2.3%.