Today, CoinDesk Research released the 2021 Annual Crypto Review covering the key themes and metrics that marked the past year’s progress in cryptocurrency markets. 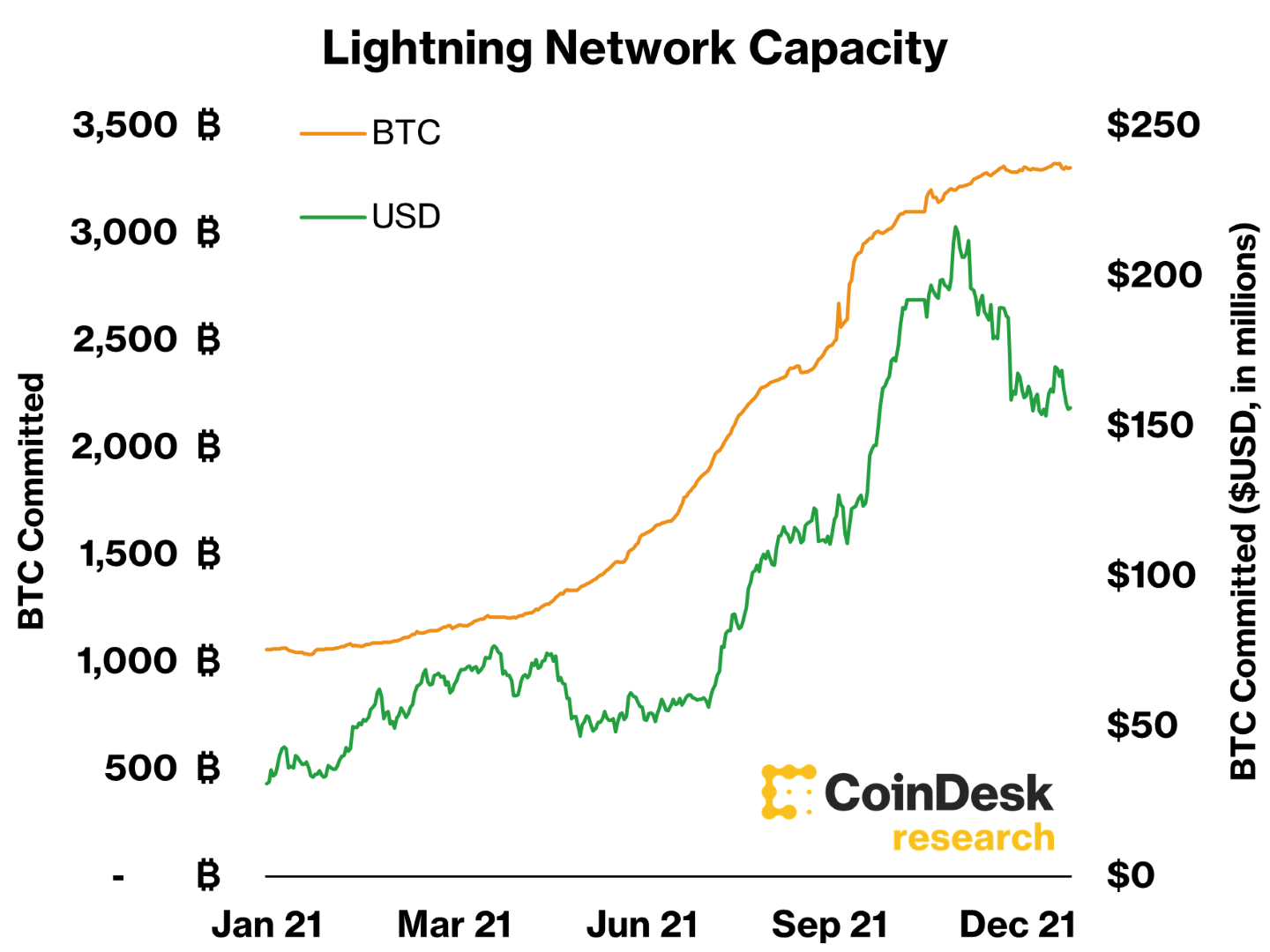 In the following report, we aim to summarize some of the key themes and metrics that mark the year’s progress in cryptocurrency markets.

As with all financial assets, market performance is usually the first thing that comes to mind when considering a “year in re vie w.” Bitcoin (BTC) and ether (ETH), the two largest cryptocurrencies, posted gains well in excess of traditional macro assets gaining 60% and 407% 407%, respectively. While ether, the native asset of the Ethereum blockchain, still has a way to go before traditional investors begin to form their investment thesis, bitcoin has cemented itself in the minds of all professional investors, as it eclipsed $1 trillion in market capitalization in 2021. What’s more, bitcoin also remained uncorrelated with all macro assets, which could make for an interesting value proposition for the asset as managers look to approach their portfolio construction in 2022. That said, bitcoin’s correlation with the S&P 500 ticked up in Q4 2021, suggesting that investors are trading bitcoin and equities together as risk on assets.

Outside of market performance, 2021 was a big year from an adoption and technological standpoint. In June, El Salvador announced that bitcoin would become legal tender; this declaration came to fruition in September when a law that stipulated that bitcoin must be accepted as a form of payment everywhere in the country went into effect. With that came multiple bitcoin purchases by the government, carried out from the president’s cellphone. Meanwhile, a free $30 worth of bitcoin was sent to Salvadorans who signed up to use Chivo, the country’s official bitcoin wallet, and a commitment was made to use the Lightning Network, the commerce layer for Bitcoin, to enable a more frictionless bitcoin economy. The amount of bitcoin committed to the Lightning Network grew incredibly fast in 2021, injecting renewed life into the digital cash use case for Bitcoin

2021 also marked the year of an important technological upgrade to the Bitcoin protocol known as Taproot (read more here). Taproot is a bundle of three upgrades that improves network security, privacy and scalability. Taproot is the most significant upgrade to the Bitcoin network since the activation of the block capacity enhancement of Segregated Witness in 2017. Taproot was a reminder that Bitcoin is a technology that can change in order to improve usability and user experience. Taproot’s success going forward will stand in as a demonstration that Bitcoin can adapt

With ether’s superior asset price performance compared with bitcoin, it’s no surprise that bitcoin dominance, the measure of BTC market capitalization compared with the market capitalization of all digital assets, fell during 2021 from 70.2% to 40.1% 40.1%. ETH is not the sole reason for bitcoin shedding its dominance; rather, crypto projects have sprung up with many different use cases that are not competing directly with Bitcoin.

Ethereum has had major catalysts from EIP 1559 to the impending transition to proof of stake . Both events play important roles not only in the growth of Ethereum as a technology, but also in developing a narrative for Ethereum’s native asset. EIP 1559 solidified ether’s role as “gas” within the ecosystem, demanding that the asset be used and burned in exchange for building on or interacting with the network. The “Merge” to proof of stake is an attempt to create a secure, more scalable smart contract network without the need for miners and significant energy consumption .

Ethereum was the catalyst for the initial coin offering boom and bust in 2017/8 and out of the embers came the first wave of decentralized finance (DeFi). During 2019 and 2020, Ethereum based projects such as Uniswap, Compound and Aave (formerly Lend) found their footing. Using the crypto bull market and liquidity mining (token incentives) as fuel, DeFi projects were able to acquire billions of dollars in liquidity for efficient decentralized lending and trading markets.

Ethereum can also credit a sizeable portion of its upswing to the rise of non fungible tokens (NFTs) NFTs), which brought the protocol into the mainstream. NFTs are unique tokens that can act as digital representations of physical items or digitally native items whose proof of ownership can be verified on a public blockchain. As such, NFTs attempt to stand in as the first iteration of digital ownership of collectibles on a blockchain. OpenSea was the darling of the NFT sector in 2021, bringing a digital art marketplace to retail investors.

Inside the world of institutions and regulation, capital poured into blockchain and crypto companies. According to data from Blockdata, $23 billion of funding reached these companies in 2021, which is more than the total amount raised from 2017 to 2020. We even saw a $1 billion capital raise in December for NYDIG, and FTX raised more than $1 billion across two funding rounds.

From a regulatory perspective, governments across the world are taking crypto seriously . We have seen China ban bitcoin mining and crypto trading outright. India and Nigeria have tried to do the same. The Bank of England said that the growth of crypto assets poses a potential threat in a Financial Stability Report as it becomes increasingly linked to wider financial networks. The word “crypto ” even echoed in the halls of Congress as a $1 trillion infrastructure bill was held up in part due to a crypto tax provision. Regulators’ involvement in and discussion of crypto is indicative of the widespread belief that crypto is here to stay and, because of that, should be regulated to “keep citizens safe.”

2021 was an extraordinary year for the cryptocurrency and blockchain industry. Bitcoin and Ethereum asset prices touched all time highs ; traditional businesses such as Visa bought NFTs like CryptoPunks and Bored Apes; Stephen Curry bought a Bored Ape and so did other professional athletes; politicians routinely discussed crypto policy; China banned bitcoin mining and crypto trading; Coinbase went public at a $100+ billion valuation as a profitable business ; more bitcoin made its way onto MicroStrategy’s balance sheet; a sovereign nation made bitcoin legal tender and the Lightning Network more than tripled in size ; legitimate layer 1 smart contract competitors to Ethereum came to bear; over $20 billion of venture capital and funding flowed into companies; Bitcoin implemented a protocol wide improvement , Ethereum did too as it moved toward the Merge and proof of stake; a Bitcoin ETF began trading in the United States and debuted with the second most volume ever ; DeFi took the virtual world by storm, with promises to remake the legacy financial system. This and much more in the pages that follow.

Thanks to 2021, most people have at least heard of crypto by now.