1) Famed short seller Carson Block of Muddy Waters Capital has just written his first investor letter. I was able to get a copy, which you can read here. He concludes:

But I return to the proposition that there are still numerous opportunities for activist short sellers. Most charlatans will be too charlatany to make a real car or rocket. If we retain our focus on playing the man, but with a better-informed framework for assessing him, we can continue to do well. The biggest threat to our model comes not from infinite emergency monetary policy, but from the erosion in the rule of law that liberal democracies have experienced.

In my wars in continental Europe, I've repeatedly made the point that you cannot separate politics from capital markets. The capital markets are where political and financial power meet. The French and Germans value relatively free expression when it comes to matters of government and politics, but have been notoriously averse to capital markets-related critiques. (Credit where credit is due though – France seems to have evolved a decent bit in the past five years.) I believe that there is a feedback loop between the lack of rule of law in the markets and in broader society.

The more that our elite enrich themselves while violating the spirit – if not the letter – of the law without negative repercussions, the more it erodes the rule of law because the public becomes increasingly radicalized and viscerally opposed to institutions. As institutions erode, you have more untouchables like Elon Musk (or numerous other people of whom you've never heard), which creates more radicalization, and so forth.

I see both political parties as nihilistic in their own ways, trying to destroy institutions directly while egging the other party on to do the same. Additionally, both the left and right routinely assault the freedom of expression, which is the lifeblood of what we do. Therefore, the political dysfunction of America is the largest threat to the viability of the activist short selling model. Because at some point, government actors must hold market participants accountable at least some of the time. Without that, there really is no financial disincentive to be long a debt-fueled fraud.

I believe that President [Joe] Biden is a centrist, and that his win was a triumph for anti-nihilism. I am concerned though that centrism, while holding the break in the dam, cannot hold the dam itself. We're going to remain out there for the foreseeable future, pulling down the pants of the grifters in the markets. If there comes a day when that's completely ineffective, grieve not for us, but for the national greatness that is lost. In the meantime, if you want to join us on our mission of tilting against windmills while trying to make some scratch, give us a shout.

I Could Have Quadrupled My Money On Gov. Cuomo's Resignation

2) Longtime readers may recall that during the last three presidential elections, I've made dozens of wagers on political events – and made tens of thousands of dollars – on a betting site called PredictIt.

To be clear: in making these bets, I was not making partisan statements.

In fact, the key to making successful bets in this area is the same as in other aspects of investing: you must put aside your emotions and invest purely based on good data and analysis.

After cashing in following the last election, I haven't made any news bets on PredictIt – but when I saw that New York Gov. Andrew Cuomo resigned, I was curious to see if I'd missed an opportunity. Sure enough, I had...

This chart shows the past 30 days of trading in the market for Will Andrew Cuomo resign before Sept. 1?: 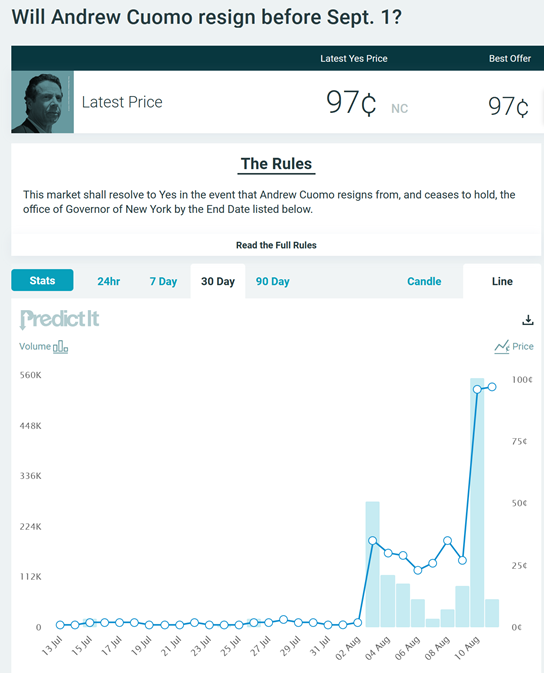 In other words, three days ago, I could have bought this contract for $0.27... and nearly quadrupled my money the next day!

Of course, hindsight is always 20/20, but after President Biden and nearly all elected officials in the state called for Cuomo's resignation more than a week ago and the New York State Assembly scheduled public and private hearings as part of its impeachment investigation, it seemed clear that the odds of his resignation were much higher than 27%.

3) The interesting question here is: Why were PredictIt investors so wrong?

The answer, I think, is that humans tend to under-react to new information that significantly changes the odds.

This has huge implications for investing. When new information emerges that meaningfully shifts the odds, investors must: a) recognize this... and b) take appropriate action.

I can think of dozens of examples...

When McDonald's (MCD) made company veteran Jim Cantalupo CEO at the beginning of 2003, the odds that the company would turn around went up markedly – but the stock didn't, creating an incredible opportunity that I took full advantage of – it was the biggest win of my early hedge fund career (the stock is up 20 times since then). In October 2003, I nominated Cantalupo for CEO of the Year.

When Carl Icahn invested in Netflix (NFLX) in late 2012, it gave the company a deep-pocketed backer – and the stock has never looked back (it's up more than 50 times since then). Interestingly, Icahn invested only weeks after I'd pitched it at my Value Investing Congress (slides here) and on CNBC, saying it was an even better business than Amazon (AMZN), on the very day the stock hit a multiyear low of $7.78 (split-adjusted).

When Tesla (TSLA) reported a surprise profit in the third quarter of 2019, it was clear that the short thesis that the company would spiral into bankruptcy was wrong and it was time to cover the short position, which I recommended in my October 24, 2019 e-mail (the stock is up 12 times since then).