The answer to the title of this article, the polite version of which is “Buy The Dip or Sell The Rally”, may well be the most important question facing stock investors this year and possibly for years to come. The bull market, now almost ten years old, has been supported by a number of technical pillars. Of these, three of the more significant ones are the “BTFD” mentality, shorting volatility (often referred to as vol), and corporate share buybacks. We are strongly of the opinion that when these technical pillars fail, the stock market will as well. It is important to note that while we wait on technical indicators for price guidance, there is a preponderance of fundamental warnings that should also be considered.

Expanding on Minsky’s theory, former Federal Reserve governor Laurence Meyer clarified the concept stating that “a period of stability induces behavioral responses that erode margins of safety, reduce liquidity, raise cash flow commitments relative to income and profits, and raise the price of risky relative to safe assets–all combining to weaken the ability of the economy to withstand even modest adverse shocks.”

Over the last ten years, volatility has been transformed from a purely quantitative barometer of perceived future stability and a key input for options pricing to a full-fledged investment vehicle. It has gone from an obscure gauge of price movements, like the tachometer on the dashboard of your car, used mainly by sophisticated investors to one of the pistons in the engine helping propel markets. Since the financial crisis, investors and traders have learned that shorting volatility can provide significant and durable returns to help supplement low yields in traditional asset classes. The recent spike in volatility from all-time lows instantly put an end to this myth.

Many of those shorting vol, via a plethora of exchanged-traded funds and notes (ETF’s and ETN’s) that were designed to profit as market volatility dropped, were badly uninformed about how vol is computed or its longer-term history. The graph below charts the steady price increase in XIV, a short volatility ETN, since 2016 and the rapid evaporation of gains that occurred over just a few days. 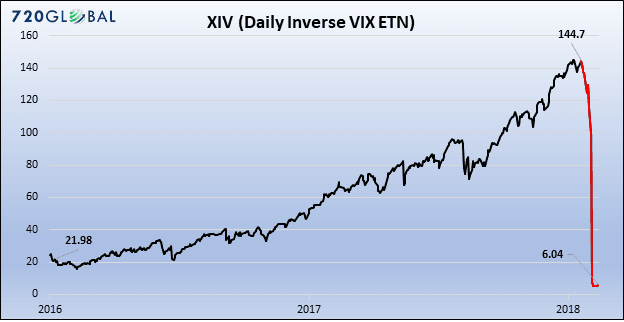 A majority of short volatility ETF/ETN holders were of the mindset that the Fed, through its extraordinary interest rate and QE policies and its implicit statements supporting the market, would never let the markets fall again. They erroneously believed the Fed had once-and-for-all ushered in an unprecedented era of stability. There is no question that a lack of volatility, or perceived market stability, in recent years was unlike any other historical period. Given this prevailing mindset, why not short fear and go long stability?

This is exactly what many investors did. As more money chased the easy profits of short volatility strategies, investors were indirectly and unknowingly propelling the market higher in a self-reinforcing fashion. Ironically, as investors went “long stability” (short vol) they were making the markets inherently less stable. These poorly constructed securities came to a punishing end during the first week of February when the VIX index increased by over 100% on February 5th and wiped out or severely impaired those short volatility. XIV has since been delisted closing out at a final observed price of $6.04 per share.

This important technical pillar of equity strength has been permanently damaged and will likely provide much less support going forward.

Another major pillar of support for equity prices is corporate buybacks. The graph below shows the correlation between buybacks and the S&P 500 since 2000 (note that 2018 is an estimate).

Further support for this theory comes from Goldman Sachs who claims that corporations have been the biggest class of buyer of equities since 2010 easily surpassing ETF’s, foreign investors, mutual funds, households and pension funds.

There is currently nothing that leads us to believe that corporations will stop buying their shares back, and if anything the recent tax reform further supports this trend. While buybacks currently show no signs of slowing, the recent increase in interest rates may make buybacks more difficult to conduct as debt has been a main source of funds for buybacks as shown below. Furthermore, higher interest rates may cause the credit rating agencies to downgrade companies who have accumulated large debt loads which would add to the cost of issuing debt and make buybacks more challenging. While this pillar of the bull market is still standing tall, it is worth following.

Since the lows of 2009, BTFD or “buy-the-dip” has gone from a catchy acronym to a most trusted investment strategy.  Those that have followed this advice and bought when the market has shown temporary weakness are batting 1,000%.

When individuals, financial institutions, corporations, and even some central banks have a “can’t lose” strategy, sustainable market support is generated. The initially tentative investor response of BTFD has become emboldened over time and eventually turned in to a muscle memory-like reaction.

We believe it will take a series of market dips followed by rallies that do not quite get back to recent highs to erode confidence in the BTFD strategy. A period of such price action, sequential lower highs and lower lows, will cause “easy” profits to turn in to losses. As doubt and anxiety rise with losses mounting, it will challenge investor beliefs and with it remove critical support underlying the bull market.

Beginning in late January, the S&P 500 fell about ten percent and subsequently recovered about 75% of it. If the equity market fails to reclaim the January highs, then this would begin to look like a textbook technical topping formation. It is not unusual for a topping process to develop at a time of extreme optimism as is currently being experienced.

If, however, the market pushes to record highs, the BTFD’ers will have again been rewarded. Investor confidence reinforced, and the timeline for a major correction would be extended into the future.

When BTFD fails, we suspect investors will slowly gravitate to an STFR (Sell the Rally) mentality. Contrary to BTFD, they will sell or establish short positions when the market rallies. That transition, however, will only occur after much pain has been felt by those whose optimism gradually gives way to the reality of having incurred a series of losses.

Despite fundamental warnings and the collapse of the short volatility trade, we must give the bull market trend and its two remaining key pillars the benefit of the doubt. We believe it is reasonable to maintain long positions but only while remaining cautious and nimble. Watch closely for signs of lower highs and lower lows as well as indications that buybacks may be slowing down.

This bull market, like all others that have preceded it, will eventually fail and years of gains will be erased. Those focused on building wealth will once again face tough choices. Do you continue to trust in the crumbling pillars of the bull market or do you exhibit prudence and protect what you have and wait for the future when prices are much lower and valuations far more reasonable?

We leave you with a few words from Lance Roberts

“The Fed has not put an “end” to bear markets.  In fact, they have likely only succeeded in ensuring the next bear market will be larger than the last.”