ValueWalk
Home Business A Look at the BRICS Part I: Brazil’s Woes

The BRIC countries (Brazil, Russia, India and China) have been touted as the world’s driving forces in economic growth and development for the next 2-3 decades. However, recent economic challenges are putting question marks on the promise upon which, many have placed their hopes. The BRIC countries prospects are based on their population statistics, natural resources and various macro economic factors. The first two are under no threat, but the latter third, is what many economists perceive to be a possible stumbling block.

The four countries have a combined population of more than 40% of world population, and when their Gross Domestic Products (GDPs) are married together, they account for approximately 25% of the global GDP, according to the world bank statistics. They represent part of a pool of countries categorized under emerging economies and these four along with South Africa, were pinpointed by Jim O’Neil, of Goldman Sachs, in a 2001 paper titled “The World Needs Better Economic BRICs.”

According to a Global Sherpa publication, the following table comprises of BRICs development indicators for period 2011 through 2014. The combined population for the BRICs is over 2.8 billion, while the average GDP growth rate over the last two decades is 4.8% with China holding the lion’s share of 10.1%, while Brazil has the least at 0.3%. However, the projected growth rate  for 2011-2014 is at an average of ~6.6% for the four nations with China dropping to 9.5% and Brazil gaining to an average of 4.2%. 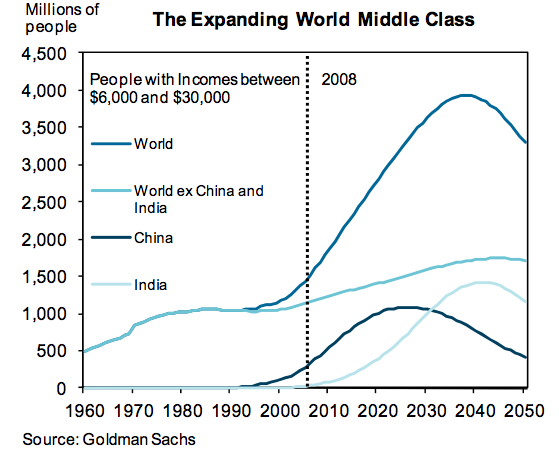 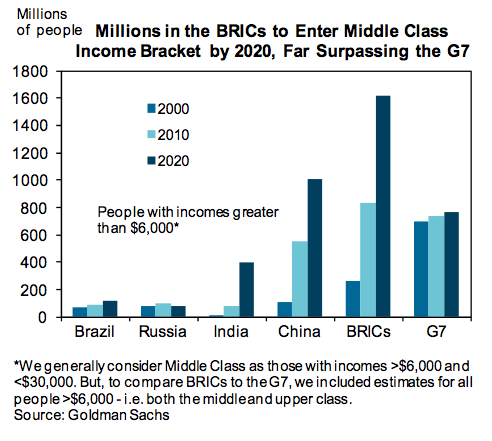 The Goldman Sachs Group, Inc (NYSE:GS) report had projected more than 1.6 billion people from the BRIC countries to earn an annual income of between $6,000 and $30,000 by the year 2020 as compared to approximately 700 million people from G7 countries. This meant that the BRIC countries are expected to dominate the global economy by as early as the year 2020. The charts below illustrate Goldman Sach’s prediction for 2010 and 2020 in reference to the year 2000 data. Recent reports suggested that China have already overtaken the U.S as the world’s greatest economy, while Brazil, is believed to have overtaken the U.K, which is a member of the G7 countries.

The BRIC countries have several characteristics in common, but all the same, they do have unique attributes both positive and negative. We hereby assess, what drives each country’s economic growth prospects along with the impending challenges that have in the recent past threatened to thwart Goldman Sach’s 2050 economic report.

The south American country  has well-established agricultural, mining, manufacturing, and service sectors. Its economy is far much better than that of all other South American countries, and its presence is already stretching to world markets.

Brazil’s macroeconomic stability has been improving since the year 2003, which has helped the country build up foreign reserves, and reduce its foreign debt by shifting its debt burden toward home-based instruments. The country was awarded investment grade status by two rating agencies in in 2008. However, beginning the same year and extending to 2009, Brazil was hard hit by the global financial crises reporting recession in two consecutive quarters, after the global demand for her commodity-based exports hit the floor in a period when external credit was inaccessible, CIA.gov country issued an economic data profile.

However, Brazil was one of the first emerging markets to begin a recovery. In 2010, Brazil’s GDP grew by an overwhelming 7.5%, in the aftermath of the global financial crises, after consumer and investor confidence was revived. While this represented the highest growth rate in the past 25 years, its significance can only be better evaluated assuming, the global financial crises never took place. For this reason, it is unlikely that, under normal circumstances, this would have become the highest rate of growth in 25 years.

This point is justified by the rate of economic growth reported for 2011, as the country could only manage a mere 2.7%, a majority of the Latin America countries did better. In my opinion, the 7.5 % growth rate can only be described as a massive recovery from the global financial crises, other than real economic growth.

Nonetheless, recent reports have indicated that Brazil has already overtaken the U.K to become the world’s 7th largest economy in terms of GDP, despite the mediocre economic growth experienced in 2011.  As at December 2011, urban unemployment stood at a historic low of 4.7%, and Brazil’s high level of income equality has also been declining for each of the last 12 years, which stood at approximately 54% in 2009.

The country has very high interest rates, as compared to other countries, something that is likely to attract foreign investors, notes CIA report.  However, Brazil’s high capital inflows garnered over the years, which have contributed to the appreciation of the currency, are hurting the competitiveness of country’s manufacturing sector.

This has necessitated government intervention in foreign exchange markets and a rise in taxes on some foreign capital inflows. President Dilma Rousseff has retained the previous administration’s commitment to inflation targeting by the central bank, a floating exchange rate, and fiscal restraint. This has halted consumer spending, which in turn has slowed down the country’s economic growth prospects. However, despite the lows realized in 2011, the prospected economic growth in 2012 is believed to be a bit higher.

The euro zone crisis are also not helping out with the economic prospects for Brazil, as the region is one of the biggest customers for Brazil’s exports.

This is a case of Brazil’s economic prospects as one of the BRIC countries. In as much as Brazil faces its own challenges in keeping up with, pace set by the likes of Asia, and Russia, there is doubt as to whether, Brazil, is the most likely country to fault The Goldman Sachs Group, Inc (NYSE:GS)’s outlook. Watch this space for analysis on India, Russia and China, as I seek to complete the BRIC economic overview.