For millions of young people, student loans aren’t like other kinds of debt, for millennials under the age of 30, the culmination of student debt has risen to more than $1.5 trillion in the United States.

The massive obligation that is student loan debt doesn’t just change the way Americans think about extending their education; it can force them to live at home longer, hinder their overall net-worth, damage their credit for years, and negatively impact their professional aspirations.

For some millennials, college debt can become a crippling expense they struggle to overcome.

With the student debt crisis contenting to rise and gaining national attention, Crediful surveyed over 980 people with student loan debt to understand just how bad things have gotten and whether the cost of their education has changed the way millennials think about their degrees.

While some people feel their student loans are keeping them from being able to travel or buy a new car, more than half of graduates indicated they would be able to focus on paying off credit card debt if their student loans were canceled. More than 2 in 5 would have the bandwidth to pay off other forms of debt (Including medical debt) if they didn’t have to worry about their student loans.

And while graduates with an Associate degree might have the lowest average monthly payments, their debt may represent the largest burden. Roughly 1 in 4 identified finding other expenses and bills difficult to manage, followed by more than 1 in 5 with a Bachelor of Arts degree. Graduates with a Bachelor of Science degree were the least likely to indicate struggling to pay other bills despite owning nearly $33,000 on average.

The Debt Impact Of Bachelor of Arts Degree and Graduate Degrees

More than half of Americans (57%) indicated their debt holds them back from major life milestones, including the ability to own a home. Overwhelmingly, first-generation college graduates had the highest average student debt ($38,000) and the highest chance of being held back by debt (89%) after school.

By their own estimations, the impact of debt after graduating tainted the value of their degrees for some students. One man with a Bachelor of Arts degree and $50,000 in student loan debt admitted to believing he would be “financially crippled for the rest of [his] life due to student loans.” Another man with a Bachelor of Science degree and $20,000 in student loan debt indicated and lower level of debt would have been helpful and not had a major impact on his job prospects.

One woman with $250,000 in student loan debt indicated she was in medical school and believed the payoff would be worth it in the long run.

When asked to get specific, more than 1 in 3 borrowers believe federal loans should be forgiven compared to less than 1 in 10 (8%) who felt the same way about private loans.

Given the media attention to the student debt crisis across the country, Crediful revealed nearly half of Americans (47%) would consider voting for a presidential candidate based solely on their policy to forgive student debt. Nearly 1 in 5 (19%) were unsure. Still, if they had known in advance that their loans would ultimately be forgiven, 1 in 3 graduates would have chosen a more expensive college education in the first place.

Thirty years ago, students leaving college or university with their degrees in hand might have had $10,000 in student loan debt on average. Today, the amount of money owed before many students even have a job offer in hand has increased by three times on average or more. For those looking to go to graduate school, the average amount of student loan debt is nearly $63,000. For some people, the cost and the reward don’t line up anymore, even though your degree can still have a major impact on your job prospects.

At this point, the student debt crisis has reached such a fever pitch, many Americans are willing to base their decisions for the next President of the United States on their stance on student debt forgiveness. If there’s not a serious consideration, we don’t know what is. 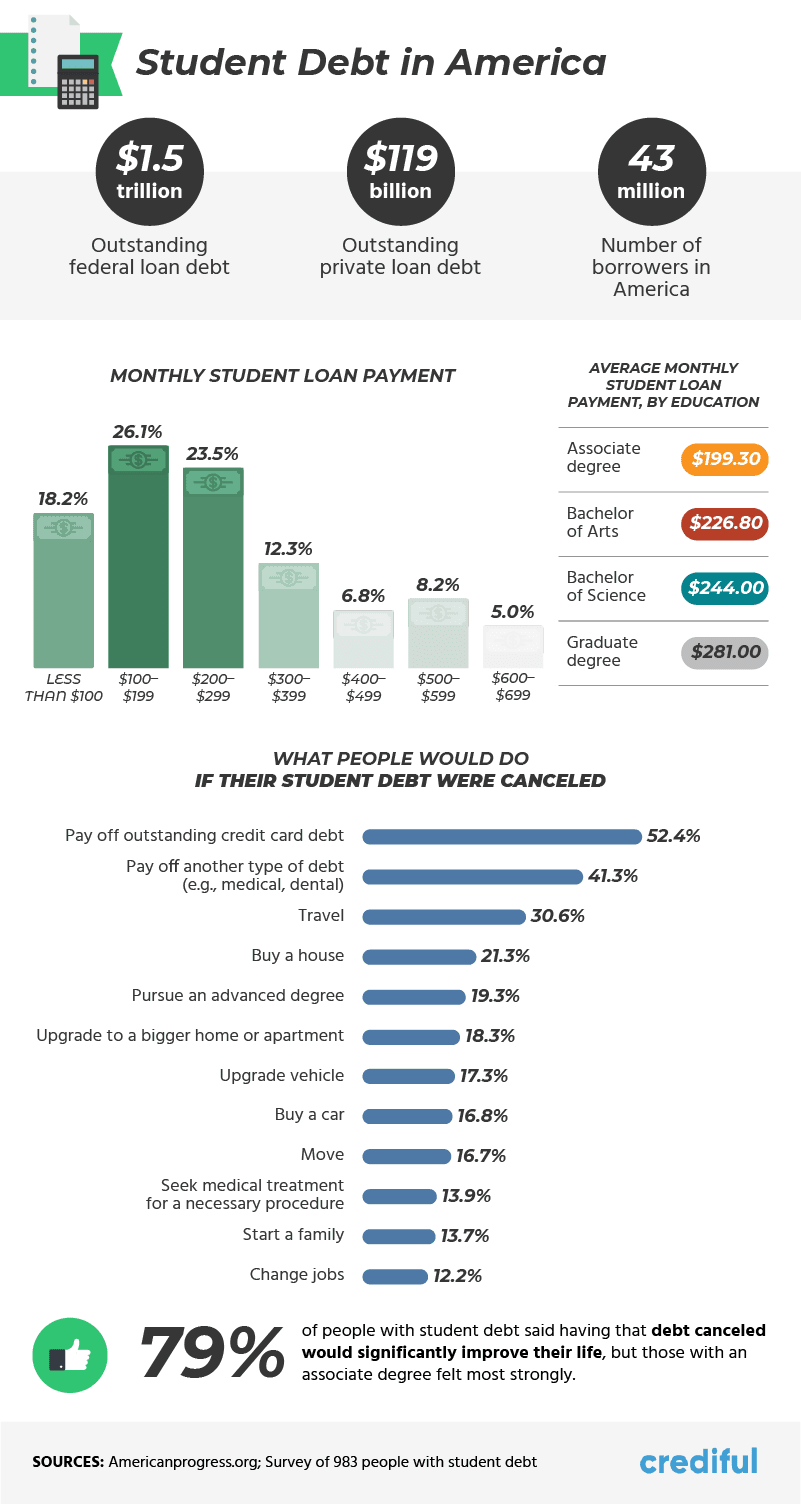 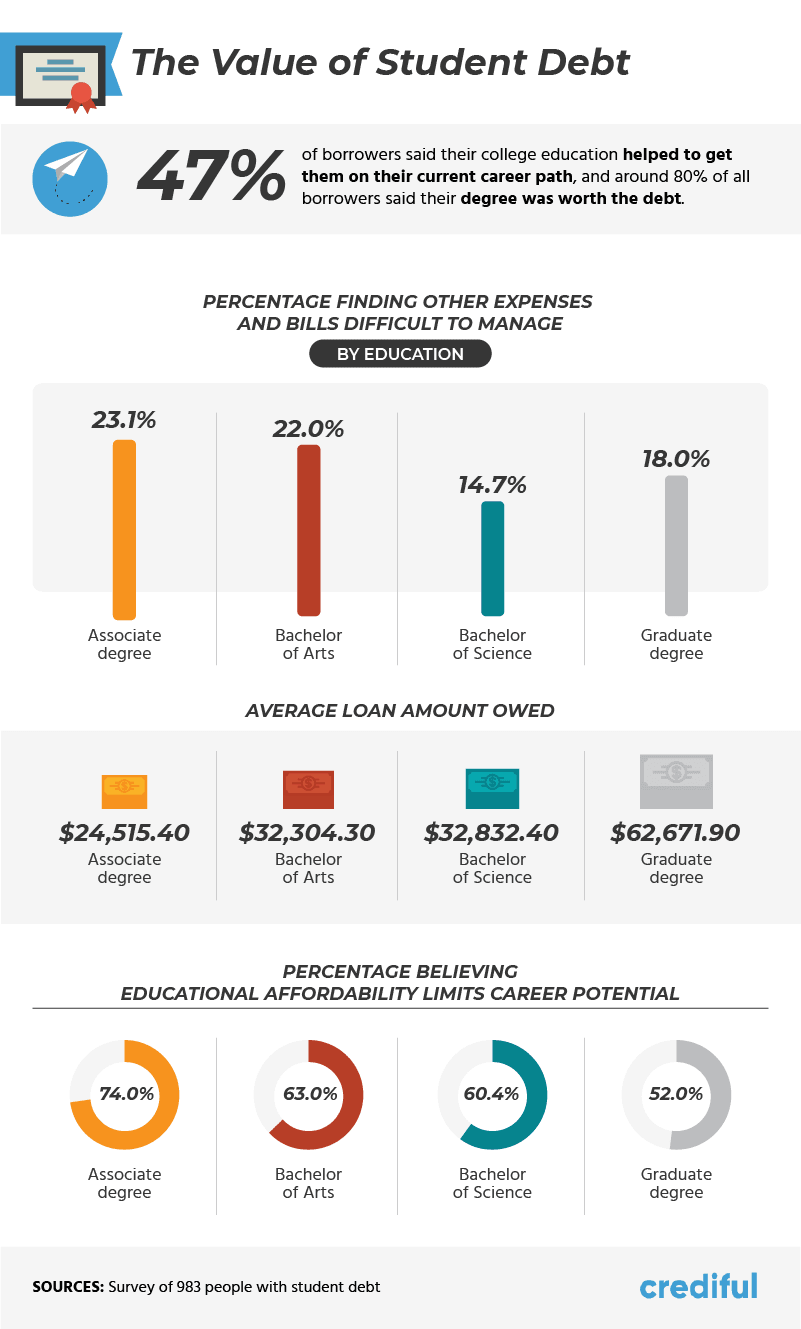 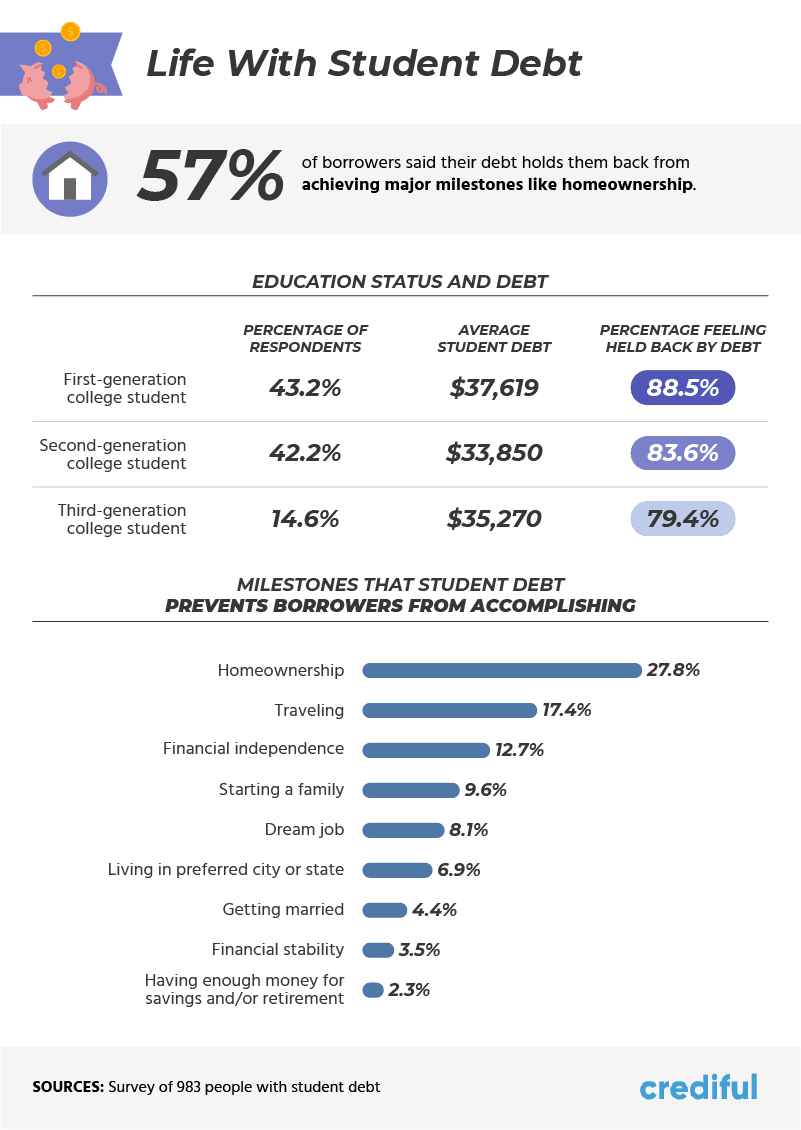 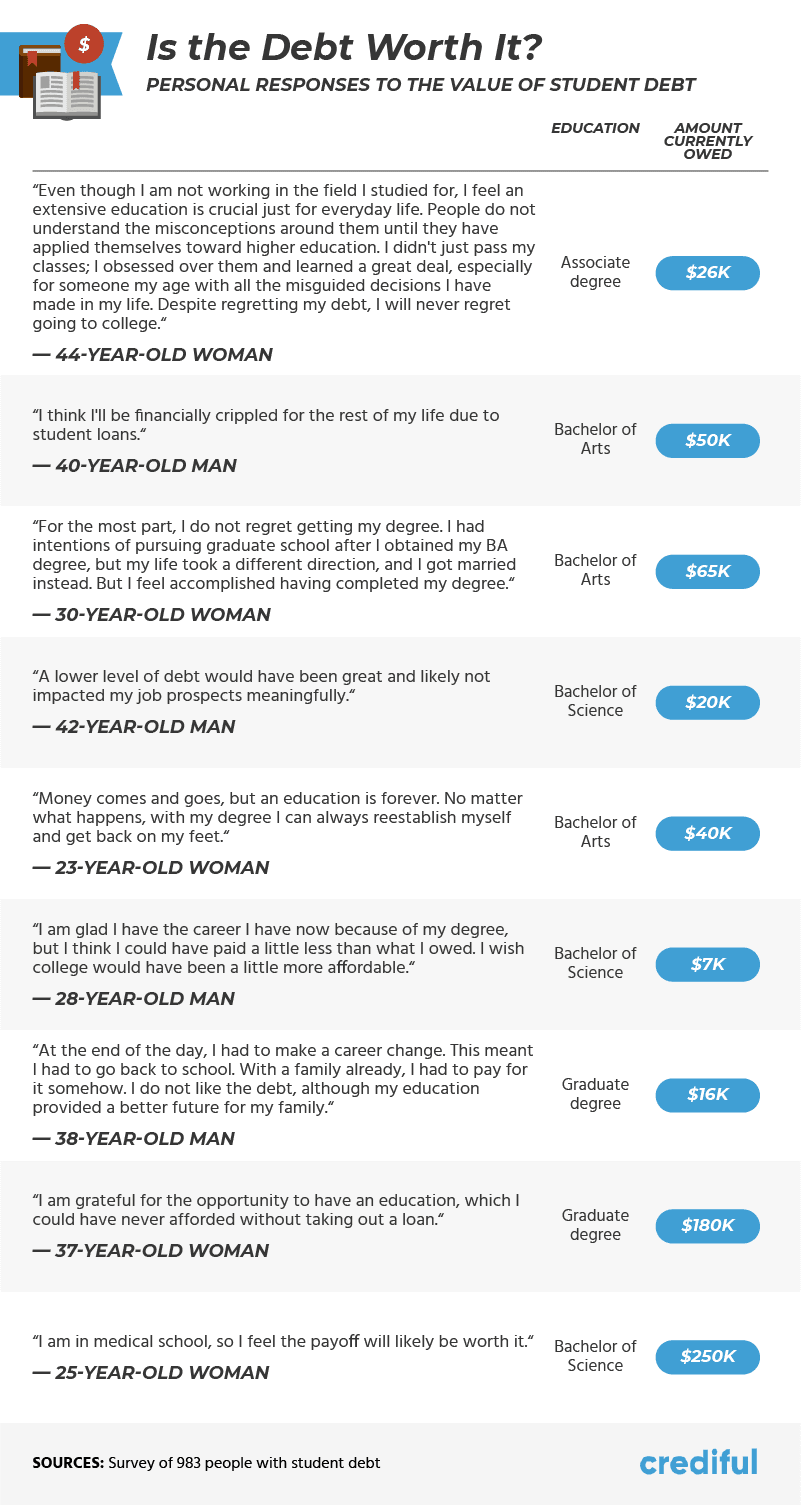 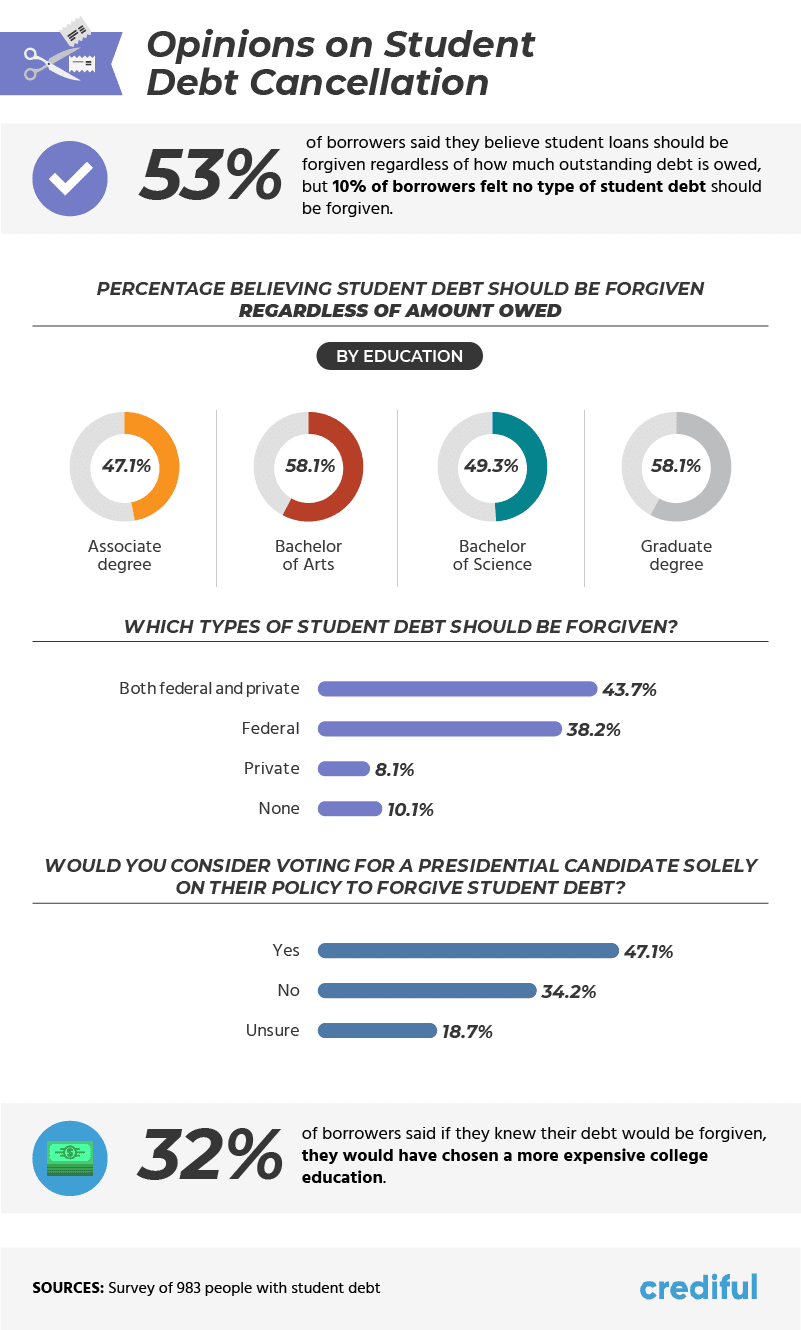