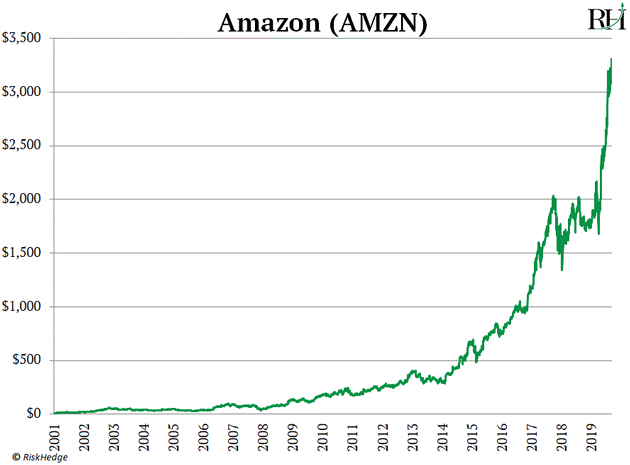 Obviously, anyone who got into Amazon early and held on is living the high life and deserves a round of applause. But now, it’s time to come to terms with a sad truth: Amazon’s glory days are over.

Because it has finally met its match. And it’s all because of one simple reason: It finally has legitimate competition.

Below, I’ll show you the three companies - what I call the "anti-Amazon" alliance - all coming for Amazon’s throat. All are rapidly stealing key parts of Amazon’s business. And all will prove to be much better investments in the coming years…

The Anti-Amazon Alliance - There's a New Challenger to Amazon Prime

Longtime RiskHedge readers know Walmart (WMT) is one of my favorite stocks on the planet. Walmart is America’s largest retailer. It sold more than half a trillion dollars-worth of goods through its stores last year!

And its new “secret weapon” Walmart+ could dethrone Amazon’s online dominance. Amazon launched its wildly popular Prime delivery service 15 years ago. Today there are more Prime subscribers than there are full-time workers in America!

Creating an “everyday goods” subscription with free delivery was genius. Why would members ever shop anywhere else when they can click a button and have practically anything show up on their doorstep in two days? In short, Prime transformed Amazon from an $18 billion internet retailer into a $1.5 trillion beast.

Walmart+ is a total game-changer. Walmart will sell over $75 billion-worth of goods through Walmart.com this year. In fact, it’s overtaken eBay to become America’s second-largest online seller.

The thing is, roughly 90% of sales still happen in-store. Walmart+ is going to transform Walmart into a true online behemoth.

The subscription will cost $98 a year, and include perks like unlimited same-day delivery, access to its new two-hour delivery offering, and discounts on fuel at Walmart gas stations. Clicking a button on Walmart.com and having groceries and other items show up on your doorstep the same day is huge.

I expect at least 10% of consumers will jump at the chance to sign up for Walmart+. And once these folks are “locked in,” they won’t want to shop anywhere else. In short, this will add hundreds of billions of dollars to Walmart’s value over the coming years. I believe the stock will double over the next 18 months.

An Army of Small Businesses Are Moving Online

Shopify (SHOP) is what I call the "anti-Amazon." It helps entrepreneurs create and manage their own online stores.

Think of Shopify like an invisible partner that allows you to build your own brand. Regular RiskHedge readers know it now runs websites for over one million mom-and-pop shops.

There are 30 million small businesses in the US. These small businesses make up 99.9% of all companies in America. They are the beating heart of communities across the country. And according to IRS data, firms with less than $100,000 in annual sales raked in a combined $2.2 trillion last year.

Yet almost none of this happens online. A recent CNBC poll found almost half of small businesses don’t even have a website. And according to Gallup, two-thirds of mom-and-pop stores that sell online generate less than 10% of their sales on the internet.

But coronavirus lockdowns have sparked a once-in-a-lifetime shift. It forced tens of millions of businesses to close their doors for months. And the only way to keep cash coming in is to sell online.

In short, mom-and-pop shops moving online for the first time ever is the next great internet boom. And they’re choosing to sell through Shopify over Amazon. In 2012, it had just 42,000 merchants. Today, more than 1,000,000 businesses around the globe have set up an online store with Shopify.

This is the world’s most disruptive retailer that most investors aren’t paying attention to. It’s a stock to own for the next decade.

Etsy (ETSY) is another member of the "anti-Amazon" alliance.

In short, Etsy has become the “go-to” for artisans selling online. It currently has 65 million items you can’t find anywhere else. For example, my cousin recently bought my grandmother a family tree on Etsy. It was custom-made with all the grandkids’ names:

And unlike buying stuff at big box stores, which is a chore, spending money on Etsy feels “good.” You can click on each item and read the story behind the person who made it. In short, it’s rewarding to know your dollars are going into the pockets of small businesses.

For example, my colleague just bought a $400 laundry rack on Etsy. He could have picked one up on Amazon for 50 bucks. When I asked why he bought one on Etsy he replied, “A woman in rural Maine handmade the rack. It feels good having it in my home.”

The Amazon machine simply can’t compete with this. In fact, becoming the “Amazon for artisans” is Etsy’s big opportunity. Roughly $5 billion worth of craft goods were sold through its marketplace last year. Yet the Association for Creative Industries shows folks in these markets spent $100 billion on handcrafted and unique products last year.

So Etsy has only realized 5% of its potential so far. It has years-even decades-of rapid growth left in the tank. As it helps millions of artisans sell their talents to the world, it’s sure to become an online titan. This is a stock that can double many times over in the coming years.

Amazon Won't Dominate the Next 20 Years of E-Commerce

Amazon has been one of the most dominant, disruptive stocks over the past two decades. And it will continue to be a major force in online shopping. But its time as America’s undisrupted online king is drawing to a close.

Disruptors like Walmart, Shopify, and Etsy are nipping at its heels. And I’m betting these three stocks will outperform Amazon over the coming years.