Whitney Tilson’s email to investors discussing what the bond market is telling us about the Biden economy; hedge fund king Bill Ackman bets on interest rate rises crashing markets; 30-year mortgage rate tops 3% for first time since July; where have all the houses gone?

What The Bond Market Is Telling Us About The Biden Economy

1) Interest rates are rising, reflecting increasing optimism about robust economic growth going forward as we emerge from the pandemic.

This New York Times article does a good job of explaining what's happening and what could go wrong: What the Bond Market Is Telling Us About the Biden Economy. Excerpt:

While Washington debates the size of a new economic rescue plan, the bond market is sending a message: A meaningful acceleration in both growth and inflation in the years ahead looks more likely now than it did just a few weeks ago.

That would be mostly good news, suggesting an economy recovering quickly from the pandemic. Interest rates remain very low by historical standards, even for the longest-term securities. Bond prices imply that inflation will be consistent with the Federal Reserve's target of 2% annual rises in consumer prices, not a more worrisome spiral.

2) One risk of the unprecedented fiscal and monetary stimulus we've engaged in to offset the effect of the pandemic is rising inflation and interest rates, which could depress stocks.

"We will see a spike in inflation as early as the middle of the year," Mr. Ackman said. "It is already starting to happen. At some point if rates move enough than it becomes a market risk event."

Mr. Ackman said he had bought "instruments that pay off in a large way in the event of a surprising move in rates".

3) It will be interesting to see the effect of rising interest rates on the housing market (see this article in yesterday's Wall Street Journal: 30-Year Mortgage Rate Tops 3% for First Time Since July).

Obviously, higher rates mean less purchasing power, but I think the housing market will continue to be robust thanks to a strong economy (and presumably, higher wages) and extremely tight inventory.

My wife and I saw this last week when we were in Park City, Utah. While we love New York City and have no plans to move, we liked the area (especially Deer Valley) so much that we met with a real estate agent to learn more about the possibility of buying out there. She told us that the market is white-hot, which didn't surprise us given how many people are looking to get out of big cities – either permanently or at least for part of the year.

Nevertheless, I was surprised to see just how little housing inventory there is nationwide, as this New York Times article discusses: Where Have All the Houses Gone? Excerpt:

Much of the housing market has gone missing. On suburban streets and in many urban neighborhoods, across large and midsize metro areas, many homes that would have typically come up for sale over the past year never did. Even in cities with a pandemic glut of empty apartments and falling rents, it has become incredibly hard to buy a home. 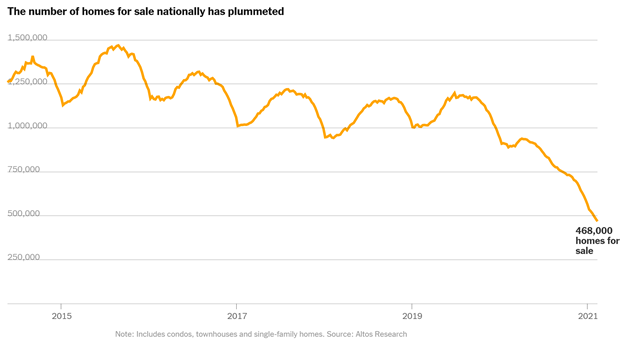 All this certainly makes me even more bullish on the homebuilder stock we recommended a month ago in our Empire Stock Investor newsletter!

And it's trading below our buy-up-to price... You can find out how to gain immediate access to this recommendation right here.