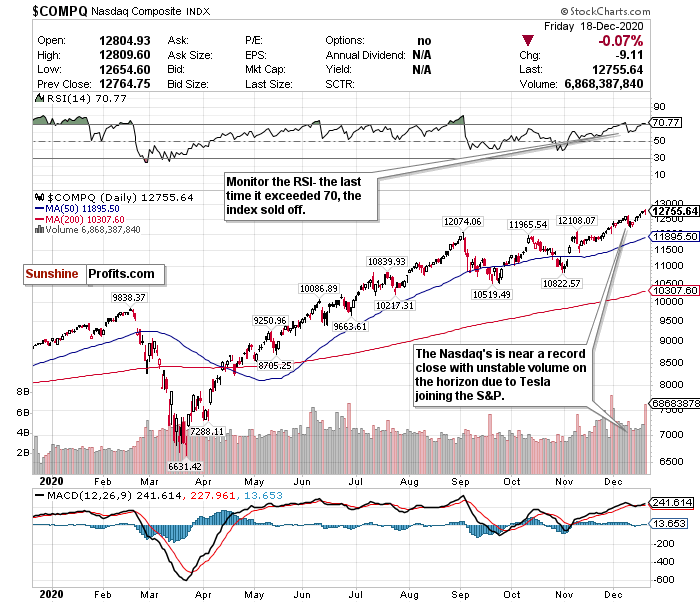 Dear readers, before we get into today’s news and stock analysis and because I’ve been receiving many questions from you, I’d like to first clarify what I mean by BUY, SELL, or HOLD. Here, I am largely referring to outperforming the S&P 500. When the conditions favor adding risk and buying the U.S. market overall, I will be issuing an “alert.” I am not sure yet whether I will be moving to entry prices or target prices & stop losses, however, I have discussed this internally with the team at Sunshine Profits. In the current market environment, when fundamentals have essentially fallen to the wayside, I prefer to invest directionally rather than being married to certain levels in the market. In my view, trading with specific figures in mind can hurt long term returns if you do not let your winners run and cut your losers fast. I do update my calls daily, though, and any changes will be highlighted! Thank you again for being such great readers – I truly value your trust. Stay tuned for updates and let me know if you have any other questions!

Let’s begin Monday by reviewing what happened at the close of last week.

Volatile trading occurred on Friday (Dec. 18), with Congress struggling to close out a stimulus package, causing stocks to slip from record highs.

A Stimulus Package For Christmas

While the general focus between both investors and analysts appears to be on the long-term potential in 2021, there are certainly short-term concerns. Inevitably, there will be a short-term tug of war between good news and bad news. For now, though, the main catalyst is the stimulus package. If a stimulus package is passed before Christmas, the markets could benefit. If it doesn’t, markets will drop. Time is running short and we may be at a fork in the road.

According to Luke Tilley , chief economist at Wilmington Trust, another stimulus package was needed to keep the economic recovery from stalling before the mass distribution of a vaccine.

“With the continued rising cases and mass vaccinations still a ways out, we could see some further weakness in jobs and even a flattening where we’re not even adding jobs at all … that’s absolutely a possibility for this next jobs report,” Tilley said. “And if we were to not get another stimulus package, you’re going to have 10 to 11 million people fall off the unemployment rolls right away, and that would hit spending as well.”

However, despite near-term risks, the overwhelming majority of market strategists are bullish on equities for 2021, especially for the second half of the year. While there may be some short-term worries, the consensus between market strategists is to look past the short-term pain and focus on the longer-term gains. Although the economic recovery could stutter in the early half of the year, the general focus is on the second half of the year when we could potentially return to normal. Many analysts expect double-digit gains to continue in 2021, with strategists in a CNBC survey expecting an average 9.5% rise in 2021 for the S&P 500.

“I am pretty bullish on the second half of next year, but the trouble is we have to get there…As we all know, we’re facing a lot of near-term risks. But I think when we get into the second half of next year, we get the vaccine behind us, we’ve got a lot of consumer optimism, business optimism coming up and a huge amount of pent-up demand to spend out with very low interest rates.”

In the short-term, there will be some optimistic and pessimistic days. On some days, the broader “pandemic” market trend will happen, with cyclical and recovery stocks lagging, and tech and “stay-at-home” stocks leading. Sometimes a broad sell-off based on fear or overheating may occur as well. On other days, there will be a broad market rally due to optimism and 2021-related euphoria. Additionally, there will be days (and in my opinion this will be most trading days), when markets will trade largely mixed, sideways, and reflect uncertainty. But if we get an early Christmas present and a stimulus package passes, all bets are off. It could mean very good things for short-term market gains.

Despite the optimistic potential, the road towards normalcy will hit inevitable speed bumps. While it is truly hard to say with conviction that a short-term rally or bear market will come, I do believe that some consolidation and a correction could be possible in the short-term on the way towards another strong rally in the second half of 2021.

Outside of economic damages and an out-of-control virus, the market itself is flashing potential signs of over-optimism and euphoria. In its most recent survey, for example, the American Association of Individual Investors (AAII) found that 48.1% of investors identified as being bullish – well above the historical average of 38%. With an overabundance of cocky, euphoric, and optimistic investors, the market becomes more vulnerable to selling pressure. Corrections are very common though. Only twice in the last 38 years have we had years WITHOUT a correction (1995 and 2017). Because there has not been one since the lows of March, we could be due for one in the early part of 2021.

While there is long-term optimism, there are short-term concerns. A short-term correction in early 2021 is very possible, but I do not believe, with certainty, that a correction above ~20% leading to a bear market will happen.

Has the Nasdaq Officially Overheated?

Don’t ever let anyone tell you “this time is different” if fears of the dot-com bubble are discussed. History repeats itself, especially in markets. I have many concerns about tech valuations and their astoundingly inflated levels. The recent IPOs of DoorDash (DASH) and AirBnB (ABNB) reflect this. I believe that more pullbacks along the lines of Wednesday, December 9th’s session could inevitably come in the short-term.

Pay close attention to the RSI. While an overbought RSI does not automatically mean a trend reversal, I called keeping a very close eye on this for the Nasdaq. The December 9th Nasdaq pullback, after it exceeded a 70 RSI, reflects that.

The RSI is now above 70. Monitor this . With unstable volume to start the week on the horizon, as Tesla officially joins the S&P 500, I am calling for some short-term volatility. I did not make a conviction call last week but I am not making that mistake again. Because the RSI is officially above 70, and because I foresee unstable volume thanks to Tesla, take profits and SELL some shares, but do not fully exit .

While tech has overheated, there is still some very real long-term optimism based on stimulus hopes and 2021’s potential.

Furthermore, on pessimistic days, having Nasdaq exposure is crucial because of the “stay-at-home” trade.

Thank you for reading today’s free analysis. I encourage you to sign up for our daily newsletter – it’s absolutely free and if you don’t like it, you can unsubscribe with just 2 clicks. If you sign up today, you’ll also get 7 days of free access to the premium daily Stock Trading Alerts as well as our other Alerts. Sign up for the free newsletter today!

All essays, research, and information found above represent analyses and opinions of Matthew Levy, CFA and Sunshine Profits’ associates only. As such, it may prove wrong and be subject to change without notice. Opinions and analyses were based on data available to authors of respective essays at the time of writing. Although the information provided above is based on careful research and sources that are believed to be accurate, Matthew Levy, CFA, and his associates do not guarantee the accuracy or thoroughness of the data or information reported. The opinions published above are neither an offer nor a recommendation to purchase or sell any securities. Mr. Levy is not a Registered Securities Advisor. By reading Matthew Levy, CFA’s reports you fully agree that he will not be held responsible or liable for any decisions you make regarding any information provided in these reports. Investing, trading, and speculation in any financial markets may involve high risk of loss. Matthew Levy, CFA, Sunshine Profits’ employees, and affiliates as well as members of their families may have a short or long position in any securities, including those mentioned in any of the reports or essays, and may make additional purchases and/or sales of those securities without notice.