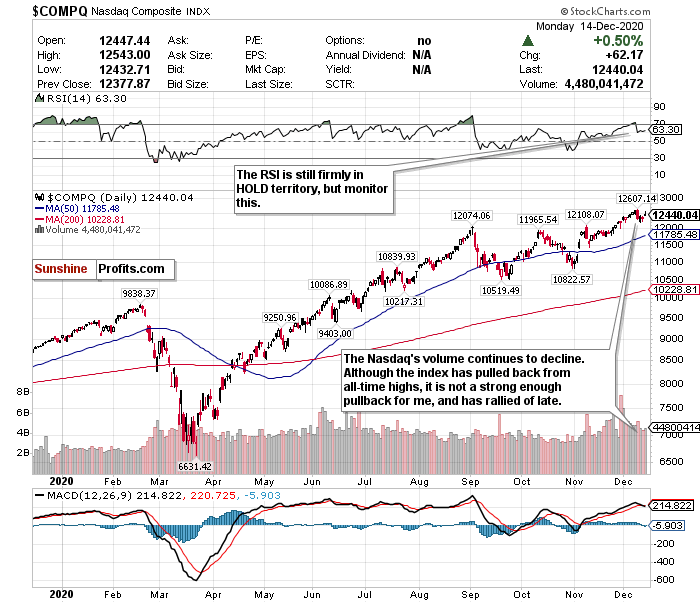 Getting Back To Normal

While the short-term may see some pain and/or mixed sentiment, the mid-term and long-term optimism is certainly very real. Overall, the general consensus between market strategists is to look past short-term painful realities and focus more on the longer-term - a world where COVID-19 is expected to be a thing of the past and we are back to normal.

According to Robert Dye, Comerica Bank Chief Economist : “I am pretty bullish on the second half of next year, but the trouble is we have to get there...As we all know, we’re facing a lot of near-term risks. But I think when we get into the second half of next year, we get the vaccine behind us, we’ve got a lot of consumer optimism, business optimism coming up and a huge amount of pent-up demand to spend out with very low interest rates.”

Other Wall Street strategists are bullish about 2021 as well. According to a JPMorgan note to clients released on Wednesday (Dec. 9), a widely available vaccine will lift stocks to new highs in 2021:

“Equities are facing one of the best backdrops for sustained gains next year,” JPMorgan said. “We expect markets to be driven by recovery from the COVID-19 crisis at the back of highly effective vaccines and continued extraordinary monetary and fiscal support.”

On the other hand, for the rest of 2020, and maybe early on into 2021, markets will wrestle with the negative reality on the ground and optimism for an economic rebound.

Additionally, the rally since election week invokes concerns of overheating with bad fundamentals. Commerce Street Capital CEO Dory Wiley advised caution in this overheated market. He pointed to 90% of stocks on the NYSE trading above their 200-day moving average as an indication that valuations might be stretched:

“Timing the market is not always well-advised and paring back can miss out on some gains the next two months, but after such good returns in clearly a terrible fundamentals year, I think taking some profits and moving to cash, not bonds, makes some sense here,” he said.

In the short-term, there will be some optimistic and pessimistic days. Some days, like Monday (Dec. 14), will reflect what the broader “pandemic” trend has been - cyclical and recovery stocks lagging, and tech and “stay-at-home” stocks leading. On other days (and in my opinion this will be most trading days), markets will trade largely mixed, sideways, and reflect the uncertainty. However, if a stimulus deal passes before the end of the year, it could mean very good things for short-term market gains. It is possible that there could be a minor compromise reached before the end of the year, however, a more large-scale comprehensive package may not be agreed to until 2021.

In the mid-term and long-term, there is certainly a light at the end of the tunnel. Once this pandemic is finally brought under control and vaccines are mass deployed, volatility will stabilize, and optimism and relief will permeate the markets. Stocks especially dependent on a rapid recovery and reopening, such as small-caps, should thrive.

Due to this tug of war between sentiments, it is truly hard to say with conviction whether another crash or bear market will come.

While there is long-term optimism, there is short-term pessimism. A short-term correction is very possible. But it is hard to say with conviction that a big correction will happen.

On Pessimistic Days, Tech is Crucial...But There are Concerns

Tech shares led the markets on Monday (Dec. 14) and reflected a return of the “stay-at-home” trade - possibly due to Mayor De Blasio’s “shut down” comments about New York City. However, I believe these are short-term moves rather than a return of long-term trends. I do not believe there is “market nostalgia” for the way the indices traded largely from April through the end of October.

Although I believe tech exposure is important during pessimistic trading days, I have many concerns about tech valuations and their astoundingly inflated levels. Last week’s IPOs of DoorDash (DASH) and AirBnB (ABNB) reflect this and invoke traumatic memories of the dotcom bubble era. I believe that more pullbacks along the lines of last Wednesday (Dec. 9) are inevitably coming in the short-term and would make me feel far more confident about initiating tech positions at lower valuations for the long-term.

After exceeding an overbought RSI level of 70, the pullback last Wednesday (Dec. 9th) brought it back down to a healthier level. While its current RSI of 63.30 is still pretty high, it is not quite overbought and still a hold. But monitor this . If the index goes on another bull-run and exceeds 70, then you may want to consider selling some. While an overbought RSI does not automatically mean a trend reversal, it does not help the overvaluation of the market and possible correction. The NASDAQ’s pullback last Wednesday (Dec. 9), after it exceeded a 70 RSI, reflects that.

The decline in volume since the start of the month is also quite concerning for volatility purposes. Low volume, especially a declining trend, means that there are fewer shares trading. Lower volume also means less liquidity across the index, and an increase in stock price volatility.

On pessimistic days, like Monday (Dec. 14), having NASDAQ exposure is crucial because of all the “stay-at-home” stocks that trade on the index. However, positive vaccine news always induces the risk of downward pressure on tech names - both on and off the NASDAQ. But what concerns me most are sharp sell-offs due to overheating and mania. Don’t ever let anyone tell you “this time is different” if fears of the dot-com bubble are discussed. History repeats itself - especially in markets.

It is very hard to say with conviction to sell your tech shares though. A further correction would not shock me in the least. But again, there is so much unpredictability right now, and truly anything could happen. The one thing I can confidently say though, is that if the RSI exceeds 70 again, then you should consider selling. For now, however, the NASDAQ stays a HOLD .

For an ETF that attempts to directly correlate with the performance of the NASDAQ, the Invesco QQQ ETF (QQQ) is an excellent option.