ValueWalk
Home Business News Analytics: A Cocktail For Investors In The BioPharma Sector? 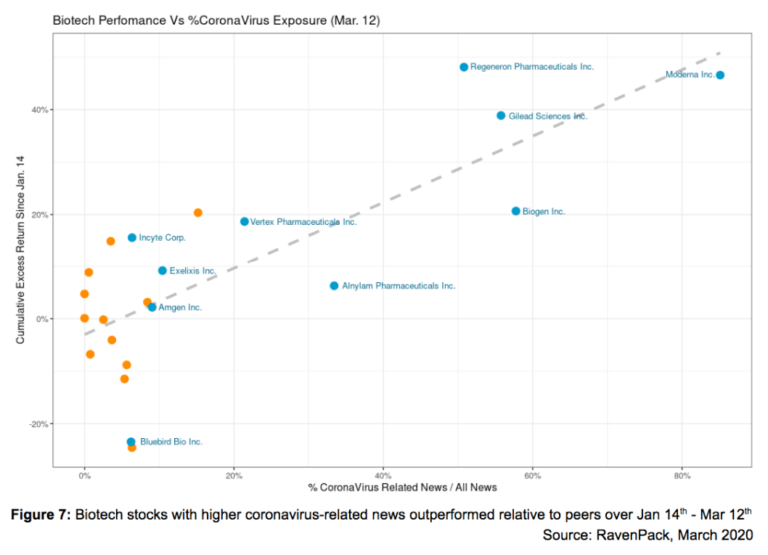 The COVID-19 pandemic has shaken almost every aspect of day-to-day life in 2020. Nevertheless through it all, financial markets have remained open, so as we reach the waning weeks of this challenging year, it’s natural to look for winners and losers. One of the sectors which have seen the greatest gains is BioPharma, for the obvious reason that companies within it are responsible for producing the accessories, cures, and vaccines used in the fight against the virus.

Identifying The High Performers In The BioPharma Sector

Within the sector itself some companies have outperformed their peers and it’s interesting to determine if news analytics could have helped investors identify the high performers in that sector.

Previous studies suggest that it can. Research from earlier in the year uncovered a close connection between the number of times a company was co-mentioned with COVID-19 in the news and changes in its share price.

The conclusion was that BioPharma stocks with “a higher co-mention volume with the virus were also the top performers in their sector,” wrote Peter Hafez, Chief Data Scientist, at RavenPack.

The chart below shows the close correlation between co-mention volume for BioPharma companies and their cumulative excess returns during the period between the middle of January and March 2020. 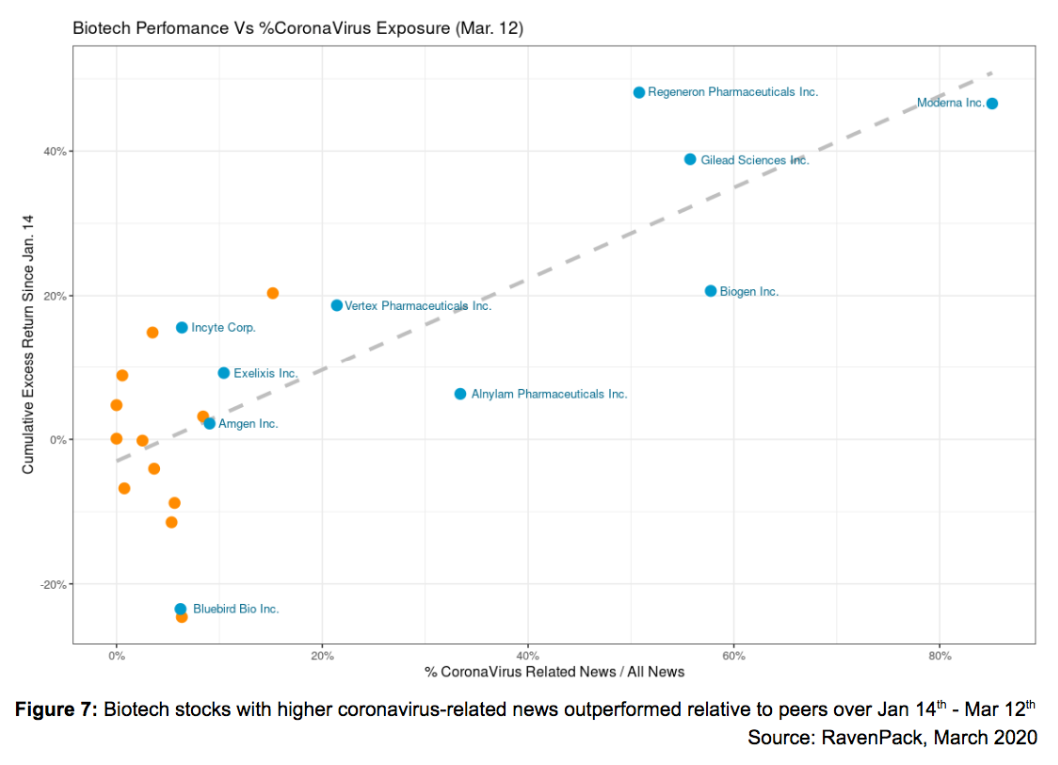 The same chart a month earlier shows that there were already signs then which companies would go on to be the eventual top performers in March, suggesting news analytics has predictive value. 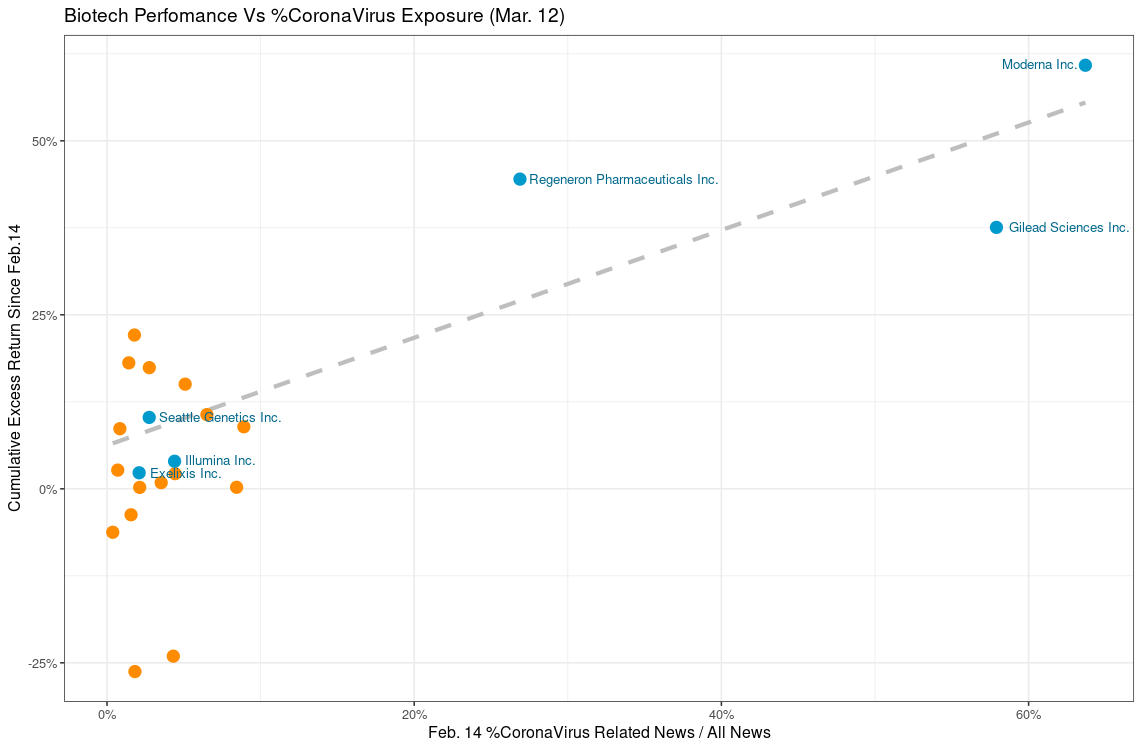 Figure 8: Excess returns based on % Coronavirus News on February 14.

Let’s dig further. As the rollout begins of the first set of vaccines couldr news analytics have provided any clues as to which Pharma companies would be the first to develop an efficacious vaccine?

We decided to compare historical media exposure for Pharma companies that had successfully developed a vaccine and those that had not - or not yet.

The charts below show media exposure - or volume of news - from the start of the year for the 3 companies, Pfizer, Moderna and AstraZeneca, that have so far successfully seen their vaccines pass trials. 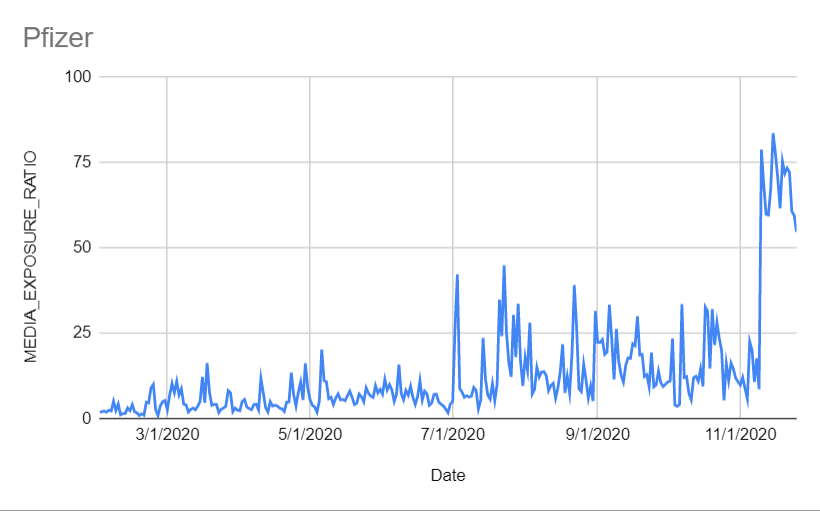 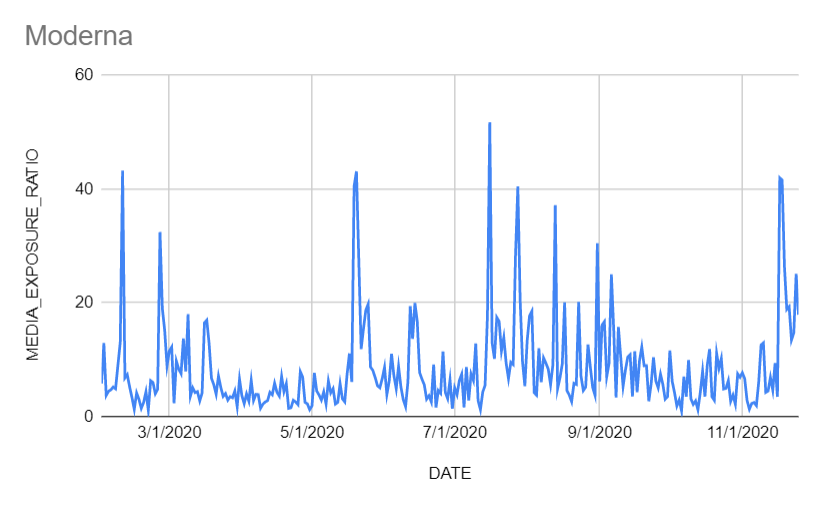 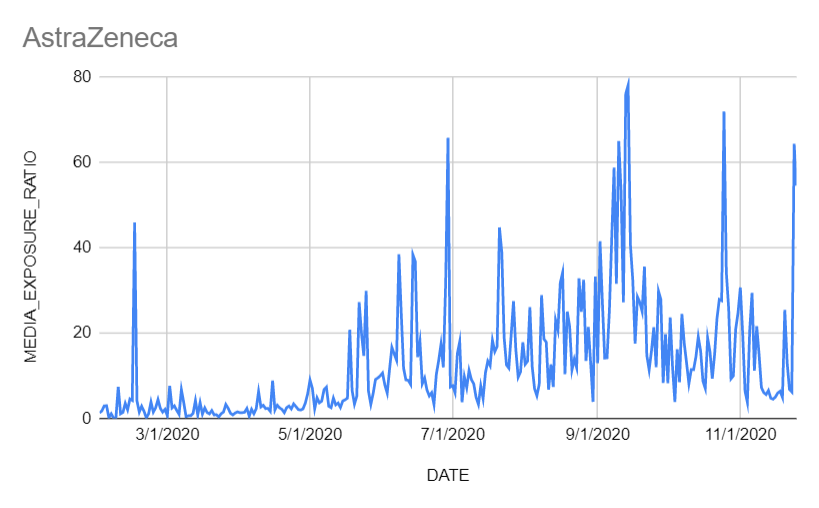 Now compare this to the 3 major pharma companies who have not confirmed the successful development of a vaccine yet - Johnson & Johnson, Roche and Merck & Co., whose charts are below: 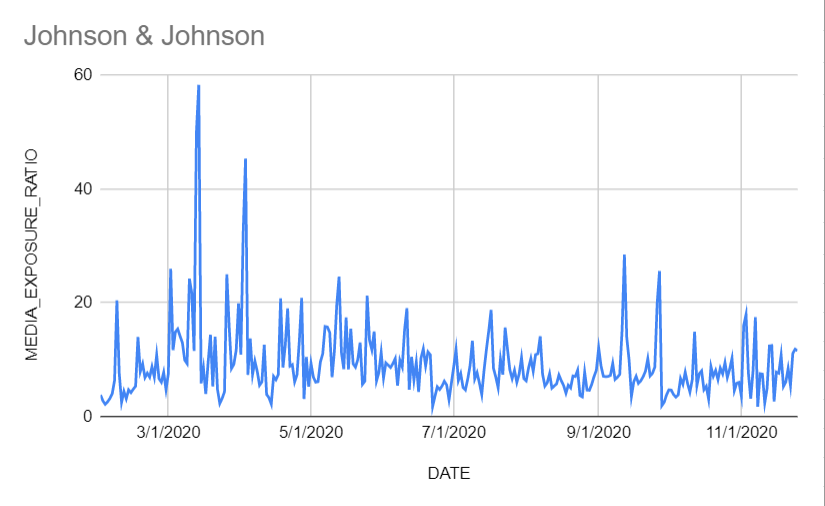 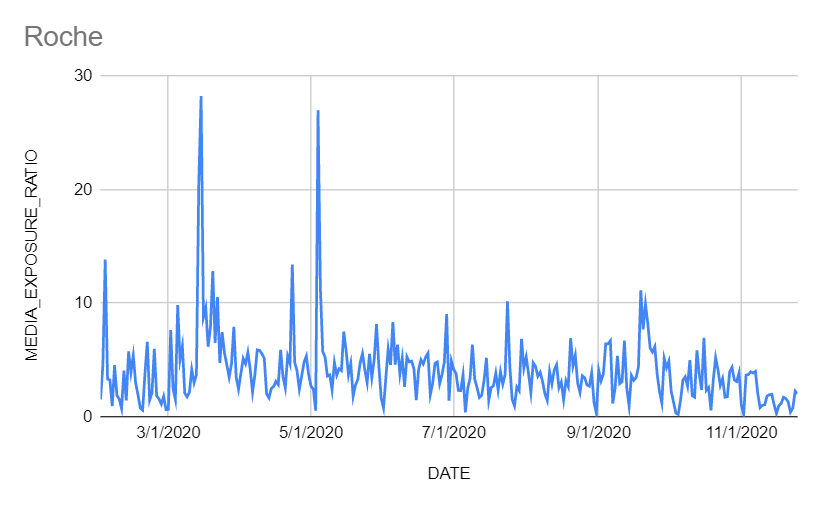 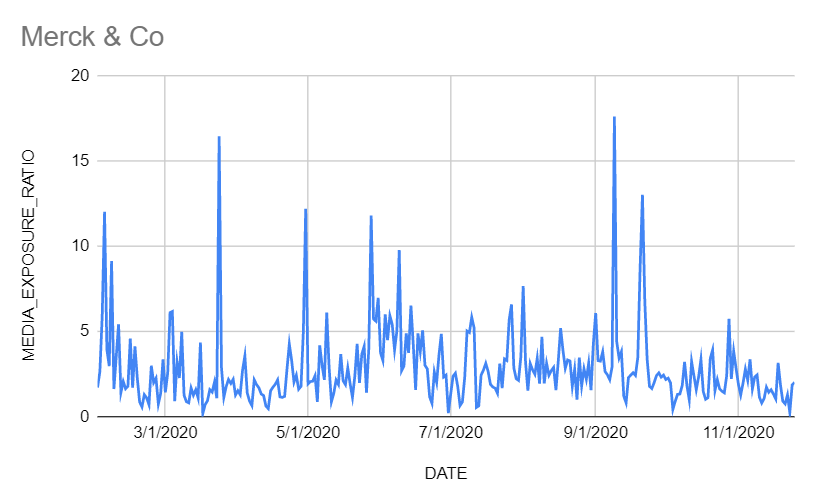 One clear difference between the two is that the early developers consistently exhibited higher media exposure ratios over the sample period compared to the others.

The early vaccine developers, on the other hand, showed a trend towards increasingly higher percentage exposure as time went on, and consistent peaks above 20%.

To make the comparison more representative we went on to compare the average of all 4 companies that had developed a vaccine (including BioNTech this time) and 6 big pharma non-winners.

The 3 additional Big Pharma companies that had not yet developed a vaccine were Novartis AG, Sanofi and AbbVie. The chart below shows these two groups in a final comparison that brings both time series together on the same chart. 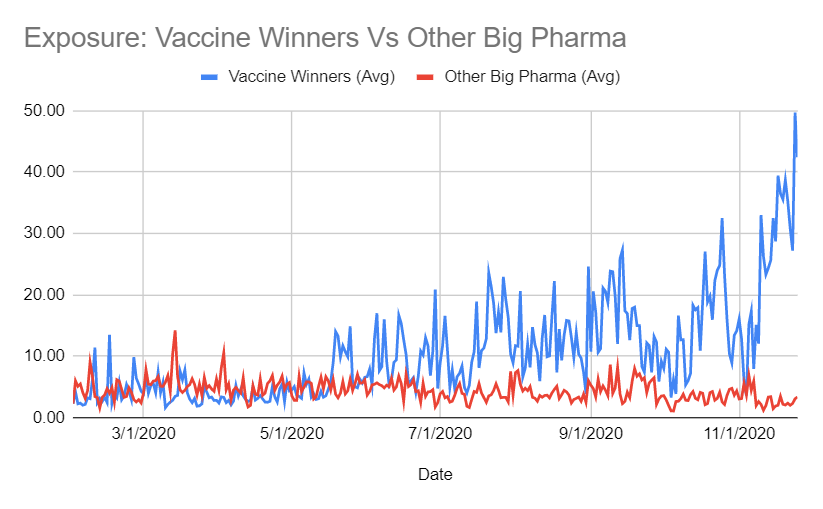 From as early as June, the eventual race ‘winners’ were already pulling away from the rest, which in hindsight could have provided a predictive model for their eventual success.

Even before the pandemic research showed RavenPack news analytics possessed a value in analyzing the BioPharma sector.

by an independent advisory firm showed that the market did not appear to efficiently price in many important news events in the BioPharma sector and this could provide investors with an opportunity to generate alpha.

In the case of news announcing a new drug’s patent approval, for example, the rise in the stock price on the day of the release was often quite modest.

Yet, the effect of the approval would often be to provide the stock with a bullish ‘backdraft’ for up to a year ahead during which time it would continue drifting higher as it steadily absorbed the consequences of the positive news release.

Stocks that benefited in this way would make an average of 7.0% more than the sector over the next year. 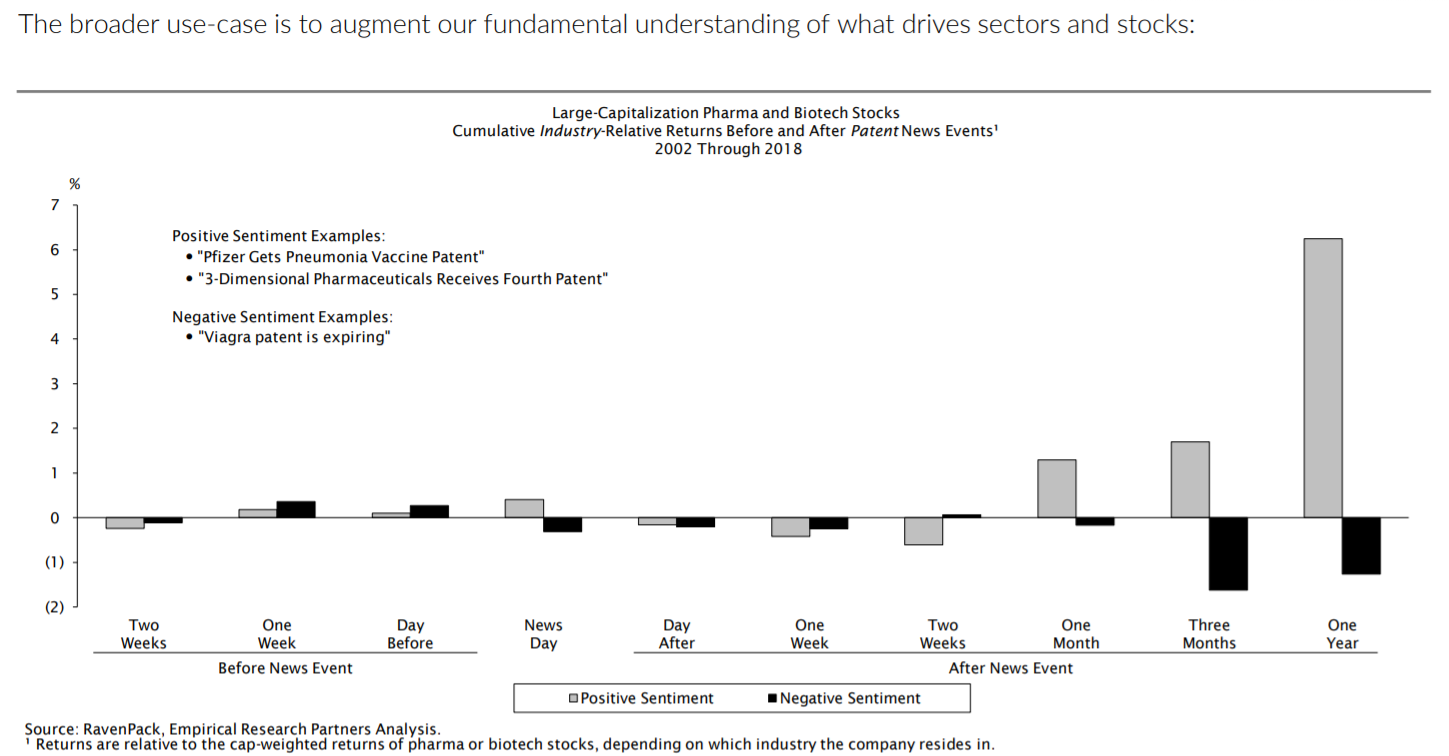 The chart above shows the impact of patent approvals on stock prices for different periods, from 2-weeks before the approval to 1 year ahead.

“So what you can see in the middle of the chart is that on the news day, if you do get a positive patent approval, yes the stock does bump up a little bit but not huge, but what is really intriguing is that by the end of the year - so one year later - the stocks that had positive patent news on average outperformed their sector by 6-700 basis points. And those that have negative patent news underperformed by 100-150 on average,” says Rochester Cahan, the U.S Portfolio Strategist at Empirical Research Partners, the firm that carried out the study.

Patent news is not the only event not efficiently priced in by the market.

The chart below shows the one-year returns following other major BioPharma news events. 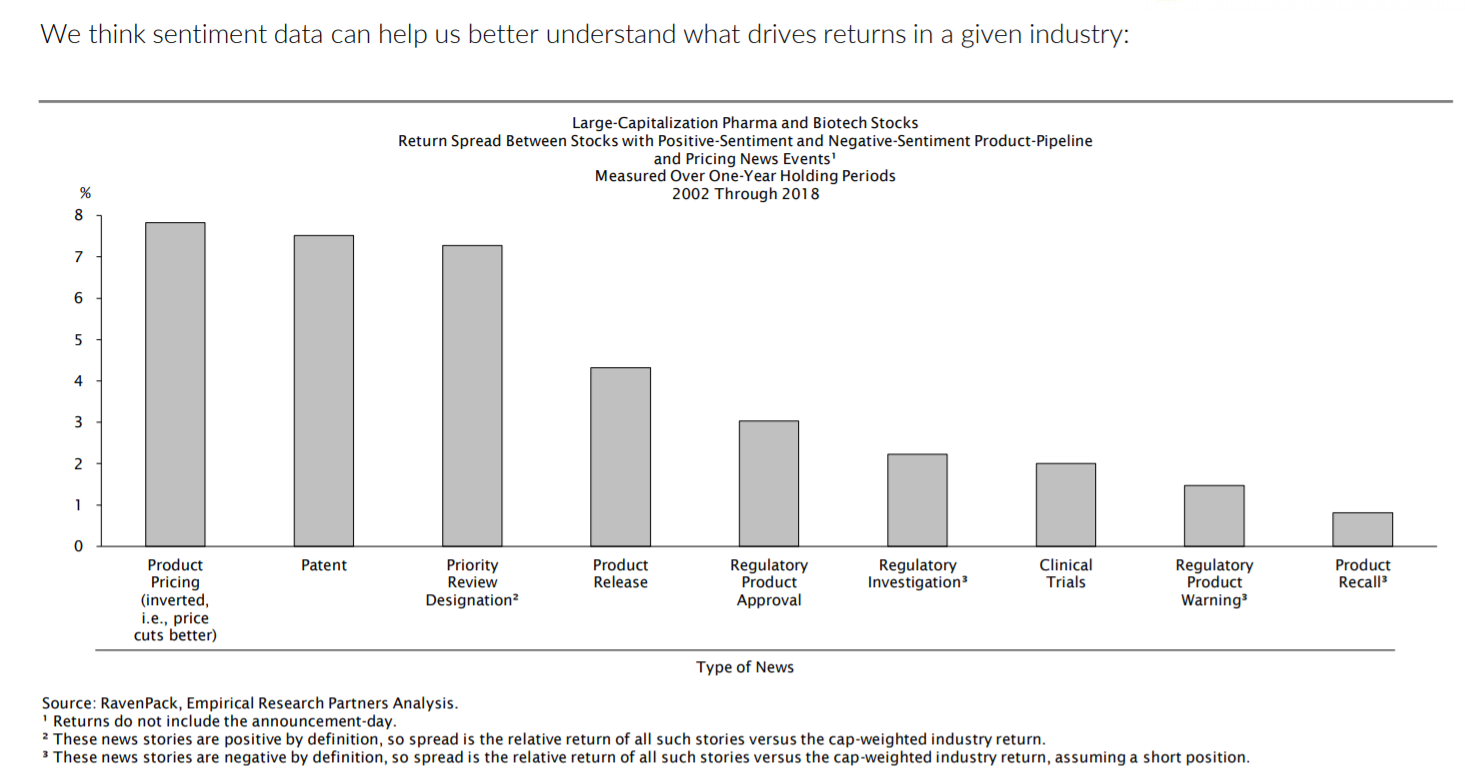 The event which generated the highest returns was ‘product pricing’.

In this case, it was found that RavenPack’s news sentiment worked in a contrarian fashion.

The explanation for the contrarian effect was twofold. Firstly the announcement of cheaper drugs evidenced efficiency, prudence and competitiveness on the part of the maker - all positive predictors for future profitability.

Secondly, the announcement of cheaper drugs meant less of a risk that the company would be involved in drug pricing scandals.

It is the RavenPack platform’s unique ability to measure event sentiment as opposed to merely entity sentiment which enables users to take advantage of the strategies outlined above.

“One of the really cool things about the RavenPack database is that you have in that something that is called ‘event sentiment’, so instead of calculating sentiment for the entire news story, what the technology does is actually identify pre-defined events that can occur to companies, so, you know, like ‘announced earnings’ or ‘subject of a takeover’,” says Cahan.

BioParma is particularly well suited to the data because of all its ‘moving parts’ which create a lot of high-value news events.

Yet it is not exclusively useful in BioPharma - the data is also valuable in many other sectors.

“In every industry, you can probably find events that are underpriced by the market, at least, initially,” concludes Cahan.

Traders can easily tackle Alternative Data with the RavenPack Analytics Platform, which includes sentiment data on over 300,000 individual entities and 6,800+ market-moving events, available on visual dashboards or via web APIs.