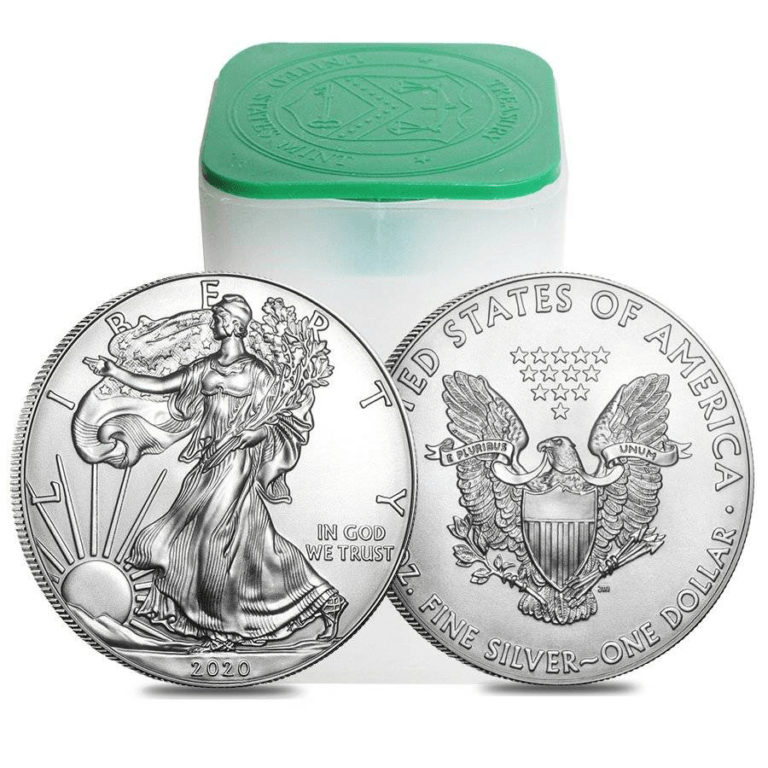 As one of the most popular silver investments in the industry, the American Silver Eagle coins saw multiple special releases this year. If you are a new investor, or a seasoned one trying to keep up, we assembled a list of the 2020 Silver Eagle coins. These coins are in consecutive order, and each month listed is an estimate of the time when the Silver Eagle coins were issued. Because of the pandemic, there were major production delays at the US Mint. However, this list is based on the US Mint’s 2020 Production Schedule. 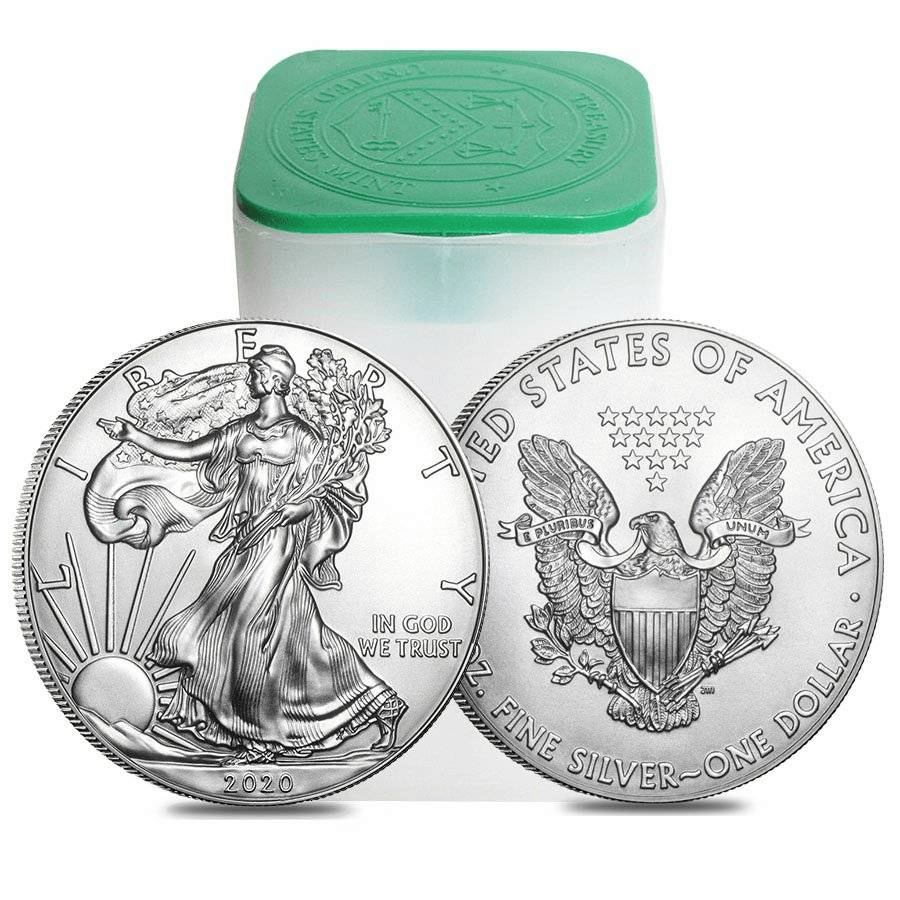 The 2020 ASE Coin (BU) is a classic investment option that collectors grab each year. What is most notable about this ASE coin is that it is one of the final coins depicting the original reverse design. A new illustration will replace the beloved John Mercanti-style US Seal image later in 2021. This new illustration will depict a realistic American Bald Eagle in mid-flight. Although the new design faces heavy criticism from loyal collectors, the new coins arrive equipped with security features, still TBA. 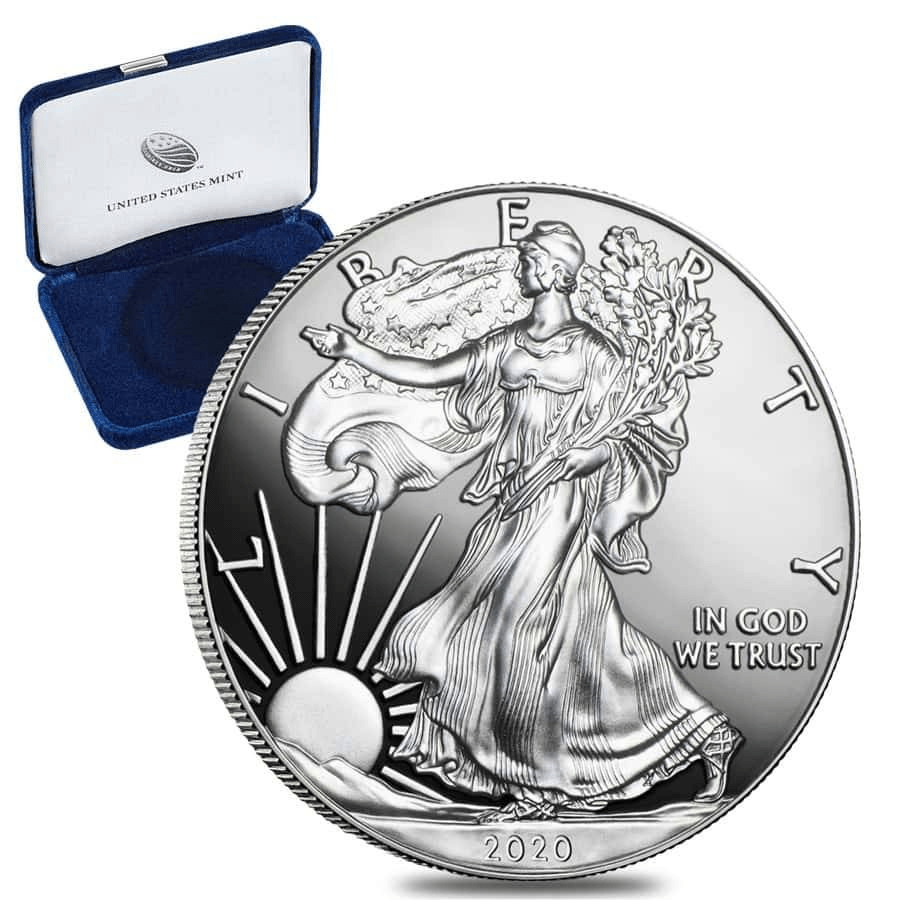 Finally, the Congratulations Set is a special Silver Eagle release that has attained steady popularity since it was first released in 2017. These Proof ASE coins are ideal gifts for people to celebrate any achievement such as a graduation, anniversary, and more! 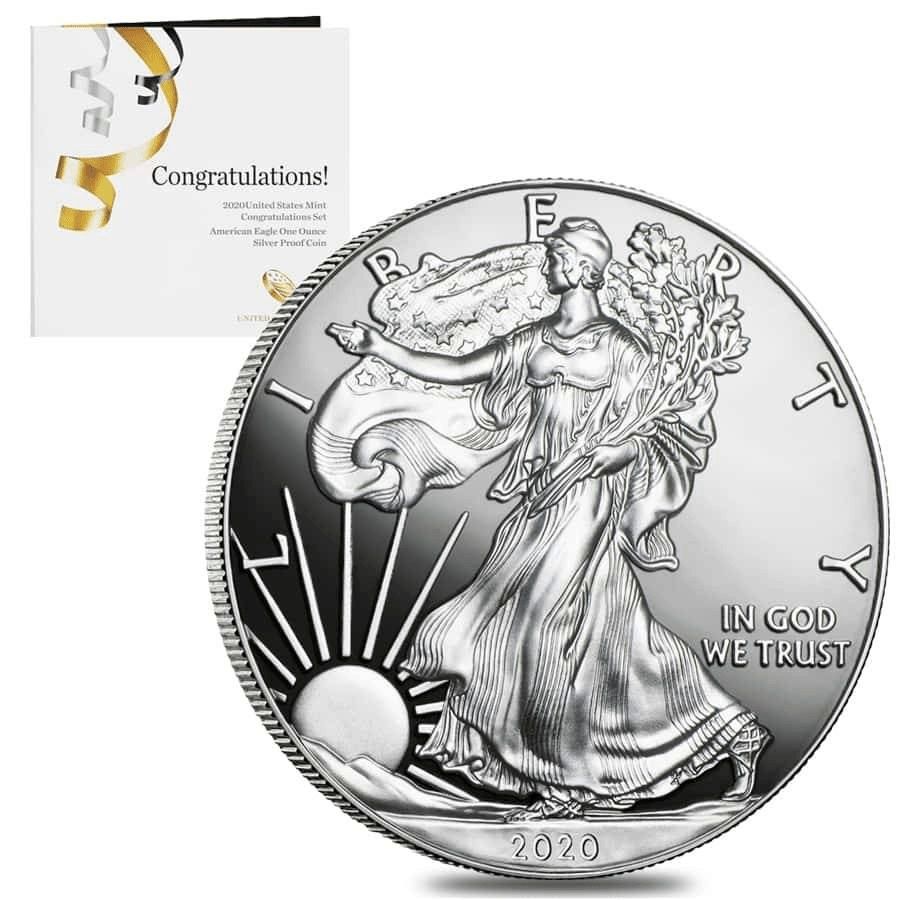 In May, investors and collectors were able to grab their West Point Mint Silver Eagles. However, this edition does not have the West Point mintmark. These coins may have been slated to release earlier, but by this time, the world was still in the beginning throes of the pandemic. As a result, we had some special releases for the Silver Eagles. 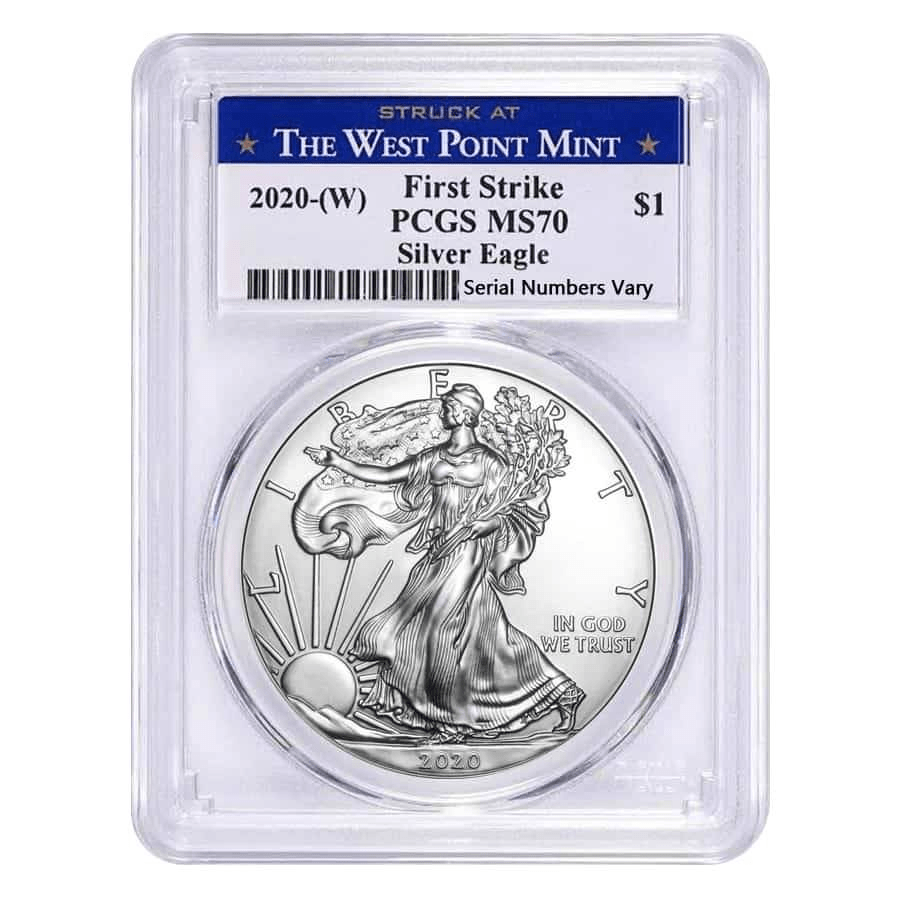 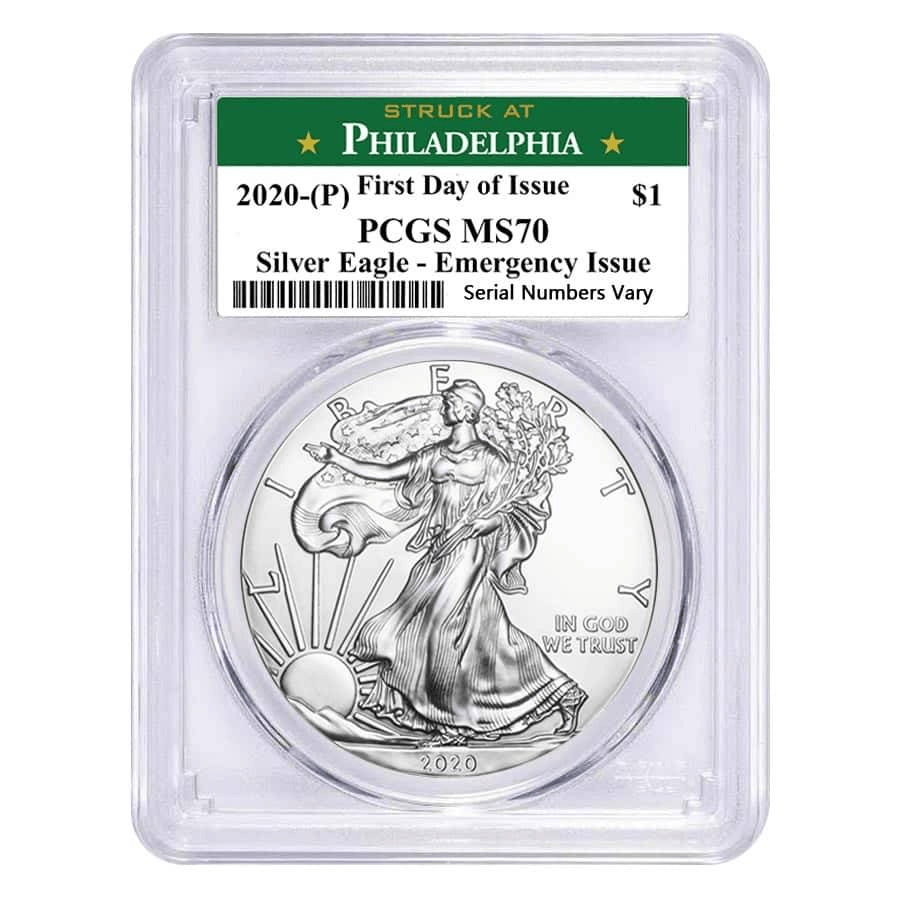 There is only one way to know if your 2020 Silver Eagle is from this mint at this point. If you want one of these Emergency Issue coins, buy only the NGC or PCGS authenticated Philadelphia 2020 Silver Eagle coins so you can be sure they come from a reputable source. 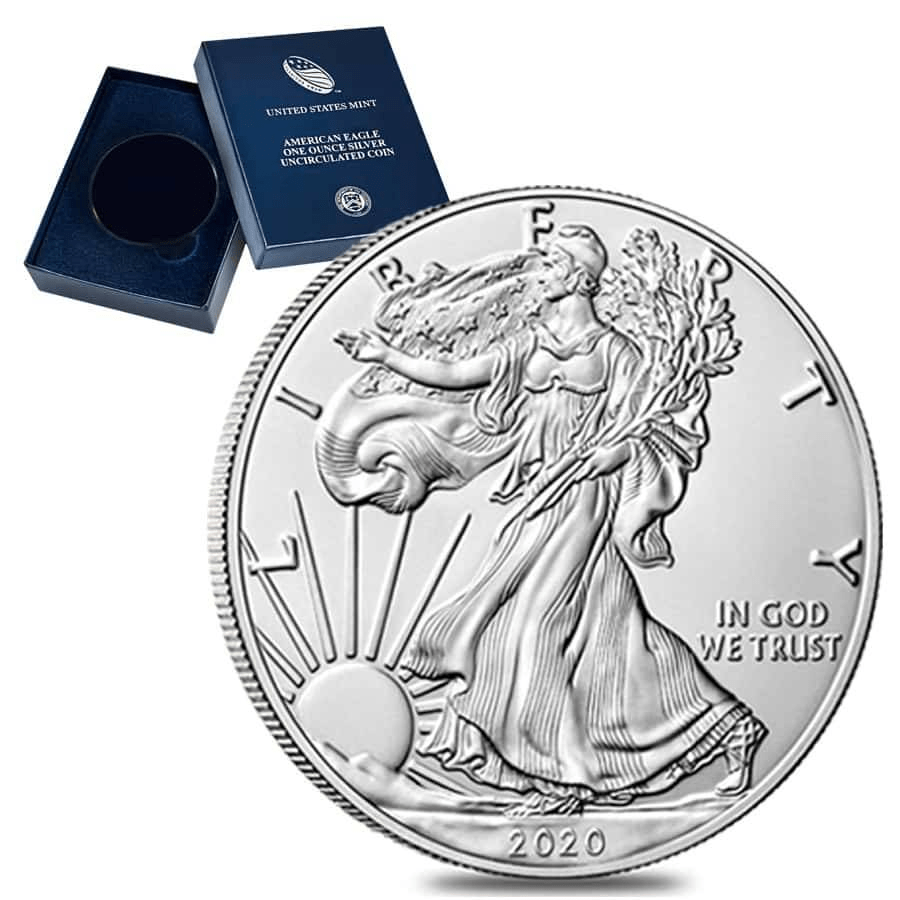 Additionally, Burnished ASE coins are the only official burnished coins in the collecting world. On the US Mint website, they call burnished coins “uncirculated”. Collectors hold these coins in high regard because they believe burnishing the ASE coins makes their finish last longer.

The American Silver Eagles that came out in October/early November were somewhat of a surprise to the bullion industry. The San Francisco Emergency Silver Eagles are a unique release this year for two reasons. The first reason being is this is the second Emergency Issue Silver Eagle coin related to the pandemic. 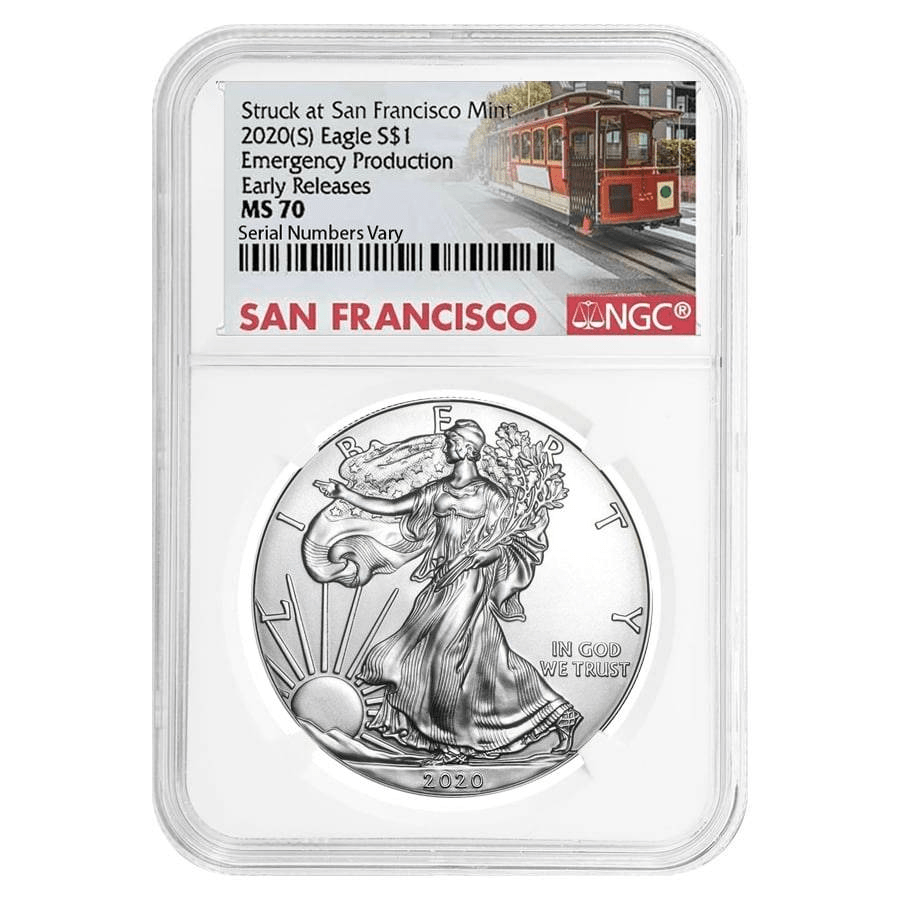 Second and lastly, the 2020-S Proof Silver Eagle is an important release because this is one of the last Silver Eagle coins to feature the John Mercanti reverse design. However, these are particularly special because they were minted in San Francisco. This is a truly significant coin since San Francisco is the first mint to ever create the Silver (and Gold) American Eagle coins. As a result, this coin is a commemorative release honoring the interconnectedness of the Silver Eagle with this specific facility. Since the original design is about to be discontinued, it only makes sense to honor its history with this facility. Keep in mind that only 200,000 of these exist!

Finally, the V75 Privy Silver Eagle coin is one of the most important Silver Eagles of the year. This is because, one, the Silver Eagles never had a privy mark until now. And two, this privy mark honors the 75th Anniversary of the end of WWII. 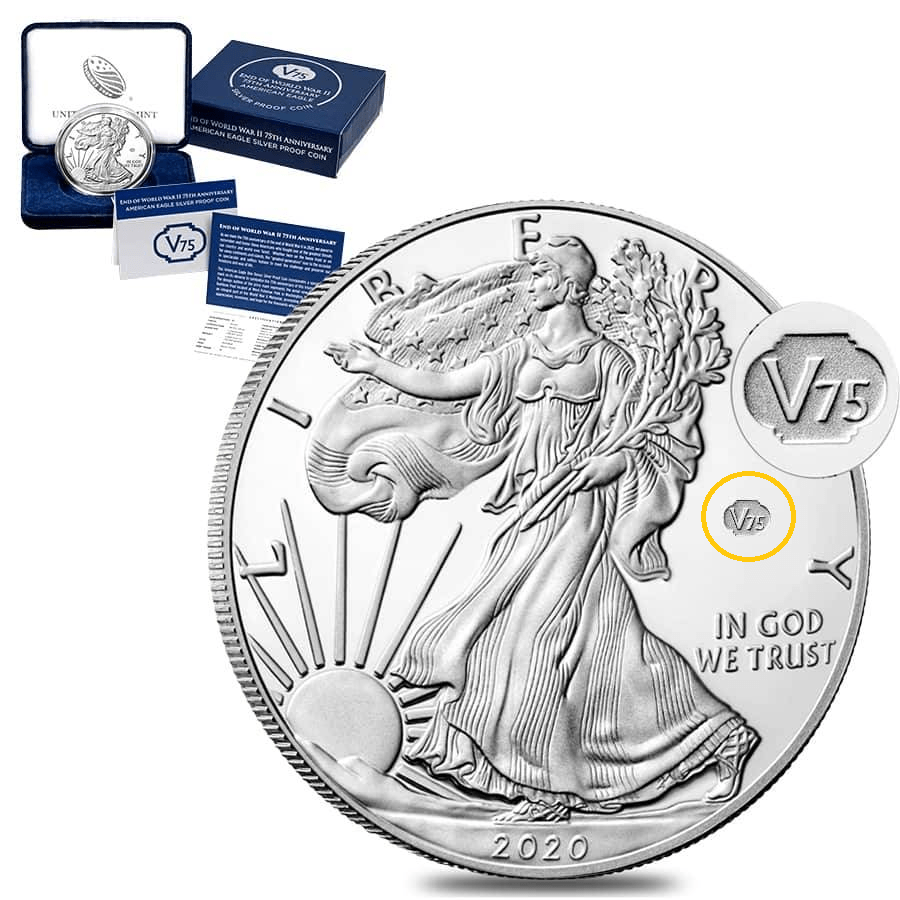 Although the V75 privy mark appears simple, it carries heavy symbolism. If you take a closer look at the V75 privy Silver Eagle, you might notice the border is highly irregular. This is because the shape is inspired by the Rainbow Pool memorial in Washington DC. The Rainbow Pool was not originally a part of the WWII memorial, but it was later absorbed and integrated as part of it. Inside this border lies “V” and “75”, which signifies the “victory” for the Allied Powers and the anniversary year. Only 75,000 of these V75 Silver Eagle coins exist!

Even rarer are the Gold V75 Eagles with a mintage of only 1,945. However, you might notice on new circulating 2020 coins that there is a V75 privy mark as well...

While the Silver Eagles production in 2020 faced irregularities and surprise editions, these coins remain some of the most collected of this year. In fact, the US Mint’s website crashed several times in 2020 as collectors and investors tried to buy coins at the launch time directly from the mint! If you are still investing in 2020 Silver Eagle coins, we hope this list helps you understand the major releases of this year and helps you find which one is best for you.