These are the 76 companies that reached unicorn ($1billion) status in 2020 – including Gymshark, Udemy and more…

What Is A Unicorn?

A ‘unicorn’ is a term used in the business world to describe a privately owned startup that is worth more than $1 billion, including the likes of Airbnb, Roblox, and, as of this month, Tipalti too, after they hit a valuation of more than $2 billion, bringing total funding raised to date to around $280M million.

While millions of startups spring up each year, only a handful ever make a success of it, which is why a private billion-dollar startup is so rare (hence why it’s called a unicorn!).

As 2020 draws to a close, the team at Tipalti has taken a look at some of the businesses that have joined this elite club in the last year, as well as a deeper dive into the characteristics of a unicorn.

The research revealed that 76 new companies have joined the exclusive unicorn club in 2020 (as of October), slightly fewer than in previous years, with none of those 76 quite reaching 'decacorn' status yet (that’s a privately owned startup with a valuation of over $10m).

The top ten most valuable companies which have reached unicorn status in 2020:

The Most Valuable Unicorn

The most valuable of these is the National Stock Exchange of India, at a value of $6.5m, with other notable new unicorns including the learning marketplace Udemy, fitness clothing brand Gymshark, and of course, Tipalti! 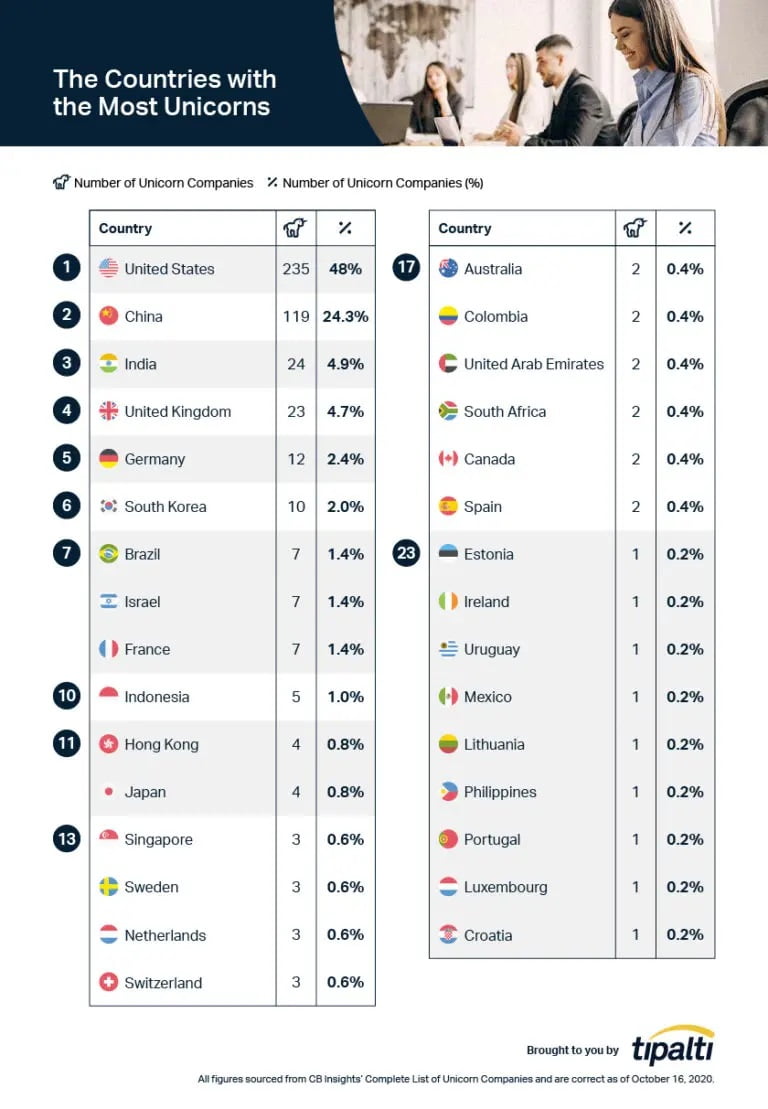 The country with the second-highest amount of unicorns was China, with 119 (24.3%), including fashion brand SHEIN and ByteDance, the world’s only ‘hectocorn’ (valued at over $100bn). The majority of the world’s unicorns come from a small handful of countries, with the US and China alone accounting for 72%, followed by India (4.9%), the UK (4.7%), and Germany (2.4%). 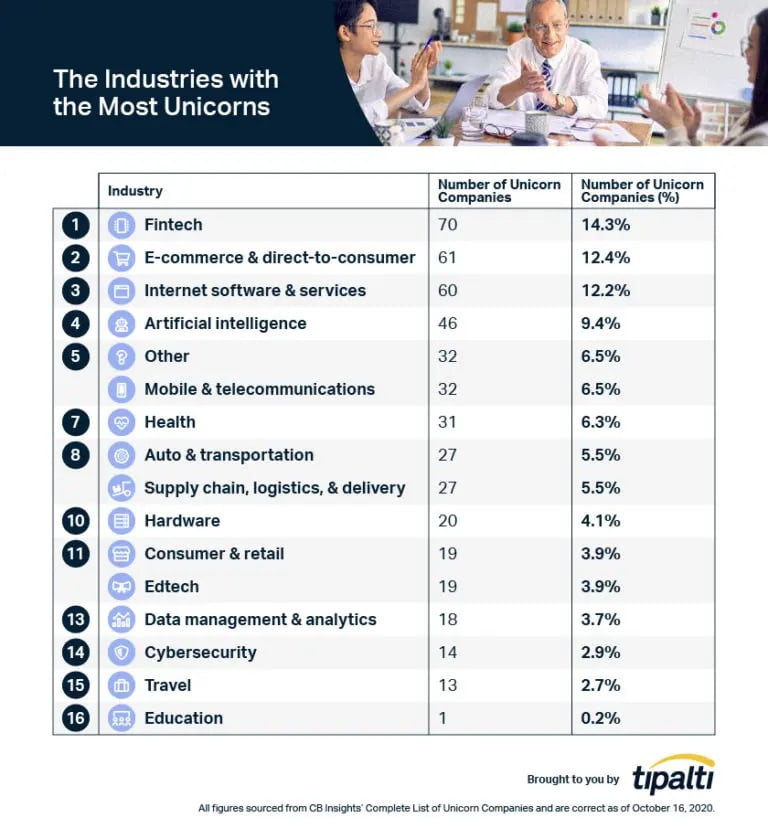 Industries That Have Made It To Unicorn Status

When it came to different industries, the technology industry was in the lead by far, although there was a spread of industries that have made it to unicorn status this year. More unicorns fell into the fintech niche than any other, with 70 (14.3%), followed by e-commerce (12.4%) and internet software and services (12.2%).

Even for those businesses which fall into a more traditional sector, many unicorns provide tech solutions to their respective sectors such as Airbnb, in the travel sector.

The world’s most valuable unicorn by some distance (and the world’s only current ‘hectocorn’) is ByteDance, a Chinese tech firm that’s currently worth an estimated $140bn. The Beijing-based company covers over 150 markets worldwide, with over 60,000 employees (double the size of Facebook) - and back in June, the company hit 1 billion active monthly users across its apps.

Amongst the companies that followed ByteDance in the list of most valuable unicorns were Airbnb, SHEIN, SpaceX and fintech company Stripe.

There are currently 26 ‘decacorns’ (worth over $10m) and between them, they account for 37% of the total value of all unicorn companies. For more information on the 2020 unicorns visit Tipalti.