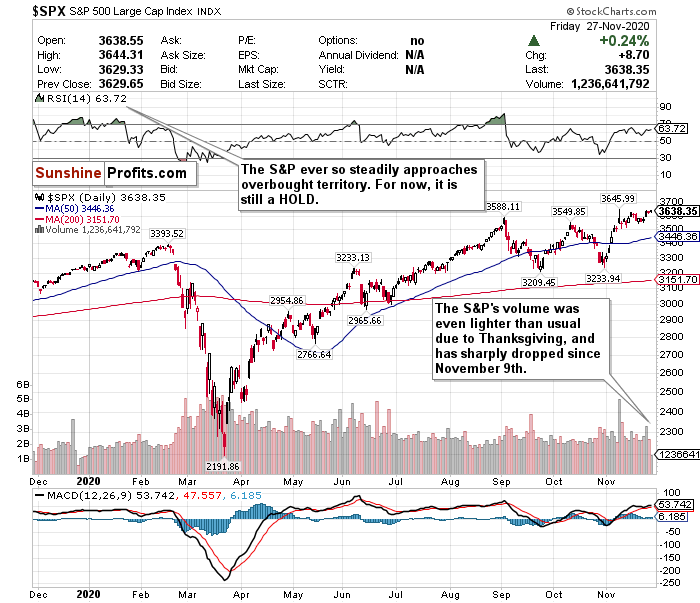 Although the Dow did not end the week above 30,000 after piercing past that level for the first time ever on Tuesday, markets performed strongly this week and continued November’s surge. For the week, The Dow and S&P 500 rose 2.2% and 2.3%, respectively, while The Nasdaq gained nearly 3%. The small-cap Russell 2000 once again led the way and gained nearly 4%.

For the month, there has been euphoria and bullish mania consuming the markets due to political clarity after a bitter election, as well as positive vaccine data from three separate candidates. The Dow is up 12.9% in November to Friday's close, and on track for its biggest monthly gain since January 1987. The S&P 500 and Nasdaq are also up 11.3% and 11.9%, respectively. The small-cap Russell 2000, however, has led the way and is on track for its best month ever, up about 20%.

However, there are still very real concerns that could cap gains. Initial jobless claims this past week reached their highest level in 5 weeks, and increased to 778K in the week ended November 21st, compared to the revised level of 748K in the week before. This was also significantly worse than market expectations of 730K. US personal income also unexpectedly fell by 0.7% from a month earlier in October of 2020 compared to flat market expectations. Covid-19 also continues to ravage the country. More than 200,000 COVID-19 cases were reported in the U.S. on Friday - an all time high. When you consider that just three weeks ago we were reporting 100,000 cases a day, this is alarming and as bad as it’s ever been. After Thanksgiving, things could very well take an even harsher turn for the worse

Tug Of War Between Optimism And Reality

Because of the short-term tug of war between optimism and reality, it is fairly difficult to proclaim BUY or SELL calls for the near-term future. Rather, in the short-term, I feel more comfortable staying neutral and calling HOLD for broader markets. There will be optimistic days where investors rotate into cyclicals and value stocks.

In the mid-term and long-term, however, there is certainly a light at the end of the tunnel. Once this pandemic is finally brought under control and vaccines are mass deployed, volatility will surely stabilize and optimism and relief will permeate the markets. In fact, CNBC personality Jim Cramer said that beating COVID would be like “the end of prohibition.” Stocks especially dependent on a rapid recovery and reopening should thrive.

Although the S&P 500 reached another record close, markets continue to wrestle with the negative reality on the ground and optimism for an economic rebound in 2021. While recent updates on several vaccine candidates have been positive, most recently with Astrazeneca and Oxford University ’s, unprecedented surges in COVID cases combined with further economic damage is certainly concerning. Because of the rapid spread of COVID, lockdown measures have been reimposed around the world. Just this past week, many European countries extended lockdowns while LA reinstituted a 3-week “stay at home order,” for example. This could be very concerning for the S&P. Remember, there is still no stimulus or concrete plan for economic aid. If the jobless claims from this week show us anything, it’s that this economic recovery has a long way to go before returning to pre-pandemic levels. Fear of a double-dip recession is certainly very legitimate.

While there is long-term optimism, there is short-term pessimism. A short-term correction could certainly be on the horizon - especially without fiscal stimulus.

S&P Could Face Some Near-term Pain And Volatility

In this S&P chart, there are several indicators that show that the S&P could face some near-term pain and volatility. While the RSI of 63.72 keeps the S&P in a HOLD category, it has steadily risen throughout this month towards an overbought 70 level.

Pay close attention to the sharp decline in volume as well.

Although volume generally is lighter than usual in the days before and after Thanksgiving, the consistent decline in volume for the S&P has been sharp and swift. This is a red flag.

Low volume, especially a sharp drop in volume, means that there are fewer shares trading. Lower volume also means less liquidity across the index and an increase in stock price volatility. Therefore, this drop in volume puts some serious doubt on the sustainability of the recent rallies and the S&P’s short-term outlook.

We’re in the early recovery phase of the cycle following the COVID-19 recession, but this rapid rebound is under pressure. A pullback would not be a shock… but another surge based on good news would not be a shock either. Because of all of the uncertainty, a HOLD for the S&P is an appropriate call. For an ETF that attempts to directly correlate with the performance of the S&P, the SPDR S&P ETF (SPY) is a good option.