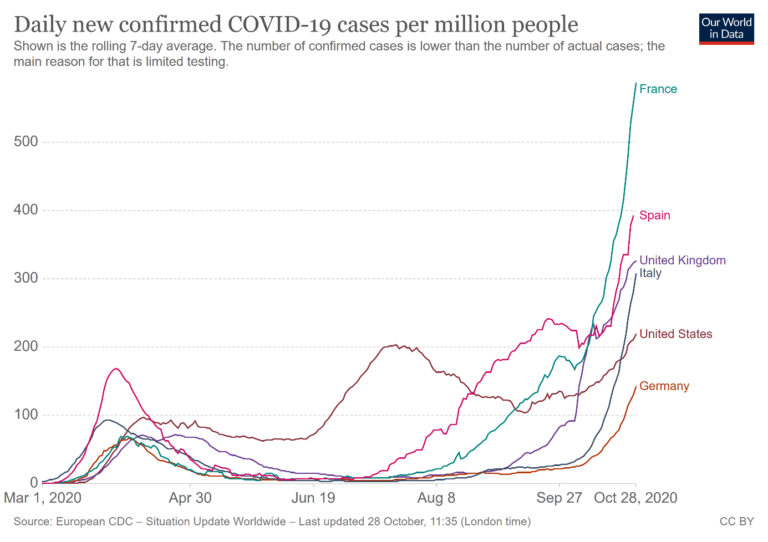 Brace yourselves, winter is coming! This is what Ned Stark in the Game of Thrones told his people to prepare them for the leaner times he saw coming. While one of the biggest threats in GOT were the White Walkers, in our reality, the pandemic is again the greatest danger. As the chart below shows, the second wave of the coronavirus infections is no longer a mere possibility – it’s happening all over the Europe and in the United States (although in the latter country, we could also say about one big wave or three waves). In particular, in France, Italy, Spain, the UK, and in the US, the number of daily new confirmed Covid-19 case per million people has soared much higher than the levels recorded in the spring. And we’ve just entered autumn, with winter yet to arrive… 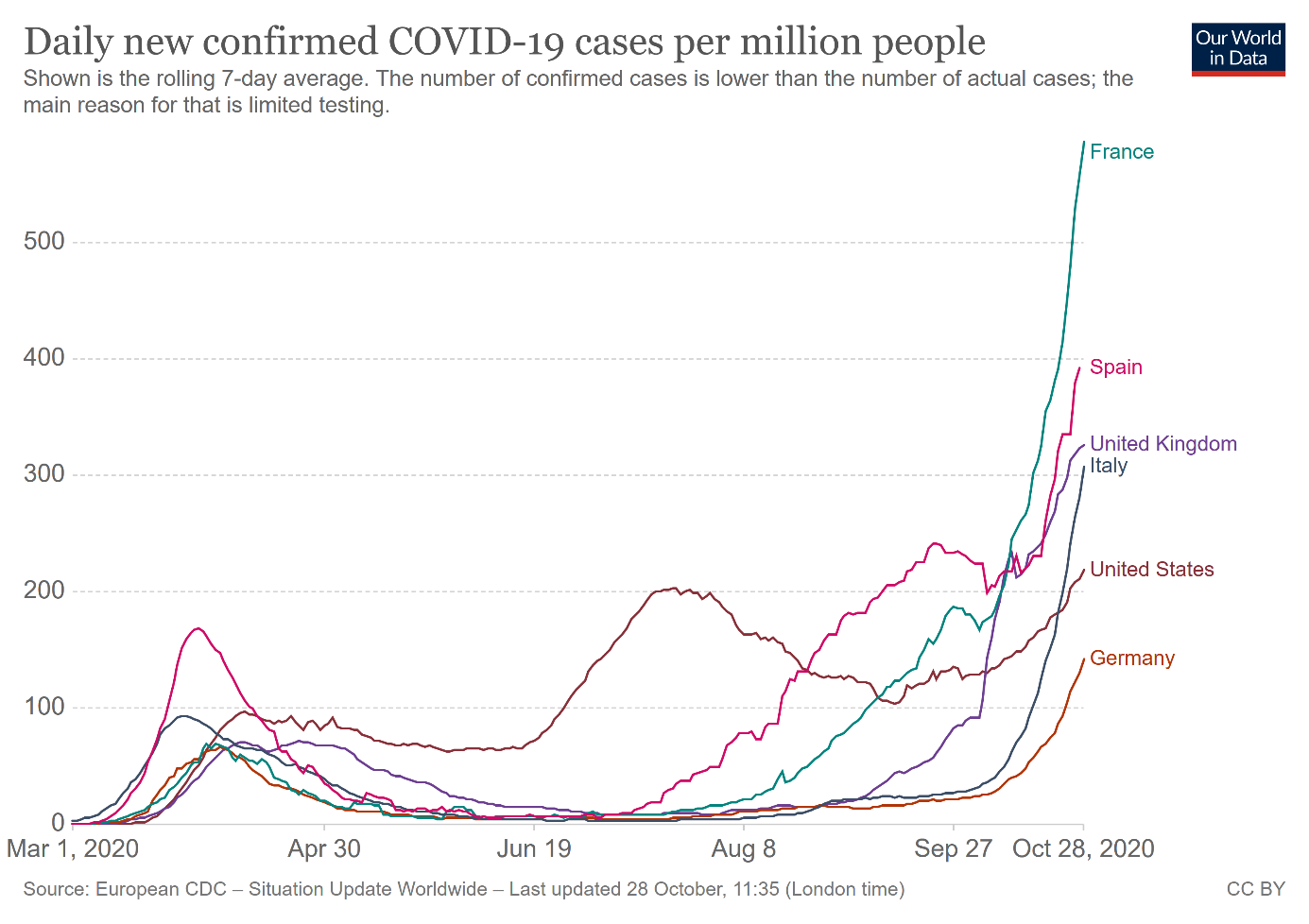 Will There Be Another Lockdown?

Naturally, the question arises - Will governments lock the economies down again? Not likely. And why is that, you might wonder. Well, the cynical answer would be that governments are simply broke and they have no funds for supporting the economy during the next lockdown. The pundits call for fresh stimulus in a response to the spring’s Great Lockdown , so just think how much the government spending and the public debt would have to rise to sustain the economy during the Second Lockdown. It would simply be too much of a cost. After all, when you stop the economy, then the economy is, well, stopped. Without a functionable economy, the social fabric gets destroyed and, after some time, the civilization collapses.

However, there are also less cynical reasons why the lockdown is less likely now, despite the fact that the number of daily infections is higher than in the spring. Half a year ago, the governments and healthcare systems were awfully unprepared to handle the epidemic. From the very beginning, the lockdown was stupid and sub-optimal response – but it could be the only viable solution for the Western governments which neither had implemented procedures for social tracing (like in Asian countries), nor managed to conduct efficient and quick testing, nor secured the sufficient number of masks, respirators, disinfectants, hospital beds, etc.

Currently, the situation is better and the sanitary and healthcare systems are better prepared to handle the epidemic. Indeed, as you can see, despite soaring number of cases, the case fatality rates and the number of deaths due to Covid-19 are significantly lower than in the spring. 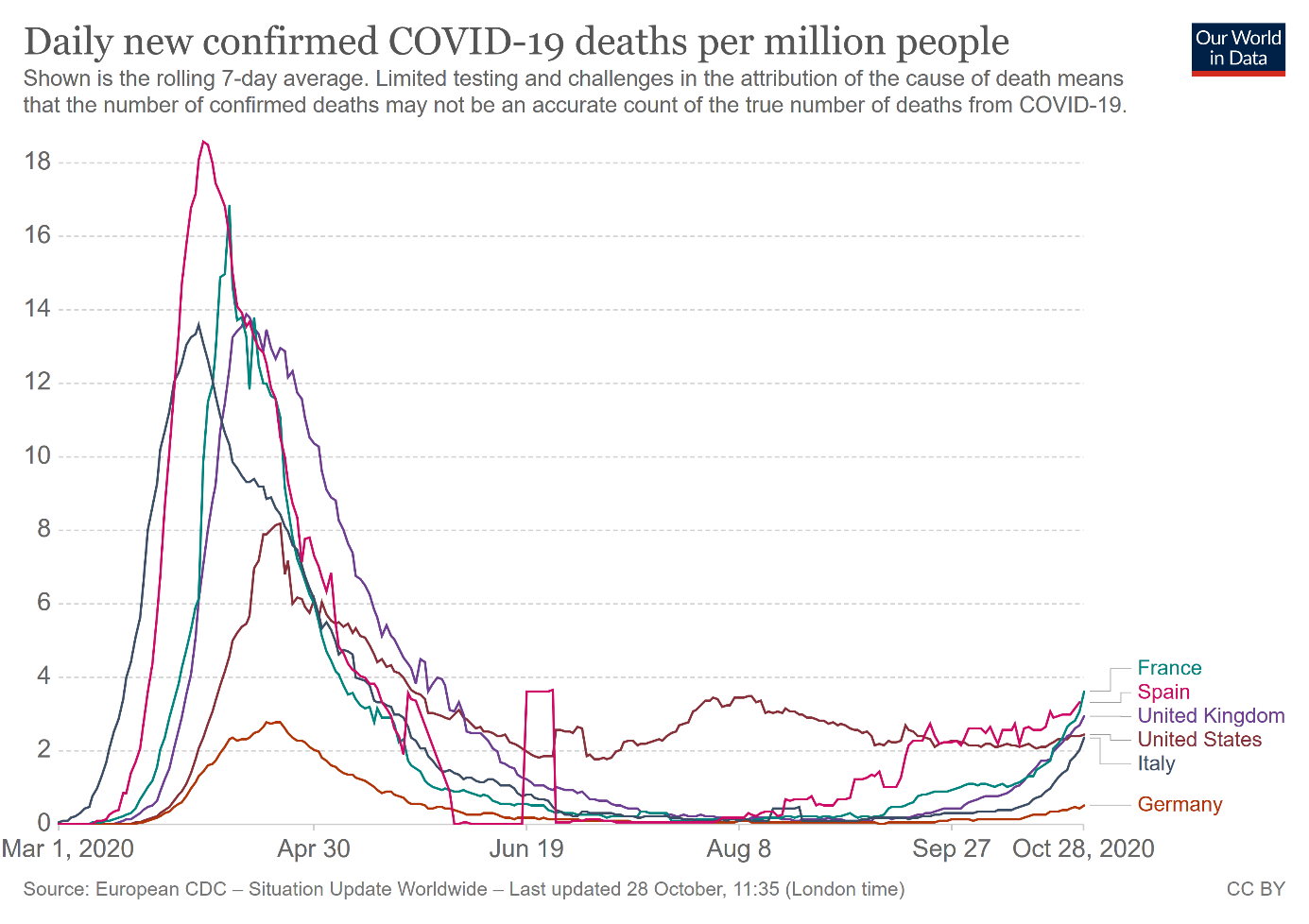 However, if the risk of a healthcare system collapse increases significantly, under the public’s pressure, the governments could be forced to reintroduce a lockdown (although it may not be as strict as the first one).

This is what the Israeli’s government did in September when the pandemic spiralled out of control. As you can see in the chart below, the daily number of Covid-19 cases (rolling 7-day average) reached 700 per million people, more than three times the number in the US. But France is unfortunately approaching this level… 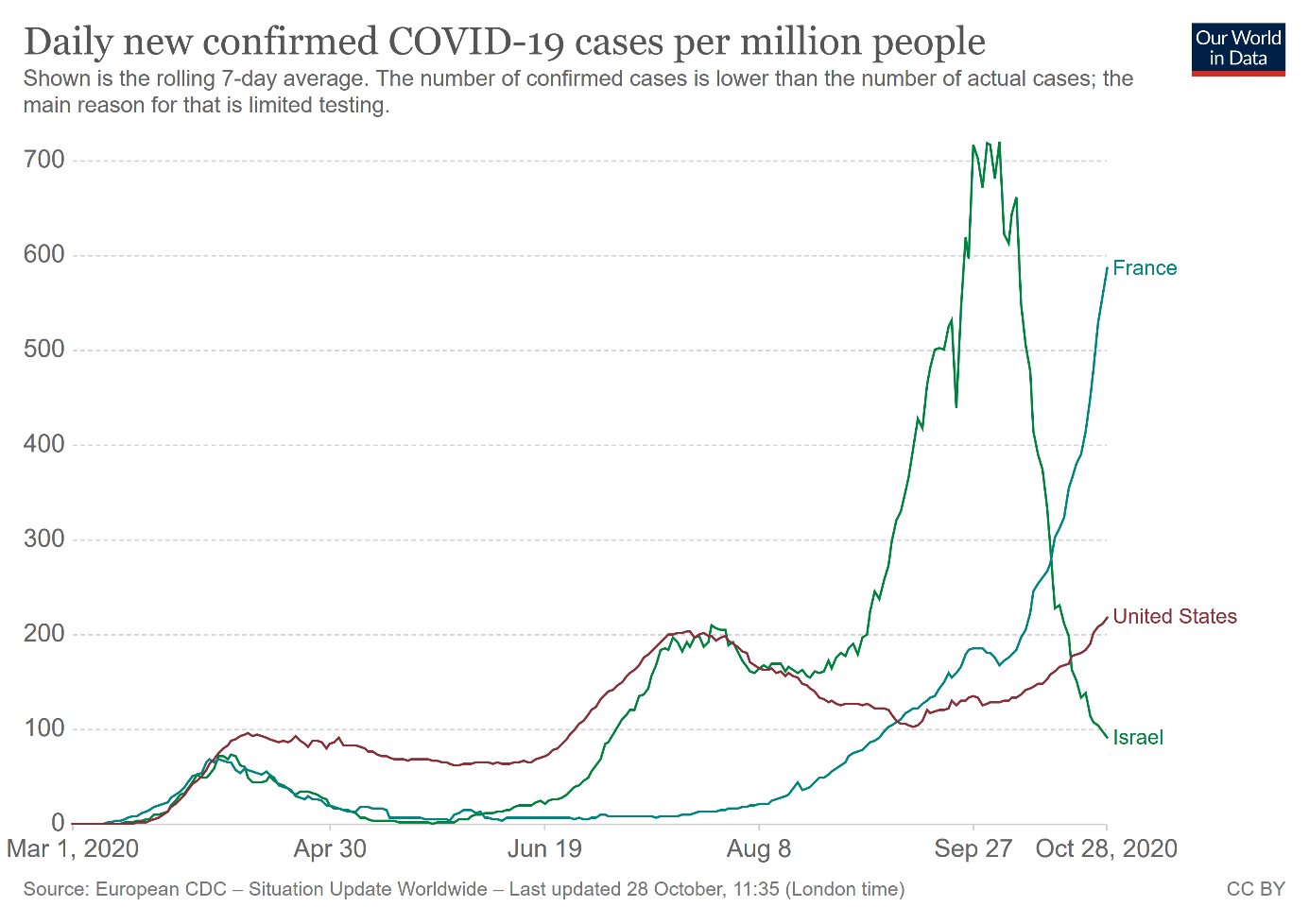 However, Israel’s case shows that the second lockdown wouldn’t be as bad as the first one . So far, we don’t have any hard data about the Israeli economy, but the data from Apple’s devices indicates that people’s mobility fell by around 30 percent after the lockdown was introduced, compared to the 80-percent decline in the spring. Similarly, the major Israeli stock market index (TA-125) plunged about one third half year ago and only (or “only”) ten percent in September. The currency also weakened against the euro, but not above 10 percent as in the spring, but by about 5 percent.

The softer reaction makes sense. In spring, the coronavirus was completely new, and we didn’t know how dangerous it was. As a matter of fact, we still don’t know many things about the new virus, however, we are now more certain about its fatality rate and how to effectively cure the patients and handle the epidemic.

The Impact Of The Second Wave Of Coronavirus On Gold

As I wrote in the June edition of the Gold Market Overview:

The second wave does not have to bring similar effects as the first wave. As people have become accustomed to the epidemic, its impact may be weaker (…) generally people react the most to new, unknown threats, so they should react less vividly in the future to coronavirus-related risks, especially that the authorities should be better prepared.

And this is indeed what we see now: people fear less than in the spring . The virus is no longer a new and unknown threat, it has now become a familiar danger. In other words, the economy has been adjusted to epidemic conditions and subsequent shocks, although still painful, won’t be as shocking as the first one. It means that we will see a slowdown in the pace of economic growth, or even a decline in economic activity in the fourth quarter of 2020 compared to summer, but it should be moderate compared to the spring’s collapse .

What does all of the above imply for the gold market? Well, the replay of the Great Lockdown due to coronavirus would be the best scenario for gold. The moderate economy’s reaction to the second wave of coronavirus would be the worse outcome for gold (although the rush towards cash, which make gold to plunge initially in the spring, will be also limited). However, even a moderate decline in economic activity would be a good excuse to maintain accommodative stance by the Treasury and the Fed . In such an environment, gold should remain in the bull market , although precious metals investors should be prepared for the declining impact of the coronavirus-related threats on the safe-haven demand for gold .