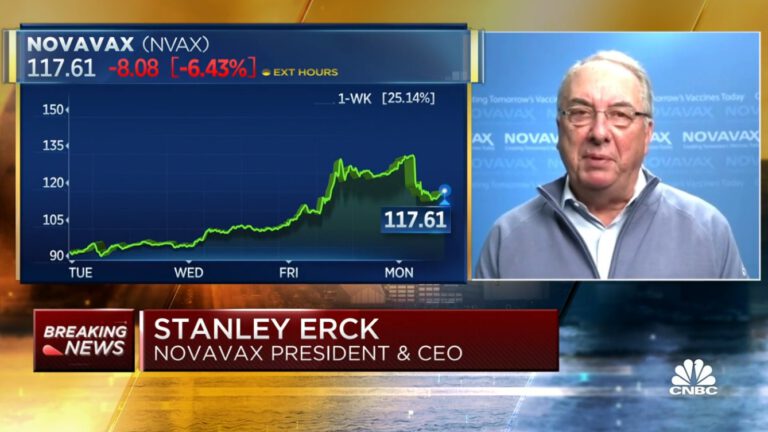 MEG TIRRELL: Melissa thanks so much. And Stan Erck, thanks for being with us this morning. You guys just put out an update on your plans for your late stage trials of your COVID vaccine, you’ve fully enrolled a Phase 3 in the UK and you're expecting data early next year, fully enrolled a Phase 2B in South Africa with data potentially in the first quarter but your US Phase 3 is now being pushed back another few weeks. Tell us about why the delay here in the US.

STANLEY ERCK: No, it's just the typical process of making product at large scale, interacting with the FDA, getting feedback and then getting started. We're on our way.

TIRRELL: And, you know, we've been getting all of this news from Moderna and Pfizer these Phase 3 results showing 95% efficacy for these vaccines, how does that affect Novavax’s path forward with your vaccine?

ERCK: Well, all we can do right now is compare what we're doing with, with what we saw from Moderna and Pfizer in preclinical studies and Phase 1 studies. I think it's good news for everybody that the, the protein that's being used as an antigen to stimulate immune responses, is, is the right protein to use, it’s a spike protein. Our data shows that we have very high levels of protective antibody at T cells against a spike protein. So that's, I think that predicts a good result for, for our vaccine trials as well.

TIRRELL: Do you think as some have suggested now that we do have those positive results for two other vaccines should your vaccine and others be compared against those vaccines are still against placebo?

ERCK: No, I think placebo is the right comparator right now, and there's still plenty of room to, to run a Phase 3 trial so we're, we're the Phase 3 trial in the UK and the 2B trial in South Africa are both compared against placebo and it's the, it's the gold standard right now.

TIRRELL: All right, Stan Erck sorry for such a short period of time we're running up against the end of the show but we really appreciate you being with us this morning and we hope you'll come back soon.

ERCK: Thank you very much. Sure.