ValueWalk
Home Politics Kudlow: There Will Be A Peaceful Transfer Of Power 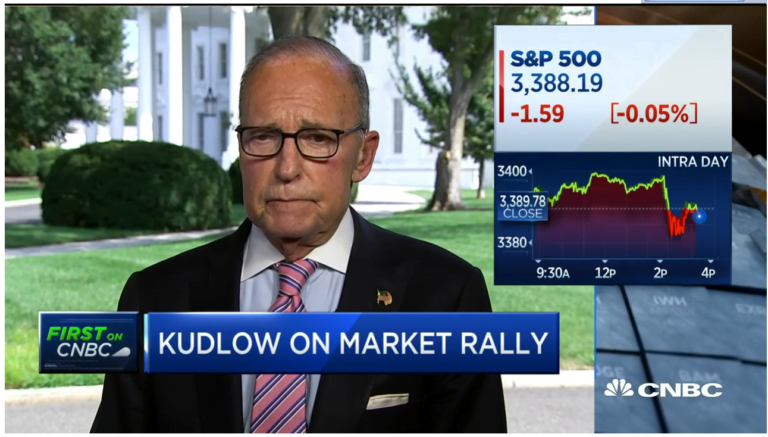 First on CNBC: CNBC Transcript: National Economic Council Director Larry Kudlow speaks with CNBC’s “Squawk on the Street” today, discussing that Trump intents to fight but there will be a peaceful transfer of power for the presidency.

CARL QUINTANILLA: Joining us first on CNBC this morning is the White House Director of the National Economic Council, Larry Kudlow. Larry, good to see you. Good morning.

LARRY KUDLOW: Thanks Carl, appreciate it.

QUINTANILLA: Can't wait to talk about the jobs number in the economy but I know you'll forgive me for asking, I know you've probably spoken to the President in recent hours. Can you just give us a sense of what he's saying about the count as it continues today?

QUINTANILLA: I hate to ask, we've known each other a long time Larry, I have to ask, is there a point at which you process the results yourself and make a decision about whether you would have to stick with the administration in the face of, I would, I don't know I’ll use the word defying the results as we see them at least?

KUDLOW: Carl, you know, I always take things a day at a time. That's the way I operate. We had a great jobs number this morning, 6.9% unemployment shows tremendous strength coming into the fourth quarter. The election count will go whatever way is going to go. For me, it's always a day at a time. I have been honored to work for President Donald Trump for these three years in my capacities economic advisor. It's been a great honor. It's been a terrific experience for me. So, you know, that's all I have to say on that, I'm glad the economy's coming back. There's still hardship out there, I get that. When you see 6.9% unemployment, down from whatever 14.5% six months ago, America's gone back to work. I think our policies have been very sound, and I'm glad folks are going back to work.

SARA EISEN: Larry it’s Sarah. The market responded pretty well to the jobs report. But, you know, since this is front and center I have to ask, do you believe that a peaceful transfer of power for the presidency in this country is necessary to keep the markets calm and stable?

KUDLOW: Well, I think there will be a peaceful transfer of power. And I think the markets have been remarkably calm and resilient and actually rather bullish these past six months, going back to what, the third week of March or so. So yeah, look, I think, you know, this is a great country, this is the greatest democracy in the world, and we abide by the rule of law, and so will this president. There's some things to clean up here and again it's not my area of expertise, I'll leave that discussions to the campaign, but yes, we will, we will continue peacefully as we always do. And I might add anybody from, from around the world offshore watching this, they should know that, that America is the greatest democracy and we abide by the rule of law.

DAVID FABER: Hey Larry, it’s David. Given I don't know how many more of these interviews we’ll have, of course one day we may be back in person with each other in a different, different venue. I want to ask about something that we've never talked about and a lot of people may not realize that you've been very involved in, which is 5G. And the rollout of that around the country, the national defense implications of it, you know Dish reported earnings this morning and I know you have a lot of insight here, they're trying to create a national network for 5G, they may bring in some other partners, what can you tell us there in terms of the role you've played and what you're seeing and what you expect?

KUDLOW: Well, the NEC team and myself have been the coordinator for 5G these past several years, and we've worked very hard, it is a high priority. I thank you for noticing all of that. It's a key part of the administration's policy. You know, we are determined to roll out 5G all across the country and, including the rural areas. There's a free market approach to it, I mean the FCC is auctioning off Spectrum at a record pace in recent years, and a lot of private sector players, we've been determined to use the free market in the private sector we think they know best under the FCC guidance and jurisdiction. And you're right, I think Dish is doing some, some great stuff. I spoke to their CEO from time to time. The big Telcos are doing good stuff, a lot of cable companies, including Comcast is doing some great stuff and we're making fabulous progress. People don't know how much we've done in terms of auctioning off auction, auctioning off Spectrum and moving into 5G architecture and infrastructure.

FABER: Yeah, well it's been an important component of it given, of course, the competition as well we're in with China. You know, finally on this do you think Dish is going to really mount a nationwide competitor in 5G? Do you believe that? Don't they need a lot more money potentially to do that?

KUDLOW: Well, I don't want to get into too much detail, but I will say yes. I think they are. Their CEO has told me that and of course, we welcome that. We want as many players and competitors in the private sector as possible. And you know, the technology just – I'm so glad you raised this, David – the technology of 5G has really changed a lot. A while back, Michael Dell said to me – we were talking about all this – he said the software is eating the hardware. And what you have is a tremendous movement towards what's called virtualization, which was more of a software-based, cloud-based system rather than the old dominant hardware machinery system. And so, the antenna – which you know just used to be some little goofy antenna – that thing now connects to the base much faster and much more closely with information spreading as a result of movement towards this so called virtualization. And we've sold this idea to our allies, like the United Kingdom, which has kicked out Huawei as has France and Germany and Italy, and on the other side in Asia, Australia, Japan, New Zealand, and so forth. So we're working through new technology advances as only America can do – that's the heart of our great economy – and 5G is going to be very prominent and I believe we are absolutely going to win the race.

EISEN: Larry, back to the economy for a moment. You mentioned the better jobs report. We still have a big hole to fill in this country. I think 10 million more jobs still that have been lost from March and April. If the President doesn't win re-election, which is the way that it's going right now, what will be his motivation and how likely would it that we get a stimulus package of some kind before the next administration comes in?

KUDLOW: Well, I won't comment on your first assertion. But I will say that we are in touch with Senator McConnell. Secretary Mnuchin spoke to him this morning. We're in touch with Senator McConnell. And I think that Senator McConnell wants to move on a so-called stimulus package. It will probably look a lot like some of the targeted areas that we have been discussing, particularly small business loans, the PPP program, things like unemployment insurance, reform of liability insurance, hospitals, schools – we think those are the key areas. And I think that Mr. McConnell's really determined to get something through. As you know, the Republicans are going to keep the majority in the Senate. Republicans picked up a lot of seats in the House, maybe as much as 12 – as 10 to a dozen new seats in the House – so it did very well on the President's coattails and the President's policies. So yes, there will be a lot of discussion about that coming up.

QUINTANILLA: And finally, Larry, David mentioned China briefly. There was a period about a year ago where the only thing we would want to talk to you about was phase one. I wonder how you would characterize as we close out this first year of it, and how China trade changes whether there is a transfer of power or not?

KUDLOW: I don't know the connection there, but I will say this. We have a lot of conflicts with China, a lot of disagreements with China. With respect to the China virus and democracy, the takedown of democracy and freedom in Hong Kong and human rights with the Uyghur military adventurism in the South China Sea. We have a lot of major disagreements. They will be held accountable. They have already been held accountable. Having said that, though, I will say we are fully engaged on the so-called phase one U.S.-China trade deal. I have spoken to my good friend Ambassador Bob Lightheizer many times in recent weeks. We've met with the President on this subject. And I can report, although phase one is not over, China is apparently abiding by a number of conditions and facets of that trade deal. In particular, although they may be a little bit behind with respect to obviously the virus interfering with the economies – the world economy – but they are buying commodities at a very strong record rate. Agriculture commodities in particular, but also manufacturing commodities and energy commodities. And we are seeing some structural reforms with respect to the key issue of intellectual property theft. And again, Ambassador Lightheizer who is the best in the business, an old friend of mine, we were Reagan cub scouts together, I'm proud of him, I helped work on his team. And it looks like phase one is going to be okay. I can't go further than that because we don't know. And I hope that China continues on this path so at least we have some – in our relations.

QUINTANILLA: I like the term Reagan cub scout, Larry. We're always grateful to you for coming on, on jobs Friday, especially in the midst of all of this. Thanks so much.

KUDLOW: Thank you, appreciate it, Carl.