By Jan Martínek of  CEC Partners

Africa Energy is listed in Stockholm (ticker AEC) and Canada (ticker:HPMCF), with a market capitalization of USD 260 million, no debt and net cash of approximately USD40 million.

In October 2020, Africa Energy and Total announced one of the top five hydrocarbon discoveries in the World this year.

Most junior oil exploration plays are a binary outcome play. They either find the hydrocarbons or not. Confirmation of one of the largest deposits in the World this year resolved the issue for Africa Energy. Based on the released information, the value of the deposit is multiple of the current share price of Africa Energy. Therefore the investment play is now only how much money you can make and how long will it take.

The company has a market capitalization of USD 260 million with significant cash balance and no debt. The company is listed in Stockholm and Toronto. Stockholm is the primary listing. 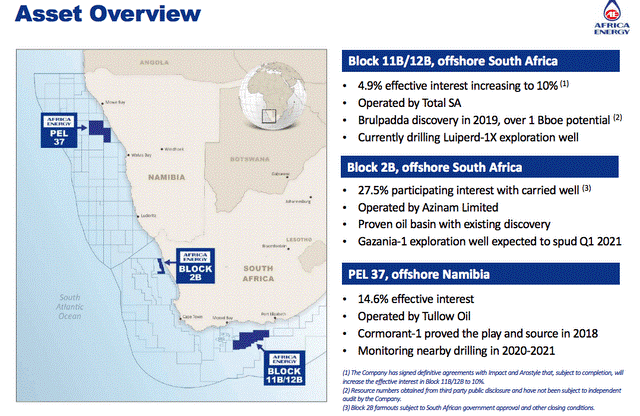 Africa Energy is not looking at any new opportunities; its goal is to de-risk the current fields, document the potential, sell the assets and distribute the proceeds to its shareholders.

While the other two blocks are quite valuable, for simplicity, I concentrate only on the main assets - block 11B/12B.

The asset is operated by French Total that has 45% interest. Africa Energy has 10% effective share following a recently announced series of transactions.

In February 2019 Total and Africa Energy discovered oil in a prospect called Brulpadda, that has an area of approximately 70 km2 within 11B/12B. Total estimated the Brulpadda discovery size at 1 billion barrels of oil equivalents.

The market does not appreciate there was oil too. It will be very relevant for the further evaluation of the Luiperd discovery. Brulpadda double discovery is described in the slide below. 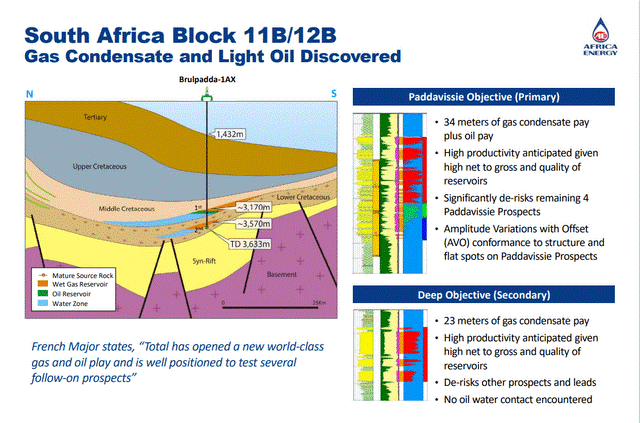 Africa Energy estimated that the Luiperd deposit is about 50% bigger than Brulpadda. If Brulpadda is 1 billion boe (barrel of oil equivalent), then Luiperd should be 1.5 billion boe. Therefore the two discovered deposits should be around 2.5 billion boe.

In Brulpadda Total drilled deeper after the gas condensate discovery and below that Total discovered an oil rim and the water contact at the main target. In Luiperd they did not drill deeper and did not encounter the water contact. 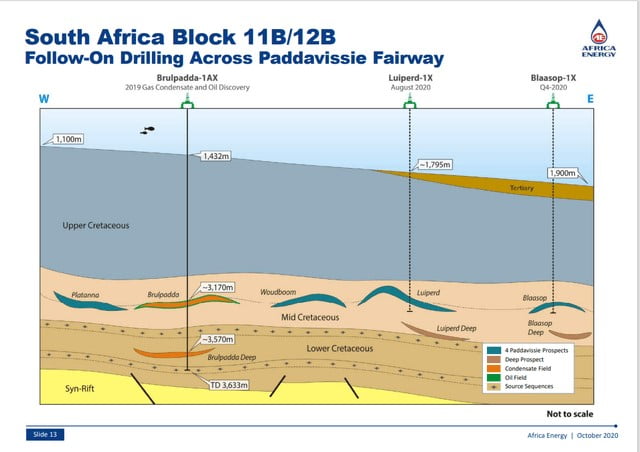 Jan Mayer, Africa Energy Vice President for exploration described that it was always the plan not to drill deeper because the well location was optimized for testing flow rates at the main targeet and was not ideal for assessing the resource potential of the secondary target.

Jan Mayer also said, that they have correlated the 3D geology in Luiperd and Brulpadda and based on this Africa Energy team has a high conviction that there could be an oil leg down-dip of the Luiperd location. That assumption is also visible from the slide above. This is not fully appreciated by the market. Market perception is that there is only high-quality gas condensate in Luperd and no oil.

What is also not appreciated by the market that there are 3 other remaining giant prospects with similar geology. Those prospects have been derisked significantly. Africa Energy's CEO Garrett Soden told Energy Voice. " ... This has also derisked the other prospects in the fairway, such as Blaasop, which now has a 95% chance of success." 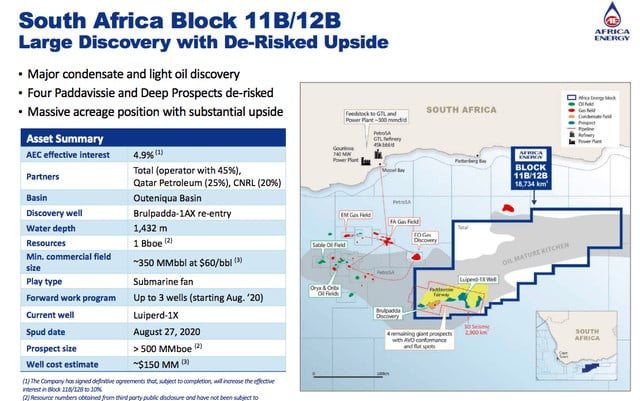 To the surprise of all the insiders, the Africa Energy sold off after the announcement. The share price decreased from SEK 3.5 to as low as SEK2.2 and then stabilized around SEK 2.6. I am using the Stockholm Stock Exchange prices as the stock has the most liquidity. In my view there were several reasons for the sell-off:

South Africa is very supportive of the oil and gas industries. It currently uses coal for 80% of its electricity generation and is interested in replacing it with more ESG friendly gas. South Africa has one of the lowest royalties rates and very good infrastructure.

The slide above shows that there is a gas to liquids plant on the shore of Mossel bay, some 175 km from Luiperd. The gas to liquids plant is running now on 30% capacity and running out of feedstock, as the currently supplying fields are at the end of their production life. Therefore there is a nearby customer for the gas paying an attractive rate of USD7/mcf.

There is also a Gorikwa power plant nearby that is using diesel and would like to switch to gas.

11B/12B should be sold within the next year or so

In my view, the sell-off made the opportunity much more attractive. I have increased our position in the sell-off significantly. The play has been derisked by the second discovery. It is not a binary play now - it is not whether Africa Energy would find hydrocarbons or not. They did, and the thesis is derisked. Africa Energy say they want to document the size of the deposit, sell it, and distribute the cash to its investors.

The next drilling will happen in 2021 or 2022 when 3-4 wells are expected to be drilled. Africa Energy has approximately USD40 million in cash, which would cover at least two wells. The company demonstrated that they could raise capital of that size, but still it is more likely that they would sell before the next drilling campaign.

The current market capitalization of Africa Energy is USD260 million. The company has USD 40 million in cash, so the current enterprise value is about USD220 million.

Africa Energy currently has 884 million shares. As stated above the company will be issuing new shares in exchange for doubling its stake in Block 11B/12B. After the transaction, the number of shares will increase to 1,457 million. Therefore the adjusted market capitalization would increase to USD430 million, and the adjusted enterprise value would be USD390 million.

The valuation of the deposit is relatively simple - you estimate the size of the deposit, and you take a net present value per boe that a buyer would use, and you get the value.

As described above the discovered deposits at Luiperd and Brulpadda have total deposit size estimated 2.5 billion of boe.

I spoke to two analysts from large Scandinavian brokerage houses. They both view that the such deposits at this stage would be valued between USD3-4 per boe. Both view this as conservative, good sale process could yield above USD5 per boe.

The table above illustrates the point if you take just the current Brulppada and Luipered estimated deposit size, you get a value more then two times larger than current Africa Energy enterprise value.

Even if you assume only 75% of the size of Brulppada and Luiperd, the value still come at USD560-750, which is still significantly above the implied diluted enterprise value of USD390 million.

If you assume some additional deposits in the nearby prospects, the value gets substantially larger at several multiples of implied diluted enterprise value.

Please note that all the calculations above are only for one of the three assets Africa Energy owns. The other prospects are described in detail in my previous article.

There are several catalysts for the story in the next four weeks:

It is unusual for a company of Africa Energy's size to be included in such a major resource. I spoke to the management several times. They are one of the most impressive guys I have met in the industry.

The investment play has been derisked by the discovery. It is now only about the timing and the size of value creation by the plot disposal.

The Lundin Group owns 50% of Africa Energy. Lundins have a great track record in achieving value creation. They have a good motivation to reinforce their reputation further through this transaction.