Investors have much to worry about today: a global pandemic, severe recession, and a polarizing election. Yet, we believe these events will soon recede into the rearview mirror of American history, while productivity and profits will continue their long-run upward trajectory. We also think that presidents have far less impact on the macroeconomy than is commonly believed, and that recovery from the pandemic and recession is likely to continue in fits and starts this coming year.

The greatest economic concern is less obvious, in our opinion. The return that an equity investor earns (or doesn’t) is determined by the price paid for future profits. Despite the pandemic, recession, and election, we have a good handle on future profits, as their long-run path is reasonably predictable. We also know prices, and therein lies the worry. In our view, the intelligent investor’s chief concern today should be owning stocks at inordinately high prices.

Fortunately, there is a unique solution to this concern. A major dislocation continues to build as high overall market and growth stock prices increasingly disconnect from depressed value stock prices. Speculatively high prices present the risk of loss and disappointing returns, while the “value depression” offers the opportunity to secure future profits at low prices. Rarely do these conditions prevail in such stark contrast at the same time. The chart below illustrates how the current value depression is on par with the epic value depression of the late 1990s. 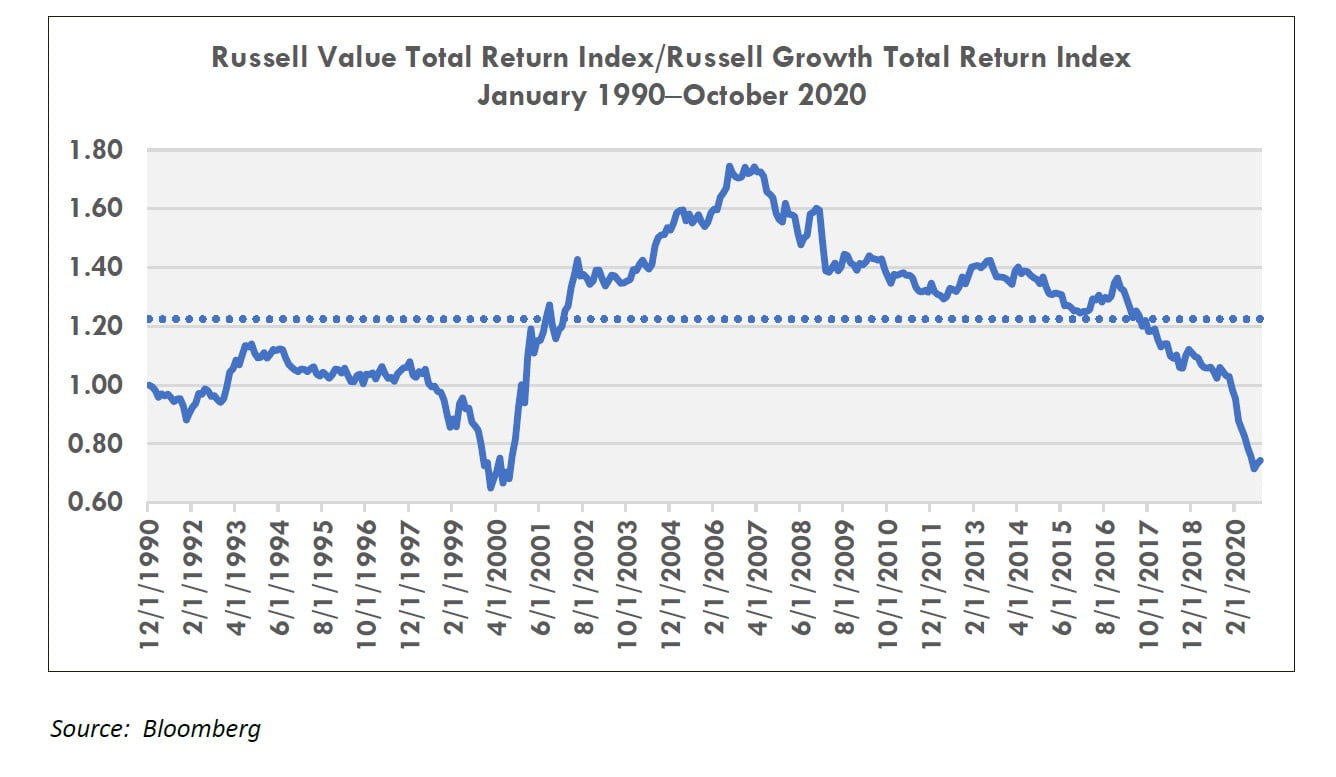 Generally, we prefer more accurate definitions of value (see our October 2019 commentary, “True Value”), but the divergence is so extreme today that these broad measures tell the story. While we do not know how much longer the value depression will last, value stocks are squarely in the bargain bin today when almost everything else is offered at precariously high prices.

Getting here has nevertheless been painful for value-oriented investors—at least on paper. Easy money has been made in many speculative stocks, while value remains depressed. The speculating show-off has much to crow about, whereas the disciplined tabulator of corporate profits looks out of touch. While we believe value will have its day again, perhaps the most important point to understand about the value depression is that no real economic ground has been lost getting to where we are today.

Our analysis shows that the profit value of our Equity Quality Return (EQR) portfolio companies has continued to accrue and that our valuation advantage has grown far more than the amount by which we have fallen behind. The figures below highlight these claims. 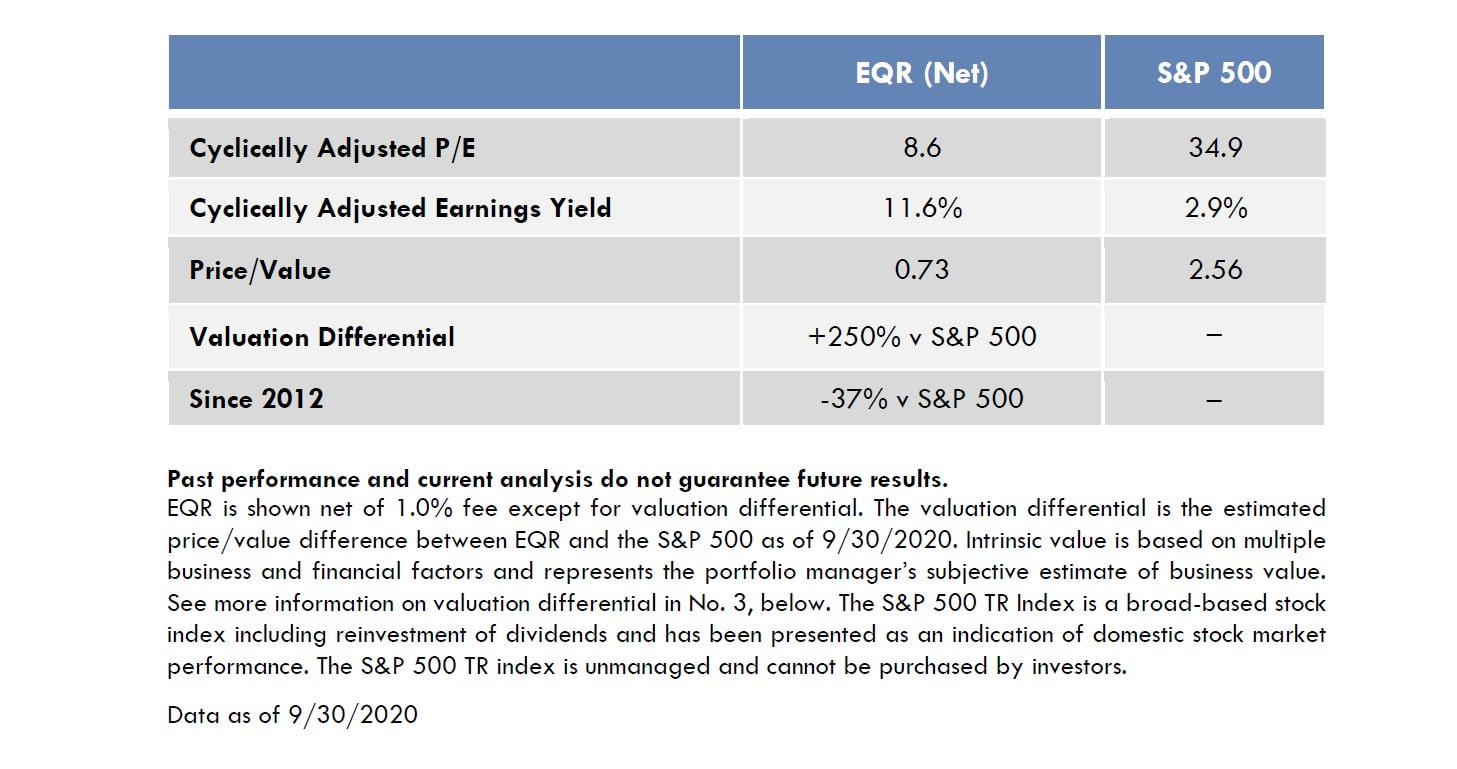 The remainder of this quarter’s commentary will be spent answering three thoughtful questions posed to us this past quarter: (1) What could we be missing? (2) How do such valuation disparities develop? and (3) How will our estimated valuation differential be realized?

1) What could we be missing?

The short answer is that we do not believe we are missing anything significant, but the ACR investment team is always seeking to unearth and understand all relevant economic issues. At the micro level, each company and industry that we evaluate is subjected to rigorous counter-argument. We think deeply about known risks as well as factors practically no one considers. Our analysis includes a review of disruptive technologies that could hurt or help, and we evaluate threats that could impact multiple holdings. The micro risks that we evaluate are far too many to enumerate in a commentary, but we remain confident that we have the company and industry level well covered.

At the macro level, we review general economic developments and themes that could result in different outcomes than we have typically seen or can forecast. The litany of “this time is different” arguments appear to us even weaker today than in 1999 when the economy was arguably overheating. The “fourth industrial revolution” thesis is, in our view, necessary for GDP per capita to return to its historical growth rate, rather than being a catalyst for supernormal growth. Productivity has trended lower in recent years, so we are counting on new technologies such as 5G, the internet of things, and artificial intelligence to directly benefit our companies and raise global living standards.

The most plausible argument for what we could be missing is that some great growth companies will turn out to be “values.” That is, their profit growth will be extraordinarily high for many years to come, thus justifying their high prices today. Certainly, this will be the case for certain companies. While we are skeptical that such a group can be easily identified in advance, our goal is not to beat out a small group of outliers. Indeed, more power to those who can.

ACR’s return goals are twofold: (1) generate a satisfactory absolute return and (2) beat the overall market in the long term as measured by the S&P 500. Regarding the second objective, for the S&P 500 to produce a return greater than 5% per year over the next decade, either corporate profits would have to grow faster than they ever have or price/earnings (P/E) ratios would have to hold steady or expand further. Count us as skeptics on both points.

First, the real growth rate of corporate profits closely tracks real GDP per capita, which as noted above, has been tracking lower in recent years but has never really jumped too much higher or lower than 2% in the long run. Second, the cyclically adjusted P/E is near all-time highs, and we believe is far more likely to decline than rise. The following charts illustrate these points. 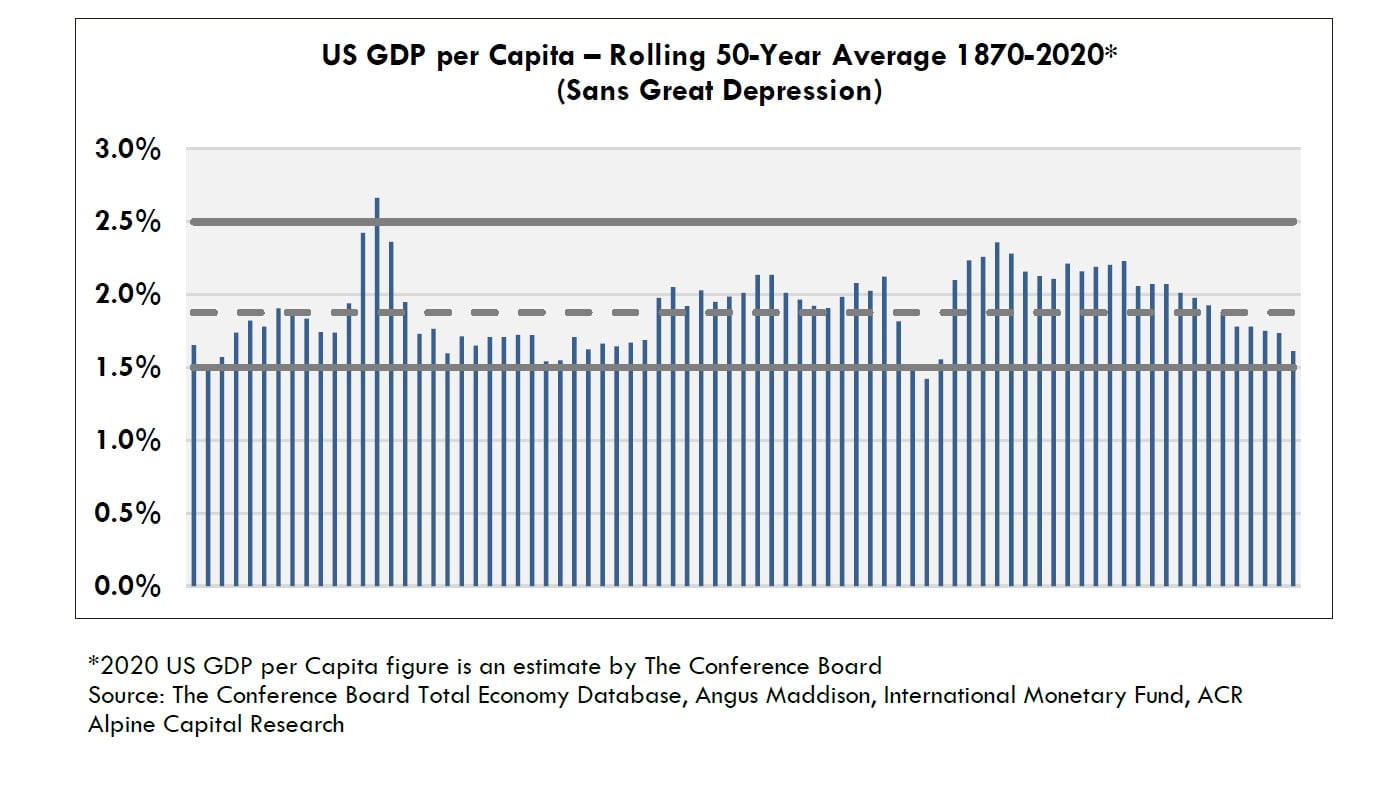 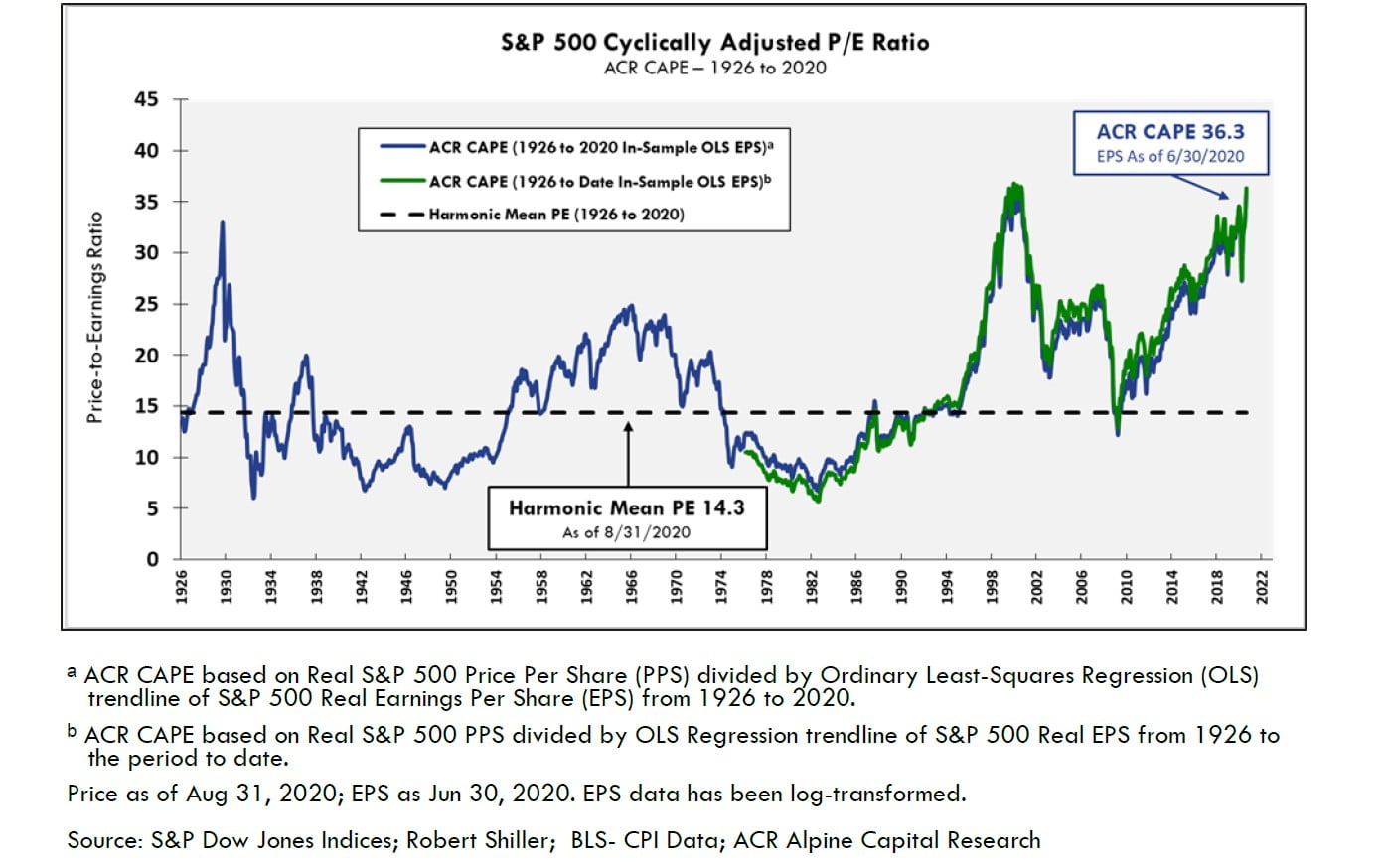 2) How do such valuation disparities develop?

We can only speculate about the reasons. To start, research has shown that value outperforms the market in the long term. A reason often cited for cheaper value stock outperformance is that investors are willing to overpay for inherently sexier growth stocks. Note that ACR does not invest in “value” for this reason. We are just as happy to own a rapidly growing company that is reinvesting its free cash flow as we are a company that is not growing but instead returning its free cash flow to us. Both growth and the return of cash to shareholders are valuable. The point is to properly assess the value of a company based on all relevant factors, including its risk, return-on-capital, growth prospects, and cash returns to shareholders.

Overenthusiasm, a fixture of financial markets dating as far back as the early 17th century tulip mania, is another reason that valuation disparities develop. Market participants can bid prices unreasonably high when new era economic theories are adopted out of miscalculation, ignorance, or greed. Another related reason for valuation disparities is the insidious “performance cycle.” A self-fulfilling phenomenon of outperformance develops as more money is added to “winning” fund managers and taken from “losing” fund managers. Then one day everyone realizes that the “winning” managers are sitting on an overpriced house of cards, and a new cycle begins.

Ultimately, no one can say precisely what drives markets to the kind of extremes we are seeing today. What we can safely say is that markets, much like a pendulum, tend to swing from one extreme to another, and that a keen awareness of fundamental value is the only reliable way to stay grounded during such times.

3) How will our estimated valuation differential be realized?

EQR cash returns are earned as dividends are paid and gains are realized. Realized gains can be further broken down into two components. The first is based on earnings-per-share growth from share retirements and business expansion. The second is a rise in market price relative to intrinsic value. The reason we are confident that the market will confirm our estimated intrinsic value is that we have modest expectations. The EQR cyclically adjusted P/E would need to rise from 8.6x to 11.7x—not a heroic assumption. Putting it all together, the EQR strategy’s estimated return is approximately 12.3% per year based on a 3.3% dividend yield, 6.0% earnings-per-share growth rate, and 3.0% increase in the P/E ratio over a 10-year horizon.

S&P 500 cash returns are earned according to the same mechanics. The difference is that we have much less confidence in the market price declining to meet our intrinsic value estimate. The die is still cast, however, based on the fundamentals. Our valuation model assumes a 1.4% sustainable dividend yield and a 4.3% earnings-per-share growth rate, implying a 5.7% annual return if the cyclically adjusted P/E holds. Given that the S&P 500 cyclically adjusted P/E is near all-time highs, we think it is more likely to contract, resulting in an S&P 500 return that is less than 5%. The more it contracts, the worse the return. An approximate 30% contraction over 10 years would result in an S&P 500 return of approximately 2% per year (1.4% dividend yield + 4.3% earnings-per-share growth – 3.7% P/E ratio contraction).

The ACR investment team takes the disclaimer seriously that current analysis and past performance do not guarantee future results. That is, we could always be wrong. However, the divergence in values is so great today that it is hard to imagine being directionally incorrect. Time will tell. In the meantime, we are especially grateful for the loyalty of our investors. ACR’s success depends upon partners like you who allow us to break away from the crowd, even if that means we are the tortoise in the race while the hare temporarily scampers ahead. Thus, we conclude, as always, with a hearty thank you for your continued trust.