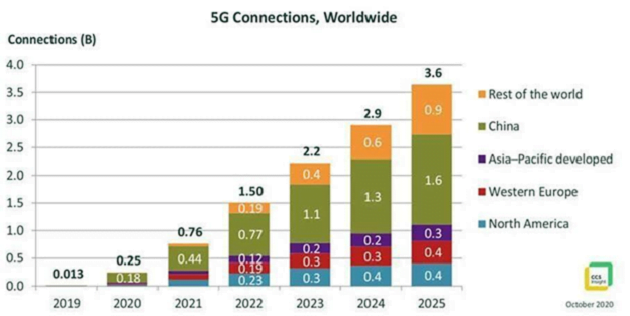 I’m seeing them pop up more and more. Maybe you are, too. Bold headlines telling you to “forget 5G.” And get ready for – you guessed it – 6G networks!

I want to be very clear: At this point, there is no such thing as "6G." It simply doesn’t exist. I suspect some marketer made up the term 6G to attract attention.

It’s working, I suppose. I’m seeing more and more ads for "6G networks." Yesterday, I got an email titled: “How to Make a Fortune on 6G.” These guys are shameless.

See, what they’re calling “6G” is just the deployment of actual 5G. We won’t see anything that remotely resembles 6G for 10 years at a bare minimum.

China says it plans to roll out 6G networks in 2030. Samsung, in their recent “white paper,” said they also expect mass commercialization to happen around 2030.

It doesn’t matter. It’s all just “noise,” a big distraction from the real opportunity available in 5G right now. Although it’s been hyped up for years, 5G isn’t even in its “first inning” yet.

You have to remember that this isn’t your run-of-the-mill upgrade. It’s nothing like the jump we saw from 3G to 4G.

All the exciting innovations you hear so much about today: self-driving cars, remote robotic surgery, and the Internet of Things can’t happen without 5G. Not just that, we’re talking about entirely new mobile networks, up to 100X faster than what we have today.

We’re going to need countless new antennas, fiber optic cables, satellites, and other network gear necessary to extend 5G signals beyond city centers. And the tiny filters that go in the phones themselves.

It’s going to take decades for a full 5G buildout. 5G is a massive undertaking. We essentially have to rewire the world. People don’t realize 4G is still growing—and that started more than 10 years ago!

The upgrade to 5G is one of the biggest events of our lifetimes. But right now, it’s still very early. In fact, we just got evidence that this boom truly is just beginning.

This is a huge moment for the entire mobile space. That’s because once Apple enters the game, it’s a sign that things are about to speed up in a big way.

When Apple introduced the first iPhone, for example, smartphones had been around for years. But they didn’t explode in popularity until Apple entered the market.

That’s likely to happen now with 5G smartphones. As one mobile industry insider said on a call I attended earlier this month: “Apple has always been late to any new generation. But once they come in it really shows that this is now real.”

See, the truth is only a small percentage of people actually own fully functional 5G phones.

Last year, many people were misled. They saw a little “5GE” icon in the upper corner of their phones. But 5GE isn’t really 5G.

Now, many people are wondering how the coronavirus plays into all of this.

With the world on lockdown, wireless operators are spending big bucks upgrading their networks to try to keep up with the surging traffic.

Truth is, they don’t have a choice. With more people online than ever right now, our wireless networks are being pushed to the brink.

Keep in mind, data usage across these networks was already doubling every year and a half before all this extra traffic. Now, they’ve reached their limits. In short, the world needs 5G more than ever before.

How to Profit off the 5G Boom

If you’re wondering how to take advantage of this boom, you’ll do fine owning the Defiance Next Gen Connectivity ETF (FIVG). It owns a basket of 5G companies.

But for the explosive, 500%+ gains, you want to own the tiny disruptors taking 5G to the “next level.” Remember what I said earlier: We still have a lot to do in The Great Upgrade. And lots of crucial components must be built. I’m talking antennas, satellites, the tiny filters that go in the phones themselves.

It’s causing quite a boom for the early-stage companies that’ve pounced on the opportunity to make these things. That’s where I’m most focused today.