Did Snap replace Facebook as the highest paying company now? 56% of tech professionals think so.

Last week, Snap's strong third-quarter earnings sent its stock price up as much as 37%, lifting its market capitalization as high as $57 billion.

Has Snap Replaced Facebook As The Highest Paying Company?

With this extra capital, a user on Blind,  an anonymous professional network, ran a poll asking, “Did Snap replace Facebook as the highest paying company now?”

The poll had 3,701 responses, with 254 professionals commenting on their own opinions, here are some key learnings: 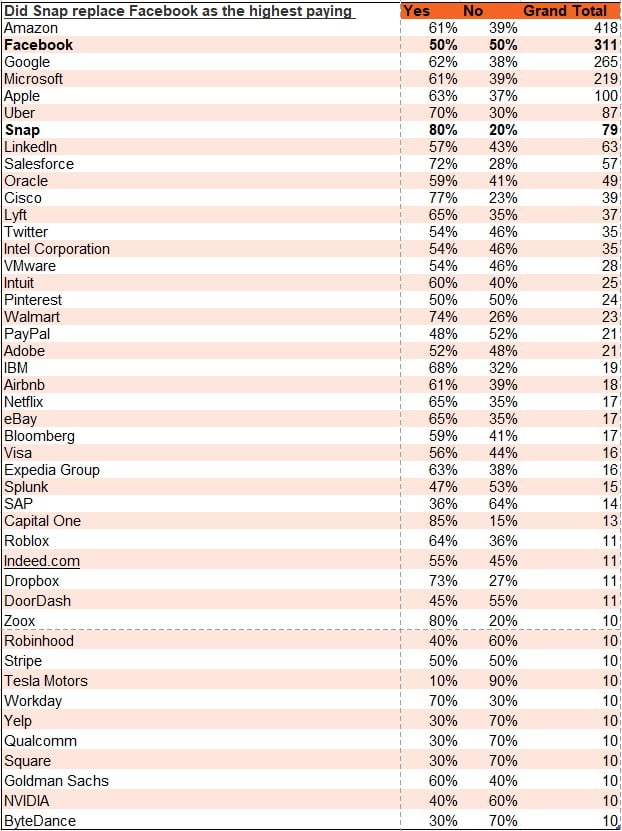 Clarification To The Poll

A user at Snap added some clarification to the poll, sharing: “It depends a lot, the new refresh strategy will be very good if the stock steadily rises but worse if the stock goes down. It also really depends where you are in the scale, if you are at the minimum for your level then you probably make more than you would at FB but if you are at the maximum for your level then you could probably get one level up at FB and make a bit more there.”

On Blind, total compensation is always a trending topic. Tech professionals always have their "TC" at front of mind. Will snap need to be added into the FAANG acronym?