ValueWalk
Home Business Gold Is Likely To Win This Election 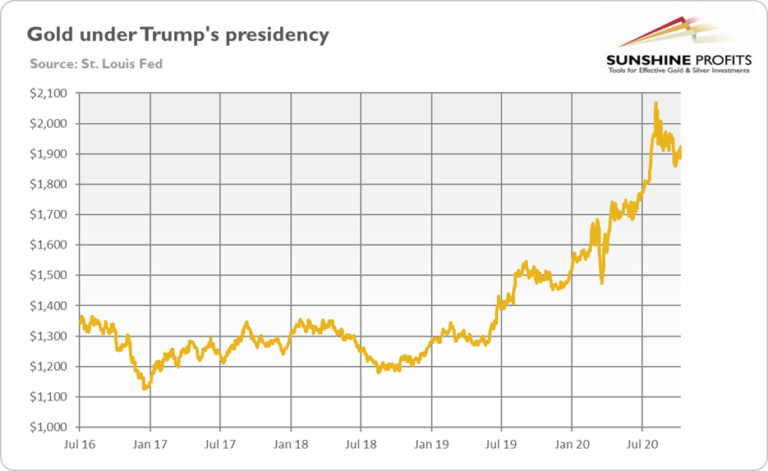 Trump and Biden debated for the second and last time in this campaign. So, who will win this election, and why gold is likely to be the biggest winner of them all?

President Donald Trump and Democratic challenger Joe Biden met for the second and the last debate before the elections. Thankfully, this time things were less chaotic and with far fewer interruptions and insults. Perhaps Trump has acknowledged that his aggressive behavior was a liability and decided to change his approach – especially since this was his final opportunity to alter the presidential campaign dynamics.

Biden Is In A Significant Lead

However, it might be too late now. According to both nation-wide and state-by-state polls, and market bets, Biden is still in a significant lead (as the chart below shows). Moreover, because of the postal voting, many votes are already locked in, as a record 47 million Americans have already cast their ballots. 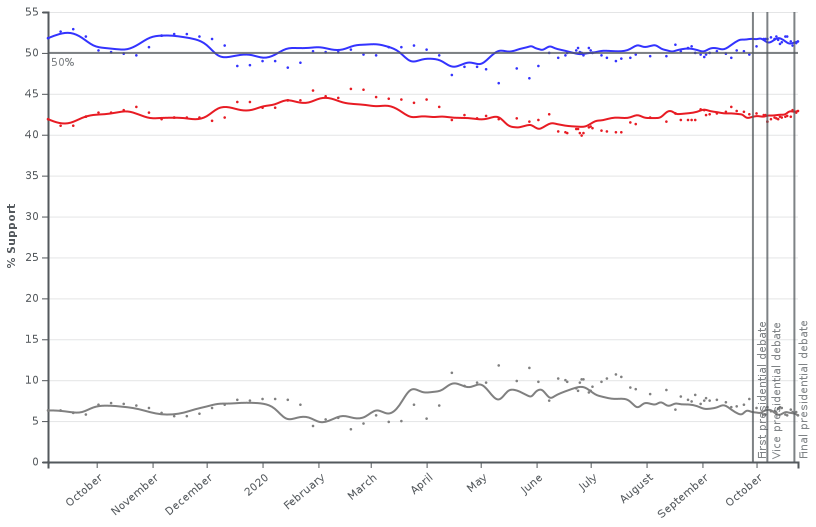 In addition to the above, the epidemiological situation does not help Trump at all. People believe that he dealt poorly with the epidemic , and now we even have the resurgence in the number of Covid-19 cases in the United States (and other countries as well), presented in the chart below. It is not only a resurgence, it is a new black record of the number of cases! 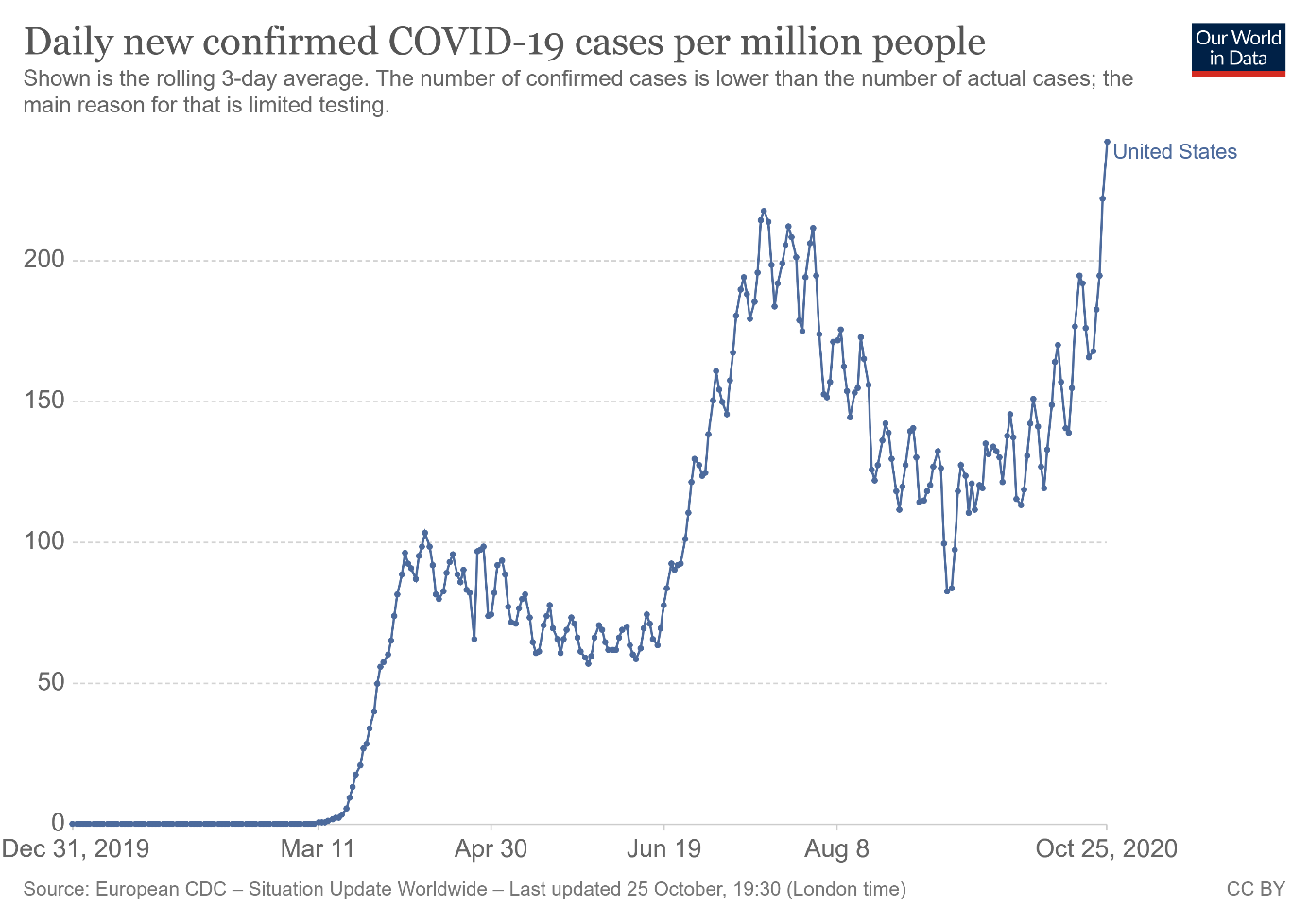 The pandemic is hitting even harder now than in the spring. This means that the economic recovery will remain fragile, which is bad news for Trump, but excellent for gold prices. Indeed, the latest Beige Book showed that most parts of the country's economic activity were "slight to modest". And the leading economic index rose just 0.7 percent in September, following the increases of 1.4 percent in August and 2 percent in July.

However, even though mainstream pollsters have corrected some of the mistakes they made in 2016, it’s safe to assume that Trump has better reelection chances than it is widely believed and reflected in the mainstream polls . As you might’ve noticed by now, Biden spurs less enthusiasm than Trump and even less enthusiasm than Clinton, for that matter. He is mainly an anti-Trump choice, so some of his voters may not show up on a ballot day.

The Election Results And The Implications For Gold

So, what does all the above mean for the gold market? Well, it depends on the election results. The best scenario for gold will be a Democratic sweep , as it would imply more chances of higher taxes, increased regulation, and big fiscal stimulus. Trump’s victory should be good for gold, as it would be a continuation of the trade wars, budget deficits and geopolitical uncertainty. After all, as the chart below indicates, gold saw about 50-percent gain during Trump’s presidency. 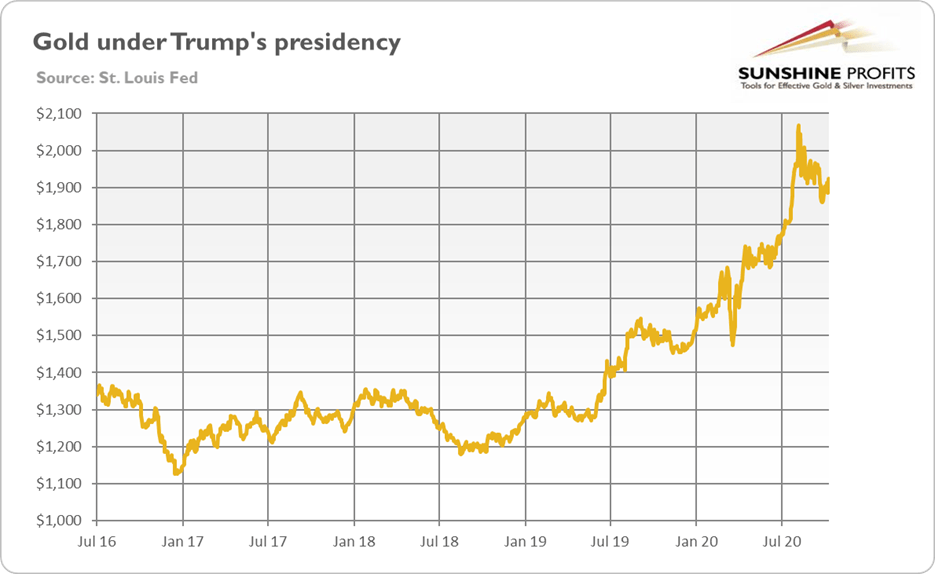 The worst scenario (but not necessarily significantly bad in absolute terms) could be Biden’s victory but with Republicans retaining Senate. In such a case, we would get more predictability in the White House and in the foreign policy, while Republicans would block the most disastrous ideas of a new president.

Another issue is that the election results will probably be contested. Some analysts claim that it would be bad for the gold prices, as contested outcomes would delay the fiscal stimulus. However, the results' conflicts should also drive political uncertainty and support the save-haven demand for gold .

Last but not least, I will reiterate what I said many times earlier. The presidential election’s relevance for gold prices may be overstated. After all, the gold’s fundamentals are still positive : the real interest rates remain in the negative territory, while the US dollar has recently weakened compared to the spring.

Moreover, the fiscal stimulus will take place, despite who wins the elections. The only difference is that Democrats are willing to spend more. The fresh government spending will increase the fiscal deficit , and public debt should be even more favorable for gold . Furthermore, the COVID-19 cases resurgence increases the chances for higher stimulus or even for additional packages after some time. And of course, the Fed will buy most of these newly issued Treasuries, leading to further quantitative easing and a larger Fed balance sheet , which should also support the gold prices.