Did you believe that the monetary policy of Ben Bernanke in a response to the Great Recession was extraordinary? Nah, Bernanke was an amateur compared to Jerome Powell. The latter quickly reintroduced ZIRP, implemented unlimited quantitative easing, and provided bailouts to Wall Street – and now he risks higher inflation as a result.

The Impact Of The New Monetary Regime On Gold Prices

In August 2020, Federal Reserve Chair Jerome Powell delivered his Jackson Hole speech, unveiling a new monetary framework in the process. He announced a flexible average inflation targeting strategy (FAIT). The new monetary regime implies that when the inflation undershoots its target in one period, the US central bank will try to push inflation above the target in the next period to compensate for the previous shortfalls. In other words, after periods of persistently low inflation, the Fed “will likely aim to achieve an inflation moderately above 2 percent for some time,” as said in the amended Statement on Longer-Run Goals and Monetary Policy Strategy.

In plain English, the Fed announced that it will accept an inflation that is somewhat higher. And that it will not continue its standard approach, in use at least since Paul Volcker, and it will not raise interest rates to curb climbing inflation.

But shouldn’t the central bank rather try to achieve the price stability and protect the society against high inflation? Of course it should. However, the recent years of low inflation persistently below the Fed’s target of 2 percent (here I mean low consumer price inflation, and asset price inflation that is significantly higher), which are presented in the chart below, raised doubts in the marketplace about whether the US central bank is able to generate higher inflation at all. 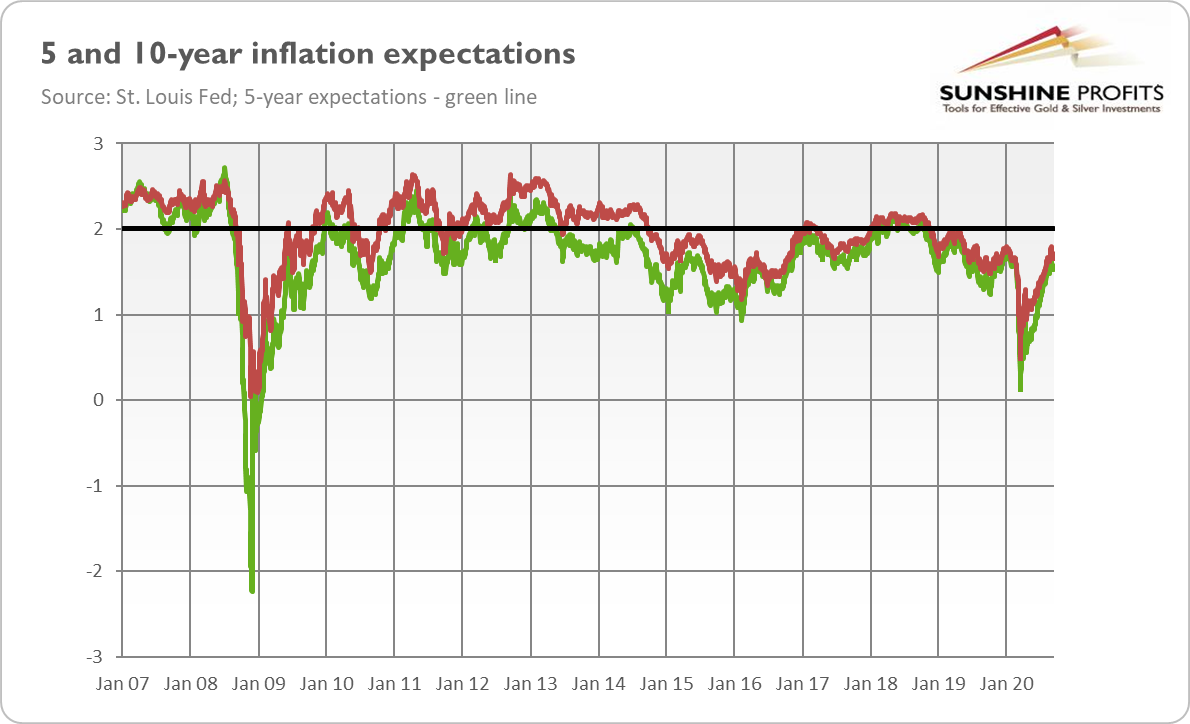 Hence, the Fed started to fear that it will lose control of inflation expectations which had recently declined (see the chart below). As Powell explained in his speech:

The persistent undershoot of inflation from our 2 percent longer-run objective is a cause for concern. Many find it counterintuitive that the Fed would want to push up inflation. After all, low and stable inflation is essential for a well-functioning economy. And we are certainly mindful that higher prices for essential items, such as food, gasoline, and shelter, add to the burdens faced by many families, especially those struggling with lost jobs and incomes. However, inflation that is persistently too low can pose serious risks to the economy. Inflation that runs below its desired level can lead to an unwelcome fall in longer-term inflation expectations, which, in turn, can pull actual inflation even lower, resulting in an adverse cycle of ever-lower inflation and inflation expectations.

This dynamic is a problem because expected inflation feeds directly into the general level of interest rates. Well-anchored inflation expectations are critical for giving the Fed the latitude to support employment when necessary without destabilizing inflation.18 But if inflation expectations fall below our 2 percent objective, interest rates would decline in tandem. In turn, we would have less scope to cut interest rates to boost employment during an economic downturn, further diminishing our capacity to stabilize the economy through cutting interest rates. We have seen this adverse dynamic play out in other major economies around the world and have learned that once it sets in, it can be very difficult to overcome. We want to do what we can to prevent such a dynamic from happening here.

Thus, the new framework could be viewed as a way to raise inflation expectations and regain control of them by the American central bank. 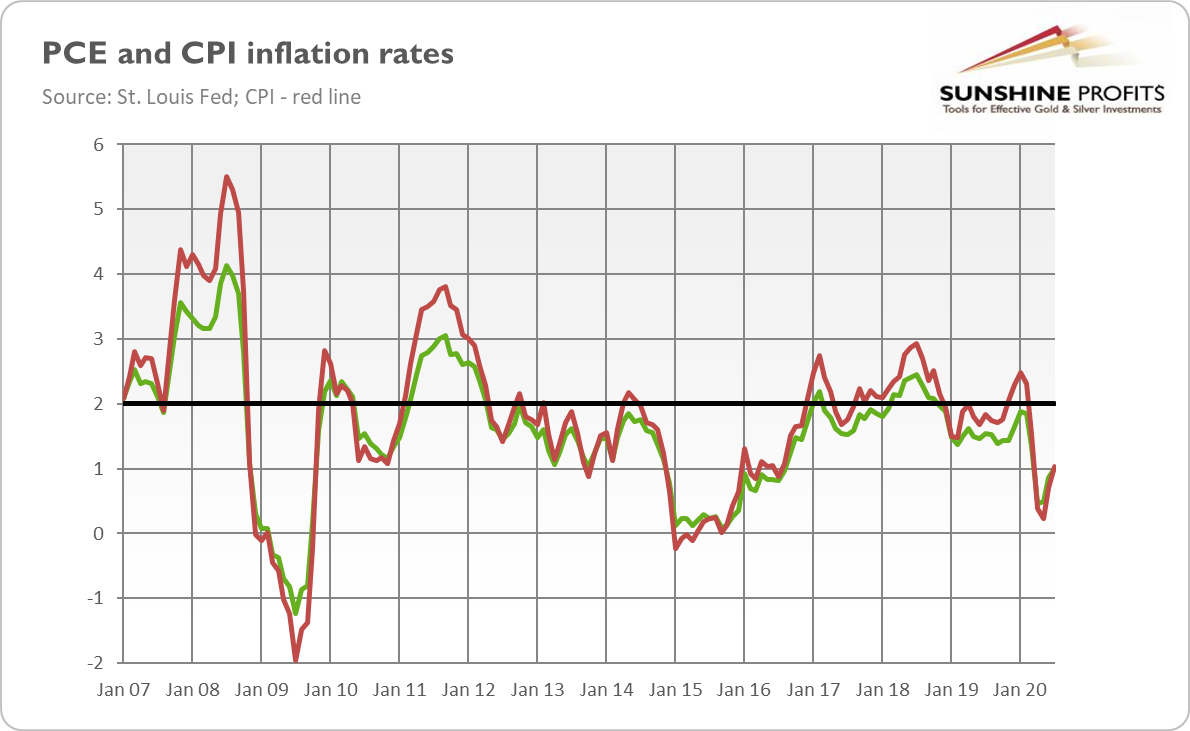 The Shift To The FAIT

The shift to the FAIT is a big move that should be positive in the long run for gold, which is considered an inflation hedge. But, perhaps even more important is the change within the employment side of the Fed’s mandate. Under the previous strategy, the maximum employment goal referred to the natural rate of unemployment that would be consistent with stable inflation in the long run. When the Fed expected the unemployment rate to fall below its estimate of the rate of unemployment that would not accelerate inflation, it raised the federal funds rate to prevent the increase in inflation. Under the new monetary regime, the Fed will not hike interest rates preemptively and unless there are visible signs of accelerating inflation. It means that the FOMC will prioritize employment and economic growth over inflation and will not impede recoveries unless the inflation target is severely threatened.

Hence, both major revisions – in the inflation and employment objectives – are fundamentally positive for the gold prices. It does not, however, mean that we will immediately see double-digit inflation. After all, the Fed could not generate inflation in line with the target, so why it should boost it above the target, even temporarily?

But the US central bank has given itself room to loosen its monetary policy for years. The interest rates will remain close to zero for longer than it would be appropriate under the old monetary regime, as the Fed will not try any longer raise interest rates to preempt inflation. In other words, the central bank is not likely to hike the federal funds rate until inflation is above 2 percent for some time – according to the recent Fed’s dot-plot, this is not going to happen before 2024. Hence, the Fed’s new framework implies lower real interest rates – is good news for the precious metals investors.

And the risk of inflation getting out of control should also support the gold prices. After all, as former Fed Chair William McChesney Martin Jr. said, “the effective time to act against inflationary pressures is when they are in the development stage—before they have become full-blown and the damage has been done”. It seems that the Fed has forgotten this truth. Well, those who cannot remember the past are condemned to repeat it. Although this statement has negative connotations, I believe that gold bulls would like to relive the 1970s!

Thank you for reading today’s free analysis. We hope you enjoyed it. If so, we would like to invite you to sign up for our free gold newsletter.  Once you sign up, you’ll also get a 7-day no-obligation trial of all our premium gold services, including our Gold & Silver Trading Alerts. Sign up today!