ValueWalk
Home Business Gold Asks Where Is The Inflation

The inflation remains low and below the Fed’s target. So, should gold bulls worry about it?

The Inflation Remains Low, What Does It Mean For Gold?

On an annual basis, the overall CPI increased 1.4 percent (seasonally adjusted), following a 1.3 percent increase in August. The core CPI rose 1.7 percent, much like in the month prior (or a bit less if we abstract from rounding). Therefore, as the chart below shows, the period of disinflation perhaps ended, but the inflation remains low. It seems that even though the inflation rate has reached the bottom in May or June, the outbreak of high inflation in the near future is unlikely. 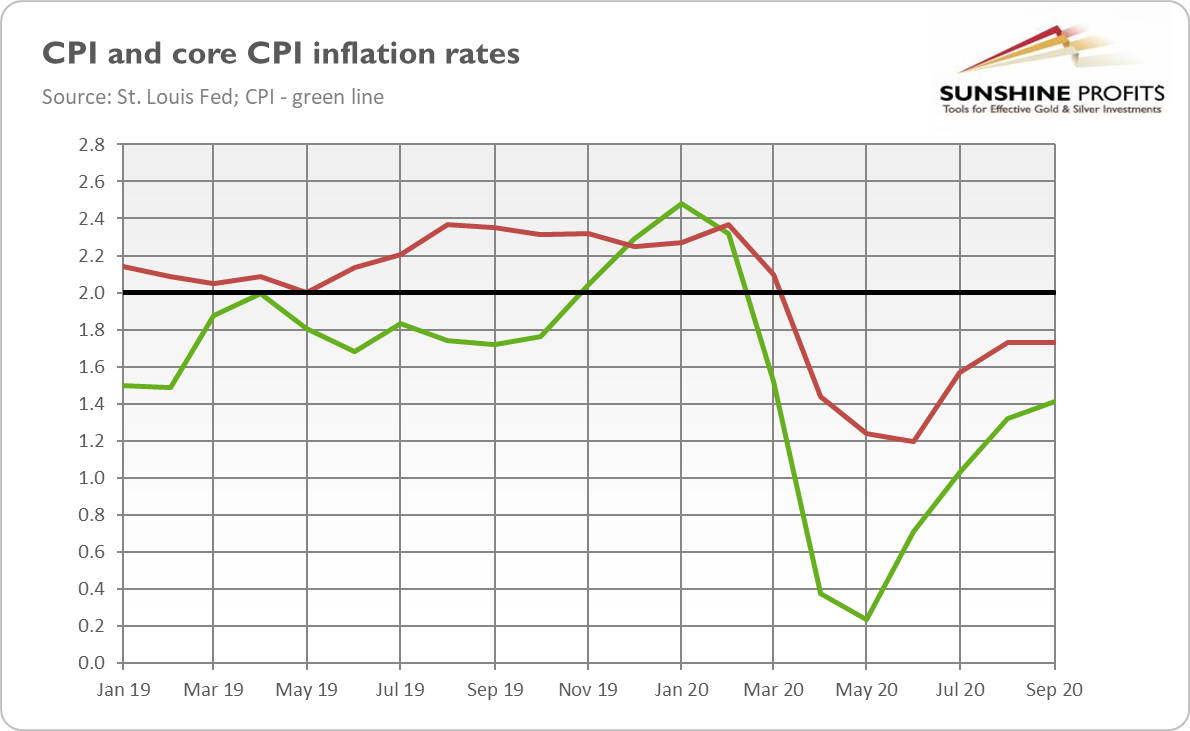 Indeed, the expectations from the inflation rebounded after a plunge during the coronavirus crisis. But, they have stabilized around the pre-pandemic level, at which market players don’t see an outbreak of inflation, as shown in the chart below. 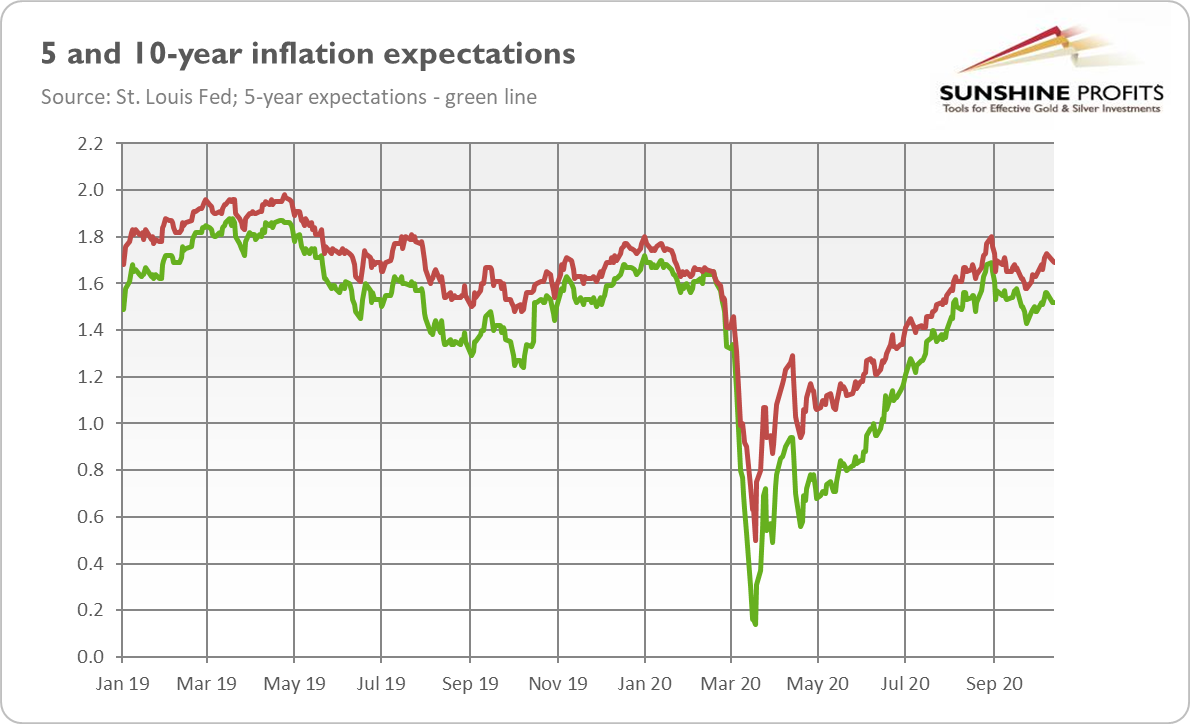 So, is Mr. Market right that the inflation will remain low, i.e., below the Fed’s target? Well, he might be. After all, the pandemic caused a profound economic shock, and the demand remains subdued. Now, with the new wave of Covid-19 infections and the slow economic recovery within the fourth quarter, inflation could remain tepid for quite some time.

However, it is also possible that both expectations and the inflation itself will be increased over the medium term. This is due to another boost in government spending monetized by the Fed , the delayed respond of prices to the earlier increase in the broad money supply (see the chart below) – there is always a lag here that can last from 6 to 18 months), and the declining confidence in both the government and the central bank. 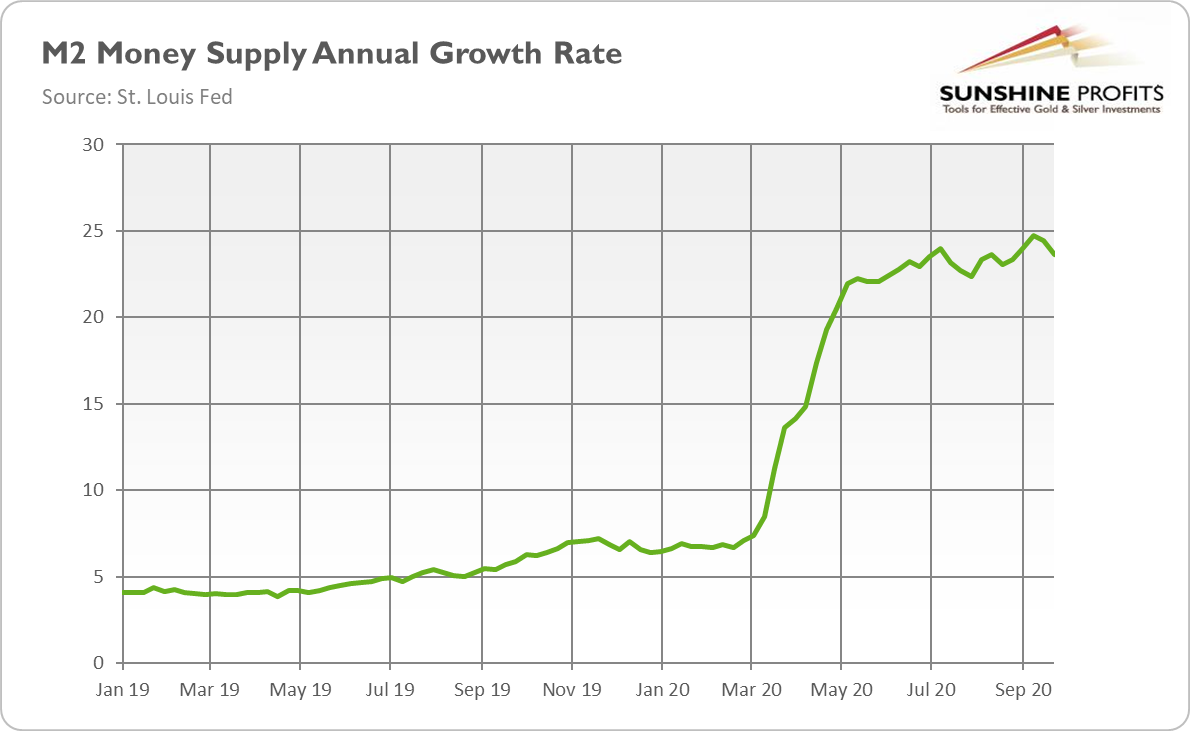 At some point it should be clear for everyone that the GDP recovery from the coronavirus crisis is driven by massive increases in debt, government spending and the central bank’s liquidity . Thus, although the few winners of the pandemic are clear, most of the small and medium sized businesses remains significantly away from 2019 levels. At some point people should realize that neither the easy monetary policy or fiscal deficits wouldn’t help the Main Street and small business fabric.

What does all of the above mean for the gold market? Well, as gold is by many perceived as an inflation hedge (not always correctly), it should welcome the inflation rate acceleration. However, the subdued inflation is not necessarily awfully bad for the yellow metal. This is because low inflation implies that the Fed will remain dovish and won’t hike the federal funds rate for years to come. Yes, the rising inflation could force the central bank to normalize its monetary policy – but under the new monetary regime (I wrote about it in a detail the last edition of the Gold Market Overview ), the Fed will not raise interest rates until the inflation stays above 2 percent for a certain period of time. As long the Fed remains behind the curve, gold should shine.

To put it differently, the lack of higher inflation is not surprising at all. After all, during economic crises and recessions , the uncertainty increase and people decide to spend less of their incomes than previously. So, the demand for money increases, which neutralizes part of the rise in the money supply. However, when the crisis finally ends, people will gradually withdraw their cash balances. Therefore, we could still see a higher inflation. But it will not happen now. Instead, it will occur when the situation normalizes, and the economic recovery sets in for good.

And, who knows, maybe this is a crazy idea, but isn’t is possible that the Fed expects such a scenario, and it is the reason why it changed its monetary regime to allow for higher inflation? In any case, investors should remember that although higher inflation is an upside risk for the gold that would support its prices, gold does not need – as the 2000s and 2020 bull market showed – double-digit inflation to shine.