ValueWalk
Home Business Who Do You Choose, Gold? Trump or Biden? 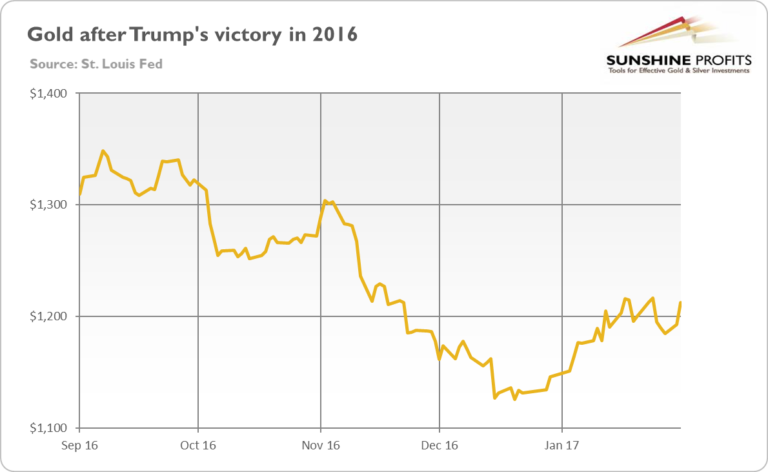 There are only a few days left until the elections. Who will become the next American president? Donald Trump or Joe Biden? Recent national polls indicate that the latter continues to maintain his lead over the incumbent running for reelection. Biden has an average polling lead of 10.0 percentage points over Trump, as the chart below shows. It is a massive advantage that puts Biden in a better position than any other challenger since 1936, when the first scientific polls were taken in a presidential race. 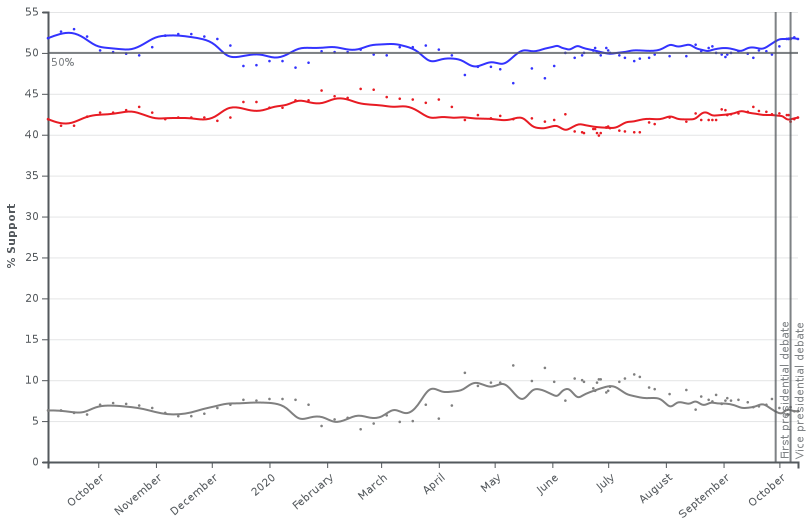 Trump Or Biden: Who Will Win The Elections?

The big difference stems from several factors, one of which is the fact that white seniors, a significant group of voters who helped Trump win in 2016, are now dissatisfied with the president’s erratic handling of the pandemic . People simply believe that Biden will deal better with the epidemic . He is also showing strength in the Midwest, which was Trump’s key to victory in 2016.

However, like the majority of people, I myself also mistrust the polls, especially the nation-wide ones. After all, the majority in the electoral college, and not the popular vote, ensures the presidency. But still, the recent state-by-state polling data indicates that people’s votes would translate into 279 votes for Biden in the electoral college, giving him the presidency (270 votes is needed to win). Most importantly, Biden leads even in the scenario of state polls far off as they were in 2016.

Moreover, polls are not the only thing that suggests Biden’s win. The predicting markets, where people put their money when their mouth are, such as PredictIt , also forecast Biden’s victory . According to the bets, he has about 66-67 percent chance of becoming the next POTUS.

Fair enough, Biden has more chances to become the next president, we got it. But what would his presidency mean for the economy and the gold market? Well, let’s start from the scenario of Trump’s victory. If he wins, we could expect the continuation of the same (however, given Trump’s erratic behavior, I wouldn’t be surprised to see some big shifts during the second presidency): trade war with China , additional tax cuts, more government spending, and further reduction in regulations. Trump’s victory would be somewhat positive for the economic growth, as it was in the last four years, but with some caveats. First, trade war is hurting the economy. Second, the fiscal deficits will go up further, as Trump does not care about them. Third, the President has no coherent strategy to cope with the pandemic (other than waiting for the vaccine), which could undermine the economic recovery.

The Impact On Gold Prices If Either Candidates Win 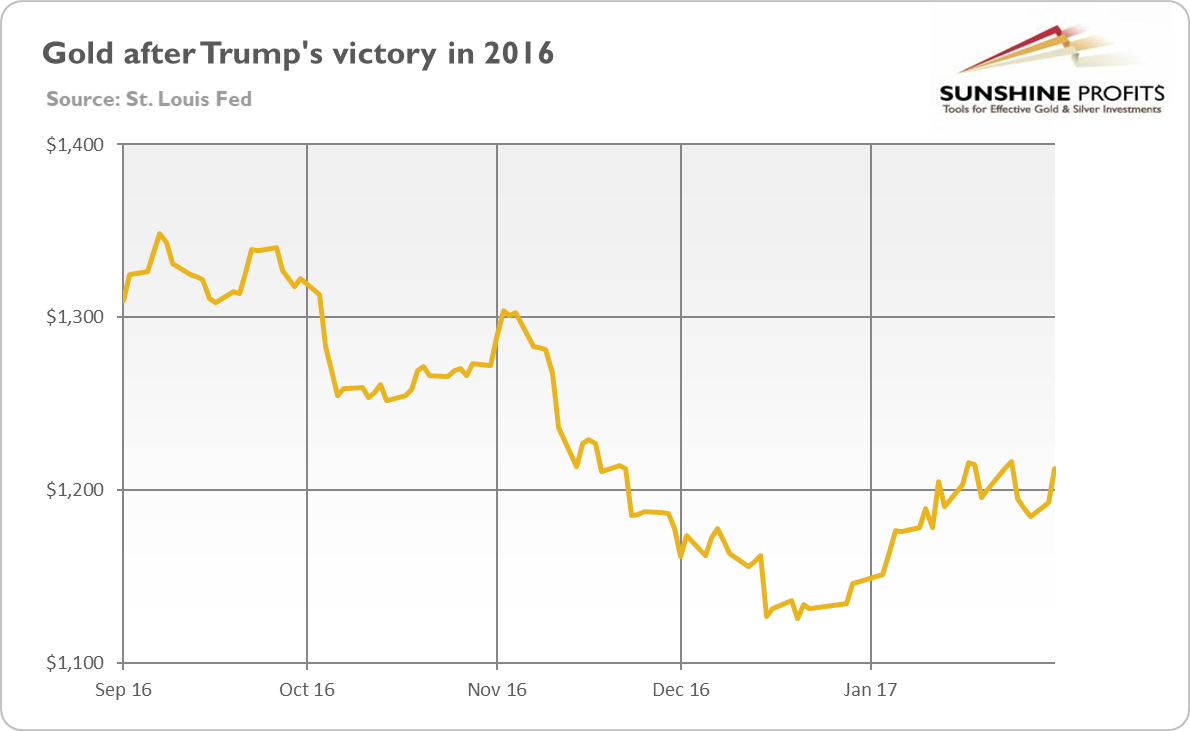 However, looking at things holistically, Trump’s presidency was pretty excellent for the gold prices – just take a look at the chart below! Thus, Trump’s victory would not be bad for the gold prices, especially in the current macroeconomic environment of negative real interest rates and ballooning public debt . As a matter of fact, Trump is actually a big supporter of low interest rates and high deficits! 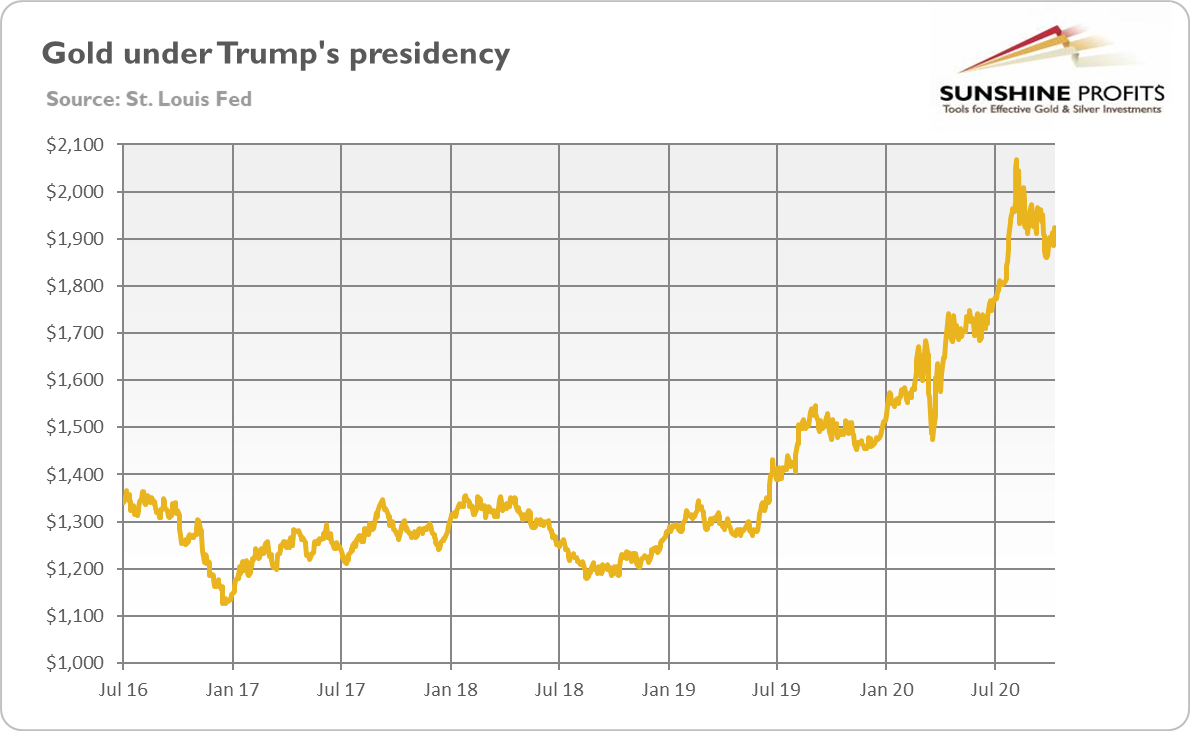 And what about impact of Biden’s victory on the economy and the gold market? Well, as president, Biden can bring more economic stimulus, an end of trade wars, higher taxes (however, likely not until the economy fully recovers) and eventually, more regulations. Given that Biden is likely to run even higher deficits than Trump, his triumph could be also quite good for the gold prices.

The scenario in which Bidens enters the White House, while the Democrats take control of the whole Congress could be particularly positive for the precious metals, as Republicans wouldn’t be able to block the worst economic proposals. Therefore, the markets could see Biden’s victory as more likely to generate higher inflation , which could boost some demand for gold as an inflation hedge .

More Fiscal Stimulus May Support The Demand For Gold

But, wait a moment, didn’t you just write that every scenario is good for gold? Yup. You see, regardless of who wins the election, I expect more fiscal stimulus, which could support the demand for gold as a safe-haven asset . And, no matter who wins, the Fed is likely to maintain its dovish monetary policy and zero interest rates .

In other words, the POTUS might be the most powerful man in the world, but even he does not have the power to control the economy. And the economy is still not out of the woods. It is true that the economy is recovering, but it still remains below the pre-epidemic level. Hence, both the monetary and fiscal policies – no matter whether Trump or Biden will live in the White House – will remain accommodative, which should support the yellow metal .