While listening to Rob Arnott on a recent Morningstar podcast, I became enamored with something that Arnott was emphatic about. He pointed out that the structural advantage of being a contrarian isn’t being smarter. Every winning purchase in the stock market comes as an opportunity cost to the seller. In aggregate, the non-passive portion of the market will look like the respective index. Arnott asked the question, “Who are you trading against?” In other words, who is on the other side of your transactions in the stock market?

It’s a very interesting question to ask all investors. With 60% of U.S. large cap markets indexed, as of a year ago, who is the seller to the buyer of the S&P 500 Index? For the value buyer, who sells them the names that are cheap? Arnott points out that 150 basis points to 200 basis points a year is the structural advantage to the contrarian investor. Once again, not because of intelligence. It is because the person on the other side of the transaction is doing something catastrophic: performance chasing.

Looking back at 2020 thus far, this is very easy to see. Names that have rallied the most this year are the biggest momentum winners. The performance chasers are loading up on these trades on a regular basis. The flip side of this today is economically sensitive names in the economy that were sold by the performance chasers in March. They rallied for a while and have been led in the last 90 days by names we own like the homebuilders NVR (NVR), Lennar (LEN) and D.R. Horton (DHI).

When you find any one agreeing with you, change your mind. When I can persuade the Board of my Insurance Company to buy a share, that, I am learning from experience, is the right moment for selling it. – John Maynard Keynes

John Maynard Keynes was one of the chief progenitors of the idea of independent thinking. Why? He knew from experience that performance chasing didn’t work. In 1929 Keynes was speculating on commodities in the belief that the economic future of America was just getting started. His theory was right. America became the global superpower that he had assumed. The blessing of being right caused Keynes’ personal finances to be destroyed as commodities were crushed by the crash of 1929. He learned that performance chasing didn’t work.

Thus, Keynes began his contrarian investing approach. The structural advantage he gained in his new approach was the person selling to him was running off to buy the next hot issue. Keynes’ quote above was in reference to his experience at National Mutual Assurance Society. For the board of that insurer, he knew he had to bet against what the consensus of the directors chose to do. It is only human to chase. It’s exciting. It makes us feel good initially, like joining a great social club. Once the honeymoon is over, the feeling can change.

Money manager Murray Stahl pointed out a wonderful fact pertaining to the current construct of the U.S. stock market in large capitalization securities. With 60% passive ownership in large cap one year ago, Stahl assumes this has grown to 65%. He also assumes this passive owner is a natural buyer of stock at this point in the cycle, so there are not sellers aggregated among 65% of big cap stocks. He assumes this because dogs chase cars and humans chase stocks.

Amazon highlights this better than most securities. Insiders own 15% of the stock. This means to find a seller you must look among the other 20% of stockholders. As Stahl points out, this other 20% represents a market cap the size of United Health Group. Remember, insiders are owners. They do occasionally sell, though not regularly.

This cap structure would point to a greater than 3-to-1 potential buyer (passive) versus potential seller (active managers) among the other 20% of owners of Amazon. This works in bull markets.  When the 65% owner becomes a seller, where will a buyer of size come from? On a day that Apple is passing the market cap of the entire Russell 2000, you have to really begin to wonder where the next buyer will come from for many of these large liquid stocks. As further evidence of the size of performance chasing, to the right is a chart showing the sheer magnitude of the top five stocks liquidity as a percentage of the S&P 500 compared to 2000 and 2010. 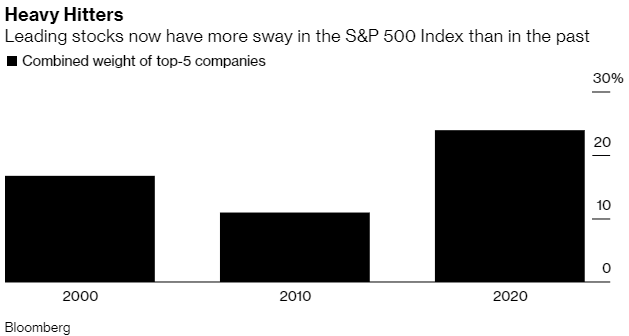 Robinhood investors have made the biggest splash in today’s speculation, but don’t forget the professionals. Yahoo Finance reported that hedge funds’ biggest positions for three years have been Facebook (FB), Amazon (AMZN), Microsoft (MSFT) and Google (GOOGL). The performance chasing and crowding in this arena is nothing different than the individuals. If you were getting paid 2 and 20, you’d have good incentive to chase too.

This isn’t a bad thing, however. It should be looked at as a great part of capitalism. To quote Keynes:

Speculators may do no harm as bubbles on a steady stream of enterprise. But the position is serious when enterprise becomes the bubble on a whirlpool of speculation. When the capital development of a country becomes a by-product of the activities of a casino, the job is likely to be ill-done.

Arnott is doing nothing more than echoing Keynes. Performance chasers (speculators) are just part of the “steady stream of enterprise.” There is nothing illegal about it. The question is whether it helps or hurts the person doing it.

As Goldman analysis, led by Ben Snider, noted recently, “The hedge fund long portfolio tilt away from Value ranks as the most extreme in our 18-year data history.” As Arnott pointed toward, investors should be using this to sell what the performance chasers want. This would be tech and other momentum stocks. In turn, investors should purchase what the speculators have no interest in. This list would include securities in financials, energy and certain consumer-oriented real estate assets.

For investors that disagree with Arnott, Keynes and those of us that agree with them, your criticism is welcome. It’s a normal part of capitalism as we said earlier. While we believe this is very black and white right now, some will argue for shades of gray. As an example, tech stocks are much more profitable than they were in 1999. It seems different to some. In our view, it makes the over-confidence and performance chasing seem more justified. This isn’t the only issue that seemed clear cut to some and obtuse to others. As Thorton L. O’Glove wrote in his great work Quality of Earnings, “Former US Supreme Court Associate Justice Potter Stewart once said that while he couldn’t define pornography with a great degree of precision, he knew it when we he saw it.” Just as this is a hard issue to define, the performance chasers are out there and we see you.

The information contained in this missive represents Smead Capital Management's opinions, and should not be construed as personalized or individualized investment advice and are subject to change. Past performance is no guarantee of future results. Cole Smead, CFA, President and Portfolio Manager, wrote this article. It should not be assumed that investing in any securities mentioned above will or will not be profitable. Portfolio composition is subject to change at any time and references to specific securities, industries and sectors in this letter are not recommendations to purchase or sell any particular security. Current and future portfolio holdings are subject to risk. In preparing this document, SCM has relied upon and assumed, without independent verification, the accuracy and completeness of all information available from public sources. A list of all recommendations made by Smead Capital Management within the past twelve-month period is available upon request.