1) As I've written many times before, I think short-sellers in general and activist short-sellers in particular are incredibly healthy for our markets – they uncover and expose fraud, hype, and overvaluation.

Their role is especially important today... With stocks soaring and easy-to-use trading platforms like Robinhood proliferating, more and more novice investors are being lured into risky stocks and types of investing, like trading options.

2) One of the best-known activist short-sellers is Nate Anderson of Hindenburg Research. I've met him and can attest that he does great work and has an excellent track record.

Yesterday, he published a lengthy and damning report on electric-truck maker Nikola (NKLA), Nikola: How to Parlay An Ocean of Lies Into a Partnership With the Largest Auto OEM in America. Here are the first five bullet points:

Adding to Hindenburg's research, someone who goes by "Nikola Insider" published this thread on Twitter this morning. It starts: 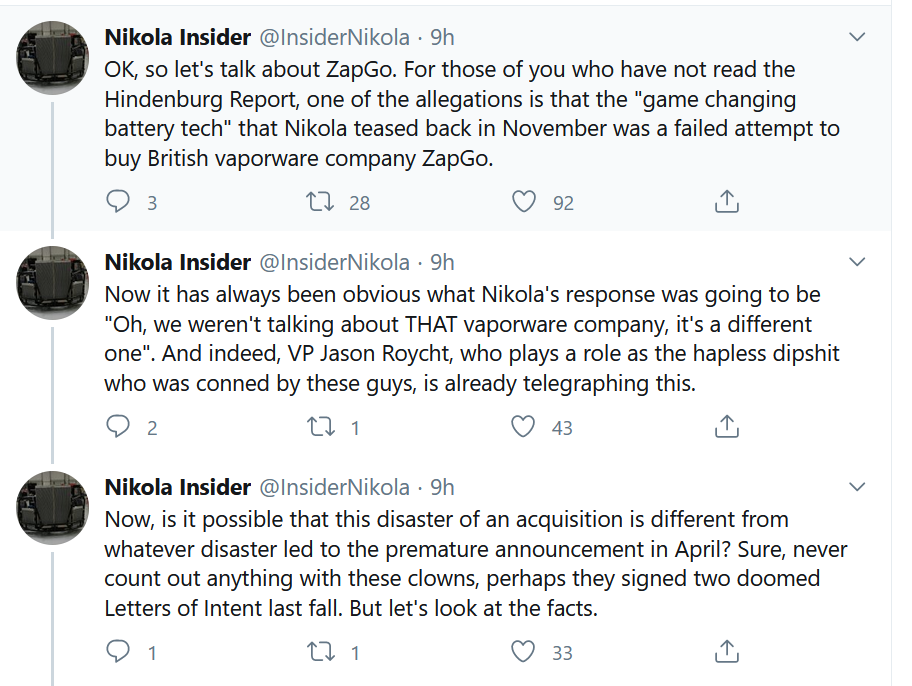 When reports like this come out, it's important to not only carefully and independently evaluate the facts and arguments in them, but also watch the company's response.

If the CEO calmly and factually responds to the short-seller – even calling him "a great investor and a wonderful human being" – as Netflix (NFLX) CEO Reed Hastings did shortly after I published an essay in December 2010 explaining "Why We're Short Netflix," then anyone short the stock should worry!

If, on the other hand, the company attacks the short-seller, threatens to sue, goes crying to the U.S. Securities and Exchange Commission ("SEC"), and promises a detailed response – but then fails to provide one – then anyone long the stock should worry!

Guess which approach Nikola CEO Trevor Milton has taken... Shortly after the report was released, just before the market opened yesterday, he tweeted: 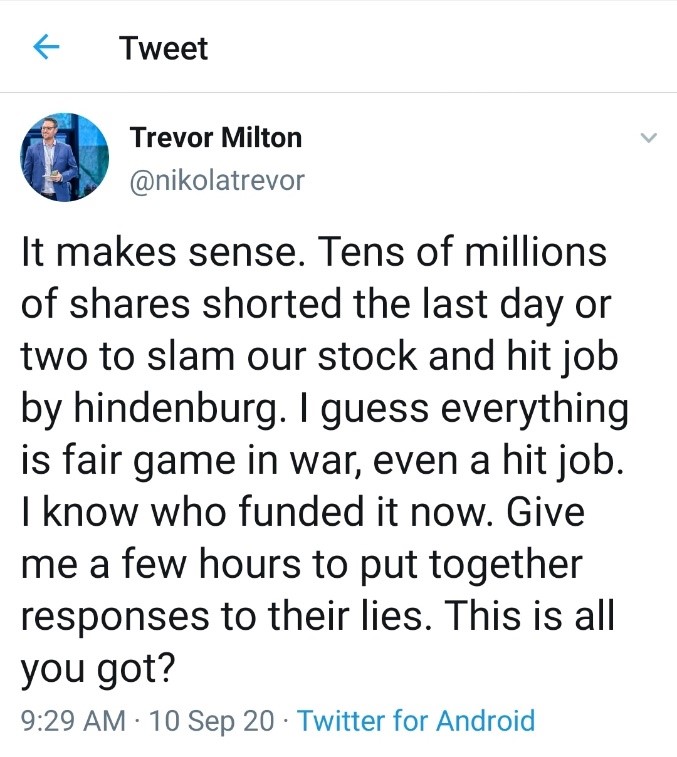 Investors waited all day for Milton's promised "response to their lies" – and when one wasn't forthcoming, the stock steadily sank, closing down 11%. 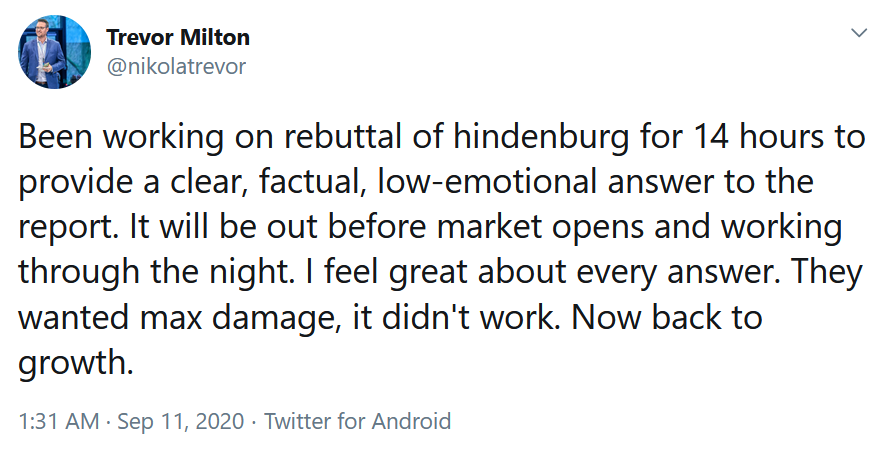 Then in a pair of tweets at 9:01 this morning, Milton backtracked, saying that "on advice of counsel however I won't comment further now" and the company won't have a response to the Hindenburg report until "the SEC finishes their work": 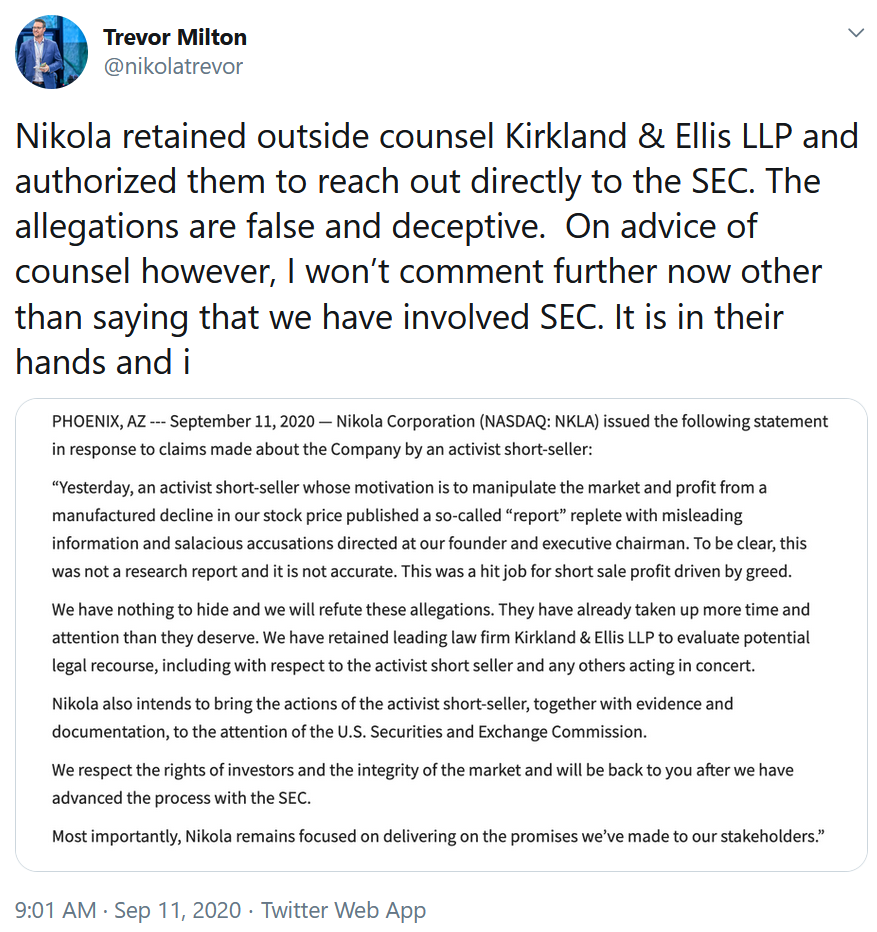 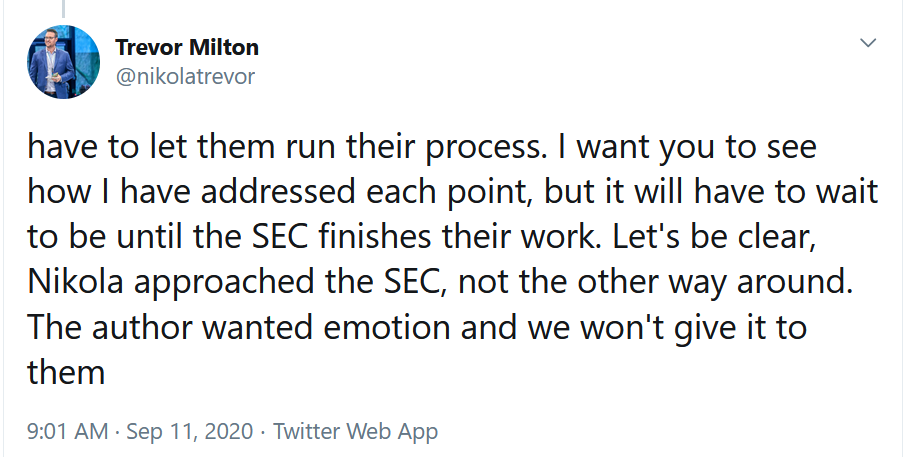 Yesterday, an activist short-seller whose motivation is to manipulate the market and profit from a manufactured decline in our stock price published a so-called "report" replete with misleading information and salacious accusations directed at our founder and executive chairman. To be clear, this was not a research report and it is not accurate. This was a hit job for short sale profit driven by greed.

We have nothing to hide and we will refute these allegations. They have already taken up more time and attention than they deserve. We have retained leading law firm Kirkland & Ellis LLP to evaluate potential legal recourse, including with respect to the activist short seller and any others acting in concert.

Nikola also intends to bring the actions of the activist short-seller, together with evidence and documentation, to the attention of the U.S. Securities and Exchange Commission.

We respect the rights of investors and the integrity of the market and will be back to you after we have advanced the process with the SEC.

Most importantly, Nikola remains focused on delivering on the promises we've made to our stakeholders.

No wonder the stock is down big again today...

My friend and activist short-seller Gabriel Grego just tweeted this: 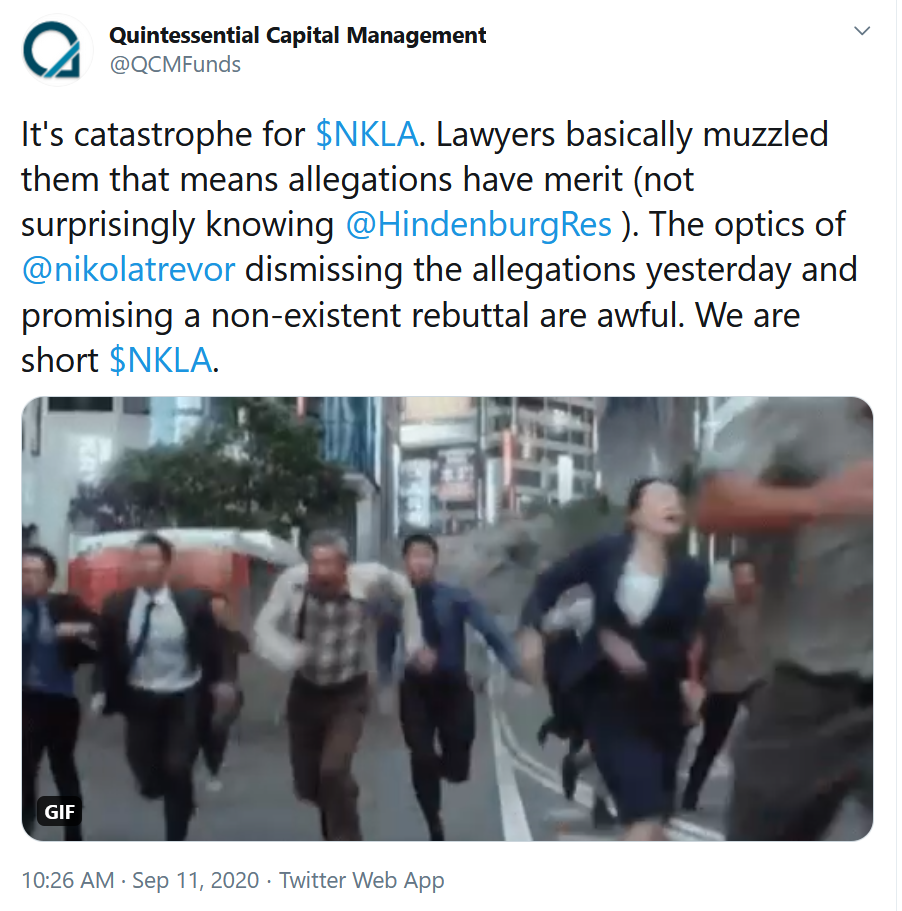 And here's what one of my friends e-mailed me this morning:

Imagine the conversation inside Kirkland & Ellis right now: "How do we verify that Nikola's rebuttal will be accurate? Will we look like idiots if Trevor lies to us, and we have effectively underwritten his response? Will GM's lawyers laugh at us, or just sue us?"

They worked all night at a response. They said it was coming yesterday afternoon, then yesterday evening, then this morning. And then this response, which basically admits that their rebuttal is so weak that they need a law firm to underwrite it. Very weak sauce.

My take: I think Nate, Gabriel, and my other friend are right. Nikola is toast.