Crash Protection Kicks In For Tesla

Since then, shares of Tesla are down more than 17%. 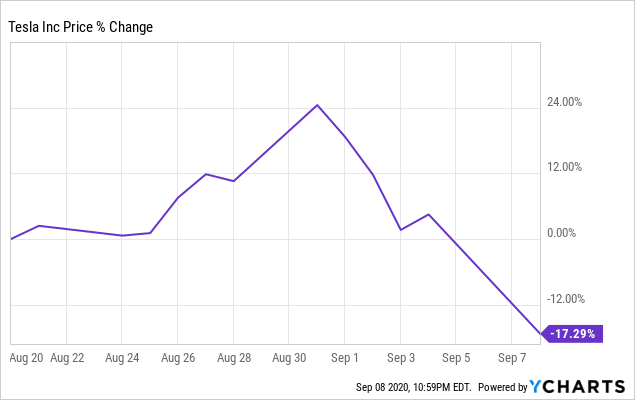 Let's look at how the hedge ameliorated that slide and briefly discuss courses of action for hedged Tesla Inc longs now.

On August 20th, this was the optimal collar to protect against a >20% drop in Tesla by February 19th, 2021, while not capping your possible upside at less than 24% by then. 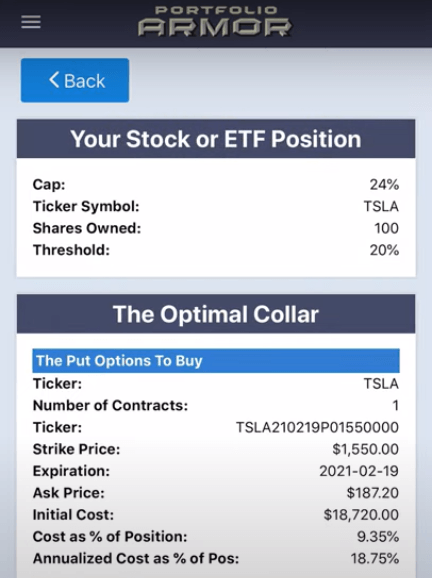 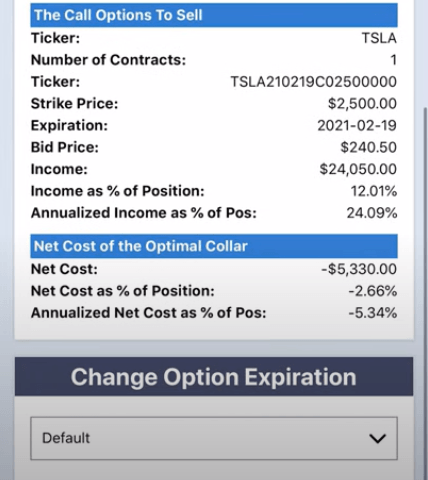 In this case, the net cost of the hedge was negative, meaning you would have collected a $5,330 net credit. That assumes, to be conservative, that you bought the puts and sold the calls at the worst ends of their respective spreads.

How That Optimal Collar Hedge Has Reacted

Recall that Tesla had a 5-for-1 split at the beginning of September. So if you hedged with the collar above, your one contract of $1,550 Tesla puts expiring in February would have converted to five contracts with a $310 strike, and your one contract of $2,500 strike short calls at the same expiration would have converted to five $500 strike calls. With that in mind, here's an updated quote on the put leg of the collar.

And here's an updated quote on the call leg:

Although Tesla Inc had dropped by about 17.29% from August 20th to September 8th and the hedge was designed to protect against a >20% drop, the optimal collar hedged position was down 8.26%. The time value of the put options gave a bit more protection than promised since the hedge was structured to protect based on intrinsic value alone.

That's up to you, and it will depend in part about your view of Tesla's prospects from here (my guess is Tesla will be trading at a higher price a year from now). The nice thing about being hedged, though, is that it gives you options (no pun intended). You don't have to worry so much about how much further Tesla might drop because your downside is strictly limited. So you can exit now, for a smaller loss; you can buy-to-close the call leg of your collar to remove your upside cap if you're bullish; and if you're even more bullish, you can sell your appreciated puts and buy more Tesla shares. In any case, you have breathing space to let the dust settle and decide on your best course of action, without the anxiety of an unhedged investor.