ValueWalk
Home Info-Graphs Where in the world is the FinTech revolution taking place? 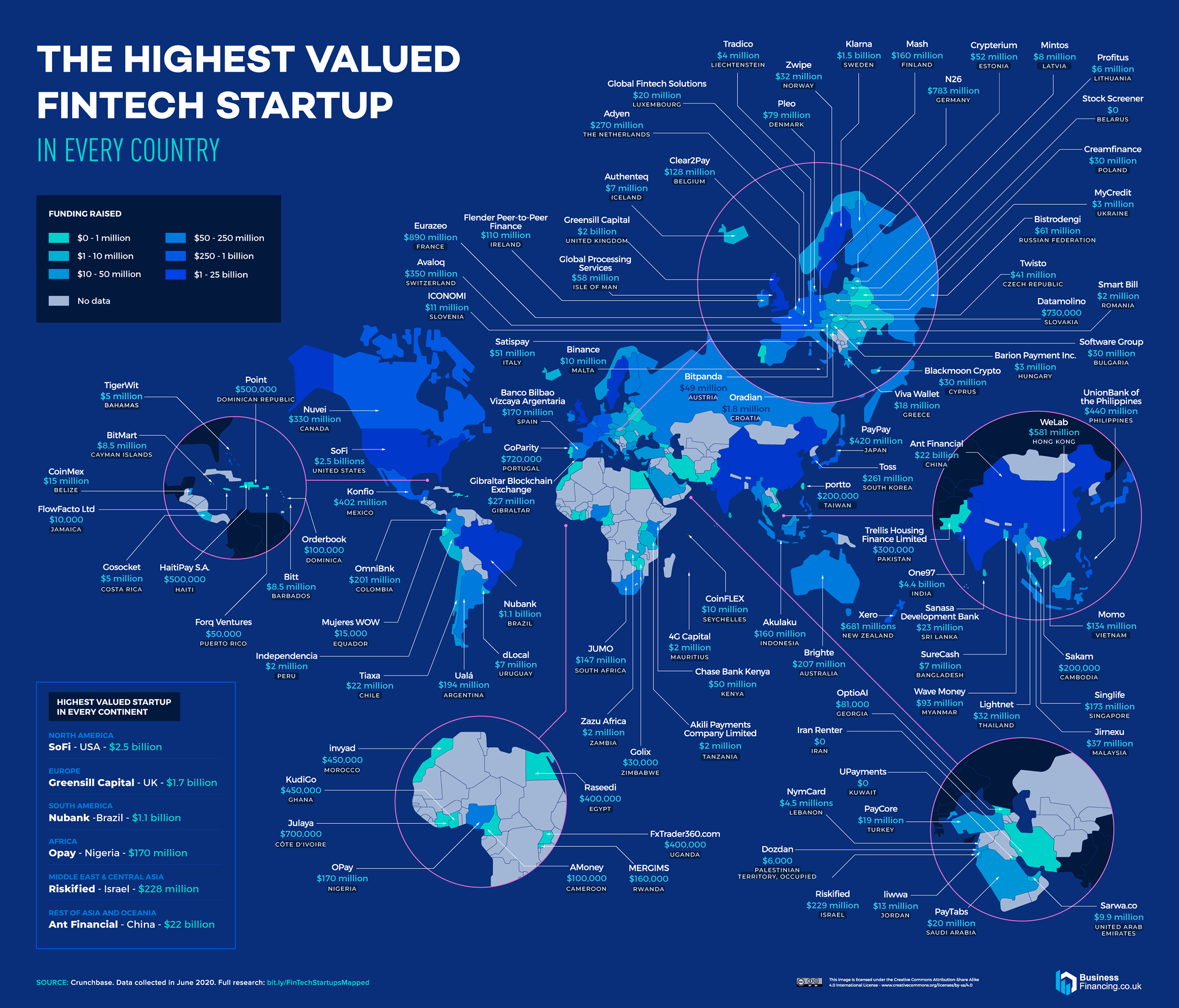 Even if you’re not into knowing about the latest news from the start-up world and have no real interest in finance, when the two come together in the form of FinTech, it’s something that has the power to change your life even without you being aware of how it came about.

If you pay for something using your mobile phone, contribute to a crowdfunding initiative or save money on your car insurance by having a black box recorder, that’s all happened because of a FinTech start-up somewhere. These companies are changing the way the world works but whereabouts in the world could you find them?

The Country With The Most FinTech Start-Ups

A new study has looked at where around the world these companies are based and perhaps the least surprising finding is that the country with the most FinTech start-ups is the United States of America. Home to Silicon Valley and many of the technological innovators that have transformed the way we live, do business and entertain ourselves, from Apple to Google, to PayPal and Uber.

There are 1,491 FinTech start-ups across America and between them they have raised an incredible $59 billion in funding to help them grow. The kings of the FinTech market in the US are loans company SoFi (Social Finance Inc) which has raised $3 billion on its own, which is more than the combined fundraising achievements of many of the countries on the list.

Interestingly, the ranking of countries with the largest numbers of FinTech companies doesn’t necessarily line up with that of the most investment raised, with countries like Sweden, France, and Hong Kong all having over $2 billion invested there despite having fewer than 100 startups in each.

The next biggest country for FinTech start-ups is the UK with 482 companies, which may be a fraction of the States but still makes it the biggest in Europe, with an impressive $19 billion of funding raised there. Greensill Capital is the UK’s FinTech giant with $2 billion worth of funding raised for its model of business lending.

China meanwhile may have only 166 start-ups compared to the UK’s 482, but they have certainly more than pulled their weight when it comes to raising funding, putting China not far behind the USA on $42 billion. More than half of this comes from Ant Financial, the world’s most highly-valued FinTech company and most valuable start-up, which is largely well-known for its AliPay service, the world's largest mobile and online payments platform.

Clearly China is a country to keep an eye on for FinTech developments, but there’s companies based in almost every country in the world that are finding innovative new ways to keep the money flowing. In South America the biggest company is Brazil’s Nubank, a neobank that was listed as one of Fast Company’s most innovative companies in the world for 2019 thanks to its app-controlled credit card.

Meanwhile, in Africa, Nigeria’s OPay is the biggest FinTech company on the continent, valued at $170 million. However, it has been having problems recently, with the impact of Covid-19 meaning that its ambitions to offer a huge range of services through its app - including ride hailing, logistics, food delivery and others - have been officially put on hold while it refocuses its model on finance.

Expansion In The Startup World

This demonstrates that there’s always an element of risk involved in the startup world, especially when it comes to expansion. The biggest FinTech company in the Middle East knows all about risk, because it’s called Riskified. The Israeli company uses behavioral analysis, elastic linking, proxy detection, and machine learning to detect and prevent fraud and has raised $228 million in funding so far, so clearly investors don’t see it as a risk.

A common thread across many of the biggest names on this list is that they focus on helping us to make the payments we need to keep our lives moving, from Adyen in the Netherlands to PayPay in Japan. Klarna from Sweden has made headlines around the world thanks to its ‘shop now pay later’ functionality, which allows customers to delay their payments for online goods, making it a big hit with millennials and investors alike, earning it over $1 billion in funding.

The second biggest FinTech company according to the research is One97 from India, the country’s leading mobile internet company whose flagship brand is Paytm a digital good and mobile commerce platform and payments solution provider. Amongst its investors, coincidentally, is Ant Financial, demonstrating the power that the world’s leading FinTech companies can have, even when it comes to their competitors.

Many of these FinTech businesses are those that not only help consumers make payments but also keep other companies - including others in the FinTech world of course - running smoothly and growing quickly. One of these is Xero, one of 11 FinTech startups from New Zealand that is used by small businesses from around the world as accounting software, making sure staff and invoices are paid on time.

Money makes the world go around and these FinTech companies are leading the way in shaping how, where and when we can make our payments for goods and services, as well as keeping them secure and safe. But even this can only happen with the help of money from investors, and the right judgement when it comes to identifying opportunities, risks and challenges, especially during unprecedented global pandemics.