If any metal embodies the chrome-like luster of the future, it is silver. This makes it the ideal candidate for an analysis using that most high-tech of investment tools, alternative data.

Silver has also been making headlines recently: in July of this year, it broke out of a long-term range it had been stuck in between $15-20 an ounce for over five years, reaching a peak of $29 on August 10.

The breakout could represent an important turning point in metal’s price-evolution. The question for us, however, is could anything in the news analytics of silver have forewarned investors such a significant move was on the horizon?

Speculative forecast news, often written by experts as ‘investment advice’, is more future-orientated than other types of news such as market commentary, and research shows it provides a better basis for generating forecasts than quotidian reporting.

Might it be possible that in the seeds of forecast news lay the foundations of the rally to come? We can isolate the sentiment score for this type of news using RavenPack’s sophisticated news analytics platform and see.

Carrying out the exercise for silver shows that over the period from 2014-2020 aggregate forecast articles have, on balance, been more positive than negative. 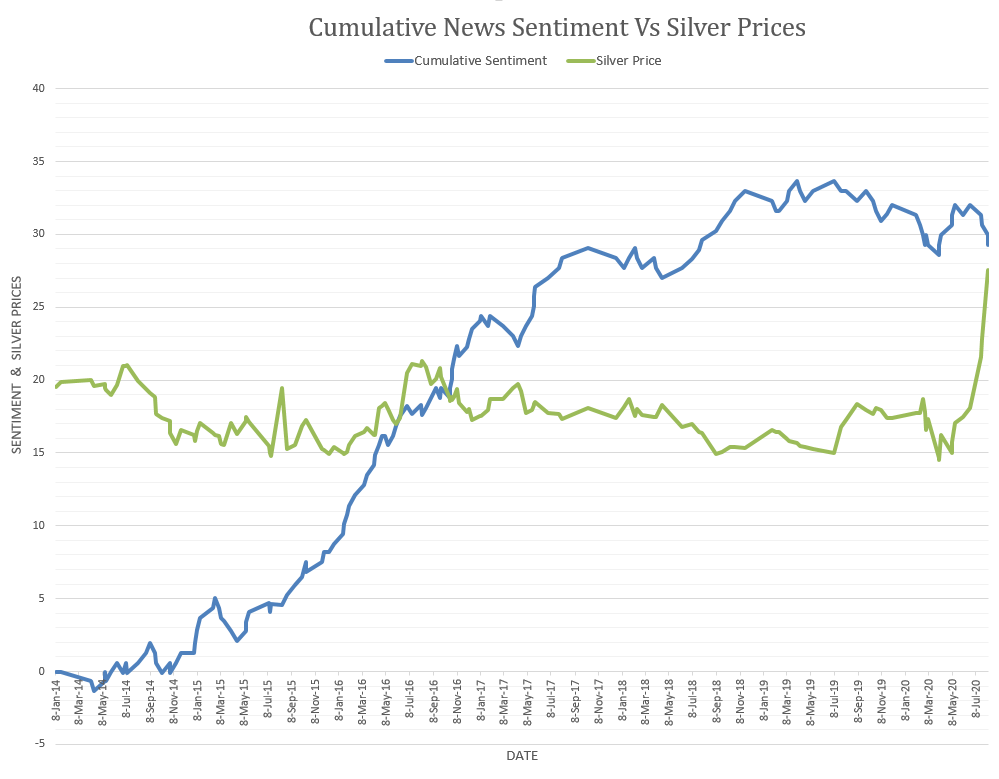 The steepest increase in cumulative forecast news sentiment occurred in 2016, but deaf to these bullish calls, the precious metal continued sideways in its range for a further four years.

Did forecast news sentiment provide a bullish signal prior to the sharp spike in July? Unfortunately, not. If anything the cumulative sentiment started to dip slightly in March and April, although that was almost certainly due to widespread negativity due to the novel coronavirus.

Sentiment has remained surprisingly strong since 2014, however, and it could be argued that it provided a supportive backdrop for the metal.

Going one step further, one might even say that it was ‘only a matter of time’ before the precious metal would start to move higher in tandem with the more bullish market consensus.

Negative yields effectively mean investors have to pay issuers to hold their bonds - a state of affairs that is in complete contrast to the usual relationship in which investors earn interest on their bonds. This has led portfolio managers to reduce their bond holdings and search for alternatives. Silver is one such alternative.

Increases in the number of articles published about a certain asset or related topic can act as a leading indicator of future market moves, research has found.

Could a steep rise in the number of articles about “negative yields” have heralded silver’s July blowout? 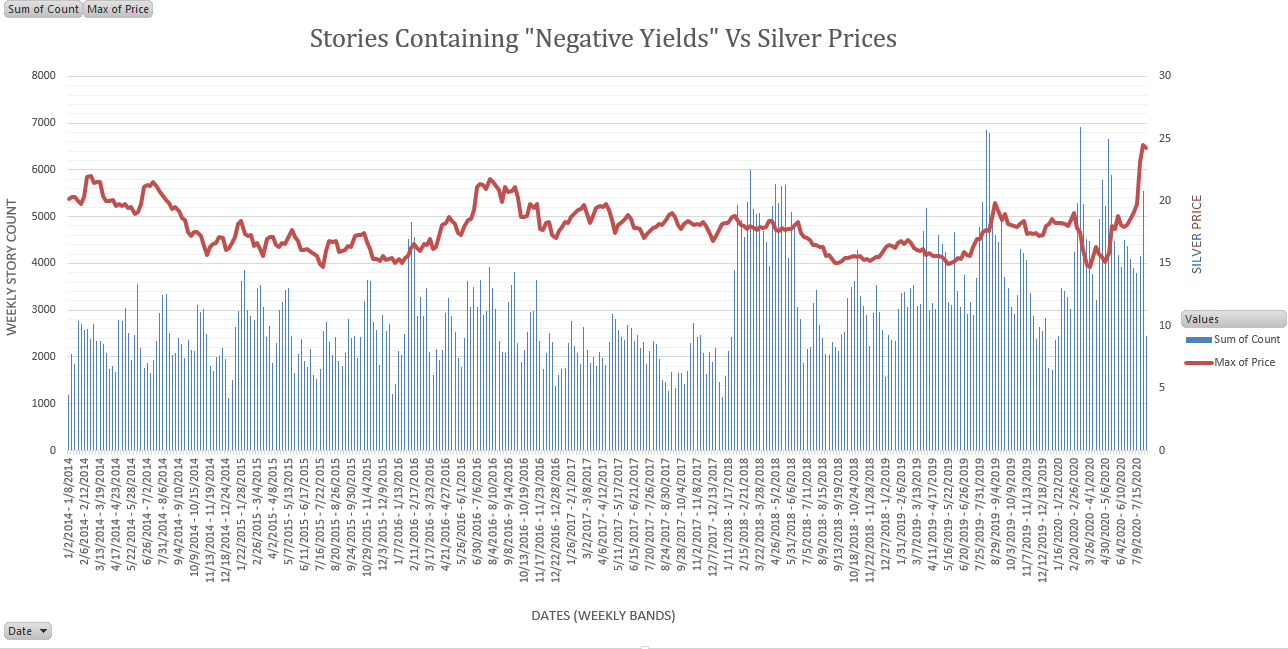 As the chart above shows, the weekly sum of articles about “negative bond yields” does show a lift in 2020 and several dramatic spikes prior to the July breakout, and, in hindsight, could have provided investors with, at least, an early warning of the dramatic move to come.

Silver often rises when investors fear inflation will erode the value of their cash holdings and decide to move it into more tangible assets - like gold and silver - that hold their value more reliably.

Increasing Money Supply is indicative of higher inflation and would be expected to correlate with higher silver prices.

We might hypothesize that an increase in news stories mentioning “growing money supply” or similar comment, might also provide investors with a forewarning of the sharp rise in the price of silver. 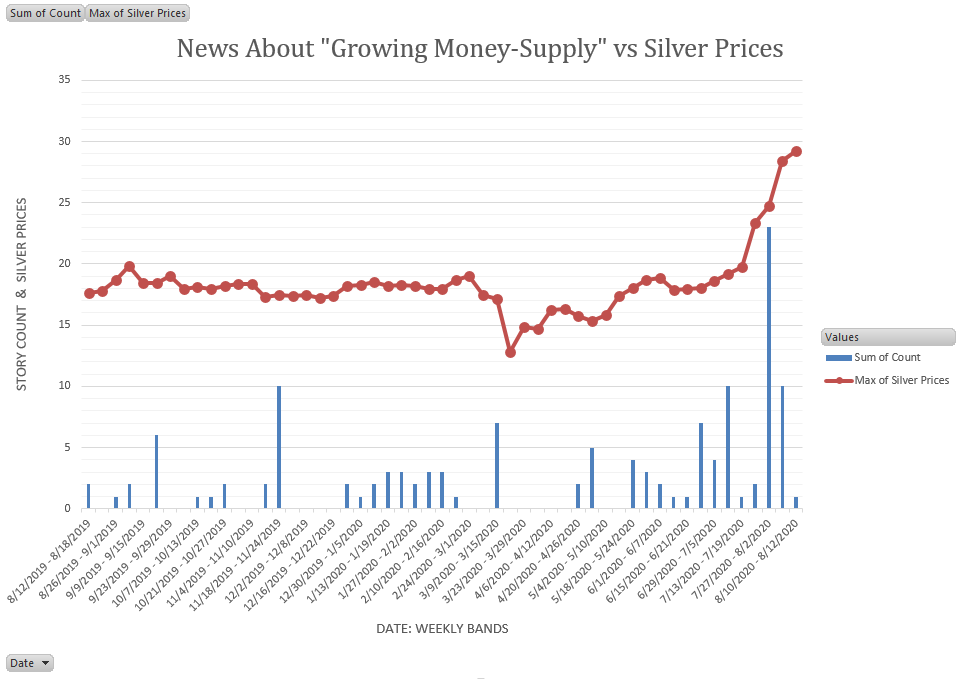 The chart above shows the weekly sum of articles about “growing money supply” plotted against silver prices. Note that the last week in July shows the highest number of articles about rising money-supply (23 in total), and this coincided with the steepest rise in the price of silver. The spike in articles also preceded silver’s last breakout move higher at the start of August.

There were several other weeks which experienced high story counts - in November 2019 and at the start of July - but of these, the one in November failed to indicate a subsequent rally in silver afterward, whereas the one in July occurred just before silver took off.

The study above far from constitutes a thorough investigation of how news analytics can be employed to forecast silver.

There are many ways RavenPack’s rich news analytics data can be used to develop forecasting models, the above are just some illustrative examples of how the data can be modeled.

Indicators such as those above, especially the one developed using news about “negative yields” hold out the promise of providing a confirmatory, validatory overlay, to other analytical techniques, whether they be technical and fundamental. Analysts can use the data to enhance their decision-making processes - and this is just scratching the surface of what is possible.