A new report from CGLytics that covers ASX executive pay in the time of the pandemic, entitled “Avoiding A First Strike During The Pandemic”, released today. The report looks at the executive pay landscape during the pandemic, in particular the transparency with which reductions have been shared and reflect total remuneration.

“The COVID-19 pandemic has had a severe negative impact on the global market and Australia is no exception,” said Aniel Mahabier, CEO of CGLytics. “Although, in the midst of the crisis, various Australian companies implemented strategies to maintain cash positions, we are still not seeing meaningful sacrifice at the senior level. The average CEO pay cuts represent only 2% of ASX 300 CEOs projected realised remuneration this year. With only 60 companies making CEO pay adjustments due to the pandemic, decisions around executive pay are going to be difficult to justify as unemployment remains high and share prices remain low. Many Australian companies are likely to find themselves in the position to defend their pay practices while being scrutinised by proxy advisors, investors and the society this proxy season.”

Avoiding A First Strike During The Pandemic: An ASX Executive Remuneration Study 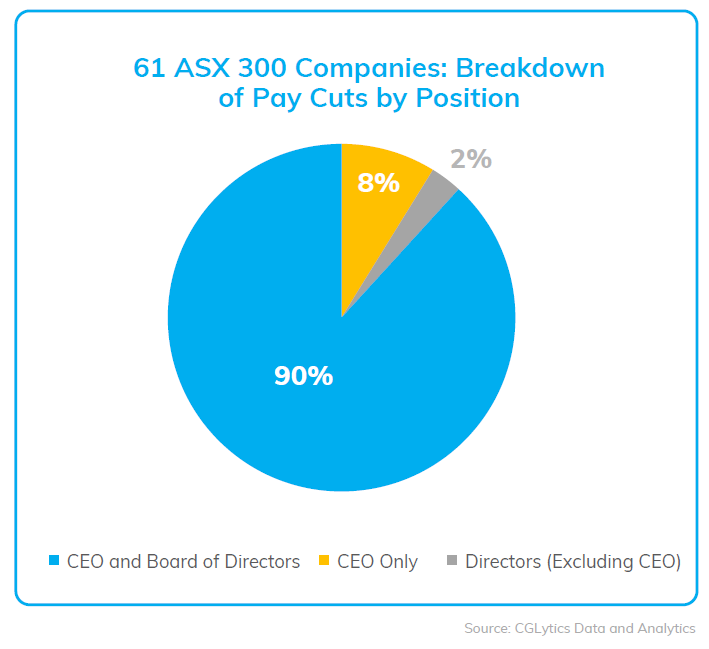 The COVID-19 pandemic has had a severe negative impact on the global market. Australia is no exception, with nearly one million Australians losing their jobs. Amidst the crisis, various companies called on their board of directors to develop and implement crisis management strategies to maintain cash positions and ensure the health and well-being of their employees3. Some companies have taken drastic measures by standing down employees or reducing executive, director, and employee remuneration to maintain liquidity. 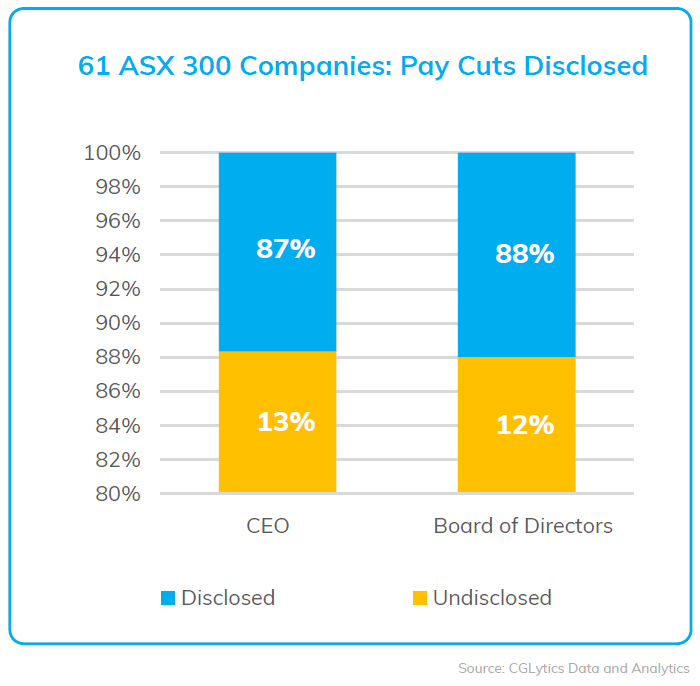 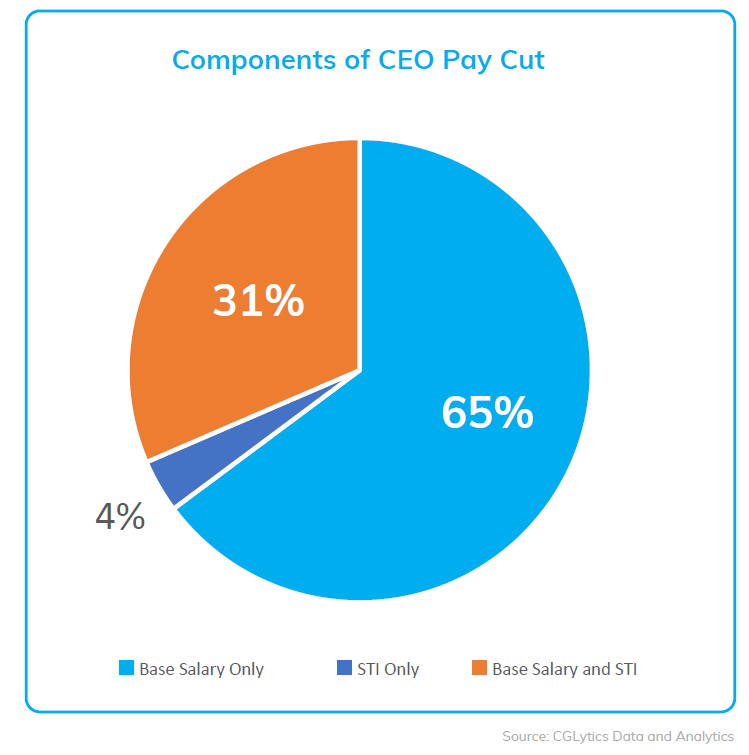 Nearly all companies initiated pay cuts only to their CEO base salary. However, 17 companies not only reduced their CEO salaries, but also reported a foregoing of their short-term incentives, two of them being Flight Centre and Vicinity Centres.

Flight Centre, one of Australia’s largest travel agencies, announced a 50% pay cut for senior executives and directors until at least the end of FY20. The CEO and executives of Flight Centre will also relinquish all short-term incentive components of their remuneration for the full financial year 2020. Despite announcing a strong balance sheet of AUD 1.3 billion in cash, the company announced the permanent closure of 428 stores and a request for AUD 900 million in financing. One of Australia’s leading retail property groups, Vicinity Centres, announced not only a 20% cut of executive salaries, but also a cancellation of their FY20 short-term incentives. The effects of the pandemic on the company were still detrimental, lowering the company’s property values significantly.

However, the company received support from its shareholders as they helped raise AUD 1.2 billion through 8 institutional placement.

CEO Base Salary Reduction Only a Small Price to Pay 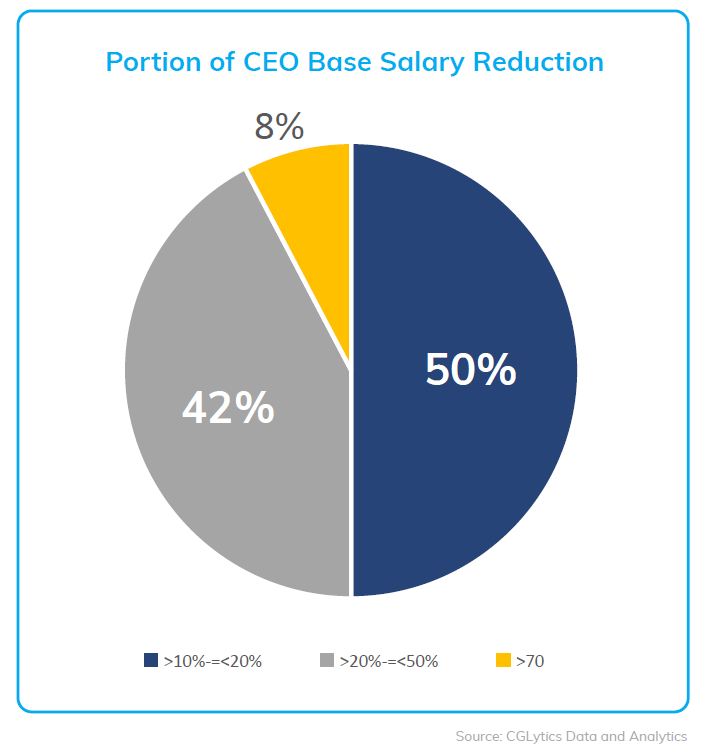 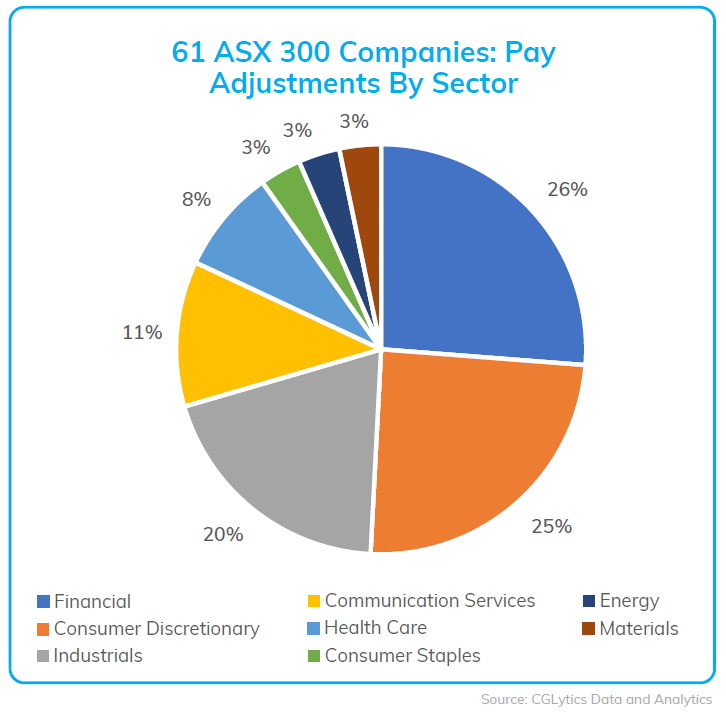 Among the 61 ASX 300 companies that reported pay cuts from March to the first week of August 2020, the largest portion (26%) came from the Financial sector, which includes real estate, capital markets, diversified financials, banks, and insurance companies. 25% of the companies with pay adjustments are from the Consumer Discretionary sector, which includes automobiles, consumer durables and apparel, consumer services and the retail industries.

The third largest sector is the Industrial sector, which includes airlines, transportation, capital goods, and commercial and professional services industries.

While the repercussions of the COVID-19 pandemic affected many different industries, the airline sector arguably suffered the most. Airline giant Qantas Airways released a statement revealing its intention to cut costs and maintain liquidity for the next six months. The airline company stood down over 25,000 employees and secured AUD 550 million in debt funding. Qantas CEO, Alan Joyce, and Chairman, Richard Goyder, have forgone their full salaries for the financial year, with board members and group executives taking a 30% cut in remuneration. Although the Australian government has begun easing some restrictions, the resumption of international and domestic air travel remains uncertain.

The retail industry has also taken a significant hit, with more than 40,000 retail workers stood down. One of Australia’s largest retail stores, Myer, stood down 10,000 store and store support staff in early March 2020. Myer’s CEO and Managing Director John King and the executive team have voluntarily suspended their remuneration during this difficult period. Despite the closure of its brick-and-mortar stores, Myer has seen a substantial increase in online sales, which has allowed for the return of 20% of stood down employees.