Excerpt from Whitney Tilson’s upcoming book, “The Art of Playing Defense: How to Get Ahead By Not Falling Behind,” on Calamity No 1: Loss of Reputation.

In yesterday's e-mail, I included an excerpt from my upcoming book, The Rise and Fall of Kase Capital.

Believe it or not, I'm also putting the finishing touches on a second book that I hope to publish by the end of the year: The Art of Playing Defense: How to Get Ahead By Not Falling Behind. (Longtime readers may recall the original title: All I Want to Know Is Where I'm Going to Die: The Five Calamities That Can Destroy Your Life and How to Avoid Them – I hope you like the new title better!) 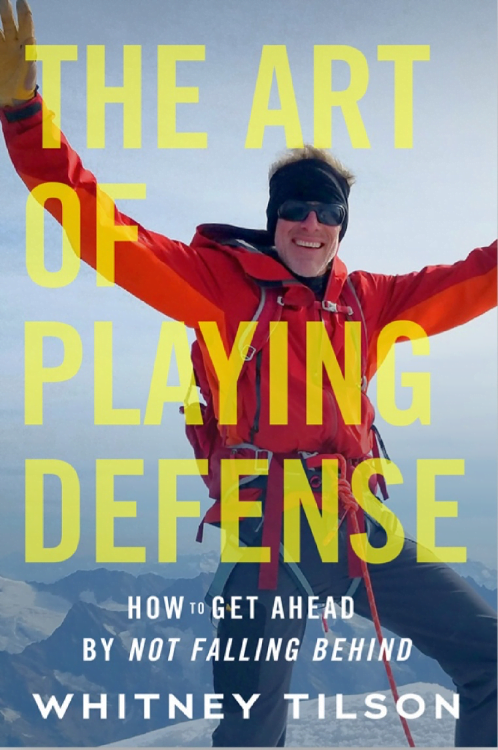 I'll be sharing excerpts from this book as well in my daily e-mails. Below is the first... Enjoy!

Calamity No 1: Loss of Reputation

If you're in the professional world – if you are, for example, a doctor, lawyer, or businessperson – your greatest asset other than your brain is your reputation. You will have a reputation for how hard you work, your sense of decency, and most important, your integrity. Whatever your reputation, it will follow wherever you go.

Cherish and protect it because, as Warren Buffett once said:

It takes twenty years to build a reputation and five minutes to ruin it. If you think about that, you'll do things differently.

I want employees to ask themselves whether they are willing to have any contemplated act appear the next day on the front of their local paper, to be read by their spouses, children, and friends, with the reporting done by an informed and critical reporter.

You need to be especially careful of your reputation if you're a public figure, where the scrutiny is greater. I am extremely sensitive to this danger because I send an investing-related e-mail to more than 75,000 people every weekday, an education-related one to 7,500 folks every week, a coronavirus-related one to nearly 5,000 people every other day, and a few every day to 250 to 1,000 recipients on various subjects – ranging from politics to adventure sports to pictures of my family. In addition, I regularly speak on live television, at conferences, and to reporters.

Thus, multiple times a day I run the risk that I will write or say something off the cuff that goes viral and ruins my reputation. I've made some small mistakes that have really scared me.

Right out of college, as I was helping Wendy Kopp launch Teach for America, I was interviewed by a reporter for the Harvard Crimson. In making a point about teacher shortages in many low-income communities, I said "many school districts just need warm bodies."

This crude and foolish comment was, of course, featured prominently in the article.

Wendy was so mad at me – deservedly so – that she never let me speak to the media again.

Years later, I sent an e-mail to my school-reform e-mail list in which I commented on the then-Mayor of Newark, New Jersey, Sharpe James, who was facing corruption charges. Being certain of his guilt (he was later convicted and served time in prison), I sent around an article about his indictment with the comment, "Hang him high!"

A few minutes later, someone e-mailed me back saying, "Whitney, did you really mean to use language related to lynching when referring to a black man?"

Of course not! I was horrified by what I'd written and immediately sent an apologetic follow-up e-mail.

Another time, I was on Bloomberg TV talking about Taser, a stock I was betting against. In explaining why, I said (among other things) that the company had no patents or valuable intellectual property.

About a week later, I received an e-mail from Taser's law firm saying I had defamed the company because it did, in fact, hold numerous patents, and demanded a retraction.

I had screwed up again. By not being careful with my words, I had exposed myself to substantial legal costs at the very least.

Fortunately, I was able to resolve the issue by replying with a letter apologizing for my mistake, pledging never to speak publicly about the stock again, and pointing out that if they forced me to publicly issue a retraction, it would only draw attention to an otherwise obscure interview that almost no one had seen. I never heard from them again, so it ended up being a low-cost lesson early in my career to be very careful when publicly criticizing a company.

Almost every day, I see a public figure who is in trouble for something they said or wrote, usually as a result of an off-the-cuff remark.

I don't want this to happen to me so now I proofread every mass e-mail before I send it and always try to be well-prepared when I speak on television, in front of an audience, or to a reporter.

Beyond writing or saying something dumb, another way to ruin your reputation is to do something unethical or illegal (which can also lead to a loss of freedom – i.e., going to prison).

The Fate Of David Sokol

Consider the fate of David Sokol, a former top executive at Berkshire Hathaway (BRK-B) who was once rumored to be Buffett's successor. He discovered a publicly traded chemical company called Lubrizol that he thought would be a great acquisition candidate for Berkshire Hathaway, so he brought this idea to Buffett, who agreed and eventually acquired it.

However, inexplicably, Sokol personally bought Lubrizol stock beforehand, thereby profiting from Berkshire Hathaway's acquisition. As soon as Buffett found out what Sokol had done, he had no choice but to immediately fire him and report what had happened to the U.S. Securities and Exchange Commission ("SEC"). The SEC ultimately took no action, but it didn't matter – Sokol's reputation was destroyed, and his career was over, all for an insignificant profit. For a single moment, he let greed overshadow his integrity, and was ruined.

It's critical to be disciplined and thoughtful about ethical gray areas and never engage in borderline (much less illegal) behavior. It's simple in concept but can be tricky in practice, and there's no room for error. One mistake can ruin your life.

Over the nearly two decades I ran a hedge fund, there were so many opportunities to break the law and/or ruin my reputation. Most of these situations were pretty clear, but some weren't.

Can I trade these stocks? To this day, I don't know the answer. So I just didn't.

Here's a specific example related to the stock for which I'm perhaps best known, Lumber Liquidators (LL). I bet against the stock and pitched it at the Robin Hood Investors Conference in late 2013. Then, in early 2014, I heard from someone in the industry that the company was sourcing and selling Chinese-made laminate flooring tainted with formaldehyde, a health hazard and clear violation of U.S. environmental regulations. Once I tested the product and verified my source's story, I wanted to bring attention to what this company was doing, both to protect American consumers and because I thought it might crush the stock (and therefore benefit my short position).

"Who better," I thought, "than 60 Minutes to break this story?" So I contacted a producer I knew there and, to make a long story short, they agreed it was an important story and started working on it.

At that point, I didn't know for sure if 60 Minutes was going to run the story, what it would say, or when it might air. But by December 2014, when Anderson Cooper interviewed me at length, I was pretty sure that they were going to do a major story that could really devastate the stock (which is exactly what ended up happening in March 2015), so I could have made millions of dollars had I further increased my short position.

But I didn't. I worried that the knowledge I had about 60 Minutes working on the story constituted inside information. To this day, I'm not sure if it was, but I didn't want to find out the hard way – and, to me, it didn't pass the front-page-of-the-local-paper test. So I didn't trade the stock at all until after the story aired.

I can't emphasize strongly enough that no amount of money is worth jeopardizing your reputation.