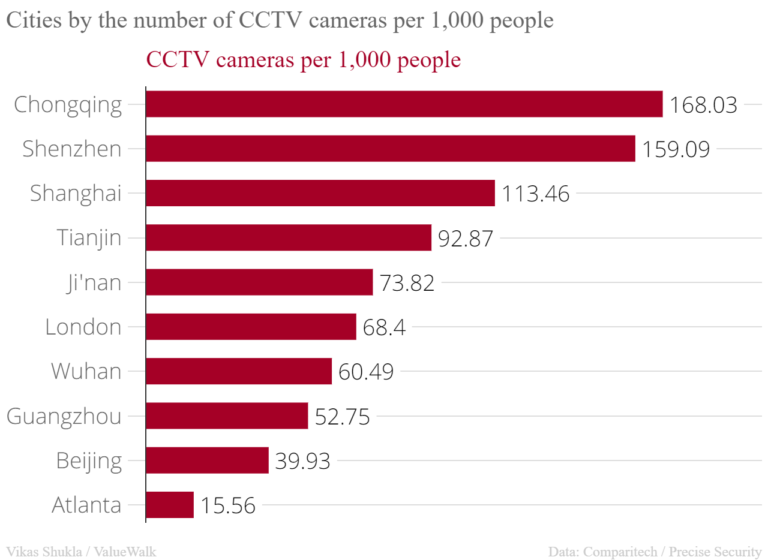 At the height of the Cold War, the US military planned to set up surveillance systems and nuclear weapons on the moon. We have closed-circuit television (CCTV) now, which we can install almost anywhere for a wide range of purposes. CCTV surveillance has skyrocketed worldwide in recent years. Here we take a look at the top 10 countries and cities that have the highest surveillance rate.

Some say the CCTV cameras help monitor traffic, observe industrial activities, and prevent crime. We can access the live footage remotely, store it in the cloud, and share it with anyone. But thanks to the growing CCTV surveillance and technologies like facial recognition and gait recognition, citizens' privacy rights and freedom of movement are under threat.

If you think that the increased surveillance rate helps reduce crime and improve safety, think again. Comparitech analyzed data from more than 120 cities worldwide and found that there is "little correlation between the number of public CCTV cameras and crime or safety."

More surveillance does not mean better public safety. But the number of CCTV cameras is growing at an explosive rate in most countries. The lists below are based on data from Comparitech and Precise Security.

Countries with the highest surveillance rate 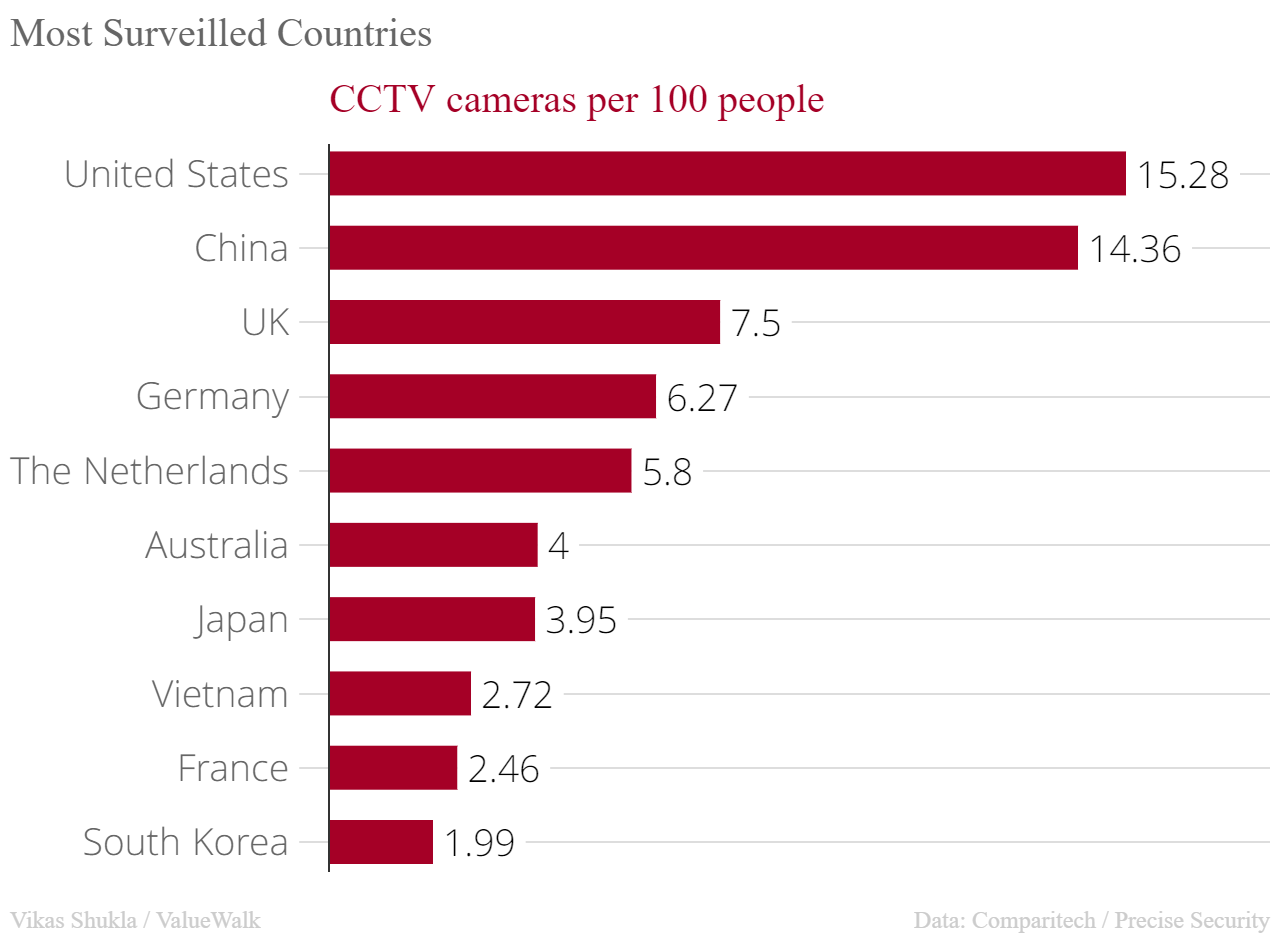 However, it could all change by the end of 2020. Beijing plans to have at least 626 million CCTV cameras installed by 2020 end. If it happens, the country will have a CCTV camera for every two citizens, significantly higher than any other country on the planet.

The Skynet Project, China's national surveillance system, is the largest in the world. The city of Shenzhen plans to increase the number of CCTV cameras from 1.92 million to 16.68 million in a few years.

The ranking is dominated by developed countries, with the UK, Germany, and the Netherlands rounding out the top five. Other countries on the list include Australia, Japan, Vietnam, France, and South Korea.

Facial recognition has come a long way over the last few years following the developments in artificial intelligence and machine learning. But it's still not highly accurate. So, Beijing uses it in combination with gait recognition to accurately identify individuals.

For the uninitiated, the gait recognition technology can identify you from a distance of up to 50 meters with 94% accuracy. It recognizes people based on their body language and how they walk. It also analyzes your body shape and leg movements.

China's mass surveillance and the brutal treatment of Uighur Muslim minority in Xinjiang province has drawn a lot of criticism from human rights activists.

Last year, the United States banned China's leading surveillance camera manufacturers and facial recognition providers including Hikvision, Dahua and SenseTime. They can no longer buy the US-made technology. The irony is that the US government itself was using more than 2,000 Hikvision and Dahua surveillance cameras until last year.

Most surveilled cities: Eight Chinese cities in the top 10

China is home to eight of the ten most surveilled cities in the world. The only non-Chinese cities are London (UK) and Atlanta (US). The Chongqing city in southwestern China is the most surveilled city with 168.03 cameras per 1,000 citizens. No matter where you go in the city, you'll find yourself surrounded by the watchful eyes. 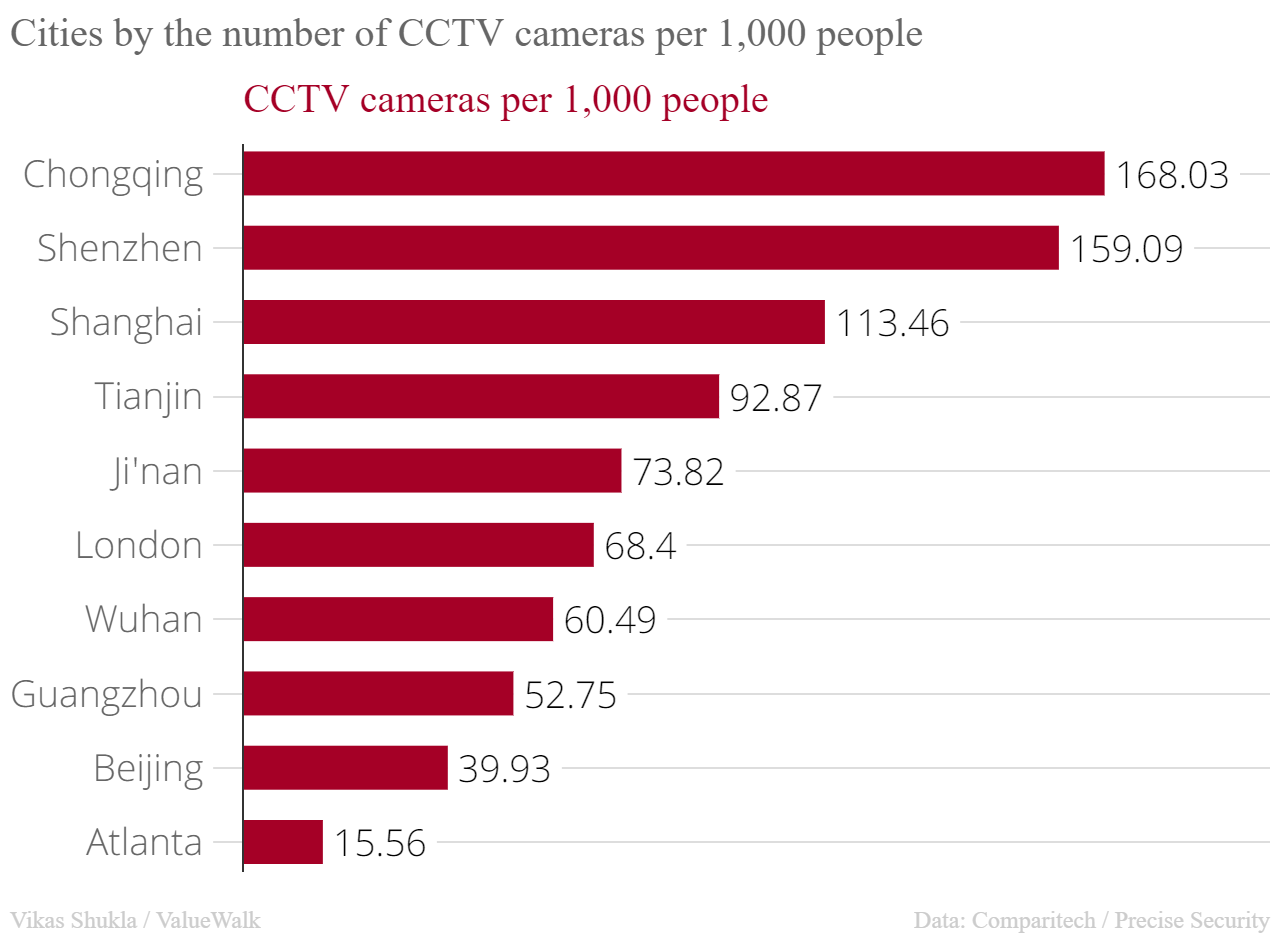