The gold price reached a new record high this week, beating the previous record set on Sept. 5, 2011. The gold price kept rising past the record high to new heights as the week wore on, and now the $1,940 record that was set on July 28 appears to have become the new floor for the price amid today’s pullback.

So is there more gas in the tank of the gold rally, or are things about to cool? The World Gold Council sees plenty of reasons to expect the yellow metal to keep rising from now on, although volatility could increase in the near term.

The organization said this week's record high gold price has been driven by a combination of several factors. They are high uncertainty, very low interest rates and positive price momentum. All of these factors support investment demand, but the World Gold Council added that there are reasons to believe that the market is still early in the cycle.

The coronavirus pandemic is still far from being over, and its impact on the world's economy is still being worked out. The organization said some countries like China, South Korea and parts of Europe seem to be turning a corner. Globally though, hope of a rapid recovery is gone.

Central banks have cut interest rates and rolled out quantitative easing measures and other rescue measures, while governments have rolled out massive rescue packages for their economies. All these moves have caused some to worry that easy money instead of fundamentals is driving the stock market rally. All the extra money that's being poured into the system could result in extremely high inflation or at the very least, currency debasements.

The World Gold Council noted that the gold price more than doubled from about $900 in early 2008 to its previous record high three years later after the Global Financial Crisis. However, to reach the latest record high, the gold price has risen less than 30% since the pandemic began.

After adjusting for inflation, the current gold price is about $200 short of 2011's record high and far below the January 1980 record high equivalent to about $2,8000 in today's money. 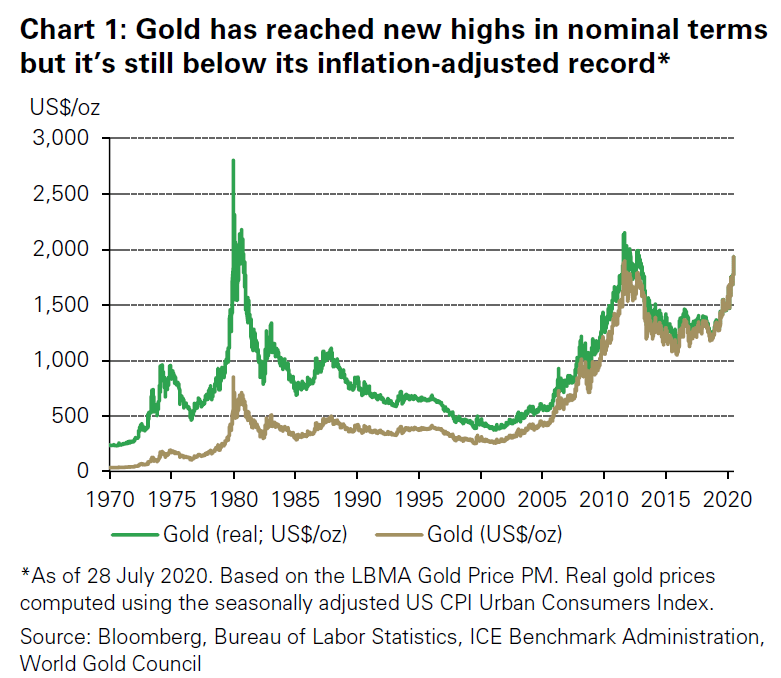 Changing dynamics in the gold market

The organization added that historically, gold's price performance has been positively correlated with gold derivative positioning. However, most of this year, net long positions based on the Commitment of Traders Report, which is usually linked to more speculative trading activity, have been falling as the gold price was rising.

The World Gold Council said this was occurring due to supply chain disruptions in the gold market impacting COMEX futures. On the other hand, gold-backed exchange-traded funds have seen record inflows so far this year.

Gold ETFs have added $47.8 billion as of July 27 across all regions. The organization said anecdotal evidence indicates that buy-and-hold investors are contributing to those gains and also that some investors have moved from futures to gold ETFs.

This shift results in some changing dynamics. The most obvious is that while gold ETFs are backed by physical bullion, futures can be settled as cash or rolled. Just a fraction of gold futures result in physical delivery of gold. Additionally, futures allow for increased leverage, which may increase volatility further.

The World Gold Council noted that the most recent leg of the run-up to the latest record high gold price has come fast. It took about four months for the yellow metal to rise from $1,650 to $1,800 an ounce but less than four weeks for it to reach $1,950.

The organization added that the sharp depreciation of the U.S. dollar drove this uptick, but the magnitude of the change is magnified by the metal's 14-day Relative Strength Index, which hit a high of 88 on July 28. This is generally a sign that the gold market could be overbought.

However, it added that gold's three-month and one-year rolling returns have moved by less than two standard deviations. Both measures are much lower than levels seen in past times of strong movements. The council added that this suggests the magnitude of the gold price's recent move isn't unprecedented.

It also warned that there could be some consolidation in the gold price, although there is a strong case for investment demand in the yellow metal to be supported.

Edward Moya of OANDA said in a recent email that after the 10% rally in gold prices to reach this week's record high, they seem ripe for a pullback. However, he added that safe-haven demand is still steady after "a disastrous Q2 GDP reading, consistently high weekly jobless claims figures, partisan politics preventing progress toward virus relief bill on Capitol Hill, and nervousness about four giant tech earnings after the close."

"Gold is sinking alongside all risky assets but that should be short-lived," he added. "Gold's bullish trend is intact, but a healthy pullback just ahead of the $1900 level might be needed before breaking past the $2000 level. Virus uncertainty, election risks, a stalling recovery and no signs of a slowing stimulus trade will have investors buy any dip in gold prices for the rest of the year."