Competition in the workplace has a reputation for being toxic and damaging to relationships between team members. Left unchecked, hypercompetitive workplace atmospheres can cause stress and anxiety (not to mention decreased productivity between employees). When individual performance is the only yardstick employees use to gauge their success to that of someone else, it’s easy for the bigger picture to get lost in the shuffle.

Still, there are plenty of hiring managers who see an inherently competitive spirit as a positive trait in potential candidates and look to bring that mindset into their organizations.

So how do businesses encourage healthy competition without letting things go too far, and can you really have a “positive rival” at work? To find out, ResumeLab surveyed over 1,000 people for an unbiased look at the state of competition in the modern workforce. In addition to assessing how many employees consider themselves as competing against their co-workers, ResumeLab broke down their answers even further to understand how workplace rivalries affect men and women differently.

A majority of both men and women acknowledged a same-sex rival in their existing jobs, though men were nearly twice as likely to have a negative rivalry with women than women were with men. In most cases, rivalries existed within the same job level, except among senior managers where more than 1 in 3 rivalries were with people in middle management positions below them.

Despite occasionally having negative experiences, 78% of employees consider their rivalries at work a healthy experience. More specifically, certain behaviors between “rivals” were more likely to be perceived with positive intent rather than malicious. Giving honest performance feedback (49%), providing learning opportunities (43%), and rewarding top performers (42%) were typically perceived as positive efforts between co-workers.

Among rivalries that were interpreted as being negative or toxic, roughly 1 in 5 employees said that none of the behaviors listed (including giving feedback or setting goals) were seen with positive intention.

Employees with positive rivalries were more than twice as likely as those with negative competitors to perceive their company as creating a healthy environment for competition.

Employees with positive rivalries were also 12 percentage points more likely to indicate competition at work made them more productive, while those engaged in negative rivalries were 14 percentage points more likely to see no change in their productivity. And employees with a positive rival, someone who challenged them or occasionally offered them feedback, were twice as likely as those with negative rivals to earn promotions at work.

Counting the Value of Positive Rivalries

People with positive rivals in their workplace weren’t just more likely to get promoted, they also earned higher salaries, on average.

Compared to the roughly $44,500 a year employees with no rival were earning, those with negative rivals earned over $8,000 more at $53,000. Employees with positive rivalries earned the highest salaries, averaging over $57,000 annually.

For many people, positive rivalries equated to a higher frequency of competitive achievements. When a rival achieved a positive advancement, it could push the other further in their professional pursuits. Employees who reported having a positive rival at work were close to twice as likely as those with negative rivals to reach their personal goals.

Based on their existing jobs, employees who felt they had competition at work reported high rates earning a raise (58%), earning a promotion (48%), acquiring a leadership role (44%), and getting recognition for a project (37%).

Rivalries also had the potential to become powerful motivation tools with more than half of employees engaged in workplace competition taking on additional projects to compete with their rivals and more than 2 in 5 working overtime for the same purpose.

For many employees, competition exists in the workplace, whether you want it to or not. Perhaps competition is indicative of the human spirit, and we’re naturally inclined to measure our own successes against those of others.

Ultimately, what remains to be seen is whether those rivalries are forged out of a healthy desire for competition or from a more toxic, self-centered perspective. Positive rivalries have clear advantages over negative competition in the workplace. Employees who felt positively about their rivals clearly indicated they valued their feedback and the learning opportunities they presented. Not on accident, it seems, employees with healthy rivalries reported being more satisfied with their career and earning a higher salary.

While it’s not entirely clear whether toxic workplace culture creates toxic rivalries or if employees themselves are responsible for ensuring their competitive spirit comes from a good place, employees should want to engage in healthy rivalries actively. One way or another, their success will thank them for it in the end. 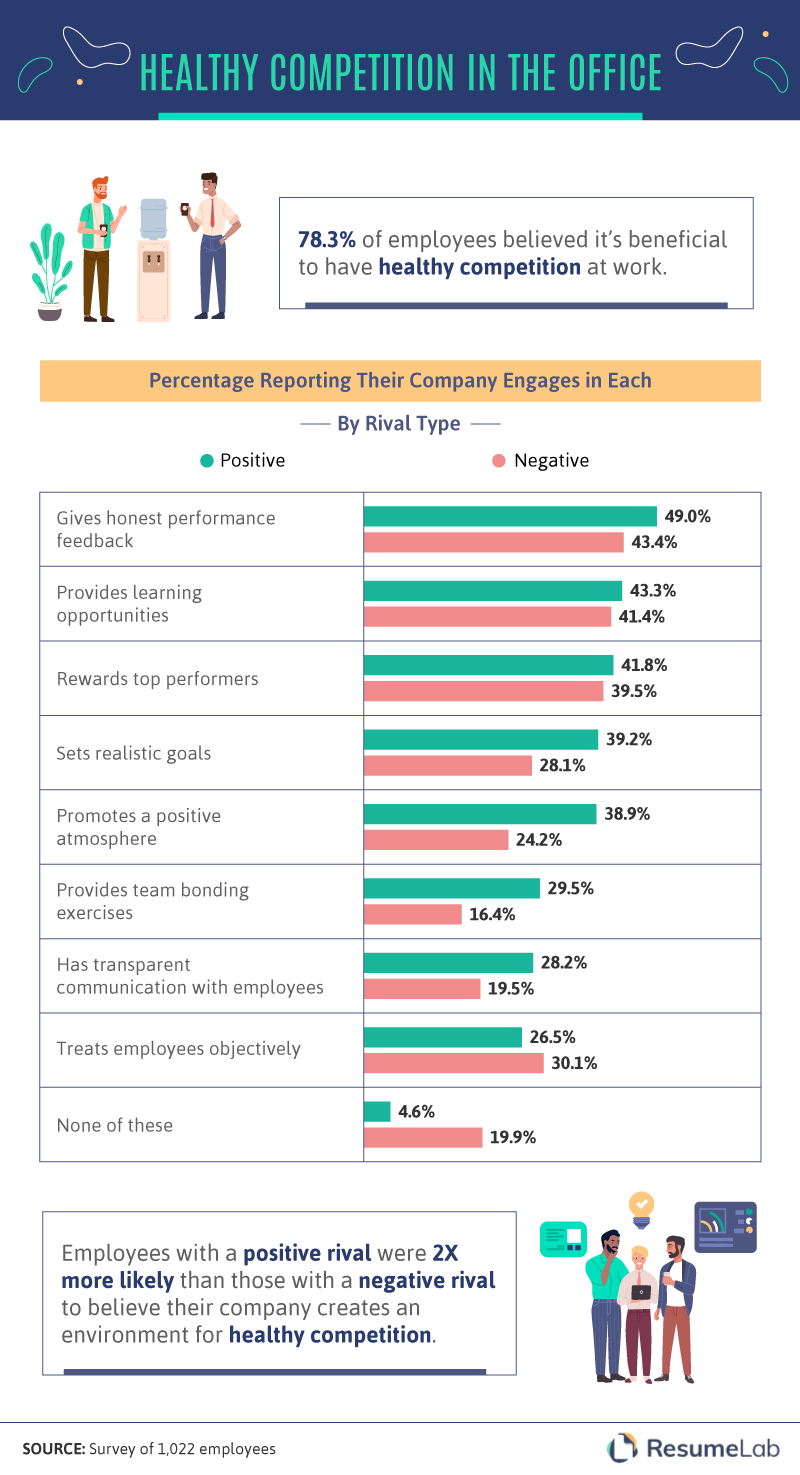