Whitney Tilson’s email to investors discussing is Tesla Inc (NASDAQ:TSLA) now a good short? Doug Kass thinks so; excerpts from yesterday’s e-mail to my coronavirus e-mail list; the best initial contact he has ever read.

Is Tesla Now A Good Short?

Does this finally apply to Tesla's (TSLA) high-flying stock, which was up big pre-market (though traded flat this morning) after reporting its fourth consecutive quarterly profit, thereby qualifying it for inclusion in the S&P 500 Index?

I knew better than to get in the way of the biggest story stock I've ever seen, which is why I told my readers on October 24 – when Tesla was trading for less than $300 per share – that it was no longer a good short after the company surprised investors by reporting a profitable quarter.

But now, having risen nearly six times since then, swelling its market cap to around $300 billion, is it finally a good short?

My friend Doug Kass of Seabreeze Partners thinks so. As he wrote this morning:

Tesla (TSLA) is no longer a hard to borrow (short) – so, in accordance with my core shorting tenet of avoiding high short interest relative to average daily volume and float, I am free to short the stock.

I shorted even though I expect the stock to be included in the S&P (which I believe to be fully discounted – and more!) after achieving profitable quarterly results.

Tesla, with a market capitalization of over $300 billion, reached profitability by virtue of a heavy dose of regulatory credits, so it was a poor quality report.

While the capacity expansion of the next gigafactory in Texas will expand the company's delivery capacity, I have written volumes on Tesla's fundamentals – a more competitive EV market, etc. – in the past so I see no need to reiterate my views which have not changed.

Regarding Doug's point about the source of Tesla's profitability, here are the facts: in the past four quarters, the company has reported cumulative GAAP net income of $368 million – but not from selling cars. Rather, this has been driven by carbon credits of more than $1 billion. (Over the same period, Tesla's market cap has grown by $248 billion.) This is what Tesla's net income would have been minus those credits (from @TESLAcharts on Twitter): 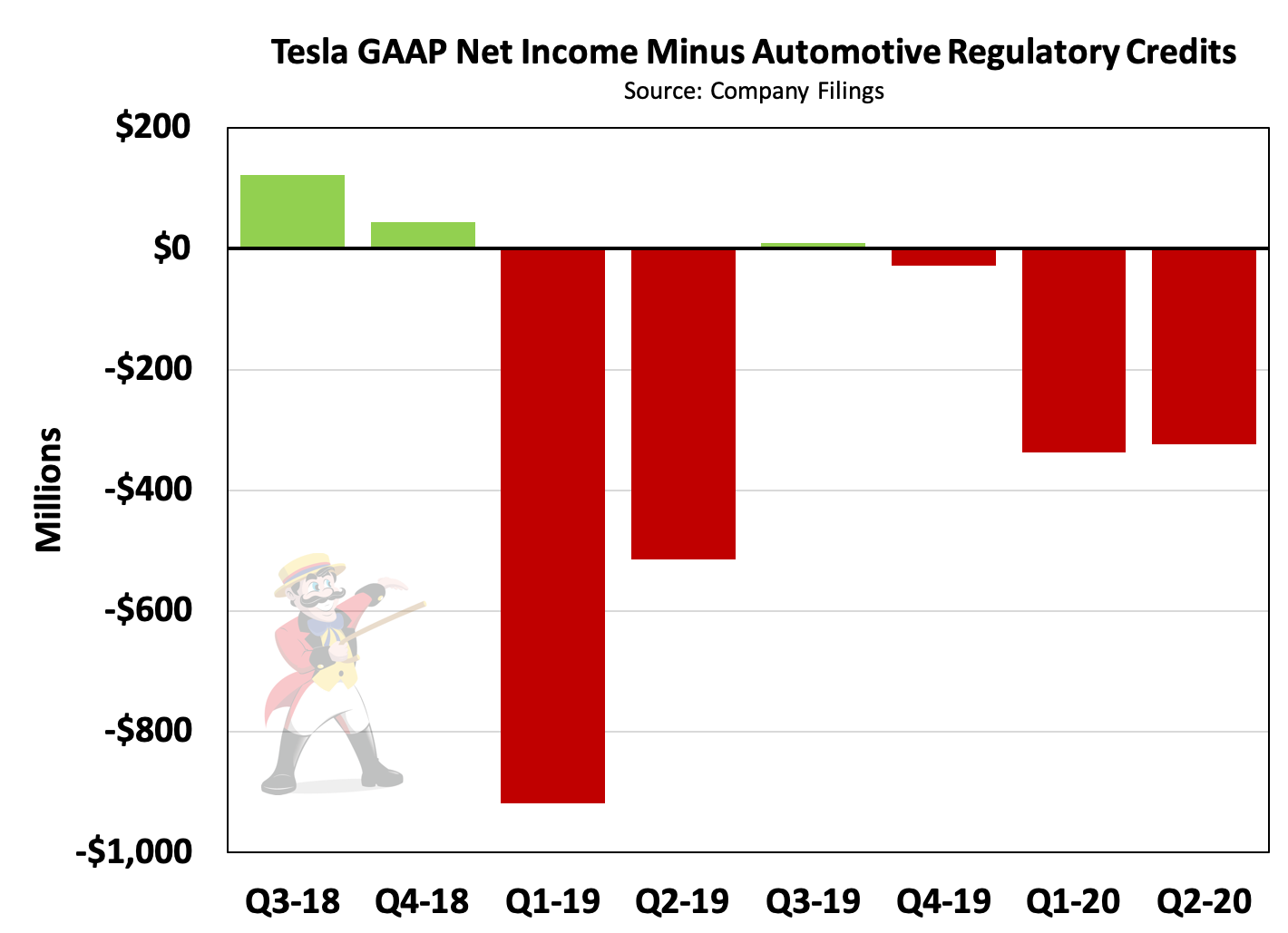 And, unlike other richly valued tech companies like Amazon (AMZN), Alphabet (GOOGL), and Facebook (FB), it's not like Tesla has been growing. In fact, as you can see in this chart (also from @TESLAcharts on Twitter), the company's revenue has declined over the past eight quarters: 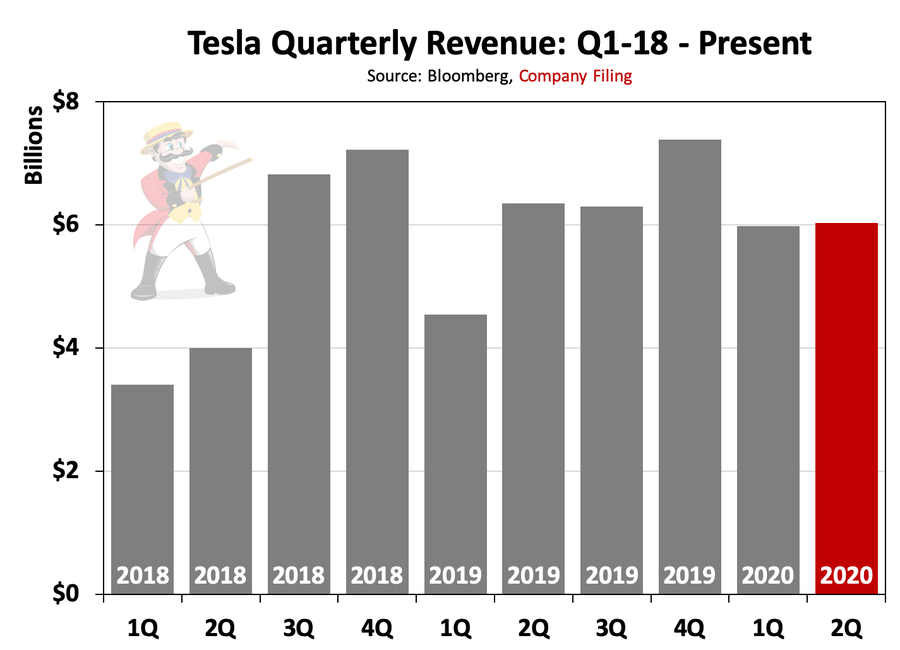 In summary, I'm not pounding the table that Tesla's stock is a great short here. On the fundamentals, the company has a big lead in multiple enormous emerging markets, making this a very open-ended situation. Plus, to their credit, CEO Elon Musk and his engineers have consistently achieved things I wouldn't have thought possible. And, as for the stock, the cult around it is unlike anything I've ever seen.

7) Picking up where I left off in yesterday's e-mail about step 3 of cultivating mentors – a compelling initial contact – here's the best I've ever read:

We have never met. My name is Angelo Martorell and I am a recent 2015 Wharton MBA grad. I am a fan of yours both in the investing world and more recently in regards to your stance regarding our current president. Like him, I went to Wharton; unlike him, I was born in Mexico.

I had an incredibly tough time recruiting for an investment job during and after my MBA. Even though I won more stock pitch competitions than anybody at Wharton including the Boston Investment Conference, and the Sohn Investment competition, employers such as Baupost, Tiger Global and about 100 other hedge funds found a way to ding me.

After finding a position on a fund that soon after closed shop, I started my own fund with $4M. I have a ~120% return since June 2016.

I respect your knowledge on investments – sometimes we are on the same side, and sometimes on the opposite. I believe you are a great person of integrity. I am completely self-taught, and have sold a business as a CFO before Wharton in CA. I am a 6x cycling national champion in both Mexico and the U.S.

Bottom line is I have no mentor. I have found few people to trust in this industry. I went through community college when I moved to the U.S. when I was 17 and my family has no connections.

If you have time to chat or feel inclined to give advice, you would have no idea how much it would mean to me.

Very best regards and from a Mexican – Gracias,

Pretty much every sentence here is compelling and personal – either to him or to me. Angelo had clearly done his homework.

I was happy to meet with Angelo. He became one of my first students at Kase Learning, and he and I now also have a close professional and personal relationship.

By the way... If you're writing to a current or potential mentor, whether via letter, e-mail or text, don't be sloppy. It needs to be clear, concise and well-written. If the person is older, you need to be at least somewhat formal. The salutation should be "Dear" instead of "Hi," and don't use the person's first name – it's "Mr." or "Ms." The first line might be something like, "It was a genuine pleasure speaking with you" not "It was great talking to you." And at the end, say "Sincerely yours" not "Best."

Lastly, beware of typos. The one that really drives me crazy is when someone tells me what a big fan they are of Berkshire Hathaway (BRK-B) CEO Warren "Buffet" (it's Buffett!).