1) My colleague Enrique Abeyta remains bullish on the market.

He thinks that the mostly southern states currently grappling with a surge in coronavirus cases (Florida, Texas, Arizona, California, etc.) will bend the curve in the next four to six weeks, in the same way New York, New Jersey, Connecticut, and Europe did. This, combined with the massive liquidity injection from the Fed, leads him to conclude:

2) My friend Doug Kass of Seabreeze Partners has the opposite point of view: he thinks that the market is currently more overvalued than at any time in the past few years, as he explained in a note on Monday:

The Bear Case: An Economic and Business Reckoning Lies Ahead – In a 80% to 85% Recovery

* The disruptive impact of the pandemic will linger for years.

* Social unrest and reduced profitability and economic growth – relative to consensus – stand to be a feature of 2020-23. 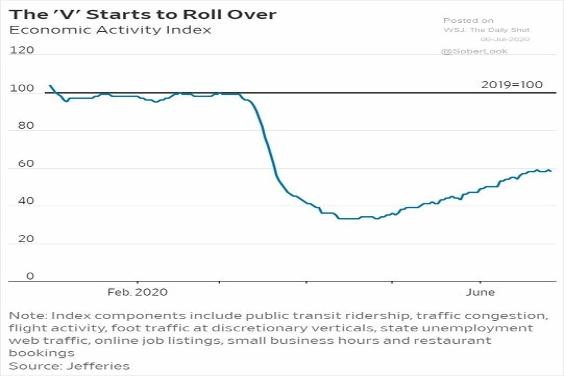 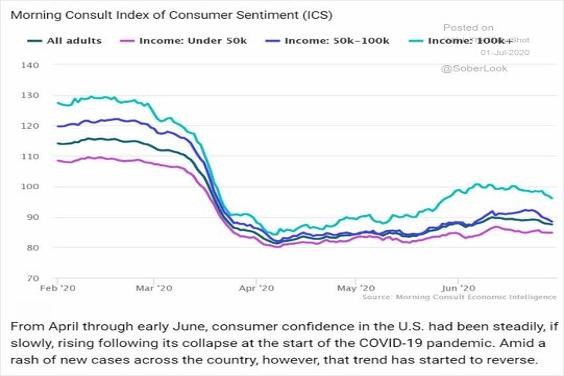 "More than any other time in history, mankind faces a crossroads. One path leads to despair and utter hopelessness. The other, to total extinction. Let us pray we have the wisdom to choose correctly." – Woody Allen

In aggregate terms, COVID-19 will likely have a sustained impact on the domestic economy – in reduced production and profitability – for several years, and in some industries, forever.

At the core of my concerns:

* Important Industries Gutted: Several key labor-intensive industries – education, lodging, entertainment (Broadway events, concerts, movie theatres, sporting events), restaurant, travel, retail, non-residential real estate, etc. – face an existential threat to their core. For these industries, the damage is done as they simply cannot survive the conditions they face. For these gutted industries, we face, at best, an 80% to 85% recovery in the years to come. It should be emphasized than in the case of some of these sectors, like retail, COVID-19 sped up what was already a secular decline.

* A Negative Knock-On Effect: Tangential industries, like food and other services, that surround less utilized office, mall and other spaces will also get hit. They, too, face at best, an 80% recovery, in the years to come.

* Widening Income and Wealth Inequality: The combined unemployment impact will run deep and cause not only adverse economic ramifications but lead to intensified social imbalances.

* A Battered Public Sector: With a lower revenues base, the federal government and municipalities will be forced to cut services (and unemployment).

* Rising Tax Rates and Redistribution: To fund this shortfall, effective tax rates will be steadily rising – exacerbating the disruption above and creating a less than virtuous cycle.

* Weak Capital Spending: With a large output gap and higher debt loads ($2.5 trillion of debt has been tacked on to year-end 2019 total non-financial debt of $16 trillion), the outlook for business fixed investment growth appears unappealing over the next several years.

* The Competitive Influence of Zombie Companies Exacerbate Lower Profitability: Corporations will face further pressure on profit margins from "zombie companies" that compete aggressively on cost and take longer to die because of low interest rates and weak loan covenants.

* Small Businesses Gutted: The greatest brunt from the pandemic is faced by small businesses that historically account for the largest job creators.

* The Specter of a Secular Erosion in Unemployment: Permanent job losses will be surprisingly large – that's a consumption killer.

* More Cautious Business Confidence and Spending: The surviving companies, ill prepared operationally and financially, in early 2020 for the disruptive impact of COVID-19, will be forced to maintain a "buffer" of additional capital (and cash) in the event of another unforeseen event or tragedy. In all likelihood, this will make for less ambitious capital spending and expansion plans relative to the past.

* Financial Repression Holds Multiple Risks: A sustained period of low interest rates – necessary (by some) to offset reduced economic growth – could backfire. Repressing interest rates runs the risk of a pension fund crisis, an intransigence on the part of businesses to expand (there is "no rush") and may impair the U.S. banking system (which still possess an important credit transmission role).

* A Political Stasis: Political divisiveness and partisanship could intensify – dimming the probability of constructive, pro-growth fiscal policy, so necessary in a low growth economy.

These combined concerns will likely lead to a sustained period of disappointing economic growth and corporate profits.

Social unrest, demonstrated in the last two months, will likely become a feature of the sharp political divide caused, in part, by the burden of disruption falling on the lower and middle class (as well as continuing the widening income and wealth inequality).

While the Federal Reserve can provide the necessary ammunition (and liquidity) to briefly stabilize activity – it is unlikely a longer term solution.

As we pass another Independence Day, the downcast prospects will probably be felt in the weeks and months ahead.

These are not an ingredient for a Bull Market or for rising valuations.

Rather, the above factors may be an ingredient to:

2. Rising economic uncertainty and cautiousness in the C-suite.

3. An unsteady period of growth.

Here's my take on this debate: I'm neither bullish nor bearish.

As a nation, I think we're continuing to botch the response to the coronavirus such that its effects linger and hamper our economic recovery. But this is being offset by the unprecedented liquidity injection into the economy and markets. So which factor wins? I call it a toss-up and think the markets will be range-bound for a while, which is why my personal portfolio is currently 63% invested in equities. This gives me plenty of exposure to the upside if Enrique is right, but also plenty of "dry powder" if Doug is...

3) This article on the front page of yesterday's New York Times is certainly consistent with my recent experience: Months Into Coronavirus Crisis, U.S. Cities Still Lack Testing Capacity, The NYTimes.

A week ago today, I was in rural eastern California and wanted to get a COVID-19 test so I could stay at my cousin's house on Sunday night before I flew home on Monday morning. I Googled "COVID testing Bishop, California" – the nearest town of any size – and quickly found a drive-in site. But when I called to make an appointment, they said tests were only available for people with symptoms.

They did, however, refer me to another drive-in site directly across the street. This was run by Project Baseline, which was founded by Verily Life Sciences, a subsidiary of Alphabet (GOOGL). My friend and I were able to make appointments only 30 minutes later and got tested without leaving our cars. Here's what the site looked like:

So far, so good...Unfortunately, however, a sign said it would take two to five days to get results... and when I asked which end of that range was more likely, they said the labs were really backed up so it would be a minimum of five days. Sure enough, a week later, I still haven't gotten my results – only an e-mail yesterday saying that my "COVID-19 test results are still being processed and will be sent to you as soon as they are ready."I think my experience speaks to the continuing large backlogs in testing, which is a big problem, as the article above notes: In some cases, test results take four to six days, far longer than the 24 hours health experts recommend to most effectively isolate the ill and track people they have had contact with.Best regards,Whitney