The Broad Market Index was down 0.27% last week and 55% of stocks out-performed the index.

During this week’s small SEC filing update, we are reminded of the importance of a rising gross profit margin. This indicates that the company is achieving increases in prices of their product or service at a faster rate than their costs of goods sold. Alternatively, it indicates that costs of goods sold (often dominated by labor costs) is rising at a slower rate than prices. The latter is more common and often referred to as "efficiency gain".

In fact, it is evident that labor is collecting a smaller share of value generated by the company. In a capital-intensive company that would probably be expected. More capital applied creates better use of technology, more efficient use of labor and more incentives from government. With the ultra-low interest rate environment of the past few years we are now seeing many companies bulging capital expenditures at the expense of a weaker financial condition.

The gross profit margin is more difficult to interpret correctly in recent quarters because of a change in accounting policy related to leases that resulted in a new ‘non-cash cost’ appearing. Companies were not required to show a comparable for the prior year. So, for most companies, if the non-cash cost typically "Amortization of the Use-Value of Leases" is not removed from costs of goods sold then the gross margin will appear to fall when it is not.

Even with the adjustment for the accounting change, the gross margin has been falling on average and more frequently in recent quarters. As we go through the current quarter update, watch your portfolio updates, and sell falling gross profit margin companies (red top rim of the Money-Tree pot) particularly with shares trading at premium prices (red negative price forecast).

For companies, easy access to capital markets has been too hard to resist (now lower cost than ever and even free or forgiven under PPP). This week we saw financial statements from the other two of the big three airlines. Among them, DAL, UAL and AAL they issued $1.65B in stock and $16.4B in bonds. Talk about preferential access, AAL is the post-bankruptcy AMR Corp which destroyed shareholder value, reneged on its retirement promises and exploited the taxpayer. All to create a new company that, little more than a decade later, is again cash flow negative and raised billions in capital markets to do nothing more that stave off bankruptcy. With big three sales growth down nearly 90%, labor costs are down about 30% and other costs about 50%. The big three are sustaining $6.7B in labor costs this quarter. With $33B accumulated in cash on balance sheets in the past six months, the big three can sustain that level of labor costs for 5 quarters or late 2021.

Without a rapid rebound in the demand for air travel (looking less likely), we will see another consolidation of the airlines with the destruction of shareholder value, large layoffs and early retirements.

Even with the few companies that have reported financial statements for the second quarter we are seeing significant reductions in capital expenditures. The current level of capital expenditures is unusually high as many companies have taken advantage of easy money to borrow and build. The ideal outcome is expanded revenue and a leveraged cash acceleration as the company generates the efficiency gain.

Now, with demand and revenue broadly falling, the outcome is: over-capacity, closures, layoffs, and bankruptcies. As with the airlines, widespread consolidation may be postponed by the Cares Act, but only until September. Make sure that companies in your portfolio are maintaining a rising gross profit margin. 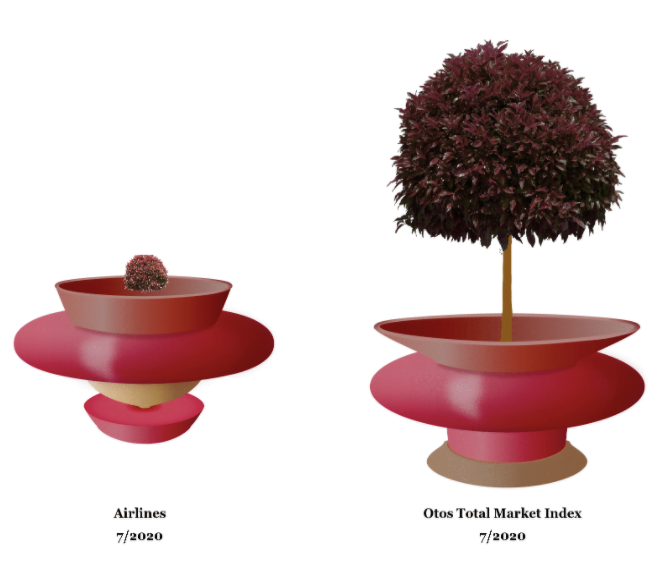 A special invitation to experience your financial reality as FREEDOM AND EMPOWERMENT.

Bob Gay, Founder of Otos, in association with The FENG will be moderating a panel next Tuesday where they will discuss the evolving cash flow crisis from the economics, bond market and corporate cash flow points of view. The ability of the global Central Banks to "do whatever it takes" and the capacity of capital markets to provide the financing that companies will need as the Covid-19 crisis extends are essential to decisions.

Register now for next Thursday July 28 at 8am Eastern:

| The State of Capital Markets - The Macro Picture|