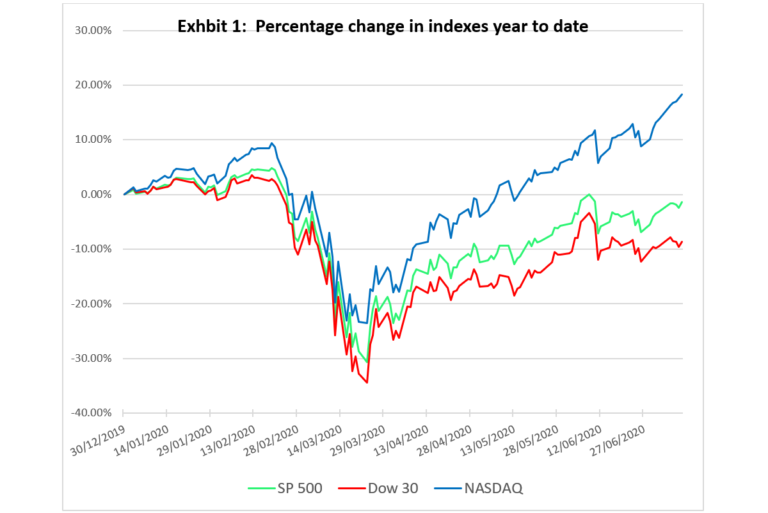 The current earnings reports that begin rolling out this week will be among the most important since the financial crisis, if not even before that.  To explain why, let us start with some background data.  Exhibit 1 plots the three major stock market indexes from the start of the year through the close on July 10, 2020.  Although all three indexes have bounced back from the depths of the Covid crash, there is a marked discrepancy between them.  That discrepancy is due to the fact much of the recovery from the low point can be attributed to a relatively few big tech stocks that rose dramatically.  Although the great majority of stocks have fallen year to date, some of the biggest tech companies have risen enough to pull up the indexes.  The Dow lags because it contains fewer tech companies and because it weights them less than their market value. 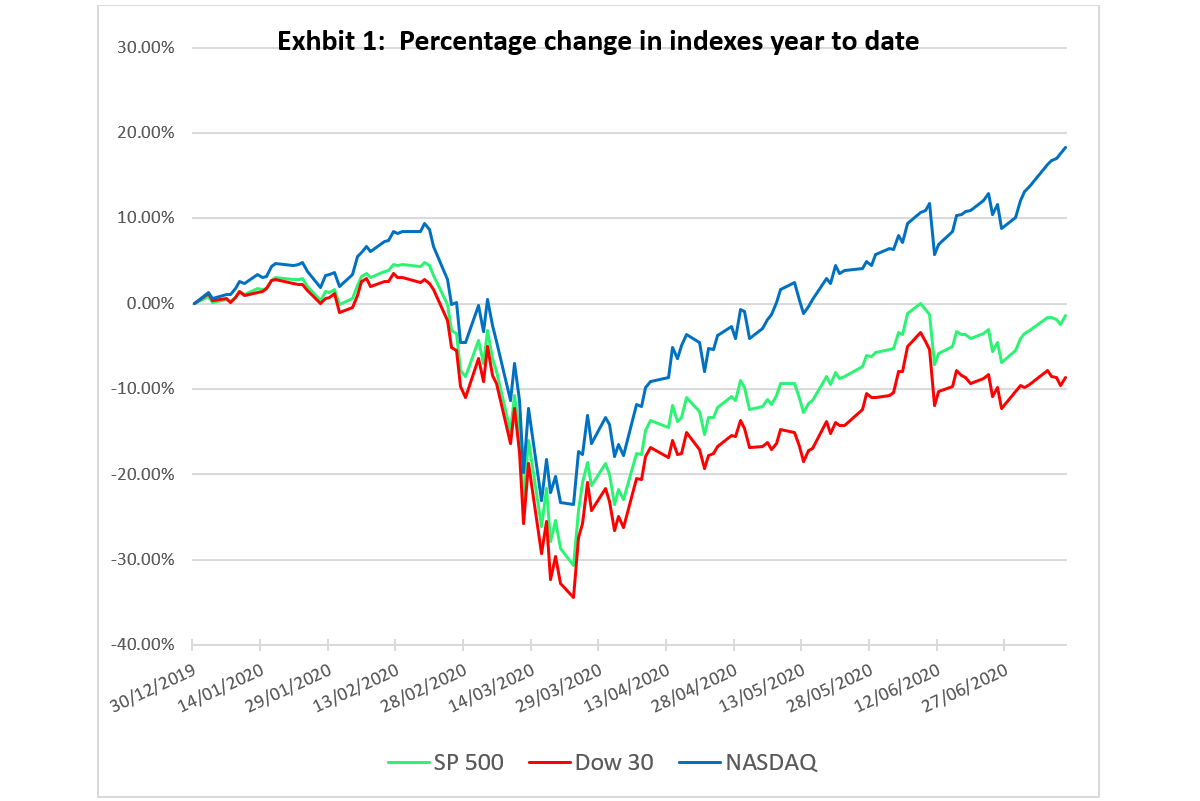 As evidence of what happened, Exhibit 2 displays data on the performance from the start of the year through the close of the market on Friday, July 10 of ten of the largest and most high-profile tech stocks.  As the exhibit shows,  all ten stock rose, many of them dramatically, as the economy fell into recession and unemployment jumped.  In total, the ten companies added over $2.3 trillion in market capitalization as the economy declined.  The average price increase was a whopping 106%.  The P/E ratios of the ten ranged from high, particularly given the size of the companies, to remarkably high, to undefined because the company had negative earnings on a trailing twelve-month (TTM) basis.  I use TTM because forward forecasts have not been earned yet and my never be earned.  The only rational explanation for such dramatic price increases in the face of growing hardship is that these ten companies would be beneficiaries of an economic transformation that Covid is accelerating.  However, this begs the questions of how much in the way of price increases such a story can rationalize and whether the companies can deliver on the implicit promises in the form of greater future cash flows.  And needless to say, price increases such as the 269% rise in Tesla, along with a market cap of nearly $300 billion without a full year of positive earnings, require some pretty remarkable future performance. 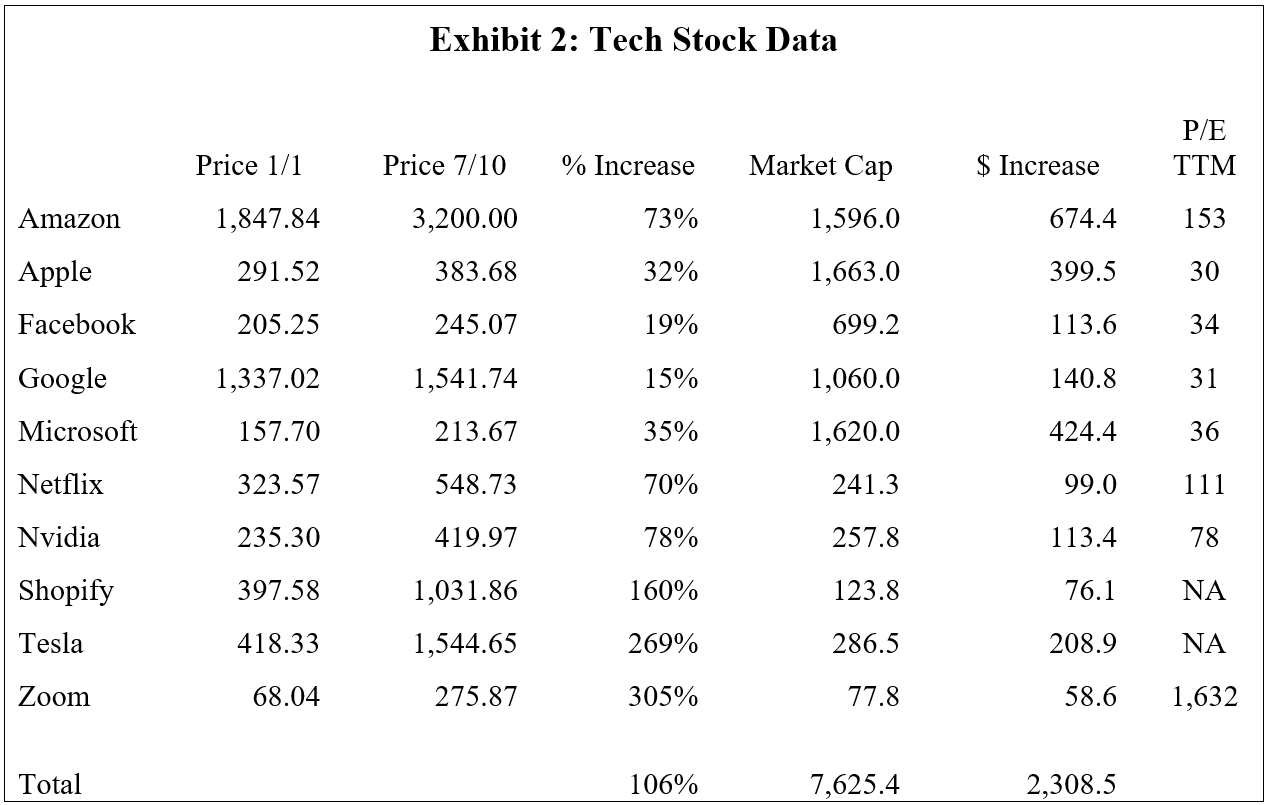 All this leads back to the current earnings season.  Enthusiasts for investing in the ten companies have been “talking the talk” and the market has responded.  Now it is time to see if the companies can “walk the walk” in the form of delivering anticipated earnings.  Admittedly, one quarter’s results can only provide so much information, but as quarters go this one should be a humdinger.

It is often claimed that the market’s attention to quarterly earnings is evidence of short-termism, but that criticism is misguided.  There is no release of “long-run” information.  Companies keep their long-term plans confidential, as they must for competitive reasons.  All the market gets in the way of hard data is a sequence of quarterly financial reports.  That is the information the market must use to develop its long-run outlook.  When the quarterly information deviates from what was expected, it is not irrational for investors to reconsider whether their long-run expectations might also need revision.

Given the nosebleed prices of all ten companies in Exhibit 2, the market’s long-term projections for each of them must be extremely optimistic, if not irrationally exuberant.  But irrational exuberance is hard to maintain if the hard data fail to support it.  As Rob Arnott of Research Affiliates said in a recent interview on Bloomberg, “the market is skating on a knife edge.”  The upcoming earnings season may well determine whether the market can keep skating.