ValueWalk
Home Business Another Climb of the S&P 500 Wall of Worry Approaching? 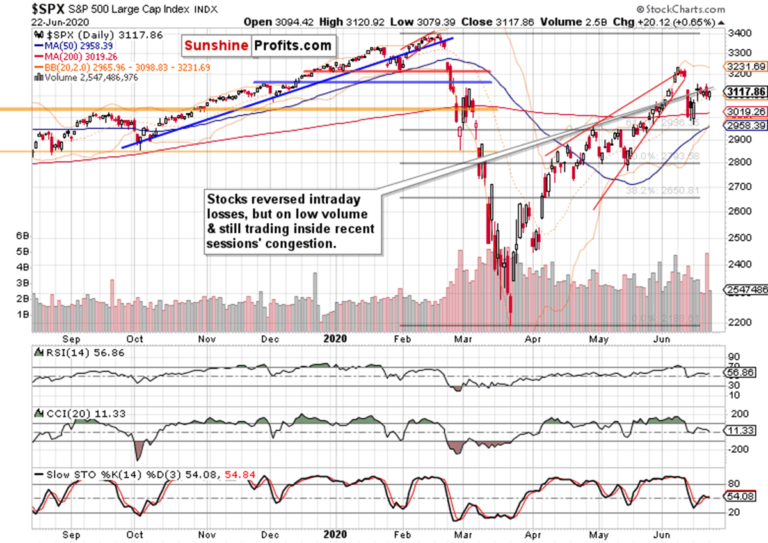 Monday’s session brought us the anticipated downside, but stocks reversed to close solidly higher. Has this been it, and the train is ready to leave the station now? The overnight dip shows it might not be a foregone conclusion, but let’s take it step-by-step. 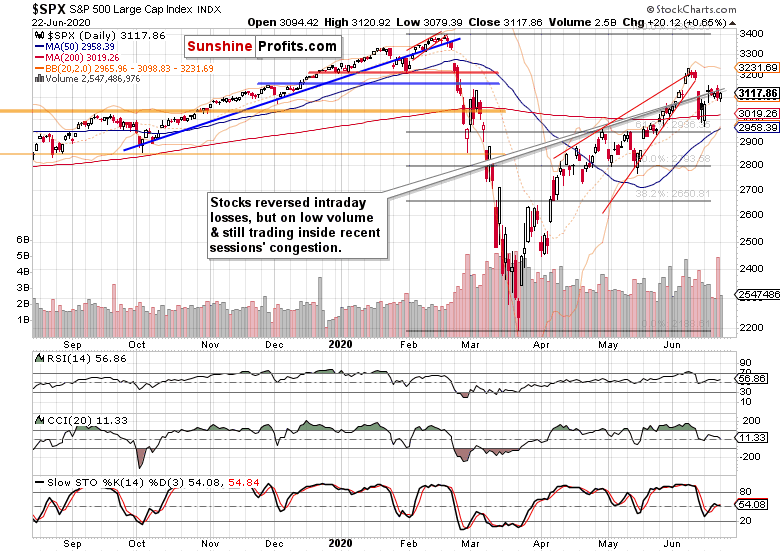 Poof, the overnight bearish gap turned pretty quickly history as stocks climbed higher throughout both the Asian and European session. It's been only the entry to the U.S. regular trading that tried to reverse some of the preceding gains.

The bulls had their way though, and the closing bell came close to the intraday highs. So far so good for the bulls, but yesterday's volume hasn't been really convincing. While the price action was constructive, the daily indicators aren't clearly pointing either way in the short run.

The Implications Of The U.S. - China Trade Deal

It was the aftermarket trading that showed us just how vulnerable to a takedown these momentarily lofty levels are. Incidentally, this is what I've been answering within the yesterday's question on $DAX:

(…) Fundamentally, much depends upon how the U.S. – China trade deal and globalization sentiment (supply chains reset) goes – should these tensions go into overdrive, export-dependent Germany with its stock market would suffer.

Given the fragility of the stock advance (its sensitivity when one of the key narratives rears its head), let's recall my yesterday's thoughts on where further stock gains would come from:

(…) While the central bank's engine is sputtering in the short run (remember those implied calls that the fiscal policy has to step up to the plate? What chances does Trump's $1T infrastructure bill stand vs. the Democrat's $3T wish list?) and election uncertainties will creep in increasingly more, it's the real economy's actual performance that will be driving further stock gains. Along with the earnings recovery (also note that so many stocks are trading below their book value currently).

It will be a bumpy ride.

And it's proving to be so – just wait for another surprising development.

(…) But can the Fed be tightening here? After the hockey stick since March? I see it rather as a trial balloon – will anything start to disintegrate? It's not in their (and their mandate's) interest to try to do that too hard.

(…) I fully expect the balance sheet to keep on expanding throughout this year – given the fundamental circumstances we're in, it can't really be any other way.

Let's come back to the daily chart and check the confines of yesterday's trading when it comes to Tuesday's intraday extremes. Yesterday's session marks the fourth of such sessions in a row, that didn't overcome either the Tuesday's intraday high or low. We'll get a break out of the range on a closing basis quite soon, I think.

What would the credit markets say about the break's direction? 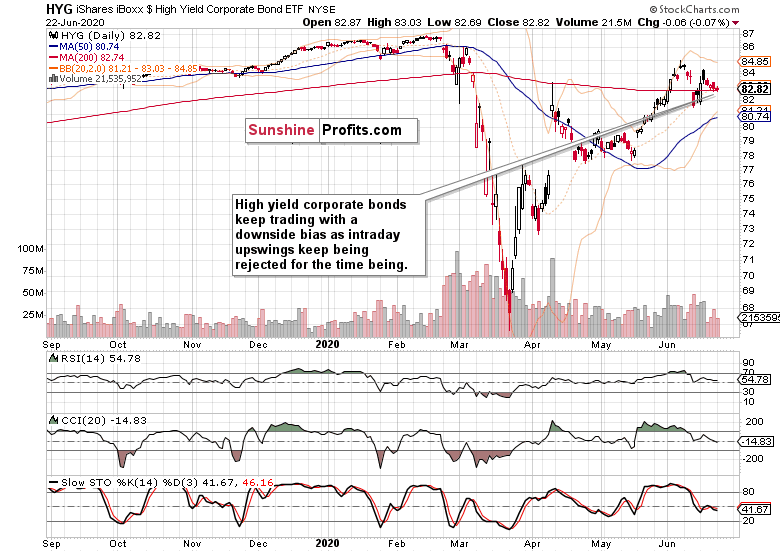 Its daily indicators are still directionless, as neither the bulls nor the bears have made a decisive move either way. The only thing that is true today more than it was yesterday, is the observation that the pace of the decline has moderated. 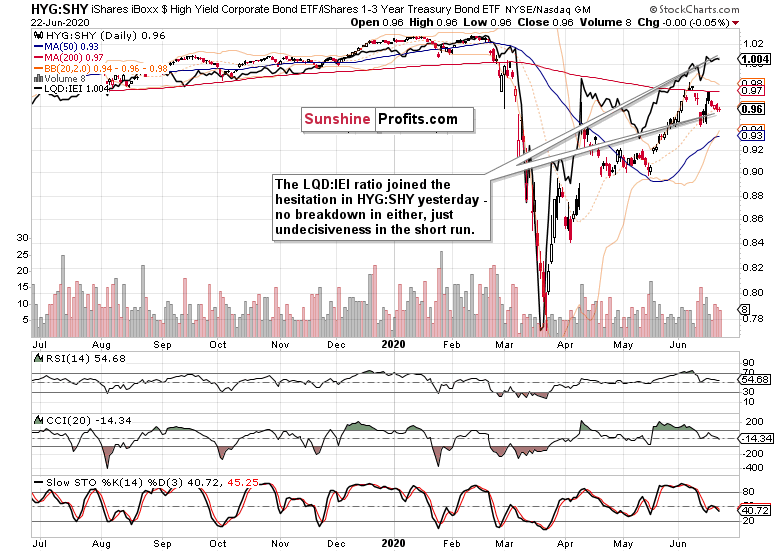 Investment grade corporate bonds to the longer-term Treasuries (LQD:IEI) ratio turned slightly lower yesterday, but still held up better than the high yield corporate bonds to short-term Treasuries one (HYG:SHY). The indecisiveness in both is a short-term non-confirmation for the upswing we've seen in the S&P 500 yesterday – so, how extended stocks got, relatively speaking? 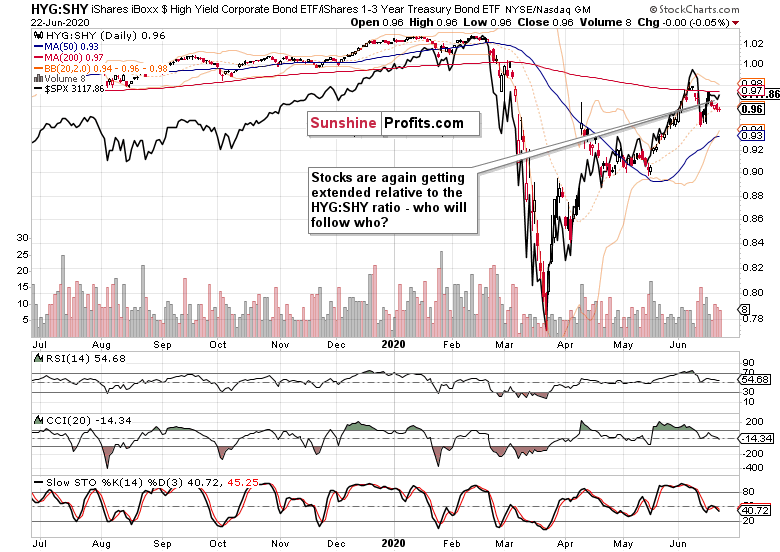 Yesterday's S&P 500 uptick really sticks out (pun intended) on a short-term basis, and the only question is whether the corporate credit market metric(s) would catch up by moving higher today, or whether stocks would give up some of their yesterday's gains or today's premarket runup (they're trading at over 3140 as we speak).

By the shape of their price action, the latter appears more likely – i.e. bonds would follow higher. That would be consistent with the market not really buying the Fed's weekly tightening, and instead expecting the punch bowl to return pretty soon. I also think that the Fed will be back to this year's business-as-usual before too long. But it tells you something when the markets are disregarding their actions this soon.

What about volatility, what picture does it paint?

After Friday's rise, the volatility metric ($VIX) declined again on Monday, with the key question being how far its downswing attempt can progress over the coming days. Can it take on the early June lows still this month? I don't think so – I rather see approximately this much elevated volatility in the short-run.

Q: I read an article dated Oct 2019 written by Felix Zulauf predicting a crisis in ‘20. European banks are now announcing they are part of the solution during this crisis. However the bank stocks are still low comparing to other sectors. Do you think they will accelerate November December as well despite the fact the interest rates are being kept low? (Most of them cut dividend “temporary”...

A: I agree that corona has been a catalyst for the recession, sorry (mini-)depression. The outcome depends really on central banks' actions. Please remember that much of the cascading corona impact hasn't hit us fully yet (we're being shielded from that so far to quite an extent) – while pre-corona I thought that the next crisis would arrive from emerging markets and didn't totally exclude eurozone, now the flash point can come from almost anywhere.

Take a look at this sign of the times, dating back to April 17, when the IMF has announced that more than 100 countries are seeking its help. Or this yesterday's admission as to the UK's challenges.

Financials as a sector will accelerate to the upside as the stock bull market grows more mature – now, they just have plenty of scope to catch up when they're ready to do so.

A: Neither the stimulus bills, nor the Fed's support comes in predictably – as in "I can count on that to happen as sure as night follows day, like clockwork, this week". So will the recovery come in its own fits and starts – as a minimum, that's how the market will perceive (and discount) that. Technical analysis has been and is a valuable tool, if you know how to use it and integrate its lessons into the world around you.

A: NDX scares me the most as it keeps on poking ATH non-stop with only minor retreat even when SPX retreats a lot. At some point, I am afraid NDX will have a big correction and, when it does, it will drag down everything else with it big time. How do you see NDX keep going up nonstop without a significant correction. Does it concern you at all?

Q: The big correction in Nasdaq and technology (XLK ETF) can come from higher levels than we have currently. The charts are primed to go higher long-term but I agree that a healthy correction (can take shape of a protracted sideways consolidation too) is desirable for every bull market's health.

A: Why would there be a bear market with improving economic indicators?

Q: It depends upon the market's expectations and data / events interpretations, if it won't get disappointed by what it sees. The economic indicators won't be improving in a straight line either, but viewed from today's perspective, this calls for rather a correction and not a full-fledged bear market in stocks.

Summing up, the risk-on sentiment reasserted itself pretty quickly, even without much in terms of credit markets' support. On one hand, it's a sign of potential leadership in the short-term, and a cautionary sign on the other. Certainly, the S&P 500 remains vulnerable to a short-term steep slump as the aftermarket session has shown. The $VIX reveals that volatility might not have calmed down just yet, and the prospect of a more bumpier ride ahead for the bulls over the summer, remains on. Time to continuously assess whether stocks are or aren't getting ahead of themselves relatively speaking, and expect more risk-off environment in the weeks ahead. Right now, they are very short-term extended.