History doesn’t repeat itself: as the old saying goes, it rhymes. The last two weeks have rhymed with the late 1960’s, as we’ve had racial unrest and manned rocket launches at the same time.

This time the manned rocket launch was by a private company, Elon Musk's SpaceX; the astronauts were driven to the launch pad in a Tesla Model X. Ten days later, shares of Musk's car company headed for orbit, breaking the $1,000 barrier on June 10th.

Time For Tesla Bulls To Hedge

Now it's time for Tesla (TSLA) shareholders to hedge. I don't say this because I'm bearish on Tesla - I'm not. My system estimates a positive return for the stock over the next six months, and Tesla has been one of the top 10 names on its cash substitutes list since early March.

I say that because the stock's nearly tripled since the March low.

The last time it made a similar move,

It gave more than half of those gains back.

Opportunistic hedging can make sense with a stock that's had this kind of roller coaster ride.

I tried hedging 200 shares of Tesla against a greater-than-20% decline over the next several months two ways: ones with optimal puts (uncapped upside) and once with an optimal collar (capped upside).

On Wednesday, if you scanned for an optimal put to hedge Tesla against a >20% drop over the next 6 months, you would have gotten this error message. 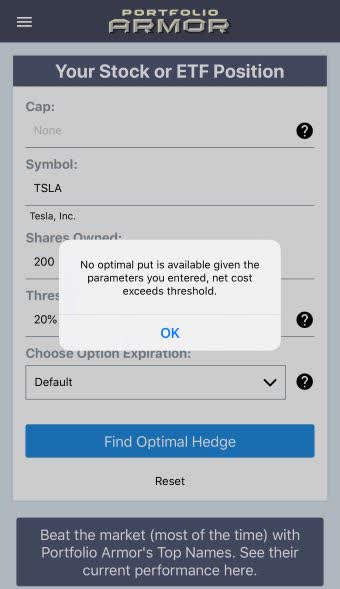 What "net cost exceeds threshold" means is that the cost of hedging against a >20% decline was more than 20% of your position value. So, by buying that hedge, you would have incurred more than the loss you were looking to prevent.

If you were willing to cap your possible upside in Tesla at 7% over the next six months, this was the optimal collar to protect against a >20% decline over the same time frame. 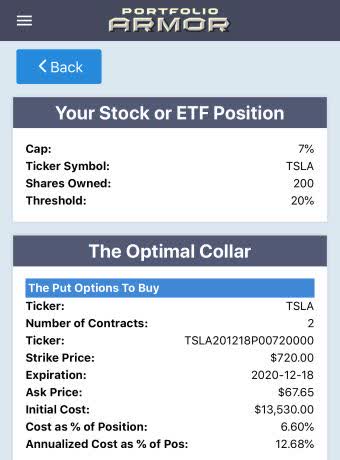 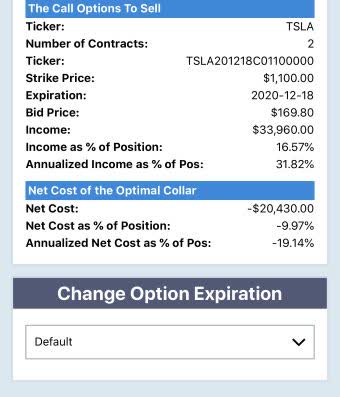 Here the net cost was negative, meaning you would have collected a net credit of $20,430, or 9.97% of position value, when opening this hedge, assuming, conservatively, that you bought the puts and sold the calls at the worst ends of their respective spreads. That worked out to an annualized cost as a percentage of position value of -19.14%. Taking into account the negative hedging cost, your maximum upside over the next 6 months was 7% - (-9.97%) = 7% + 9.97% = 16.97%.

When Tesla Pulls Back

If Tesla pulls back within the next few months, you'll be able to buy-to-close the call leg on the collar above for a lot less than you got for selling it, and you'll be able to sell the puts for a lot more. If you're still bullish on Tesla then, you sell those appreciated puts to buy more shares.