“I had no clue what I was doing…” That was Alexander Kearns’ last words scribbled on a suicide note. During the pandemic, the 20-year-old investor signed on to Robinhood’s app and began trading options, a complex investing instrument that promises “easy profit.” Worse, he upped the ante with borrowed money called margin.

Fast forward to June 12, the would-be investor run up $730,165 in debt (or so he thought) and took his life. This story may be the most tragic, but it’s not the only one.

More and more young investors are blowing their life savings on Robinhood. And as I’ll explain, they all share two things in common that may be screwing up a freshly-minted generation of investors.

Investing Has Become A Game

There has never before been a time when trading was so cheap and so easy.

Take Robinhood, America’s most popular investing app. In minutes, you can set up an account and trade everything from stocks to futures and even complex leveraged instruments. For free!

Not only that, Robinhood was designed to make trading seem fun. Its dumbed down app was supposed to educate and make investing more accessible to young investors. But all it’s done is convince them investing is a mere game.

In fact, speculating in stocks has become so entertaining that even 10-year-olds are putting games aside to trade. Get this:

All this has turned the new generation of investors into a hoard of “day traders” who cluelessly dabble in complex and risky investments.

A lot of them make rash investment decisions based on rumors or “investment advice” they find on Reddit, or Twitter, or even Tik Tok. Hell, some of them appear to be be picking stocks almost randomly.

Ever heard of the little-known Chinese real-estate firm (DUO) that shot up 300% out of the blue? Well, it happens that the company had “fangr” in its name and Robinhood investors mistook that for “FAANG” stocks.

They bought the stock in bulk thinking they were buying a basket of America’s biggest tech stocks and drove its price to the moon.

Or remember when oil crashed below zero? Everyone scrambled to pick up every fund with “oil” in its name. United States Oil Fund (USO), America’s largest oil fund, became one of the most popular buys among Robinhood investors.

Little did they know, oil funds like USO don’t even hold oil. They also don’t consistently track oil’s price over the long run. And yet many investors bought these funds thinking they were buying crude oil.

They are FOMO trading, not investing 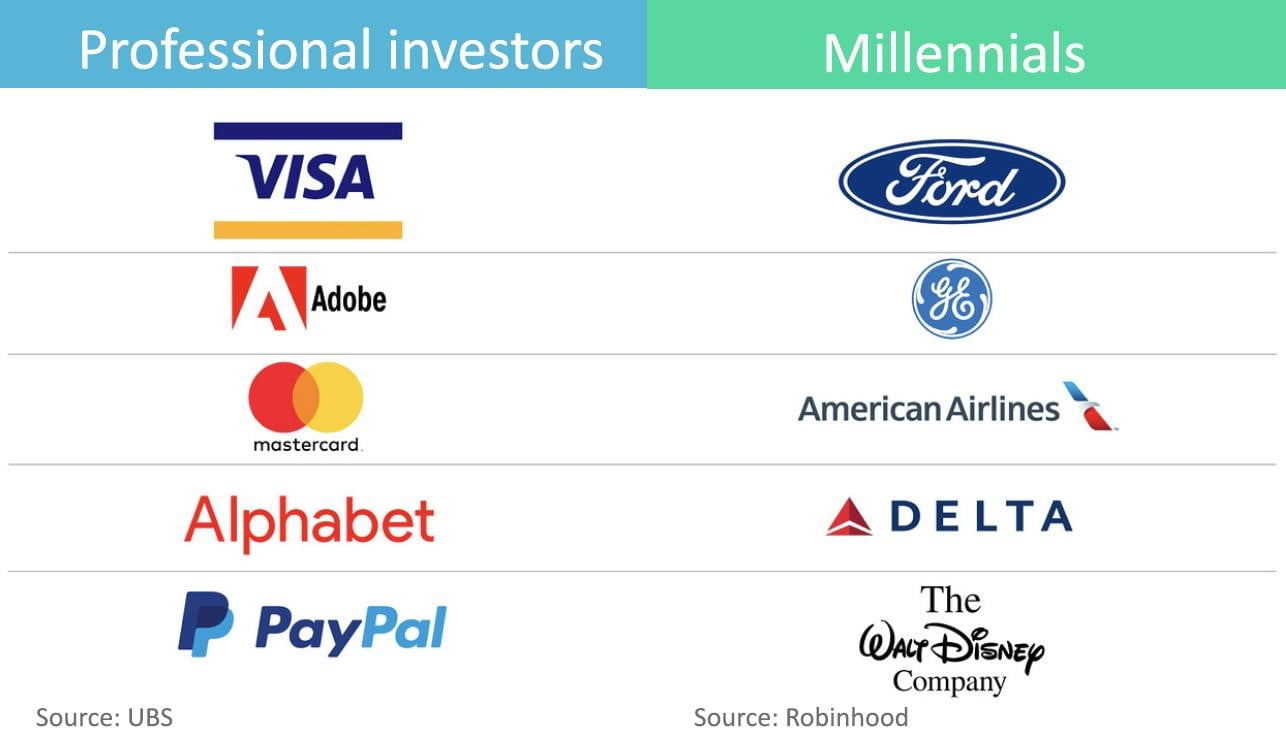 While professional investors buy companies with healthy balance sheets and strong growth prospects, millennials bet on stocks that have lost the most value. Four out of five millennials’ favorite picks are outright FOMO speculation on stocks beaten down to death.

Look, it’s fine to invest part of your portfolio in riskier stocks, especially while you’re young. But I’ve got a hunch most millennials do nothing but flat out gamble.

In fact, day trading—the most speculative kind of investing—has never been more popular than it is today. Google’s data shows a record number of people are looking up this term, as you can see below:

Meanwhile, most millennials fall largely behind in retirement savings. Six out of 10 of them don’t contribute a penny to retirement plans, according to Insured Retirement Institute.

That means most in this generation are sitting with portfolios full of ticking time bombs—with few stocks that will lay the foundation for their financial futures.

Traders earning fortunes overnight make a good story on social media. Truth is: 99% of the time it’s a hoax.

And if someone pulls it off, it’s not the result of their talent, or some “secret technique.” It’s a fluke.

But social media takes this fluke and turns it into sheer genius. A success story the whole generation looks up to. And millions of young investors bet their life savings on highly speculative investments — and lose money.

There are many, many more investors who grew rich without risking their necks. Take Herb Wertheim, who steadily grew his wealth to an astounding $2.4 billion by investing in strong technology stocks for the long term.

Herb is one of the world’s greatest investors who can teach us all a lot about investing. And yet nobody talks about him.

Because he’s not a good story. His course in life is one of hard work and patience. There’s no rock ‘n roll and flashing Lamborghinis in the driveway.